US futures for the Dow Jones, S&P 500, NASDAQ and Russell 2000 wobbled on Thursday, as European shares declined, tracking Asian markets which all closed lower. The fact that life—and global economies—may not be snapping back to pre-coronavirus norms seems to now be weighing on traders, after Fed Chair Jerome Powell said yesterday that the current outlook right is “highly uncertain and subject to significant downside risks.”

Investors fled to safe havens overnight: the dollar, Treasuries, gold and Bitcoin were up. Oil surged on a multi-percent level.

This morning, US futures replicated yesterday's pattern, attempting to push higher despite losses in Asia and Europe. 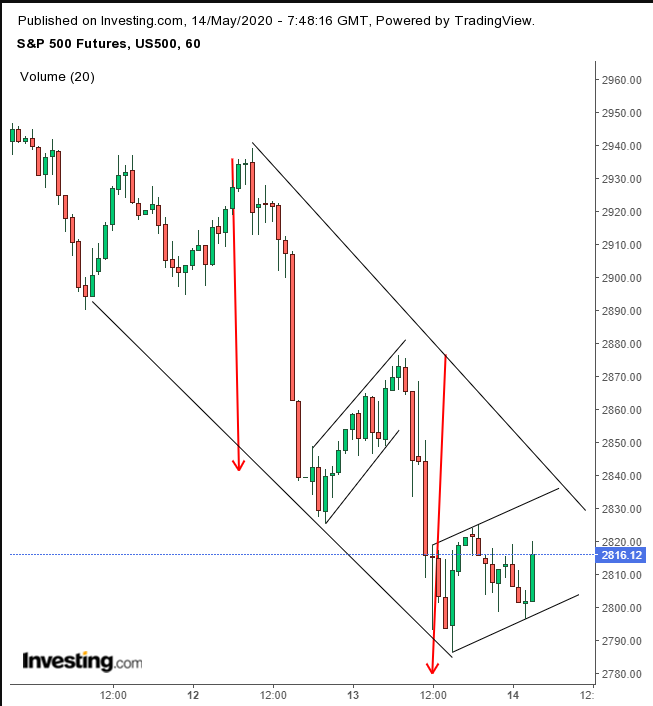 The supply-demand balance shifted from one-sided optimism that economies were reopening and a V-shaped recovery was on the horizon, to evidence-based pessimism after Fed boss Jerome Powell warned that the economy will likely continue to shrink without additional government help.

Futures on the S&P 500 were up earlier this morning, but at time of writing had turned lower. We expect them to continue a decline, in its back-to-back hourly rising flags.

Automobile makers and the technology industry pulled down the Stoxx Europe 600 Index. From a technical perspective, the pan-European benchmark is fluctuating—flipping above and below the dividing line between bulls and bears, forming the neckline of a H&S top. Trading volume has been deteriorating with each rally within the pattern, while rising along the dips, creating a mirror-image to the price action and demonstrating where the power is.

This negative divergence can also be seen via the longer-term price action: when prices collapsed because of the COVID-19 scare, volume spiked. But since the dead-cat bounce in March, volume has been collapsing, therefore not supporting the price advance. As well, the RSI and ROC are breaking down, and the MACD is turning into a bearish signal.

Asian trading flashed bright red across the digital boards earlier Thursday. India’s BSE Sensex 30 underperformed, (-2.7%), giving back almost all of yesterday's gains. While the Indian benchmark provided today's worst performance in Asia session, it remains positive over the past two days, + 0.1%, which is much better than the losses endured by other regional indices.

During Wednesday's New York session, US equities fell to a three-week low. The S&P 500 lost close to 2%. 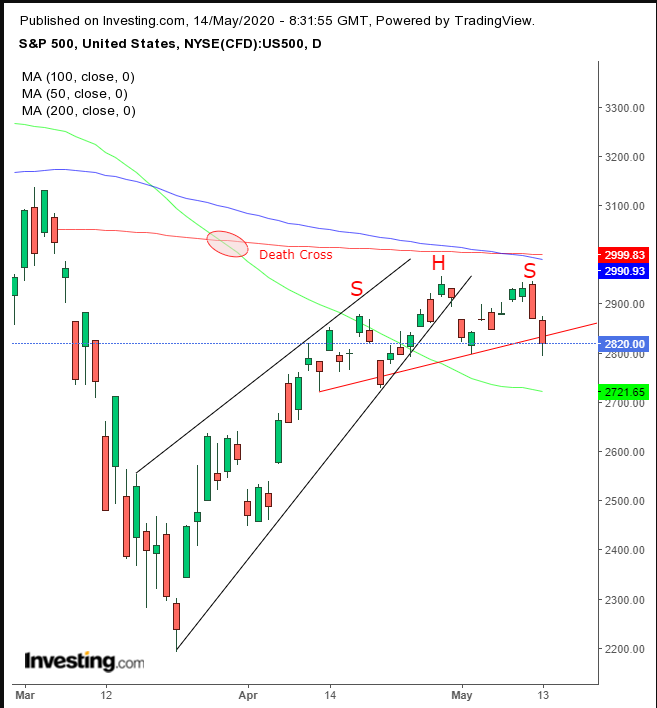 The US benchmark dipped below the 2,800 support, its lowest level in almost a month. The index still completed a H&S top, after completing a rising wedge. However, the downside breakout is miniscule, a classic setup for a bear trap. Proceed cautiously. 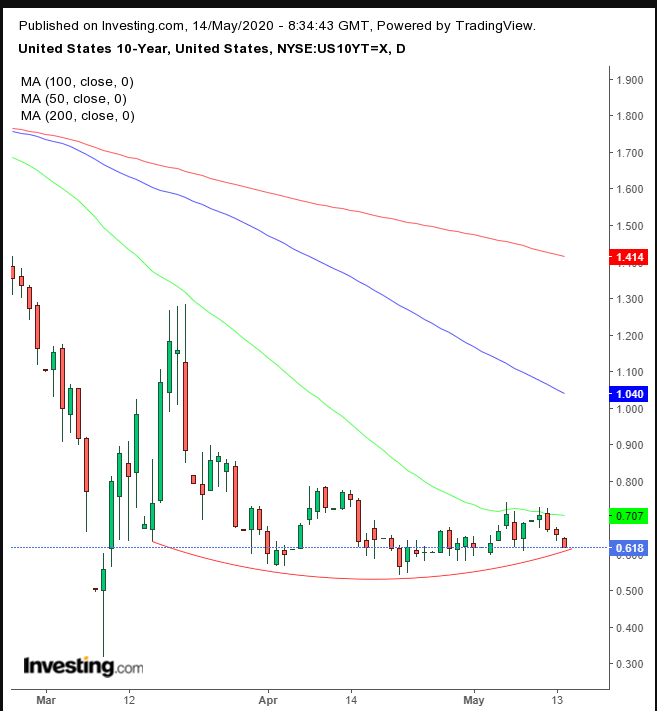 The 10-year US Treasury rose for the third straight day, pushing yields to a month-long rounding support. 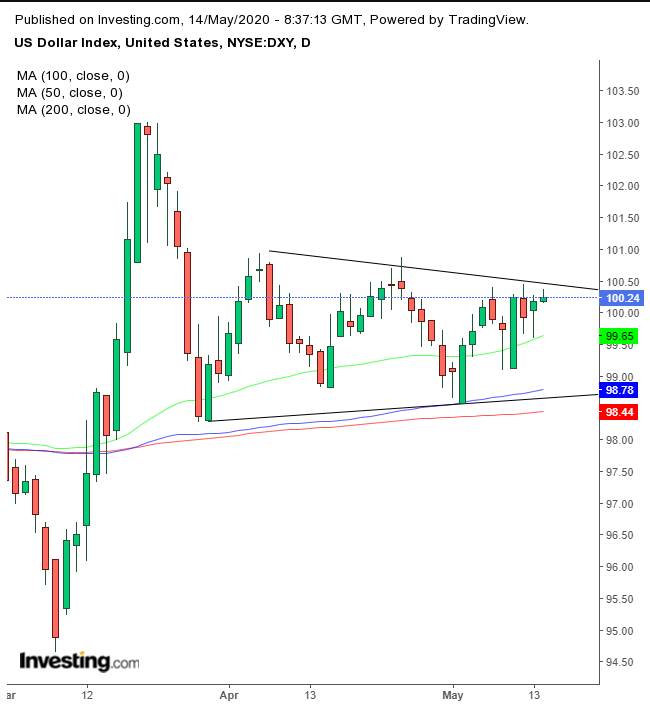 The USD is pushing against the top of a range since late-March. An upside breakout would demonstrate that buyers are increasing their bids to find new, willing sellers above the prices within the pattern.

Gold broke through the topside of a pattern that can be interpreted in a variety of ways. 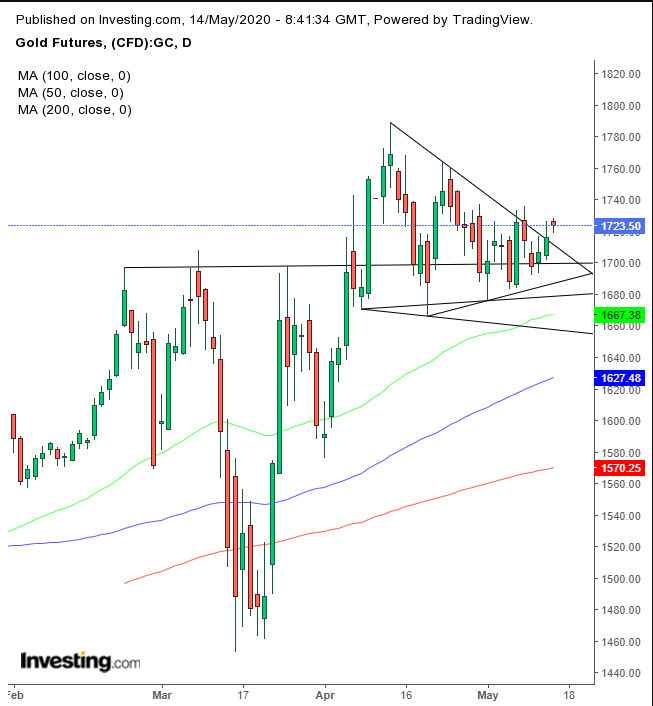 It could be viewed as a descending triangle, a pennant or falling wedge. Whichever it is, a sustained upside breakout would both be a bullish signal in its own merit, compounded by confirmation to the H&S continuation pattern that preceded it.

Bitcoin is above its falling channel since the June top, for the second time since last week. 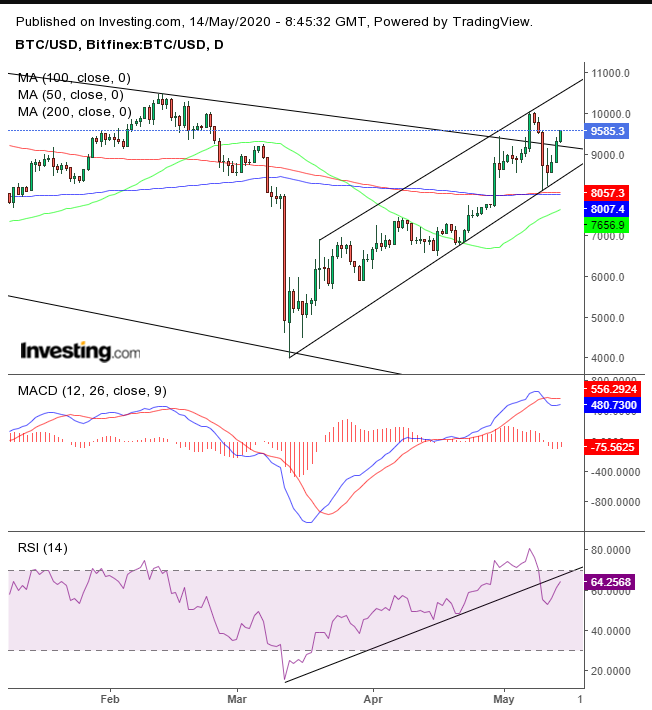 Nevertheless, the cryptocurrency remains within the rising channel since the March bottom. Both the MACD and the RSI suggest the longer channel will dominate.

On its technical chart, crude oil appears to be clawing itself back to where it was before Wednesday’s drop. The price surged to $26.41, up more than 4.0%

Considering how much money investors have lost during the coronavirus thus far, I can't see how there is enough money left for gold to go higher from its current price level. Also, from a technical perspective, the weekly RSI (14) is trading below the 70 - level as well as showing bearish divergence. I'm not saying that gold is going to make a trend reversal - God forbid the perma-bulls here read this - but both fundamentally and technically a deeper correction should be seen prior to price going higher again, at least a re-test of 1650/40.  ... (Read More)