US futures for the Dow Jones, S&P 500, NASDAQ and Russell 2000 climbed on Thursday, along with European shares, on better than expected German consumer confidence, offsetting simmering Sino-US tensions.

Contracts on the major US indices jumped this morning as European trading opened, after having slipped earlier, during the Asian session. Contracts on the NASDAQ outperformed.

The themes that boosted US equities during Wednesday's New York session—a positive outlook over a new government spending bill and apparent progress on a coronavirus vaccine—seemed to have faded this morning, resulting in mixed Asia trade.

Depressed US futures jumped decisively only when the STOXX Europe 600 Index opened higher, cutting yesterday’s losses in half. The German Gfk Consumer Climate survey beat expectations, seemingly confirming the view that Europe’s economic engine is climbing out of the coronavirus pit. Of course, this was likely made easier after passage of the EU's recovery fund earlier this week.

Futher boosting market sentiment: after consumer giant Unilever (NYSE:UL) reported strong earnings in which its sales declined less than anticipated, the stock surged 8.6%. Daimler (OTC:DDAIF) shares advanced after the automaker said it saw the first signs of recovery from the pandemic's devastation, especially with regard to Mercedes-Benz passenger vehicles.

From a technical perspective, we consider the pan-European benchmark’s acceleration today as a retest of Tuesday’s Gravestone doji, the centerpiece of an Evening star.

South Korea’s KOSPI underperformed, (-0.6%), as the country fell into a recession in the second quarter. The gloom was exacerbated by escalating Sino-US tensions darkening the path to a recovery.

China’s Shanghai Composite, on the other hand, merely edged lower, (-0.2%), closing near the top of the session. Some profit-taking after a four-day rally demonstrates that, unlike regional peer's Chinese investors aren't especially worried by Washington's diplomatic spat with Beijing. Japanese markets were closed for the Marine Day holiday.

Yesterday, US equities advanced for the fourth day. Traders rode the optimistic themes higher, even while averting their eyes from the lingering diplomatic tiff with China, the US's biggest trading partner. 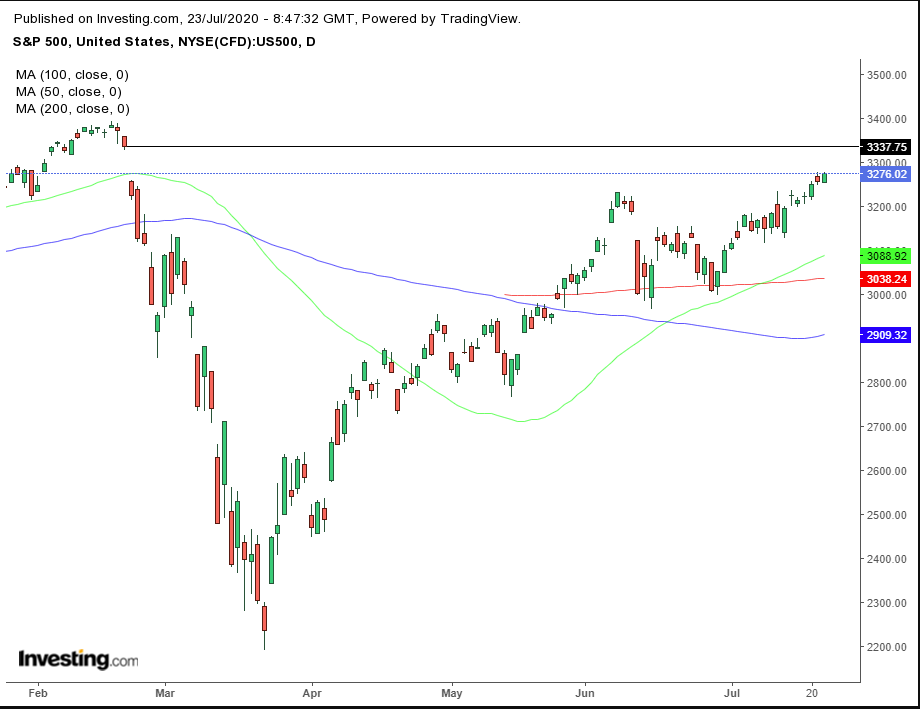 The S&P 500 Index jumped to a five-month high, yesterday after news broke that the White House was reportedly considering a short-term extension of the $600 unemployment benefit that's set to expire at the end of July. The benchmark stopped within 2% of pre-COVID-19 levels, where a falling gap looms with its expected resistance.

In contrast to today’s sentiment beat in Germany, with double digit unemployment in the United States, some are seeing a second Great Depression on the horizon, a view shared by noted economist Stephen Roach, who cautioned against the ongoing illusion of a V-shaped economic recovery.

The VIX edged lower, declining to its lowest level since Feb. 21, before its rising gap, formed by trade around the coronavirus panic, extending a penetration of the 200 DMA. 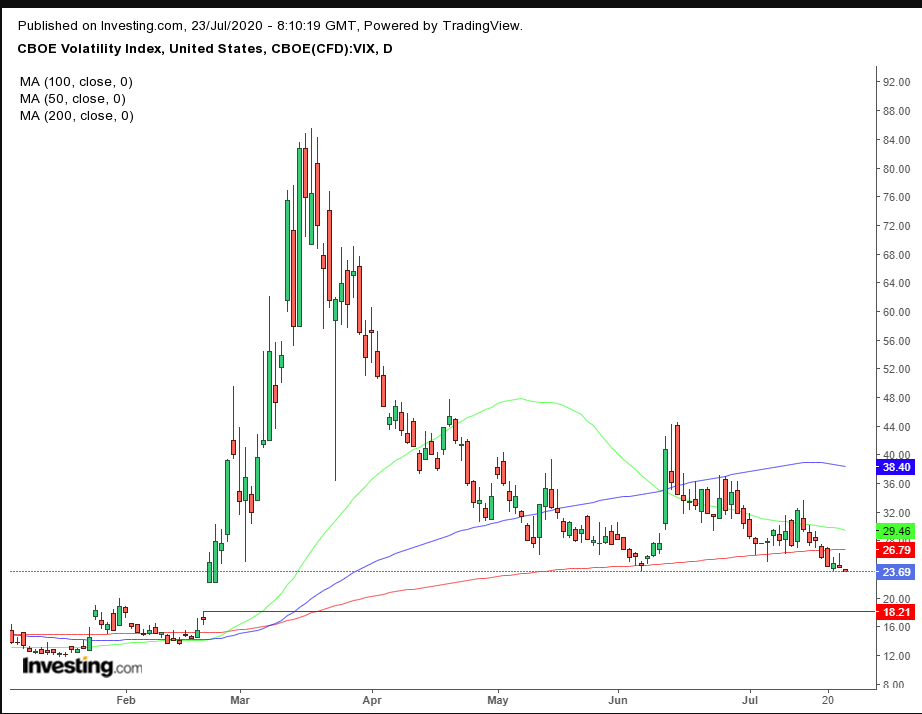 While bullish, it still retests the June 5 intraday low, before it can close the gap.

Yields including for the 10-year Treasury note, fell to their lowest point since Apr. 21. 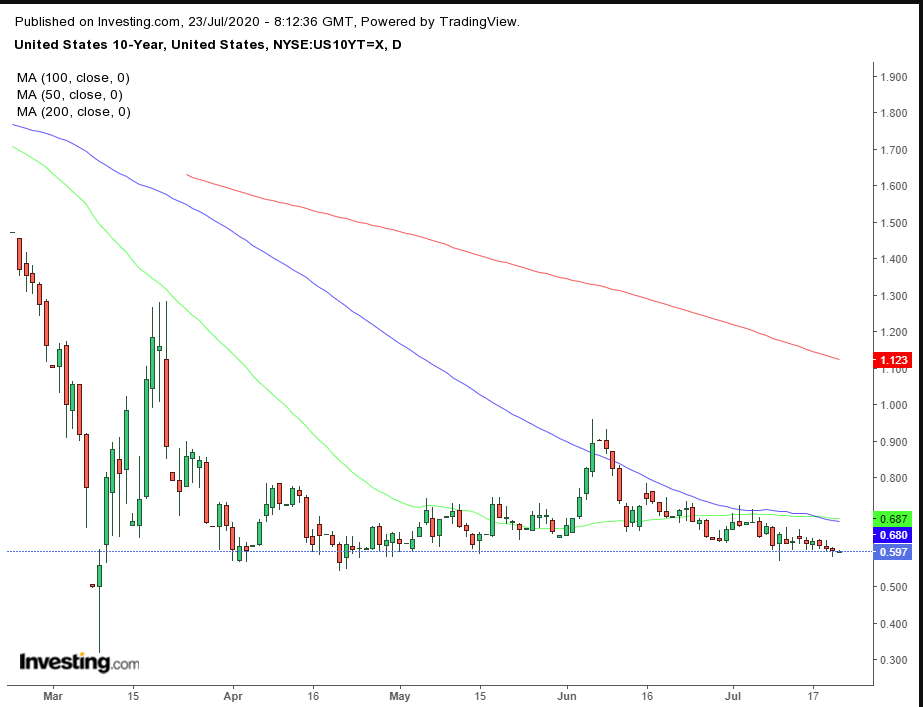 Unprecedented stimulus is weighing on rates.

Falling yields pressured the dollar for the fourth consecutive day. 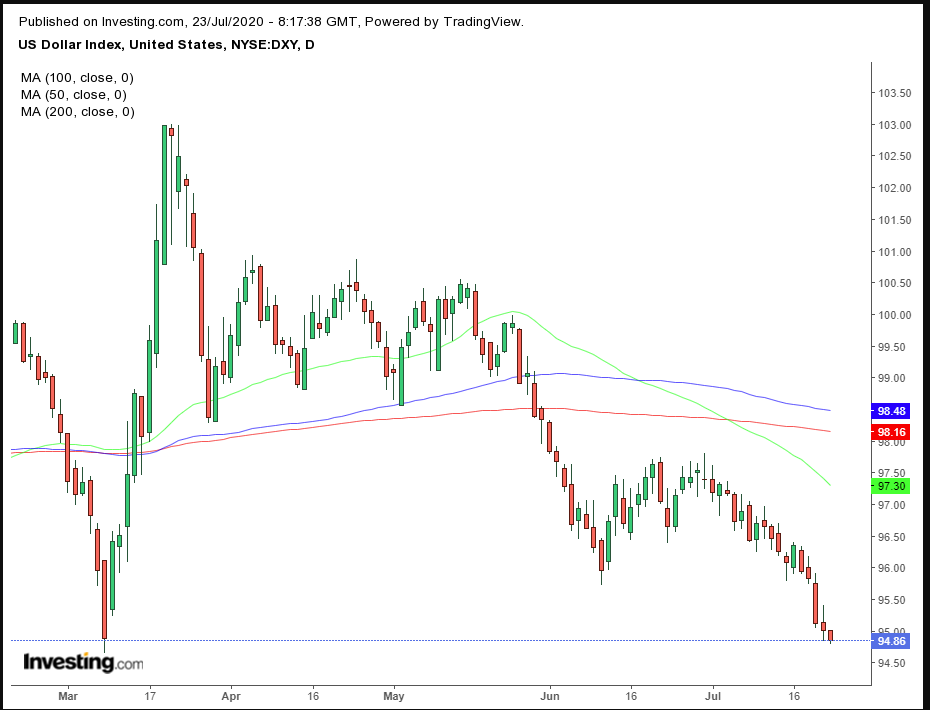 The global reserve currency was at 94.88, at the time of writing, a single pip below the March 9 pandemic selloff bottom, making it the lowest level since Sept. 26, 2018, unless it climbs back one pip.

Strictly speaking, a new trend has been registered, putting the USD in a medium-term downtrend, as predicted by its Death Cross. The dollar remains in a long-term uptrend since the 2008 bottom. However, the March bottom can prove a support.

The weaker dollar continues to provide a leg-up for gold. 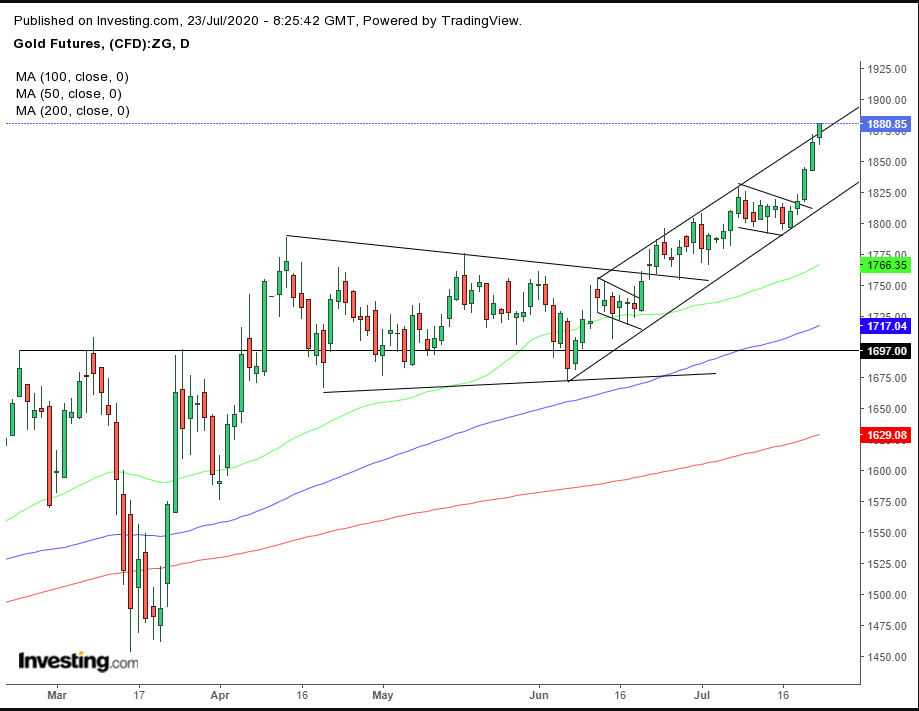 Oil rose for the third day out of four. It's now back above $42 a barrel, retesting Tuesday’s intraday highs. 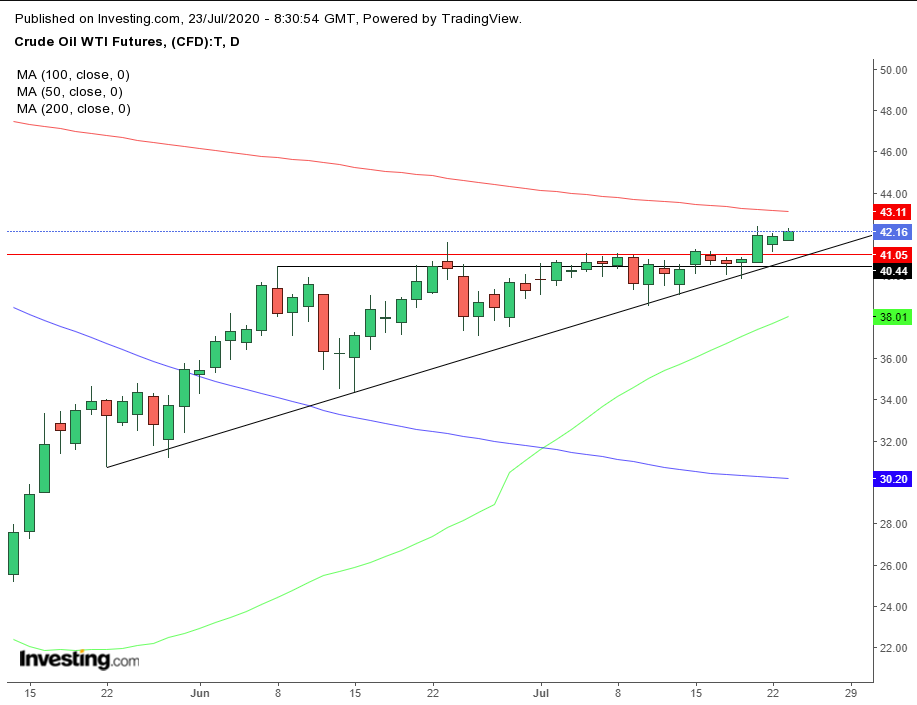 Oil completed an ascending triangle, but still has to cross above the 200 DMA at the $43 level.