US futures, including the Dow, S&P, NASDAQ and Russell 2000 and European stocks tracked most Asian shares higher, extending a rally that is pricing in a stimulus deal.

Late Tuesday, President Trump tweeted his approval for a piecemeal package of small economic aid measures though nothing concrete has yet been agreed to. As well, even if that’s delayed, the new, emerging narrative buoying equities is that if Joe Biden takes the White House in November, and Democrats become the majority in both the Senate and the House, the path will be clear for a massive new stimulus package.

However, stimulus optimism continues to dent the dollar.

On Thursday, contracts on the S&P 500 built on Wednesday’s surge to a six-week high during the New York session, while European indices, including the Stoxx 600, climbed to monthly highs on the optimism, as well as positive corporate updates. The Stoxx 600 was boosted by travel and leisure stocks—two of the industries most impacted by the coronavirus. 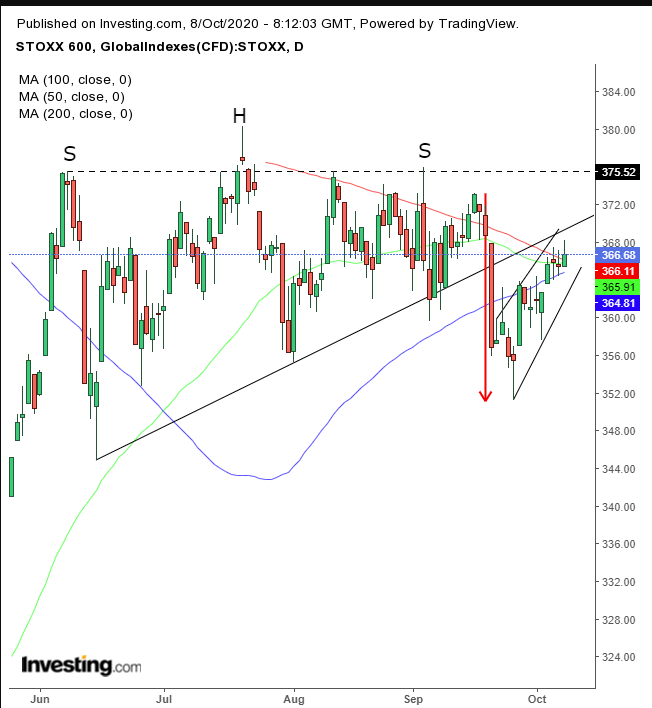 From a technical perspective the pan-European gauge crossed over the 200 DMA, though is till within a rising flag bearish after the benchmark topped out. The index is currently retesting that top.

Yesterday, all eleven sectors of the S&P 500 were up, driving the index to higher by 1.75%. Even the technology sector staged a comeback as traders seemed to shrug off, at least for now, a House panel’s proposal for the biggest antitrust overhaul in fifty years, in an effort to rein in alleged abuses by meg cap tech behemoths Alphabet (NASDAQ:GOOGL), Facebook (NASDAQ:FB), Amazon (NASDAQ:AMZN) and Apple (NASDAQ:AAPL). The big four, which account for more than 15% of the S&P 500, drove much of yesterday’s rally.

Wednesday was a case in point of how volatile markets are becoming. Plus, this could likely continue until after the Nov. 3 US elections.

Yields, including for the 10-year Treasury note, struggled between the 200 DMA and the highs of Aug. 28, to determine the trend. 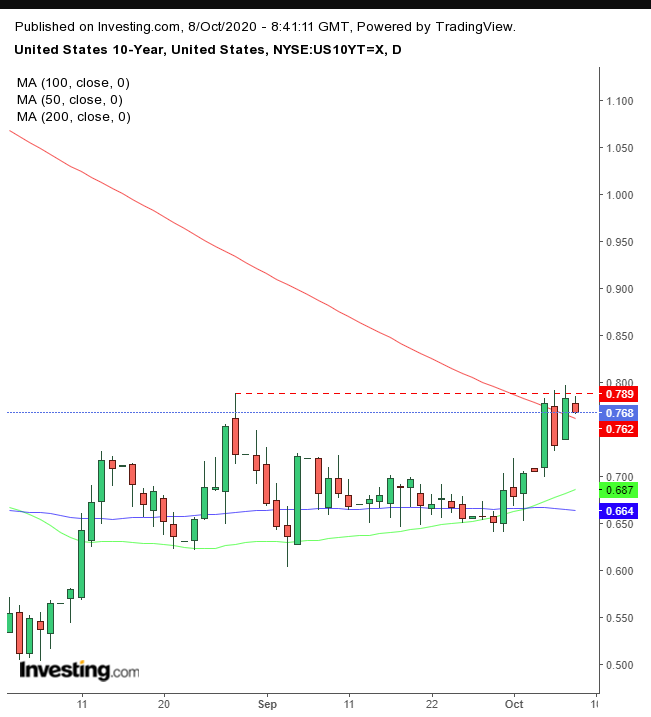 It seems bond traders are also waiting for a resolution on stimulus, which is expected to depress bonds, allowing yields to hover high—if they pass.

The Dollar Index fell on Wednesday, giving up gains as newfound optimism for a stimulus, which anticipates more dollars in the system, would reduce the value of each unit fundamentally and increasing supply technically.

Fundamentally, the dollar is struggling on the constantly shifting news cycle regarding the fiscal package. 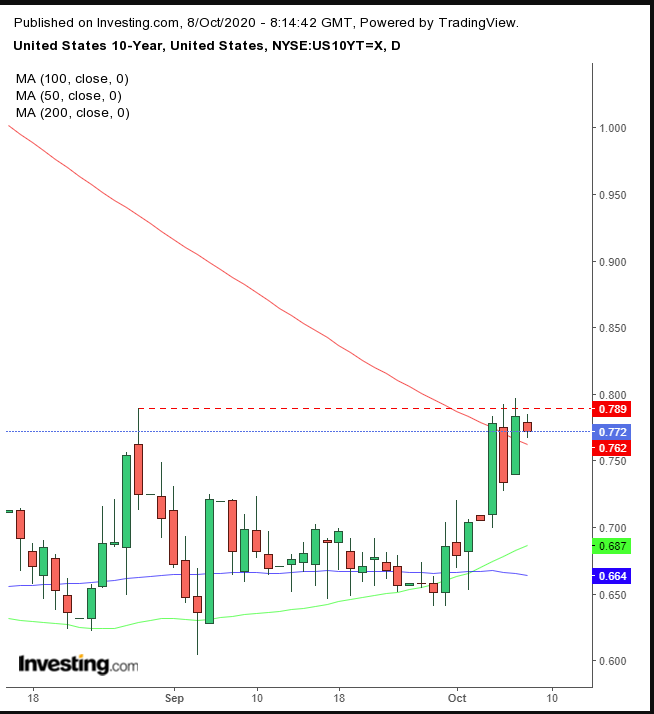 Technically, the greenback is fluctuating between the short-term uptrend, manifested by the bottom forming a rising channel and aided by the 50 DMA, and the medium-term, framed by the falling channel since the March high. 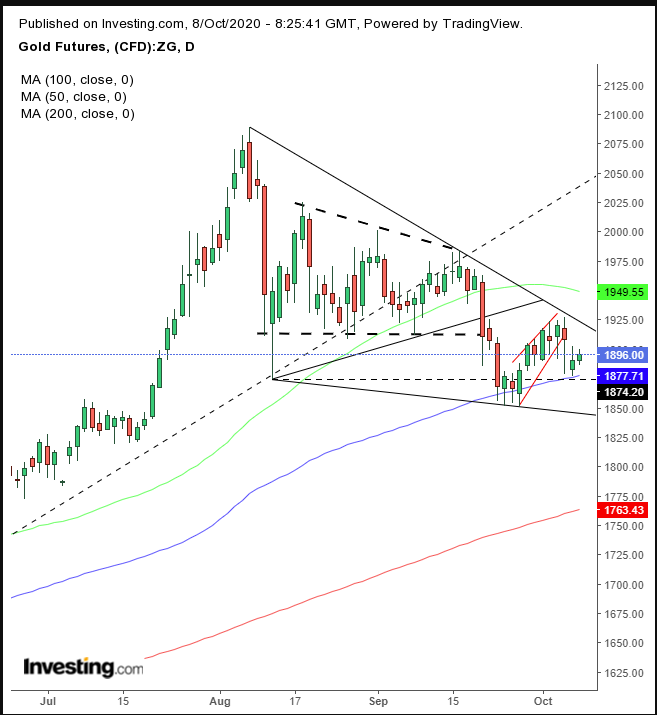 Technically, it continues to wander between potentially conflicting fundamental themes, projected within conflicting technical patterns. The yellow metal may have completed a rising flag, bearish after completing a bearish symmetrical triangle. However, a move above $1,950 would flip market dynamics in the form of a completed bullish, falling wedge.

Bitcoin is being squeezed between the 50 and 100 DMA, forming a symmetrical triangle. 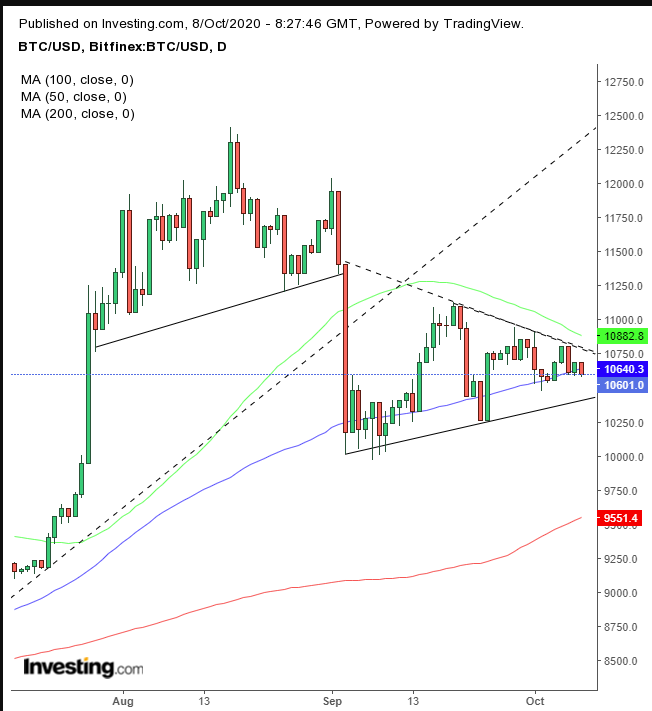 The digital currency is bearish after a H&S top pushed it below its uptrend line since the March bottom.

Oil rose for the second day, moving back above the $40 mark, boosted by the weaker dollar. It's been trading within a range for the past four months as traders look for additional fundamental signals regarding what might drive the price next 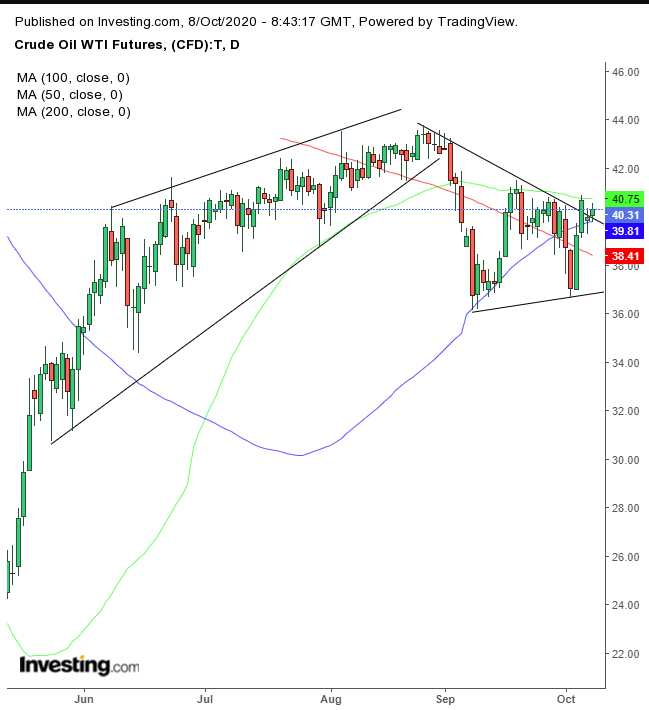 Technically, oil is being squeezed between the 50 and 100 DMAs as it attempts a second upside breakout to what should have been a bearish symmetrical triangle after the bearish rising wedge. Notice how the 50 DMA went from being the wedge’s support to the triangle’s resistance.