So-called oil ‘supply shocks’ have typically led to sustained oil price inflation, doing serious damage to the global economy markets. Will this one?

So-called oil ‘supply shocks’ have typically done serious damage to the global economy. That’s partly because of the impact of higher prices, which inflate the cost of fuel and the myriad products derived from oil, particularly chemicals and plastics.

The other obvious channel for impact is sentiment – both in financial markets and economically. To begin with, some oil-share dominated indices can often seem as if they will benefit. For instance the UK’s FTSE 100 appeared to show some positive early reaction on Monday, given that two out of three of its heaviest-weighted shares – BP (LON:BP) and Shell (LON:RDSa) – rose sharply. They were reacting to weekend attacks on Saudi Arabia’s biggest crude oil processing facility that slashed as much as 50% of the country’s output. However, further into Monday’s session, none of Europe’s top stock indices were rising. 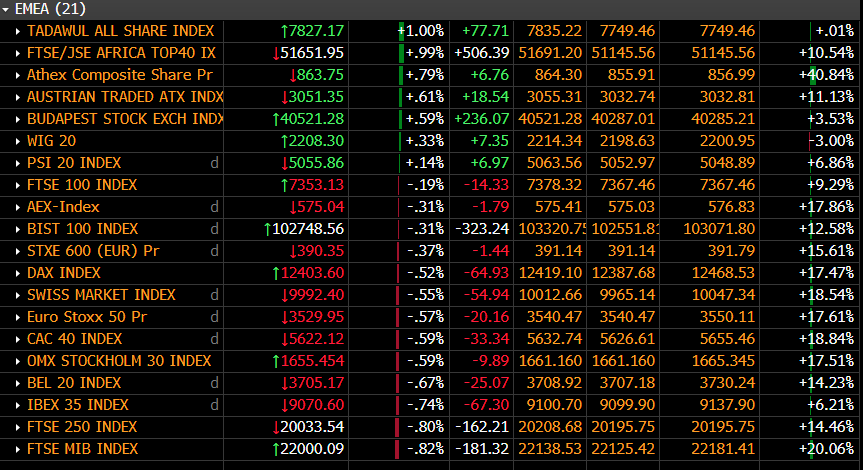 Source: Bloomberg/City IndexDespite a strong lift for oil stocks, which was sufficient to push some eastern European markets into the black, larger, more liquid, higher-capitalisation indices in western Europe with the strongest global links, were all weak.It looks like investors assess the situation as having potential to further weigh on a geopolitical landscape already beset by the slowing global economy, Brexit and trade. That’s partly down to continuing uncertainty about culpability for the attack on the Saudi Abqaiq and Khurais oil processing plants in eastern Saudi Arabia on Saturday. The region is 250km south west of Aramco’s HQ, in the coastal city of Dharan, near Bahrain, yet more than 1,000 km from central Yemen. As such, a claim of responsibility by Iran-backed Yemeni Houthi rebels is widely doubted. Washington sees a higher probability that the attack was launched directly by Iran’s Islamic Revolutionary Guard.Either way, amid existing tensions linked to U.S. sanctions and suspected attacks around the Strait of Hormuz, the main oil tanker passage in the Middle East, the potential that events could spiral out of control.Ultimately, that scenario may point to an all-out military conflict, though it is clear that whilst the risk for the kind of military conflict that would most concern markets has risen, it remains a remote prospect. That said, the extent of potential market impacts is largely dependent on how long the plants remain out of action. The answer to that will go a long way to answering the related question of how sharply oil prices might rise.For now, although both Brent crude and WTI shot higher in the futures markets on Sunday night—Brent traded 20% higher at one point— it makes sense to pay close attention to the proportionate lift that such moves may have on the far more important medium-long-term oil price. After all, oil prices need to remain elevated for a sufficiently extended period of time to begin to feed through any negative and positive financial-market and economic impact.The chart below show monthly cumulative percentage price changes of Brent crude oil going back to October 2005. 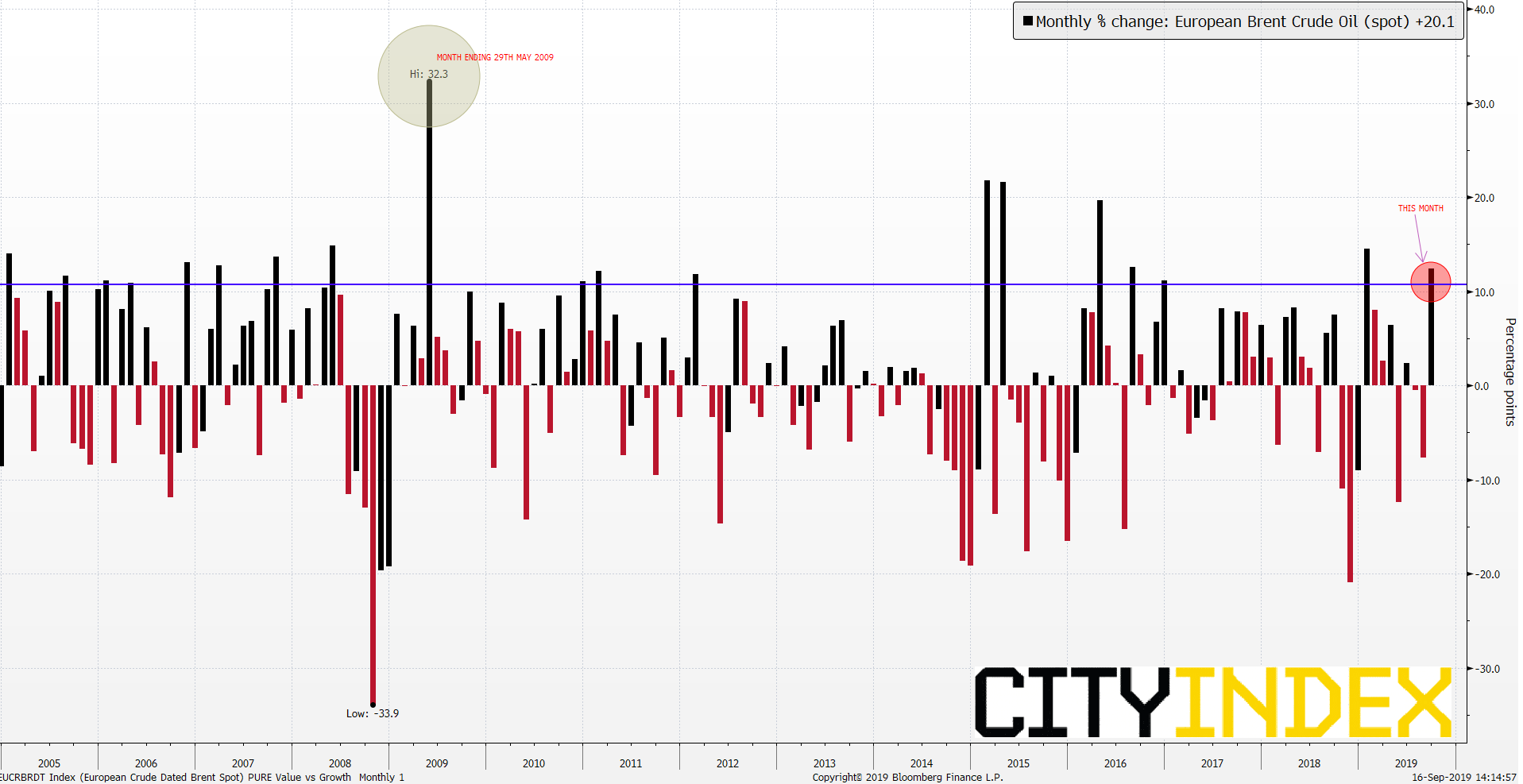 The main point that springs out right now is that whilst there’s no underestimating the seriousness of the weekend’s events, so far, the impact should be seen as relatively contained because the price increase is far lower than much larger medium-term price spikes in recent history.

Given that the medium-term oil price impact looks set to be measured and not extreme for now, it makes sense that the stock market reaction is not yet consistent with the notion that open military conflict involving Saudi Arabia and Iran, and possibly the United States, is likely. To be sure, trepidation is being expressed elsewhere.

Treasurys are leading sharp rallies across all developed-market sovereign debt. Other typical ‘safe-havens’ are also seeing demand as the yen, gold and to a certain extent the dollar, erase last week’s declines with gains. Even for ‘safe havens’ though, it’s a nuanced ‘risk-off’ picture. For one thing, the 10-Year U.S. Treasury yield is just emerging from one of its most rapid jumps for years. It climbed 33.6bp last week, its biggest increase since the week of the 2016 U.S. presidential election. That move coincided with a decisive rebound for global shares and pressure on other havens. As such, Monday’s safety seeking is almost certainly partly fuelled by some inevitable unwinding of last week’s moves.

It’s worth noting that the Swiss franc was not participating in haven advances at the time of writing.

Markets can be expected to continue responding to supply fears with trepidation, but little panic, in lieu of further information about how long it will take to return Abqaiq and Khurais to full capacity, and news on fresh developments in Saudi Arabia and Iran.