The stock market generally moves up or down based on investor expectations about the future. October's market performance, during which the major indices endured their worst weekly losses since March, suggests the future looks cloudy.

The slump in stocks during October wasn't unique to the U.S. either, and it will likely continue into November. Global markets have struggled to cope with an array of headwinds—the potential outcome of the U.S. elections, economic uncertainty, a Federal Reserve meeting Wednesday and Thursday and Friday's U.S. jobs report.

Still, the most important questions will take longer to answer: how serious will the latest wave of coronavirus prove to be? And how long will it take for an effective vaccine to become widely available?

This year's mercurial market action is easily the most dramatic since the 2008-09 financial crisis. "I don't remember a time when I've seen such volatility as we seen," Henry Kravis, co-CEO of buyout giant KKR, told Bloomberg Television recently.

The major averages fell for a second straight month with the S&P 500 slipping 2.8% and the NASDAQ Composite Index off 2.3%. 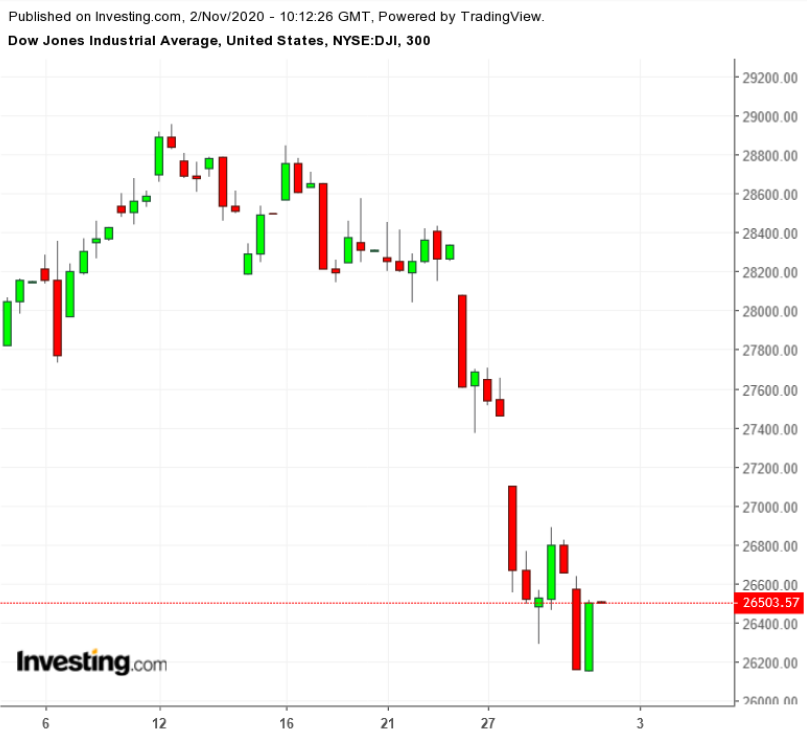 Most of the market losses came after Oct. 12 as the Q3 earnings season kicked off and concerns escalated about the eruption of a second wave of the pandemic.

Lastly, the S&P 500 fell 5.6% on the final week of October, with the Dow down 6.5% and the NASDAQ off 5.5%, their biggest weekly losses since the week of March 16, when stocks basically melted down on coronavirus fears.

Market tipped to the negative in September

The declines seen in October are part of another trend that started after Sept. 2 when the S&P 500, NASDAQ and NASDAQ 100 indices all hit new highs, setting off sell signals from technical indicators like relative strength indexes.

The gains over the summer had been fueled by soaring prices in such stocks as Apple (NASDAQ:AAPL), Tesla (NASDAQ:TSLA), Amazon.com (NASDAQ:AMZN), Zoom Video Communications (NASDAQ:ZM) and Google parent Alphabet (NASDAQ:GOOGL).  Plus, there was a red-hot market for initial public offerings.

But traditional retailers, restaurants and movie theater chains, plus energy companies, coal companies in particular, suffered and will continue to struggle until oil prices, now below $40 a barrel, recover. 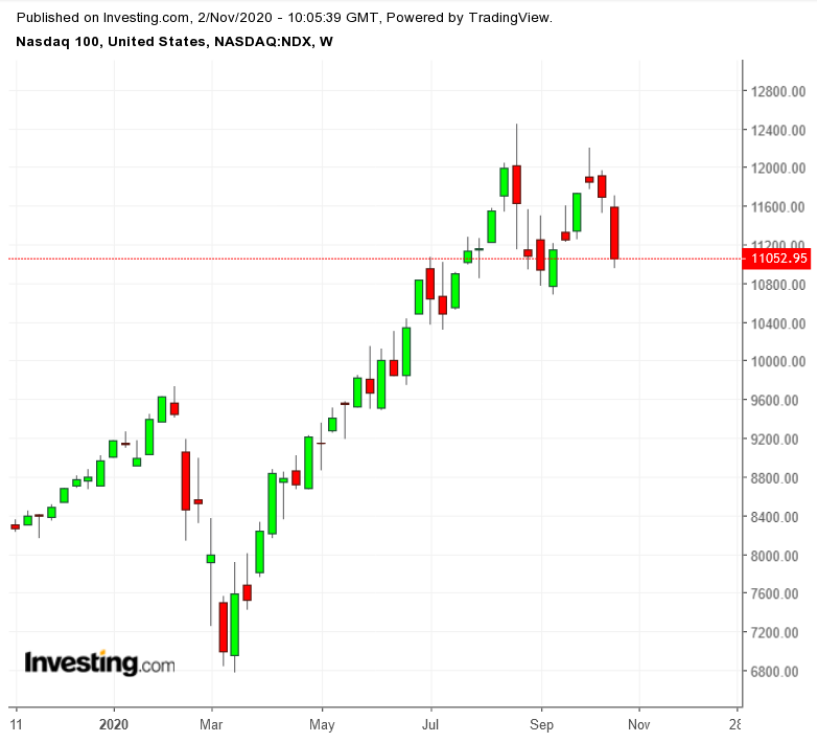 Tesla fell 9.6% in October, the ninth worst performer among NASDAQ 100 stocks, but it's still up nearly 364% for the year, good for second place overall—after Zoom Video's 577.4% advance.

In addition, it's not clear the market has bottomed yet. Futures trading at time of writing suggests a modest positive open on Monday. What is more likely is that a definitive election outcome may set off a rally.

Boeing remains a big problem for the Dow

The mega-cap Dow has continued to struggle this year, despite the presence of Apple and, Microsoft (NASDAQ:MSFT), two of the most valuable companies in the world.

The index was positive—albeit barely—on Sept. 2 and has struggled since. It finished October down 7.1% on the year.

The Dow's biggest drag continues to be aviation giant Boeing (NYSE:BA), which is still struggling on two fronts: 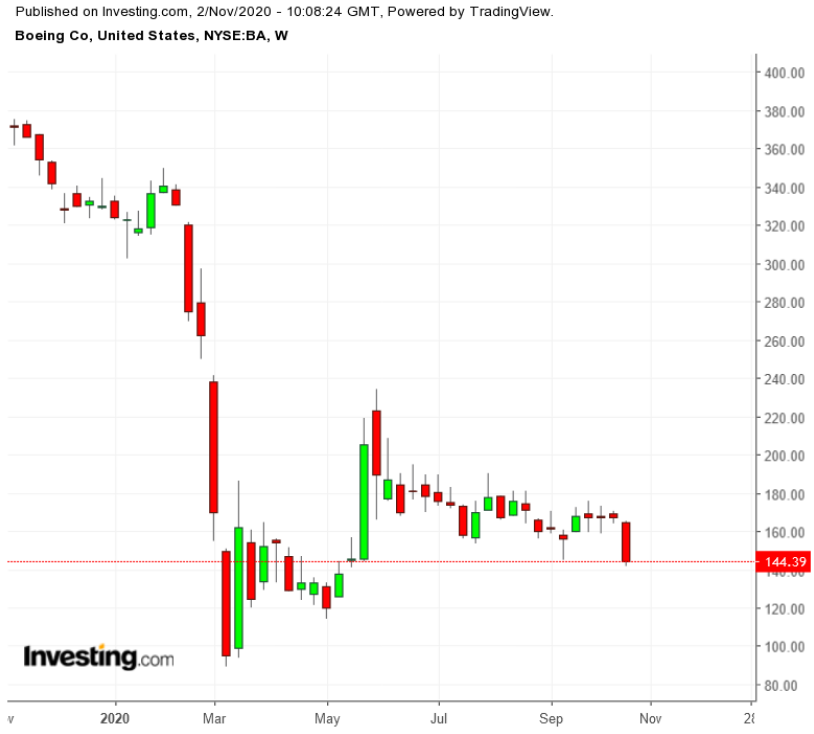 Shares fell 12.6% in October and are down nearly 56% for the year, the worst performer among the 30 Dow stocks. Boeing shares declined by more than two-thirds from their all-time high of $446.01, reached in early 2019 before the second crash of its 737 MAX forced regulators to ground the plane.

The Dow has also been pressured by Intel (NASDAQ:INTC). The chipmaker has dropped 14.5% on the month and 26% on the year after Q3 results revealed surprising weakness in the company's data-center business.

During the course of the month, the market was regularly buffeted by negative and positive news on when a vaccine will be available. Notwithstanding President Donald Trump's assertions that a viable vaccine is close, most experts believe one or more vaccines will only win FDA approval with an emergency use authorization, perhaps no sooner than the end of the year. Manufacturing and distribution of billions of doses will take some additional months after that.

As well, research and clinical trials have produced some stoppages as unexpected issues were encountered.

As a result, related pharma and biotech stocks have been and will probably remain choppy. Moderna (NASDAQ:MRNA) was down 4.6% in October but continues to be up 245% this year. Pfizer (NYSE:PFE) and AstraZeneca (NYSE:AZN) have not moved much even though both companies are thought to be closest to a vaccine. 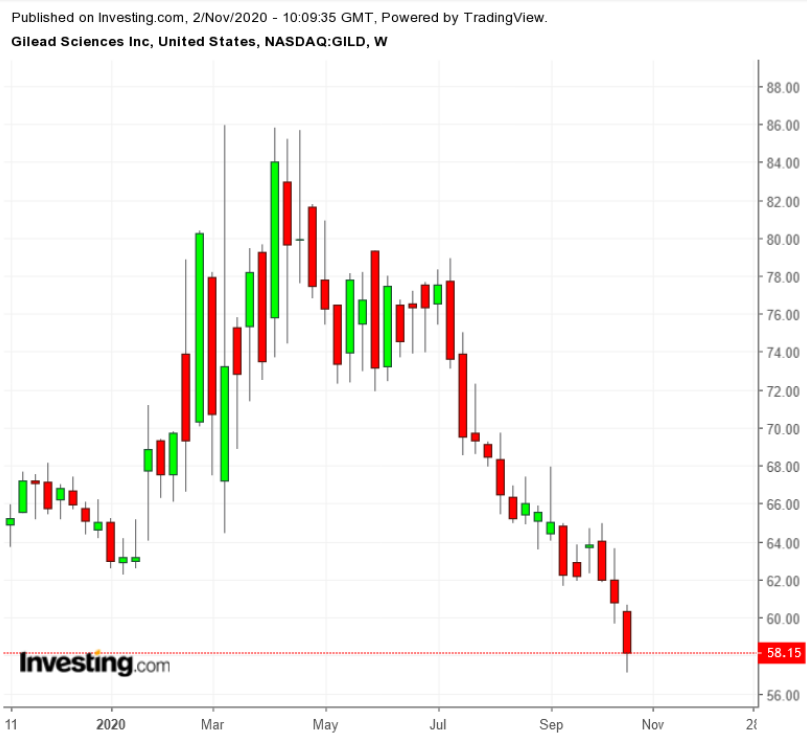 Shares of Gilead Sciences (NASDAQ:GILD) hit a 52-week low of $57.04 on Thursday after the company cut its full-year revenue forecast, citing lower-than-expected demand and difficulty in predicting sales of remdesivir, the only COVID-19 treatment approved in the United States for patients who are currently hospitalized. While the stock moved up slightly on Friday, it was off 8% in October and down 10.5% in 2020.

The big question facing the stock market going forward is when will a sustained economic recovery take hold. Democrats and Republicans were unable to agree on a second big stimulus package before the election, which contributed to the selling at the end of the month.

Before the disappointment set in, transportation stocks that stood to benefit from more consumer demand for goods made solid moves. The Dow Jones Transportation Average (DJT) moved higher in the second and third quarters, briefly hitting a record high on Oct. 20 before end-of-month selling pushed the index down 1.1% for the month. The transports are still up 1.88% for the year.

This segment has been led by FedEx (NYSE:FDX) and United Parcel Service (NYSE:UPS). Both shipping companies saw demand for delivery services explode in the pandemic. That's likely to remain strong if COVID-19 case numbers continue to rise.

Airline shares continue to be weak because of the collapse of travel. The NYSE Arca Airline Index was up a modest 1.6% in October and is down 48.3% currently. Delta Air Lines (NYSE:DAL) rose a modest 1% in October but is now down 47% for the year.

Energy stocks continued to stumble under the weight of low oil and gas prices. West Texas Intermediate (WTI) crude fell 11% to $35.79 a barrel in October and is off 41% this year. Brent, the global benchmark, fell 10.3% and is also down more than 41%.

Chevron (NYSE:CVX), the last of the oil giants still listed on the Dow, fell 3.5% on the month and is down 42% year-to-date. Exxon Mobil (NYSE:XOM) fell 5% and has slumped 53%. The oil price drop is forcing many smaller companies to find merger partners or buyers—or seek bankruptcy protection.

Home builder shares and stocks of related companies cooled off in October after big gains in the spring and summer quarters.

The iShares Dow Jones Us Home Construction ETF (NYSE:ITB) fell 8.2% in October after six months of gains. Investors had bought heavily into the exchange traded fund as well as builder stocks as families looked to move out of cities in order to escape from the pandemic in order to shelter with more space.

The catalyst for the downturn in these stocks may have been a Commerce Department report on Oct. 26 showing that new home sales dipped in September, though not by much. A more important question may be if the havoc the pandemic produced is capping the number of potential buyers.

Housing and construction activity were a catalyst for construction-equipment maker Caterpillar (NYSE:CAT), whose shares were up 5.3% for the month, second behind commercial and personal property insurer Travelers (NYSE:TRV), up 11.6%.

What markets need most right now

More than anything, companies and investors believe they need clarity about the domestic and global economies—that the rules are clear, that the political world is stable, that the coronavirus can and will be brought under control.

Volatility has been the only market constant over the past two years, with big gains suddenly wiped on bad news about China trade talks, the pandemic, an oil-price collapse and even a Presidential impeachment.

If you're looking toward the future, you might see it in copper, silver and palladium, whose prices have been reasonably strong most of the year, reflecting hopes for an industrial rebound.

Transportation and logistics will be critical pieces of the puzzle going forward, likely making FedEx and UPS solid equity choices. Railroads, especially Union Pacific (NYSE:UNP) will also be important, especially if auto sales and home construction continue to be decent.