Last Friday, the US stock market ended a negative week on a high note led by technology stocks where the S&P 500 and Nasdaq 100 recorded solid gains of 1.6% and 2.3% respectively.

The US dollar continued to surge against the major currencies and capped off last week with a gain of 1.1% as measured by the US Dollar Index, its best weekly performance since 11 May 2020. Hence, putting downside pressure on commodities prices with weekly declines seen in COMEX Gold (-2.8%) and COMEX Copper (-1.8%).

China had managed to score a “second goal” in the on-going US-China “Tech War” where US District Judge Carl Nichols granted a preliminary injunction against President Trump’s ban on TikTok where it was supposed to take effect in U.S. app stores on Sunday midnight (New York time). Last week, another US judge blocked the US administration ban on another popular Chinese owned social media app; Tencent (HK:0700) Holdings’ WeChat.

Profits at Chinese industrial firms grew for a fourth consecutive month; industrial profits rose 19% in August, slightly lower than July increase of 19.6%. For the January to August 2020 period, it was still in the red with a year-on-year loss of -4.4%. The USD/CNH is trading almost unchanged at 6.82 from last Friday’s close and Chinese stocks opened firmed with the broader based CSI 300 Index up by -0.33% at this time of the writing.

Japan’s leading economic index for July (final); early preliminary reading was released at 86.9 which saw four month of consecutive growth since April 2020 amid a gradual lifting of COVID-19 restrictions in Japan.

Alibaba (NYSE:BABA) Group’s three days virtual 2020 Investor Day starts today; speakers will include CEO Daniel Zhang and other members of its senior management team. Last year, shares of Alibaba gained during the firm’s investor day where five-year targets for gross merchandise volume and active customers were released. Market participants will also be eager to hear more details about the impending Alibaba’s financial affiliate Ant Group’s dual IPO listing on Hong Kong and China. Ant is expected to be seeking to raise about US$35 billion for a valuation of about US$250 billion, making it the world’s largest IPO.

Legal between US Inc and Epic Games; US District Judge Yvonne Gonzalez Rogers will decide today whether to force Apple (NASDAQ:AAPL) to allow Epic Games’ popular video game Fortnite back into the App Store with Epic’s in-house payment option. She will also rule if Apple can block third-party apps using Epic’s Unreal Engine development software. This judgement will set a precedence on whether tech giants such as Apple and Alphabet’s Google (NASDAQ:GOOGL) have broken antitrust rules where Apple and Google can charge fees of up to 30% to developers from using their app stores. 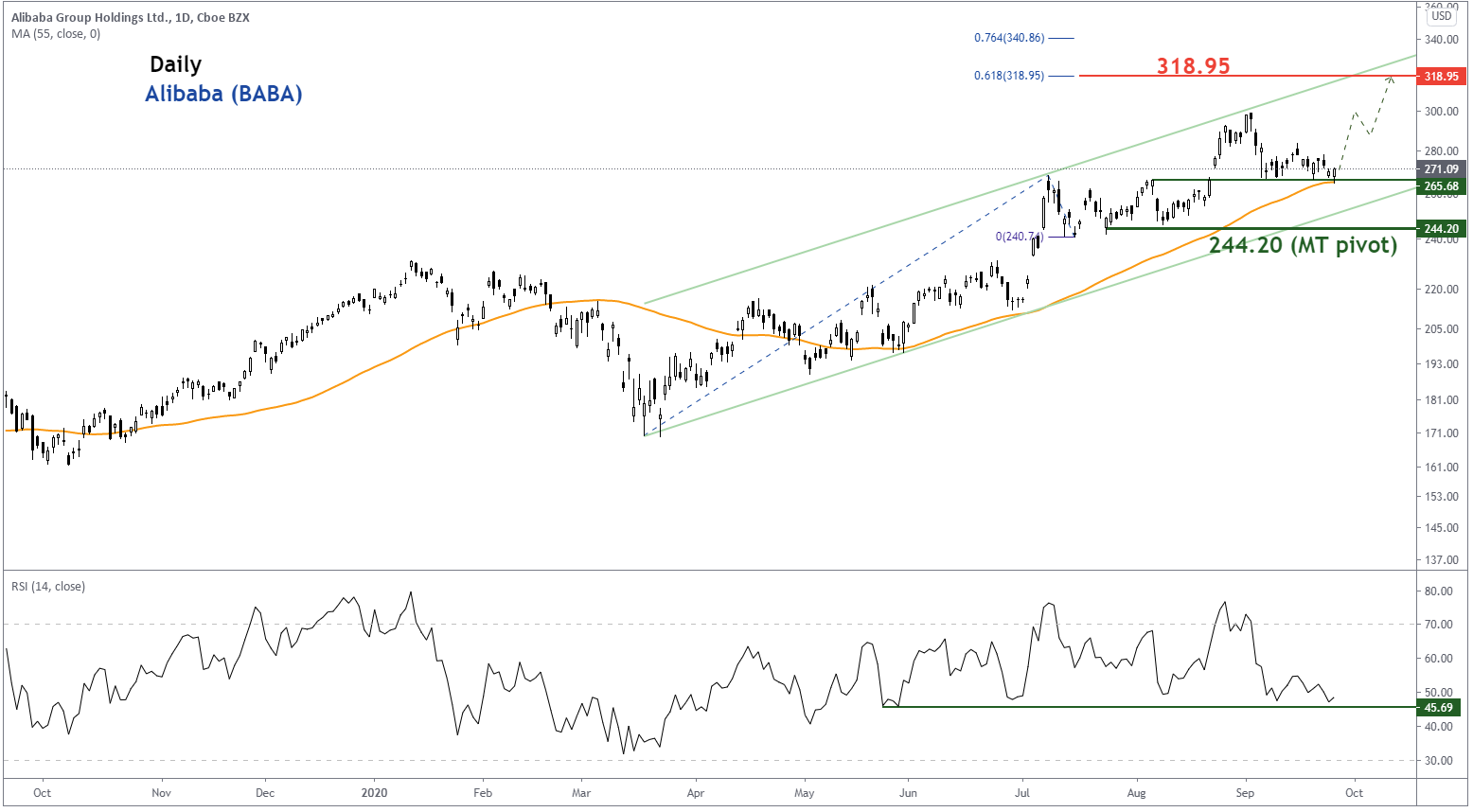