Ask anyone knowledgeable about the crypto market what’s the shadiest digital currency out there right now and without hesitation it's likely they'll tell you it’s Monero (XMR).

Sometimes referred to as "the drug dealer's cryptocurrency of choice" because of its sharp focus on privacy, Monero was founded in 2014. Its website describes it as “secure, private, and untraceable," as well as "accessible to all." The technology behind Monero is the CryptoNote protocol, an evolution off the ideas that form the basis of Bitcoin. However, unlike Bitcoin's transparent blockchain which allows anyone to follow the chain back in order to determine who sent and/or received coins, transactions via CryptoNote cannot be traced, and senders as well as receivers of coins remain anonymous. 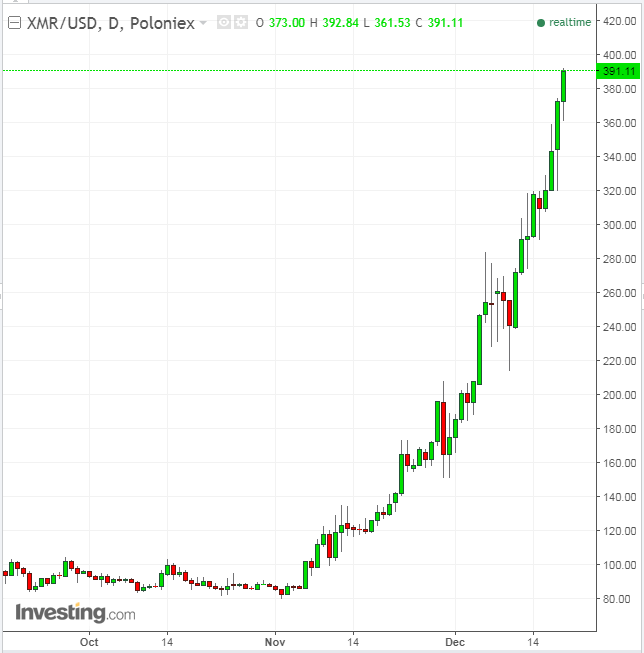 There have been recent reports of computers being hacked and hijacked, for use in unauthorized mining of Monero. One Buenos Aires-based Starbucks' Wi-Fi provider was found to have forced a 10 second delay when users first attempted to connect to the service, during which time the service surreptitiously used their laptops to mine the digital currency. Russian oil pipeline giant Transneft's computers were also targeted for the same purpose, via malware.

Researchers Maxim Zavodchik and Liron Segal described to SC Magazine how a hack attack might work. When a hacker is able to access a Windows-based system they will use PowerShell to download and install a malicious software program that mines Monero. In Linux the attackers may use Python scripts taken from EmpireProject, after which they also install the Monero miner.

Monero isn't only the coin of choice for shady characters, however. Monero's developers have announced that 45 musicians including Mariah Carey, Sia, G-Eazy, Weezer, Dolly Parton and Morrissey, as well as five online stores, will accept Monero as payment during the holiday season.

It's a smart move for Monero, affording it at least some form of legitimacy. But will this go at least some way toward obscuring the fact of its popularity among hackers, money launderers and other criminal types? Right now, social media remains full of Monero-related gibes about how the cryptocurrency is used for dodgy deals or is ideal for apocalyptic events:

All of which begs the question, is Monero's unique privacy setting a good idea? Jeff Mahony, founder and CEO of UbiquiCoin, a decentralized digital currency, thinks so. He says:

While Monero’s privacy features and ease of mining have helped it grow in popularity, they are the same reasons it has become so popular among hackers and criminals.

Despite the recent negative press, Maksim Izmaylov, founder and CEO of Winding Tree, a blockchain non-profit startup, believes the overall crypto-craze is beneficial to the society at large since it forces us to improve security:

“We...have to be aware that in the information era we all should be able to protect our accounts and our information, including using adequate protection against malware. Regarding the Starbucks' provider, it's not the first time a company is using dubious practices to make money. But I think it's a brilliant way to monetize free Wi-Fi networks. I'd sacrifice 10 seconds of my time to get a good connection, if they disclosed what's going on in the background. Regarding Transfer, I think they just have very poor security measures if they allowed that to happen.”

Compared to blockchain, the technology Monero uses was developed with a different objective in mind. After all, privacy can be highly desirable, if it’s not misused. So what are Monero's positives? Graeme Moore, an executive at Polymath, a securities token platform, notes:

"Privacy coins, in general, are very interesting from an investment standpoint. Having the ability to send the value in a truly private manner has an incredible amount of use cases (that extend far beyond criminals and drug dealers). One notable use case: People sending money to political or activist organizations and preferring to conceal their identity. If you intend to purchase privacy coins purely as an investment, I recommend purchasing Monero, Zcash, and Dash. One of these coins will likely become the "winner" of private transactions, and at this point, it is difficult to predict which one.”

Perry Woodin, CEO of Node40, a blockchain governance and cryptocurrency tax compliance company based in New York, thinks opaque, privacy-focused blockchain applications such as Monero are also interesting from a computer science perspective:

“Mainstream adoption is likely not the goal of Monero. The digital currencies that will thrive over the next decade will need to support compliance. If a regulatory agency is unable to verify and analyze transactions on the blockchain, there isn’t much hope for mainstream adoption. Business will opt for currencies that can operate within the bounds of government regulation. Privacy-focused digital currencies like Monero and Zcash will have to settle for the fringes where parties to transactions are happy to operate outside the reach of regulatory agencies.”

There’s no doubt regulators will eventually move in and clamp down on the global cryptocurrency craze which is currently having its dotcom moment. Recent Monero mining highjacking incidents highlight how critical cyber security and crypto regulation are. Will Monero be able to cross over from the dark side and gain legitimacy? Hard to tell, but as the tenth-most popular digital currency right now, investors aren't shying away from Monero, which could bode well for the token's future.