The acceleration of support for the left-wing outsider in France's general election, Jean-Luc Mélenchon, has jolted investors out of complacency over chances of a win by Eurosceptic Marine Le Pen, as shown by a jump in gauges of risk aversion. 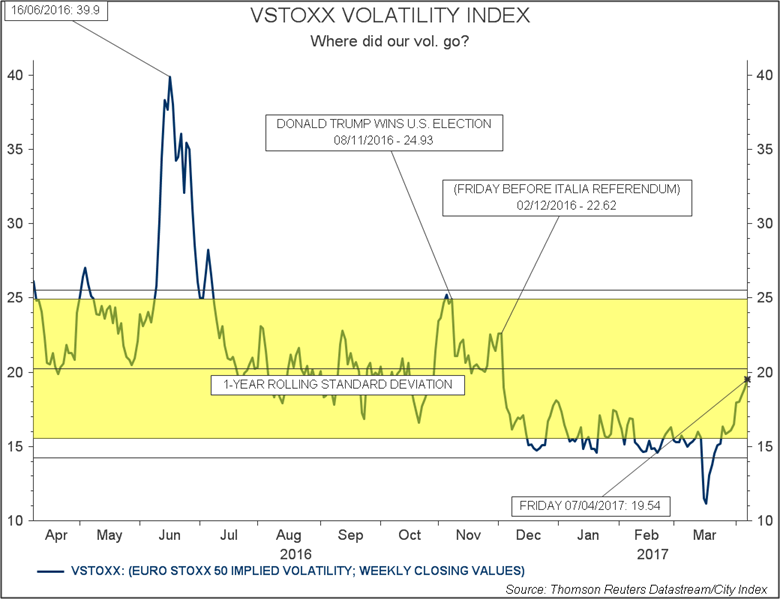 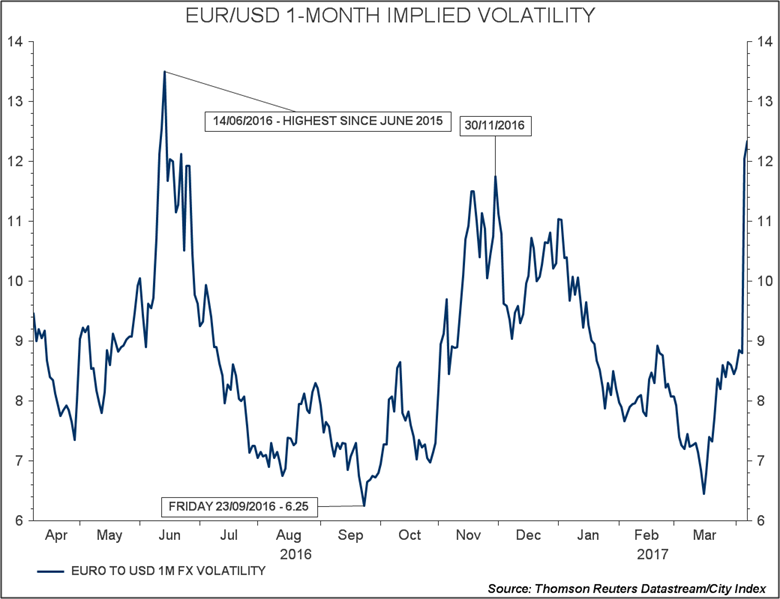 With fewer than two weeks to go before first-round voting, this means investors are now faced with the choice of ramping up insurance against whipsaws at greater expense than a few weeks ago, or remaining relatively unguarded.

With polls continuing to point to a rejection of far-right candidate Marine Le Pen, it's little wonder that financial markets have seemed complacent.

However, wider geopolitical events over the last few trading days have tilted investor perceptions of the need to hedge the French risk event.

It coincides with an advance in apparent support for Communist Party-endorsed Mélenchon. An IFOP poll on Monday showed his share of the first round vote could be 18%, one percentage point higher than late last week. Markets are also reacting to Le Pen re-establishing a thin first round lead against Macron in latest surveys. IFOP’s Monday afternoon survey gave Le Pen 24%, actually down half a point, but Macron fell by half a point more to 23%. Mélenchon’s share rose from 13.5% two weeks ago in Harris Interactive Polling to 17% by Thursday after TV audiences resoundingly found him to be the star performer of last week’s debate.

The beleaguered conservative Francois Fillon is still slipping, falling further from 20% late last week to 18.5% at the time of writing. For now, the main source of growth in Mélenchon’s vote largely appears to be the Socialist Party’s Benoît Hamon, who has faltered to 9%, below 10% for the first time since late January.

What hasn’t changed is the structure of projected second-round voting. 58% of support would go to Macron, and 42% to Le Pen in the run-off, according to IFOP data released on Monday evening. Even here though, markets have reason to be warier. Opinionway’s poll, out that morning, put the balance at 62%/38% for Macron. It is these recalibrating expectations—particularly the notion that Mélenchon could replace Macron in a run-off against Le Pen—that have finally spurred a rise in European risk aversion.

Whilst still relatively implausible, chains of events that could install Le Pen as President grow more probable as Macron's support is eroded, given an almost unprecedented pool of more than one third of voters who continue to say they are undecided.

That takes to us to the crux of persisting risks to European markets from a seemingly low-probability outcome. They will be upended more severely as the probability of the least desirable outcome rises. It is a conundrum when the market’s worst case scenario still seems distant, whilst at the same time markets failed to predict anti-establishment upsets last year. A secondary risk is that a scramble to take cover will be more costly and disorderly the later it is left.

Yet longer-term hedging markets remain subdued despite Monday's spike in borrowing costs. One that is tied most directly to Le Pen’s intention to take France out of the eurozone is the 5-year Credit Default Swap. It will pay out if France redenominates back into francs. At less than 54 basis points (bp) late on Monday, the CDS still implies less than a 2% chance of Frexit next year and about a 9% chance over 5 years. Neither term suggests much urgency amongst debt hedgers.

Indeed, the France/Germany benchmark yield spread itself is still nowhere near its 190bp divide in 2011, hit amid heightened Grexit risk. By late Monday, it had eased by two points to 70bp. Noting the 50bp differential in 2014 (pre-QE), the current spread suggests the bond market sees the probability of a Le Pen win at little more than 10%.

Granted, there are many ways that these impressions of how much the market cares could be wrong. Shorter-term protection buying, for instance, can be more telling (see EUR/USD implied volatility chart above). However signal-to-noise ratios deteriorate in more targeted hedging. Alternatively, what looks like under-priced risk may simply reflect sliding price elasticity of demand. After all, it's been an expensive 10 months for hedging.

That's not to say a Le Pen victory is impossible. Assumptions of her defeat are based entirely on polling data—on which scepticism emerged after the Brexit vote and U.S. election. A potential ‘shy voter’ effect, combined with a more dynamic view of second-round scenarios—when drop-out candidates can be expected to barter their support—suggests higher Le Pen risk. Ironically, we have little option but to use polling data and crowd-sourced variants to demonstrate alternative scenarios.

Our speculative deductions have a more than evens probability of being disproved. Still likeliest scenarios for a Le Pen win are outlined below.

Under these ultra-cautious scenarios, Le Pen hits more than 50%, even without the unpredictable alliances that ‘soft Eurosceptic’ Mélenchon might forge.

We can see how the National Front candidate could get close to, though would remain below Macron’s current 58% assessment, which itself is likely to rise, should he progress to the run-off.

As per Donald Trump and Brexit though, her opponents and markets should be more concerned that higher levels of commitment among her confirmed support, together with an unusually high ‘free-floating’ electorate, may again combine to increase the chances of a result that appears improbable.

To be sure, severe market dislocations if Le Pen approaches victory or even clinches it, will probably correct themselves quickly, as they did after Brexit, the U.S. election and Italy’s referendum.

Even so, a short-lived rise of the spread between French and German 10-year bonds towards 190 basis points, or higher, in a panic scenario would still be hazardous, as would a 5% or more slide of the euro, and 10%-15% hits to major European stock indices. All are foreseen by major investors if markets' least expected scenario happens (again).