Market Sentiment Turning Again After Yellen But Will It Last?

Market Sentiment Turning Again After Yellen But Will It Last?

The strengthening of the Japanese yen tends to be seen as a signal to the markets that caution is recommended. After all the huge monetary stimulus and negative interest rates, why would the yen be strengthening against a US dollar which is part of the Federal Reserve tightening? The answer has something to do with general concern in the markets over global economic growth and the more the Fed talks about it (the world “global” popped up 22 times in FOMC minutes recently), the more the markets will worry. With the classic safe haven plays benefitting yesterday, such as the yen, US Treasuries and gold, we have seen equities under pressure. Wall Street closed lower with the S&P 500 down 1.2%. However, there has though been a marginal improvement to market sentiment which has turned overnight after a speech from Janet Yellen talked of the “healing” labor market and defending the Fed’s decision to hike rates in December. This has generated some form of reversal with the safe havens beginning to unwind some of their gains. Despite broad weakness across the Asian trading, the Nikkei managed to squeeze out some gains (+0.5%) amidst the slight weakening of the yen. European markets are also trading slightly positively in early moves. Whether there is any longevity in these moves remains to be seen.

Forex markets show a mixed picture for the dollar this morning, but the main takeaway is that risk appetite has improved. The yen is weaker, whilst commodity currencies have rebounded, with the Aussie and Canadian dollar stronger. The gold price is down by a few bucks, whilst the improvement in risk is also shown through a rebound in oil which is up around 2%.

This is becoming an important phase for the commodity currencies. I focused yesterday on the Aussie which has slowing momentum and downside pressure building, but what of the kiwi? The strength of the momentum indicators over the past couple of months have enable corrections to consistently be bought into at higher levels and subsequently the market has been pushing higher within an uptrend channel. The kiwi tends to be strong for a few days and then undergo a short period of retracement before the bulls push ahead again. This generally tends to find the Stochastics unwinding to give then next buy signal around 40 and the RSI picking up again in the mid-40s. The Kiwi has been correcting now for the past six days and despite yesterday’s bearish outside day session, the pair is now back around a bit of a crossroads. The old $0.6750 breakout level is becoming a pivot having all but caught Tuesday’s low and again yesterday’s low before the buyers have supported overnight. This is a level that is also shown as pivotal on the hourly chart. The RSI is back around 50 and whilst there is still some room historically it would seem that there is an appetite for support once more. Furthermore, the Stochastics are again falling back towards 40 and looking to bottom again. This means that either today or tomorrow we could find out whether the bulls are still in control for the medium term. This is certainly one to watch. Yesterday’s high at $0.6860 is the near term resistance, with the late March low at $0.6667 supportive which also coincides with the current low of the trend channel.

The euro has been rangebound now for over a week as the support continues to be formed around $1.1330. Yesterday’s initial attempted breakout failed at $1.1453 which was certainly in the proximity of the old long term highs and again begins to question whether the euro bulls have the momentum to be able to break out. The momentum indicators reflect the recent range formation and have rolled over but with the RSI failing around 70, this would be consistent with a failure to muster a breakout. Yet again the candlestick formation for yesterday was a small body with long shadows and reflects the uncertainty. The run of neutral candles has left the hourly chart with a neutral configuration and there is little real sign of the next breakout. Yesterday’s failed break at resistance shows the need to wait for confirmation of a break. So the range between $1.1330 and $1.1453 continues. A close below $1.1330 would imply $1.1210 whilst above $1.1453 implies $1.1570 now. Keep in mind the long term resistance around $1.1465 though. 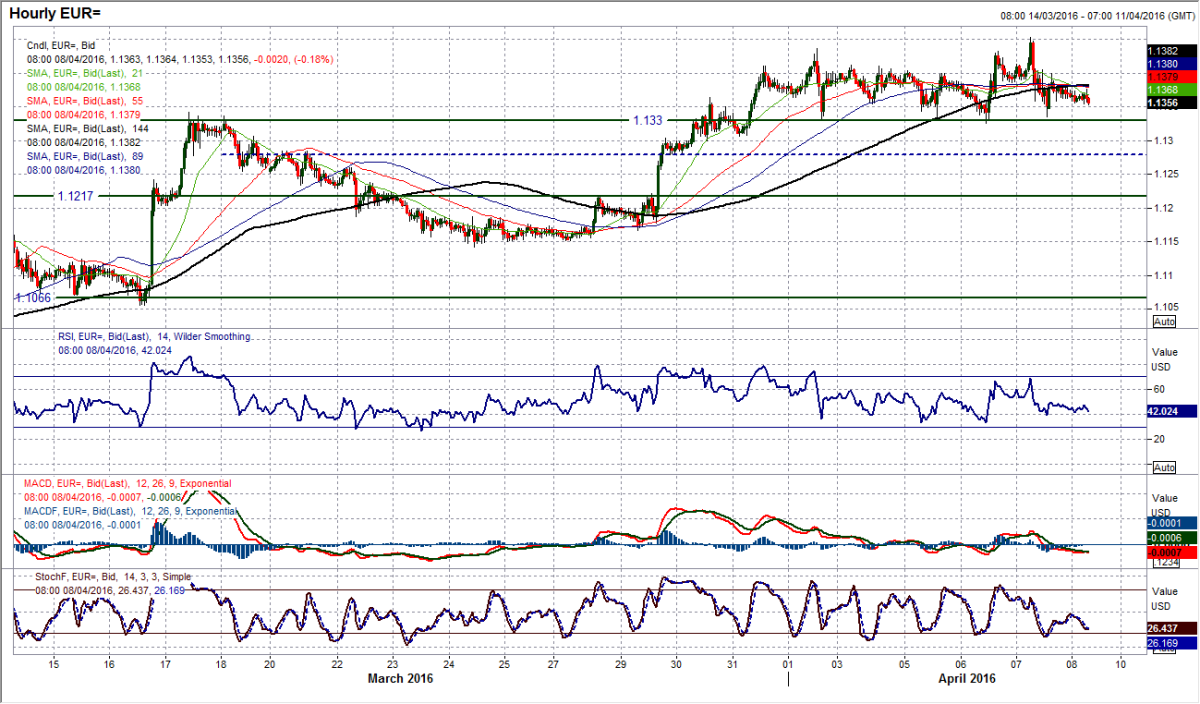 The old support around $1.4050 continues to be tested. After an intraday breach (to $1.4005) failed to make the closing breakdown, the bears have managed to maintain the momentum and are edging closer to the confirmation move. A close below $1.4050 would be the signal for further weakness on cable and a move back to test what is now the multi-year low from February at $1.3833. The momentum indicators are also on the brink, with the RSI straining to break below 40 and the MACD lines showing a sign of downside momentum. The hourly chart reflects well the bearish outlook with the downtrend intact since the 30th March and the negative configuration on the hourly momentum indicators where rallies are seen as a chance to sell. The resistance of the downtrend today comes in around $1.4170 which is also an old pivot resistance, whilst there is also a band of resistance from yesterday around $1.4100/$1.4170 which is now a decent sell-zone. Beyond $1.4050 the initial support is $1.4005. 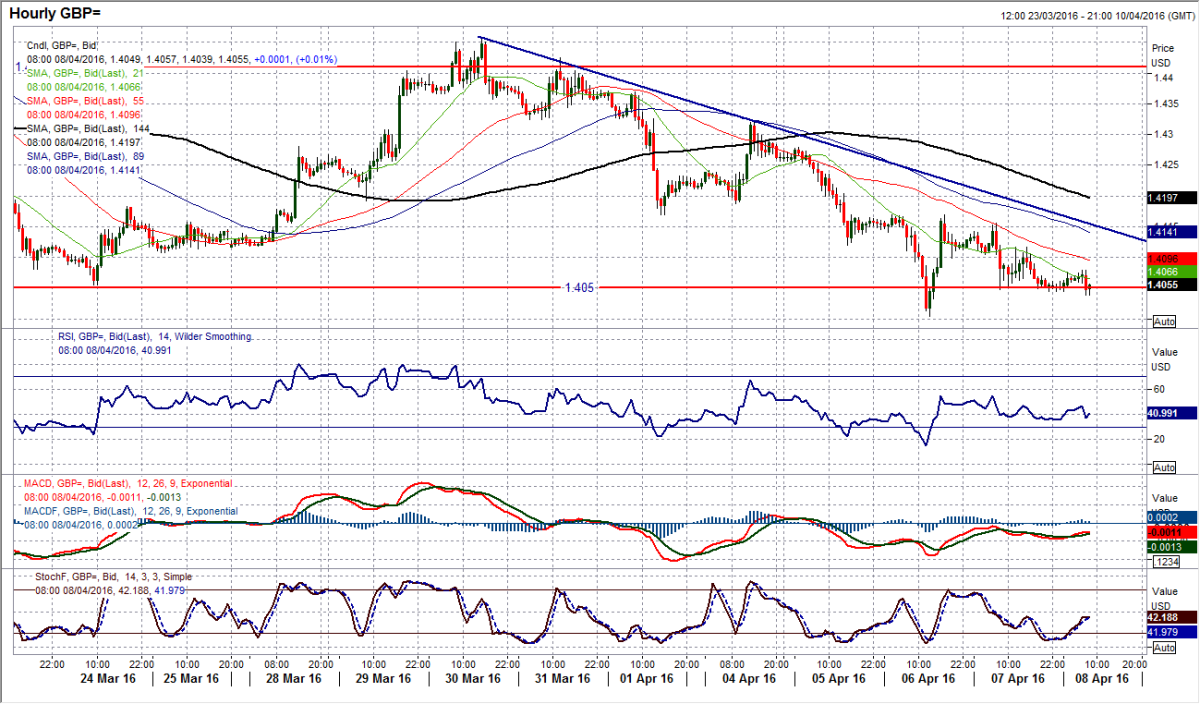 The accelerated sell-off has reached a low at 107.67 where it has started to draw some sort of support from somewhere. The question now is whether a rebound is merely a dead cat bounce or something more substantial. The daily technical indicators have turned up from oversold position but it is far too early to regard any signals as buy signals. The hourly chart shows the force of the recent downward move to such an extent that there is little real resistance that has been left. There is an initial resistance at 109.30 before the overhead supply around 110.00 comes into play. Technical indicators on the hourly chart have quickly unwound and if this trend is to continue, this would be considered to be a good opportunity to sell into the early strength today. The medium and longer term targets both suggest downside targets of around 107.00. 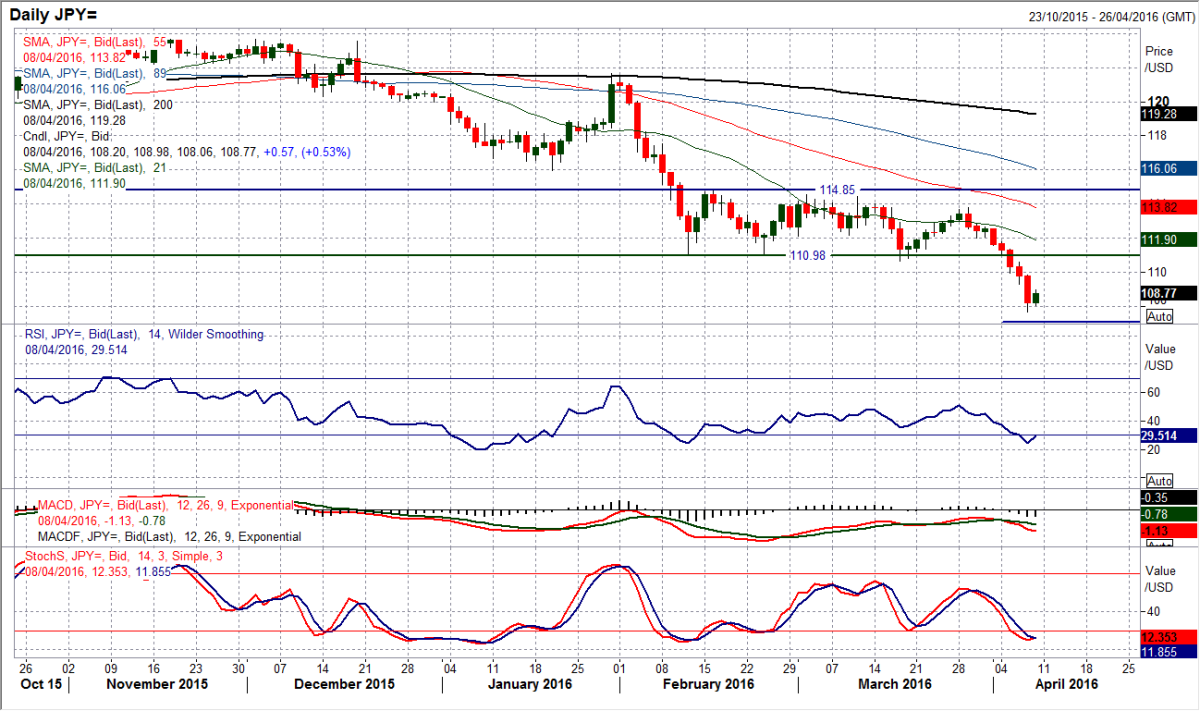 I have been talking about a gradual technical improvement on gold over the past couple of days. This improvement continued yesterday with a breach of the near four week downtrend channel. This move was confirmed on the momentum indicators which have been shallowing out and now seem to be looking to improve again (especially the RSI which has broken its equivalent downtrend and the Stochastics which have turned higher). The improvement on the price now need to push above the resistance at $1242.90 which would be a two week high and add weight to the argument of a near to medium term base pattern again. So for now the gold price is rangebound between $1208 and $1242.90 and having turned back lower again overnight, with hourly technicals also suggesting the continuation of a range, this range looks set for today. The pivot at $1225 is still a viable turning point for gold near term. 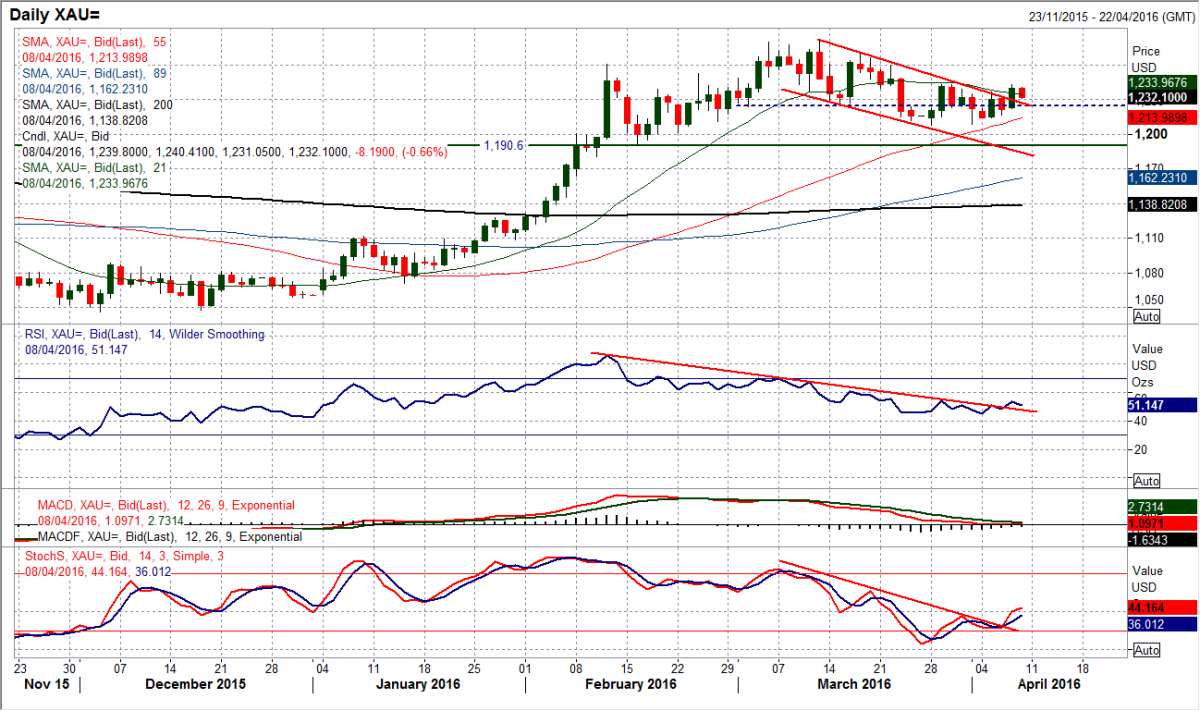 Risk aversion hitting across asset classes impacted on sentiment for oil yesterday, but a late rally and subsequent gains overnight have helped the bulls claw back once more. This means that once again today the oil price is looking to test the resistance at $38.30, a level which was interestingly almost bang on the neckline of the previous top pattern around $38.30. If this resistance holds for a second time then the bulls could begin to question their control as there is also the 23.6% Fib retracement of $26.05/$41.90 to add into the mix around $38.15. As things stand the momentum indicators have taken on more of an improving outlook, with the improvement bolstered by the support in place with Wednesday’s low at $36.55. One indicator I am increasingly interested in is the 89 hour moving average (currently $36.85) as it is a strong gauge for the near term outlook having been consistently a basis of support for the bull phases and resistance for the bear phases. 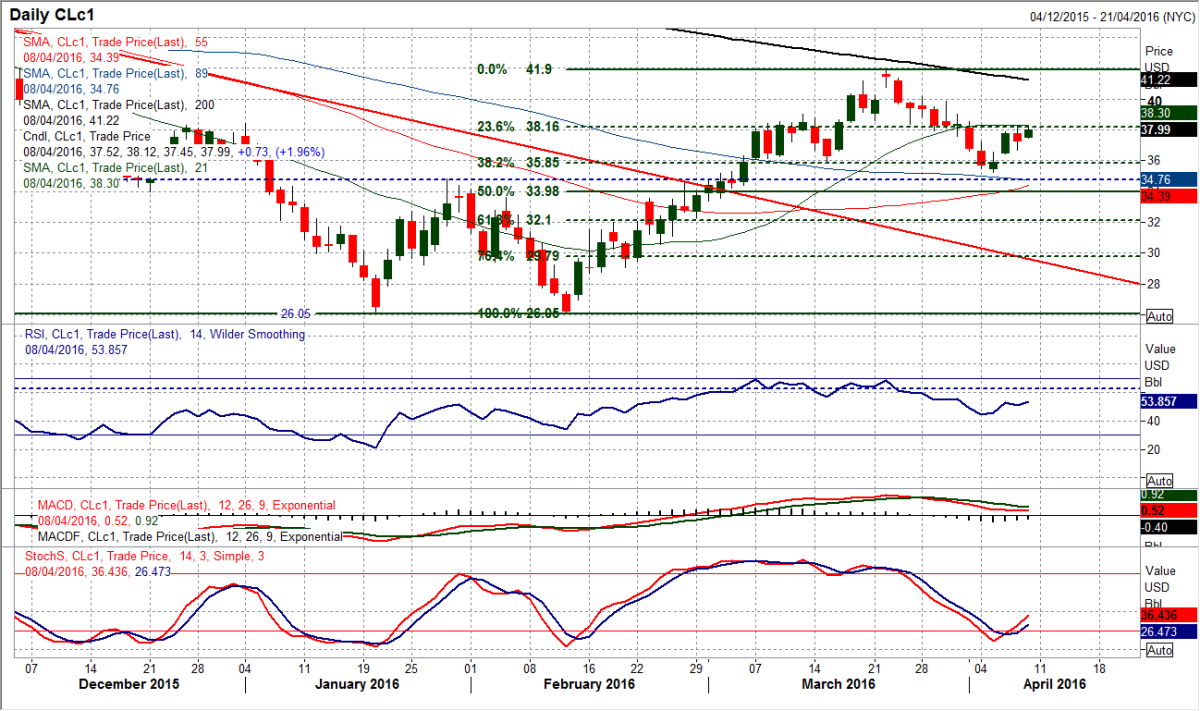 DISCLAIMER: This report does not constitute personal investment advice, nor does it take into account the individual financial circumstances or objectives of the clients who receive it. All information and research produced by Hantec Markets is intended to be general in nature; it does not constitute a recommendation or offer for the purchase or sale of any financial instrument, nor should it be construed as such.

All of the views or suggestions within this report are those solely and exclusively of the author, and accurately reflect his personal views about any and all of the subject instruments and are presented to the best of the author’s knowledge. Any person relying on this report to undertake trading does so entirely at his/her own risk and Hantec Markets does not accept any liability.