Major markets have become riddled with uncertainty. Although there is still an expectation that Joe Biden is (currently) very well placed to become President, just under three week’s to go there is plenty of time still for Trump to engage a recovery. A fiscal support package agreed before the election is increasingly less likely as Democrats once more reject a $1.8 trillion package from the White House as being inadequate. Risk appetite took a dive late Monday as Johnson & Johnson (NYSE:JNJ) paused its COVID vaccination trails, and this has now been compounded by a similar move from another US pharma company, Eli Lilly (NYSE:LLY). Although these kinds of pauses are common place in phase three trials, it has still jolted market sentiment. US yields have jagged lower, flattening the US yield curve and supported the safe haven US dollar (and also the Japanese yen too). Sterling will be particularly sensitive to EU/UK trade deal headlines in the coming days and a lack traction in front of this week’s soft deadline has left Cable at risk of the bears.

Wall Street ended a run of four successive days of gains, with a pullback yesterday. The S&P 500 was -0.6% at 3512, but futures have stabilised slightly this morning, with the E-mini S&Ps +0.2%. This has driven a mixed look to Asian trading, with the Nikkei +0.1% and Shanghai Composite -0.6%. European markets are mixed to slightly higher with FTSE futures +0.4% and DAX futures +0.1%. In forex, we see GBP struggling again this morning, whilst there is little real direction elsewhere amongst the majors. In commodities, we see gold has found a touch of support (+0.3%) after yesterday’s sell-off, whilst silver is -0.2% back. In a continuation of a mixed theme, oil has unwound some of yesterday’s bounce, and is around half a percent lower.

There are also several Fed speakers to watch out for today. The FOMC’s vice chair Richard Clarida (voter, leans slightly dovish) is speaking at 1400BST. FOMC board member Randall Quarles (centrist) is speaking at 1500BST whilst the FOMC’s Robert Kaplan (voter, centrist) speaks at 2300BST.

Chart of the Day – AUD/JPY

It is interesting to see that throughout so many forex majors and crosses, markets are struggling for sustainable trends. The swing lower on risk appetite early this week has seen safe haven plays benefit (such as the yen), whilst the higher risk currencies (such as the Aussie) have struggled. This move has dragged an improving outlook on Aussie/Yen back to a recovery uptrend and at another crossroads. Once again, it seems that the bulls have been unable to find traction. Already the recovery failure (at 76.50) was under the resistance of an old pivot at 76.75 and leaves recovery momentum faltering. With indicators such as RSI back under 50, MACD lines struggling under neutral and Stochastics crossing back lower, the bulls are being neutralised again. Will this now turn corrective? A two week uptrend is creaking and a closing breach would at best confirm a neutral outlook, but would also pressure another old pivot around 75.00. Closing below 75.00 turns the market corrective once more to test 73.95. Resistance is strong now between 76.50/76.75. 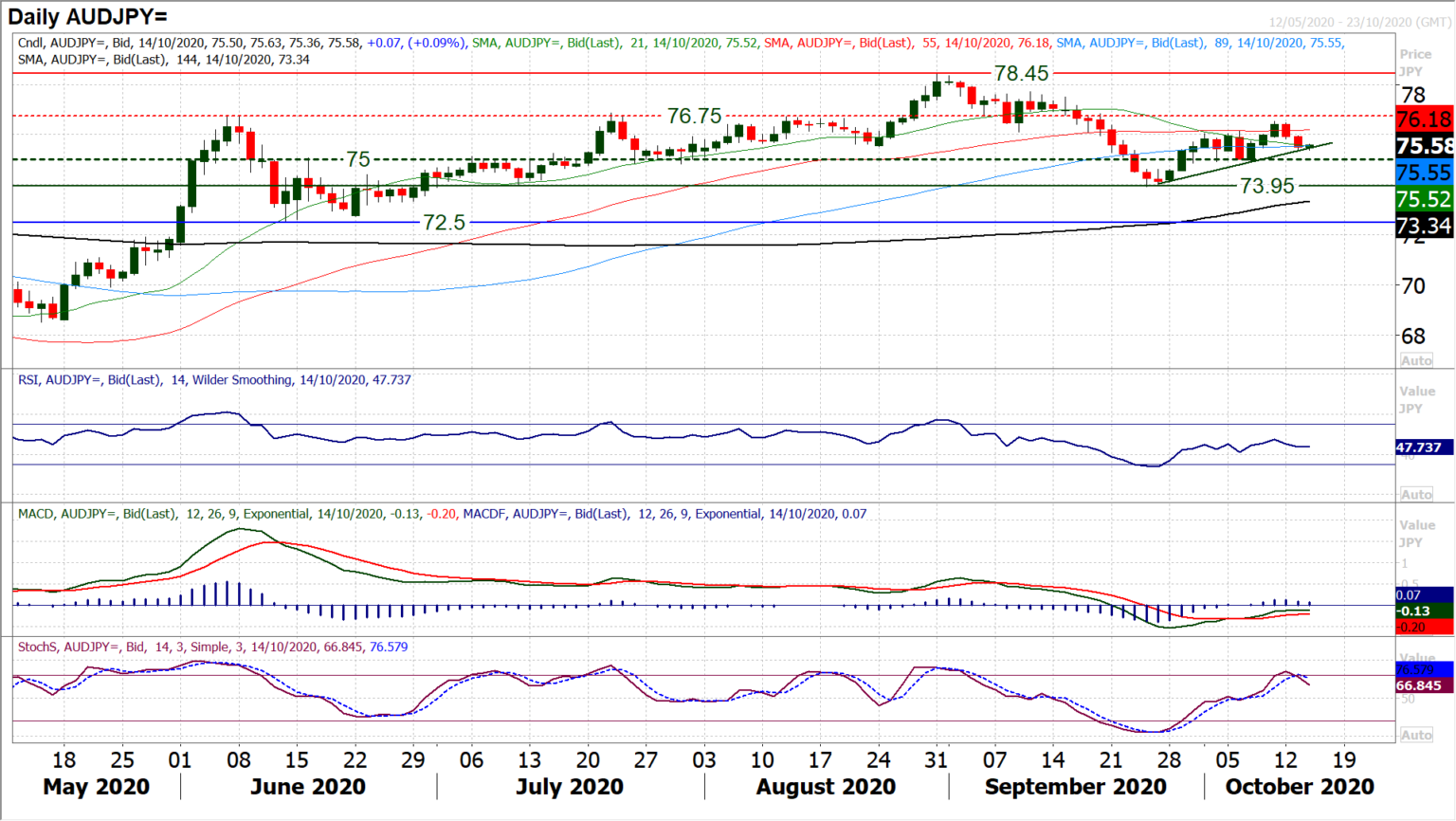 The efforts of the bulls over the past couple of weeks seem to be coming to little. EUR/USD has struggled to find positive traction in a recovery and now, with yesterday’s decisive negative candle, the move seems to be over. A feature of ranging markets, is that attempts to form a new trend are quickly snuffed out. And so, with two opposing trendline broken in the past week (a five week downtrend was broken last week, and now a two week uptrend has been broken), we have to be neutral. The pair has been dragged back into the old 1.1695/1.1750 band once more, which seems to be very much neutral territory now. Momentum indicators have flattened off around their neutral points (RSI flat a shade under 50, MACD lines flat a shade under 0). This appears to be a market now stuck in a 400 pip range (between 1.1610/1.2010). There would be a negative bias forming if there was a break under 1.1695 now (to open 1.1610). Resistance at 1.1830 has also strengthened in recent days. 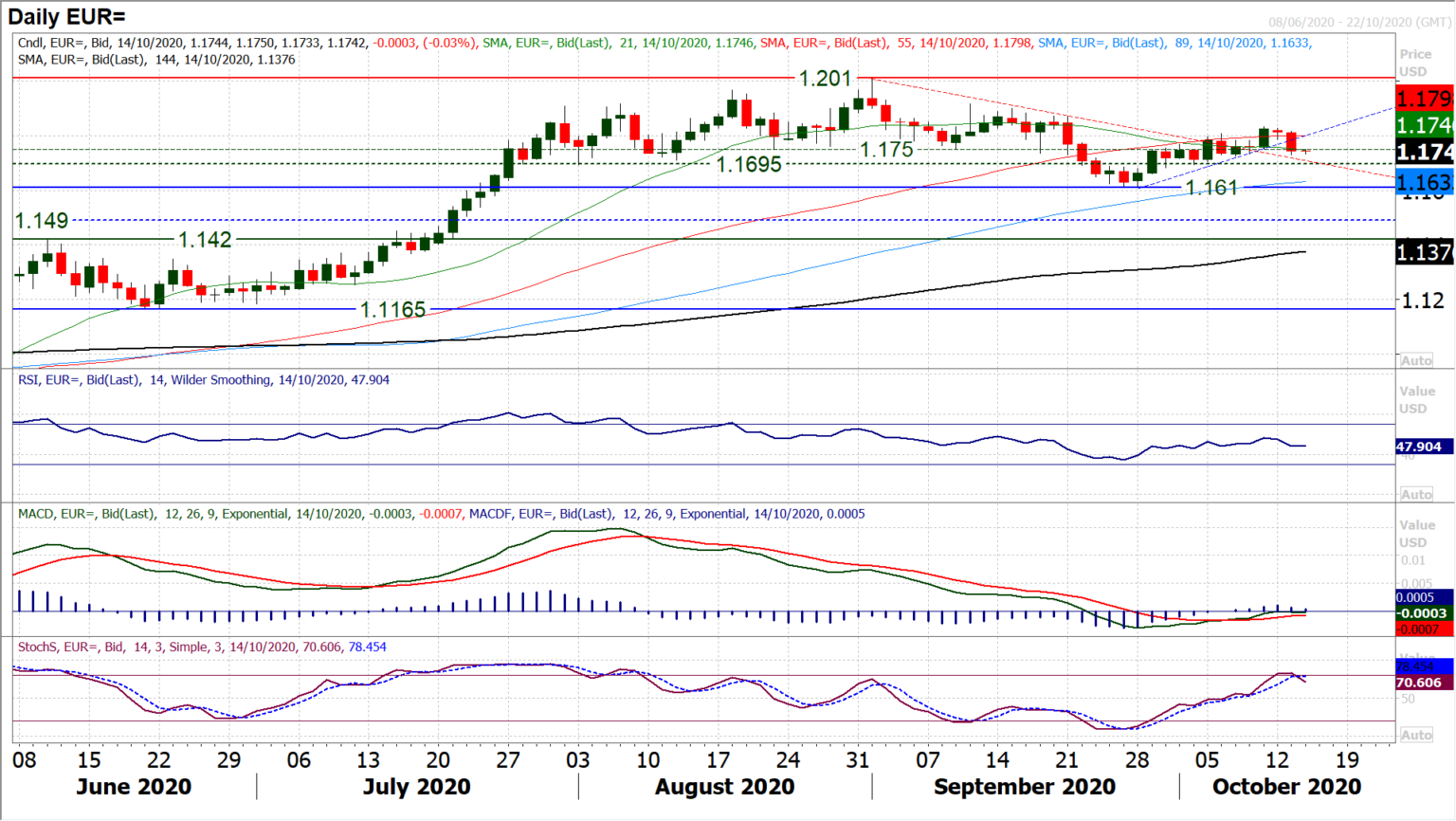 There are so many significant moving parts for Cable right now. For sterling we have Brexit trade negotiations and Bank of England negative rates chatter; whilst for the dollar there is the US election and fiscal stimulus, along side broader risk on/risk off moves. So it should perhaps be of little surprise that there has been a sharp reversal to break a trend. A lack of trend is a theme across major markets at the moment, and Cable appears to be no exception. A developing two week uptrend has been broken as a sharp -130 pip loss was seen yesterday and further downside has come today. A decisive reversal back under 1.3000 (which now has to be seen again as a key resistance), leaves the higher low of 1.2845 at risk. Momentum indicators had been building positively, but the failure points are disappointing for the bulls (RSI failing at 60, MACD lines failing at neutral). The immediate bias is negative towards a test of 1.2845 but this is likely to become a market riddled with uncertainty again. Initial resistance at 1.2945 protects 1.3000. 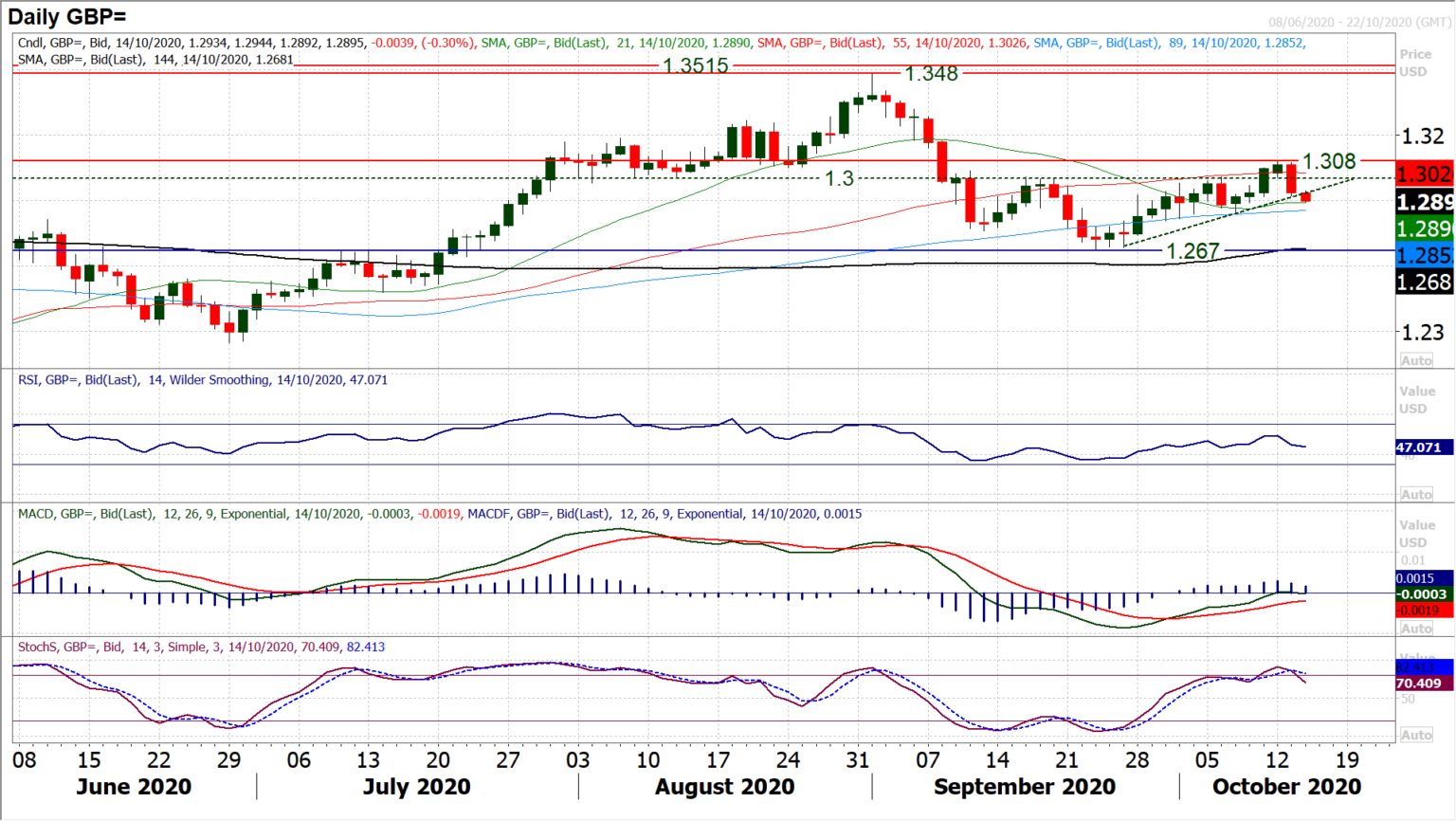 As with several other major currency pairs, Dollar/Yen is developing a very mixed outlook right now. Trend breaches are becoming commonplace, with moving averages flattening and momentum indicators settling around neutral. Stepping back, Dollar/Yen is in an eleven week trading range between 104/107. Within that, it has spent the last three weeks in a 120 pip range between 104.90/106.10. Ticking back higher yesterday has even neutralised what looked to be a growing negative bias within the 120 pip range. The market is all but flat this morning, lacking real intent. So, we are neutral. Below 105.20 initial support opens 104.90 again. Yesterday’s high of 105.60 now protects the old pivot at 106.00 and the October high of 106.10. Until there is a closing break of 104.90 support or above 106.10 resistance, there is little real direction of note. 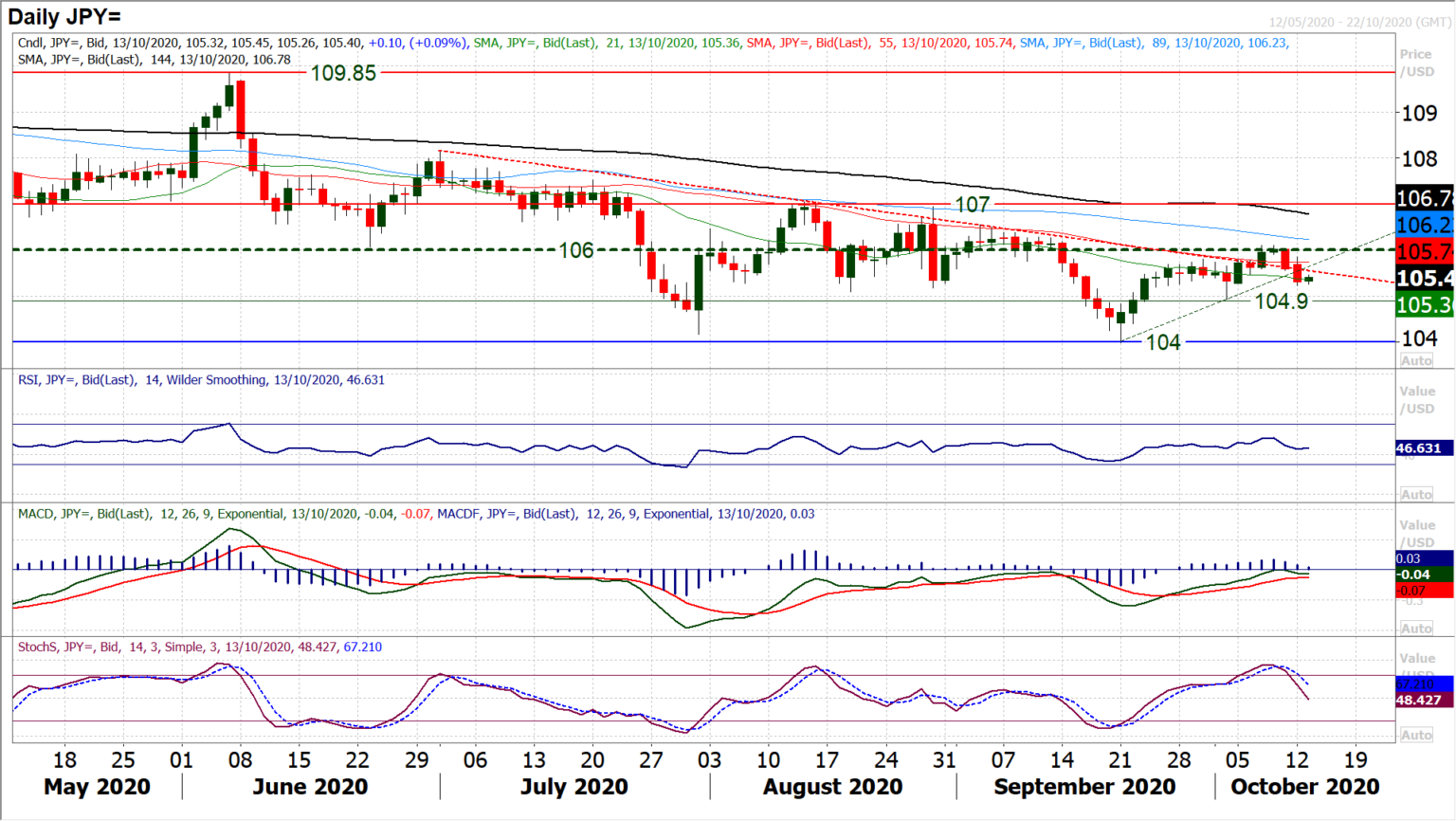 Pretty much everywhere you look across major currency markets today, there is a neutral and ranging outlook. So, it should perhaps come as little surprise that at a time in which gold is still tightly correlated (negatively) to the dollar, hints of a new trend have been snuffed out. It had seemed as though there was real intent after the bulls closed decisively higher on Friday, but the entire move has now been retraced and it is back to the drawing board. This has become a very frustrating time for the bulls, with the near term positive configuration to momentum being neutralised again. RSI back under 50 and flattening, whilst MACD lines also flat under neutral, whilst Stochastics bear cross lower. Closing so decisively back under $1902 will also have been a disappointment. However, there is still the support of a higher low at $1873 still intact and there is also the six month uptrend (around $1879 this morning) which is intact. We have to retreat to a broad neutral position once more, but are still hopeful that whilst $1873 support holds, there is a hint of positivity. Consistently showing positive closes above $1902 would help to improve, but only a close above $1933 would now really get the bulls mobilised again. Under $1873 would be negative now and re-open $1848 again. 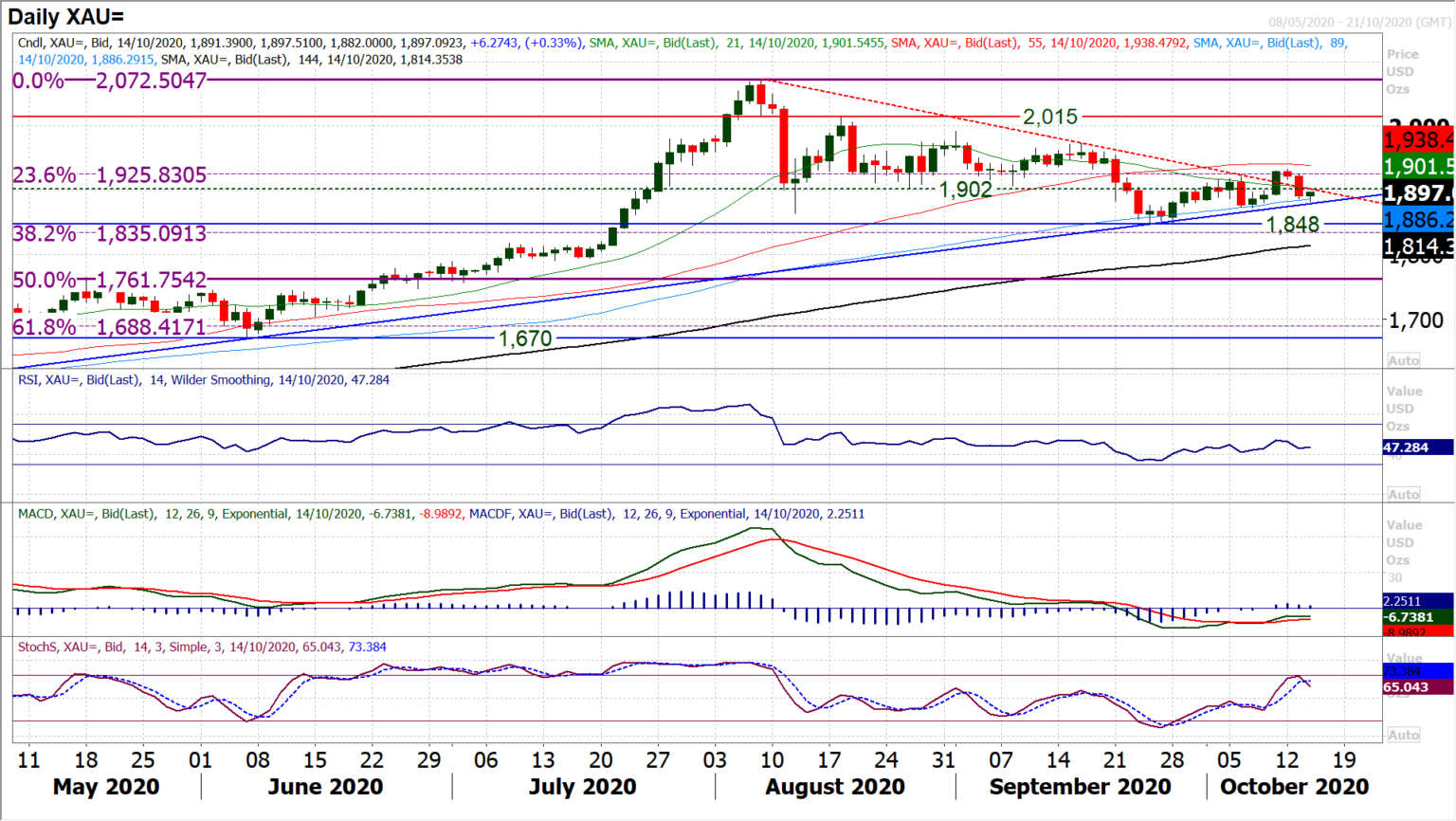 With Brent Crude holding up at the mid-range pivot of $41.30, this is sustaining a mild positive bias to the $5 range between $38.80/$43.80. Yesterday’s positive candle has helped to bolster the support of $41.30 once more. Despite this though, it is still difficult to take much of a view on Brent Crude whilst the market trades still within this $5 range. Moving averages are increasingly flattened, whilst of the momentum indicators, RSI is flat at 50 and MACD lines are drifting back towards neutral. There is initial resistance at $42.70 today which is restricting a move back towards $43.55/$43.80. 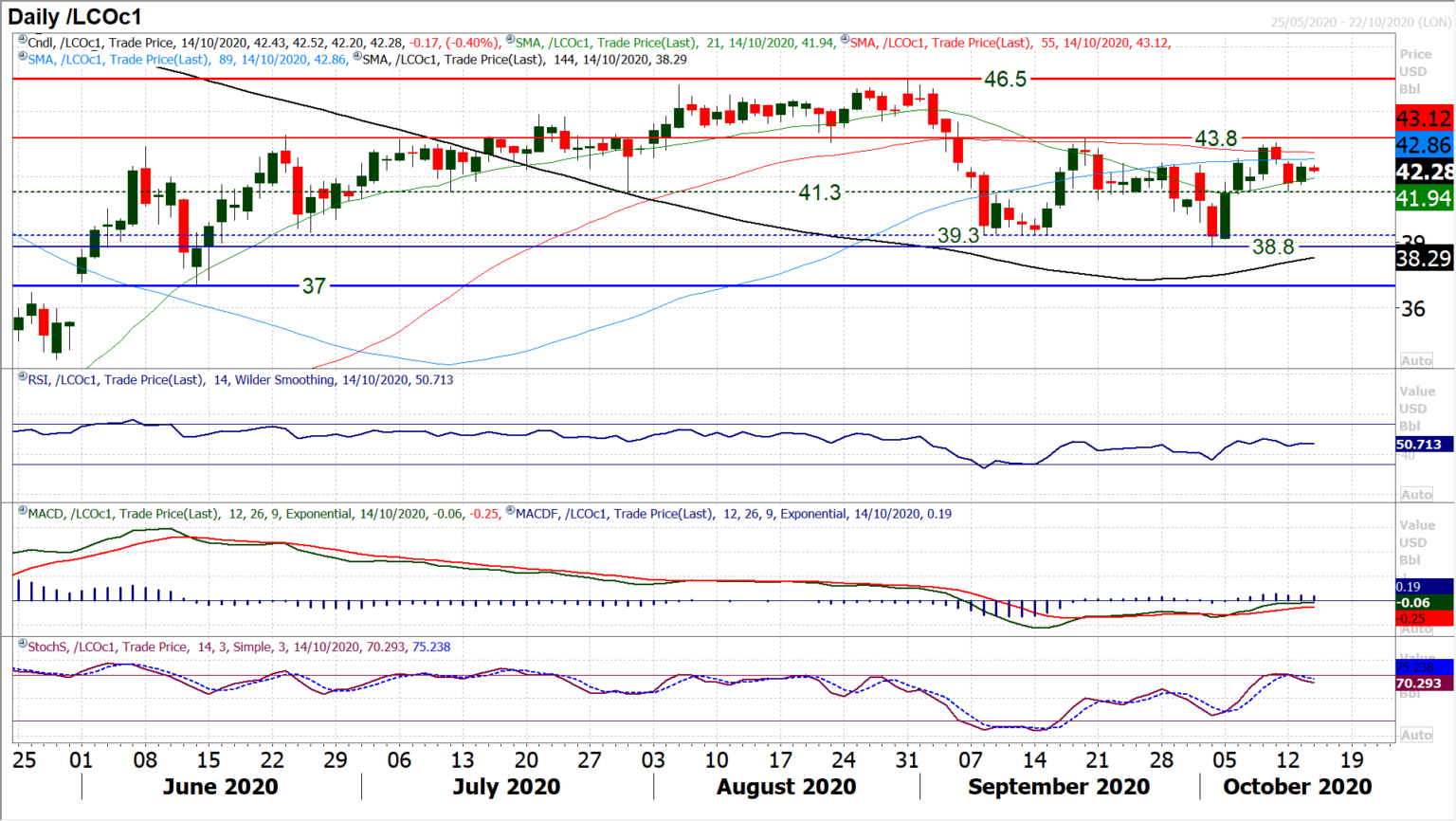 A slip back in yesterday’s session has pulled the reins slightly on the bull run, however with the near term uptrend intact should still be eyed as an opportunity for the bulls. The two week uptrend comes in to support around 28,570 today which is now above the near term breakout support of 28,365. This near term weakness should therefore se seen as a chance to buy. Momentum is strong, with RSI above 60, MACD lines rising above neutral and Stochastics above 80. There is a slight caveat with a cross lower on Stochastics but this is not a confirmed sell signal until they move back below 80. With futures finding support early today, we look for a retest of Monday’s high at 28,958 before moving on towards the September high of 29,200. Closing back below 28,365 would be a disappointment now, but the bulls are on control until the first real higher low at 27,730 is broken. 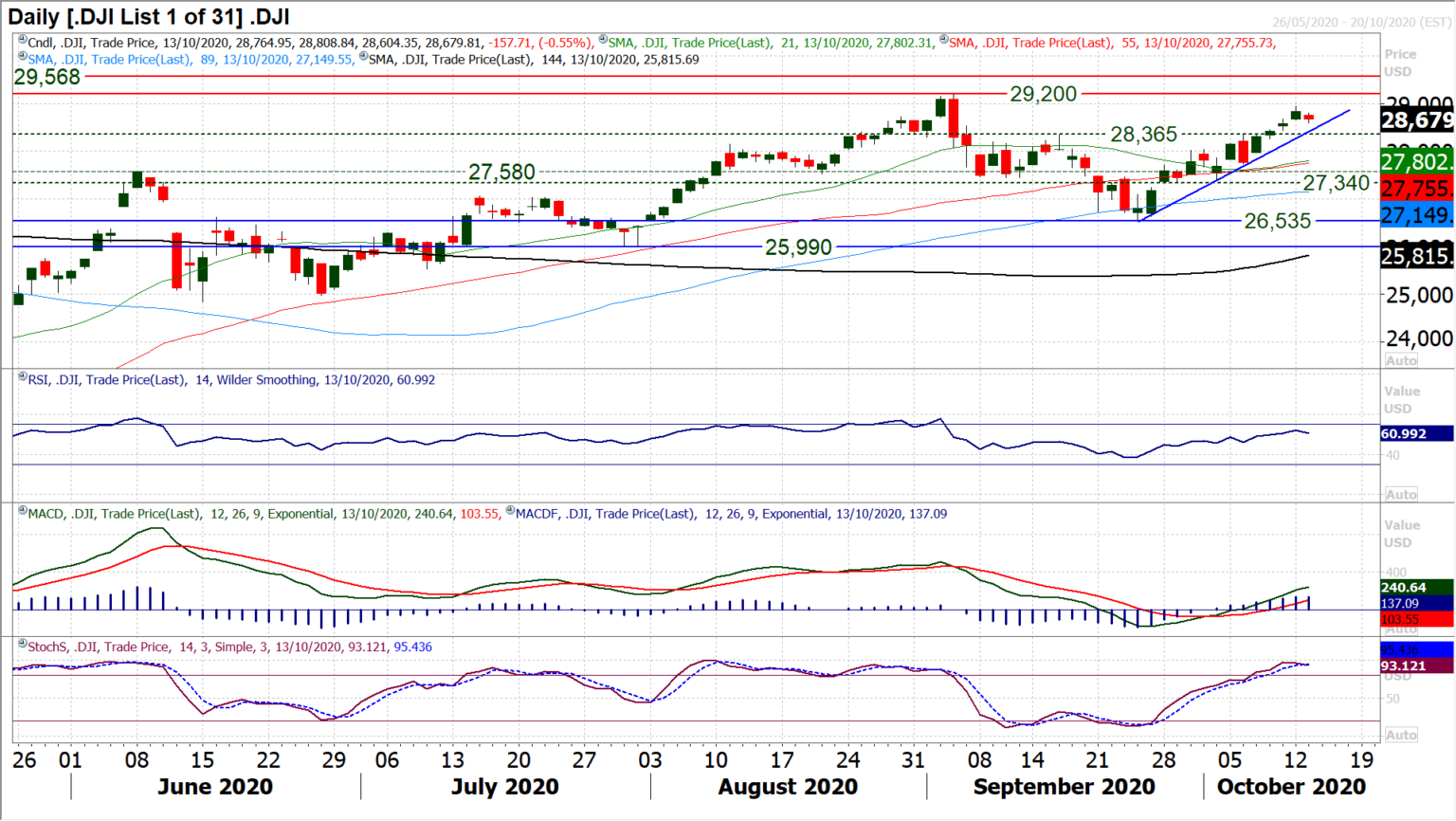