A tech rally into the close on Friday helped a recovery take hold on Wall Street and continues to have a positive bias into the new trading week. US Democrats are still trying to work on a fiscal support package that could potentially be voted through this week. If so, it could signal a sustainable shift in market sentiment which has been trading very much with the risks in mind recently. Rising COVID second wave risks at a time in which US Congress has failed to deliver on a fiscal support package in the US. With the Presidential election just five weeks away now, political risk is also a factor as Trump is already threatening to take the result to the Supreme Court if he loses. The negative risks would be lessened if a fiscal package can be agreed upon. This morning we see equities continuing on the wave of Friday’s rally, whilst the dollar strength is also rolling over. How long can this improvement in sentiment last may depend upon progress on fiscal support in Congress.

Wall Street closed with strong gains, as the S&P 500 was +1.6% higher at 3298. US futures are continuing this vibe today with the E-mini S&Ps +0.8%. Asian markets traded broadly higher (Nikkei +1.3%, but Shanghai Composite was -0.1%). European markets are showing strong gains, with FTSE futures +1.3% and DAX futures +1.7%. In forex, there is a risk positive bias, with the USD rally falling back this morning. AUD and GBP are performing well, but also we see JPY strengthening too. In commodities, there is a slight break from the trend, with gold a couple of bucks lower, silver down around -1% but also oil lower too by just under -1%.

It is a sparse economic calendar today with nothing of note to worry traders.

There are however, a couple of important central bank speakers to watch for. ECB President Christine Lagarde speaks at 1445BST with any comments on inflation or asset purchases sure to be of interest. Furthermore, there is the FOMC’s Loretta Mester (voter, leans hawkish) speaking at 1900BST.

The deterioration in risk appetite in the past week has had a significant impact to deteriorate the outlook for NZD/USD. A decisive downside break of 0.6600 completed a small top 190 pip pattern and implies a retreat towards 0.6410. This means that the next key support at 0.6490 will come under significant scrutiny in the coming couple of weeks. The bulls need to reclaim 0.6600 quickly to prevent continued downside pressure, but Friday’s bull failure candle reflects the growing sense of selling rallies as the dollar remains on its trend of strength. Momentum indicators show that this support at 0.6490 is a crucial crossroads now, as RSI and MACD especially are on the brink of taking on a decisively corrective outlook. A close below 0.6490 would mark a significant new phase of new bearish trend formation. It would open 0.6370 as the next support. An early tick higher today suggests that the market is holding ground for now, but continued failure under 0.6600 will increase the downside pressure on 0.6490. 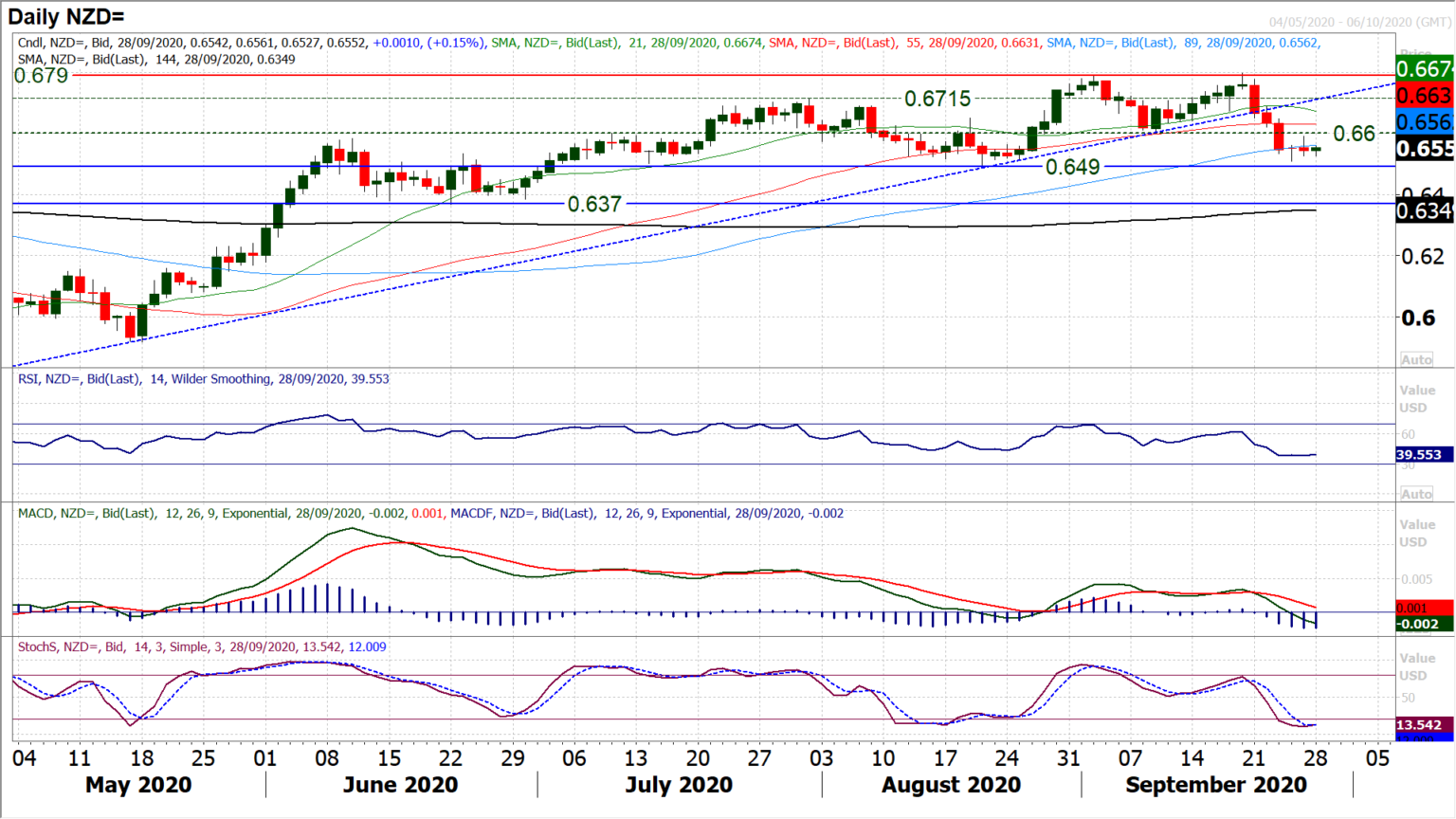 The slide on EUR/USD continues. Another negatively configured candlestick on Friday shows that the market is increasingly happy to sell into strength. The importance of the resistance from the old support band 1.1695/1.1750 is growing and how the bulls react around here will be important if a rebound kicks in over the coming days. We now see a new downtrend formation of lower highs and lower lows of the past few weeks. With the top pattern now in place, alongside momentum which is now correctively configured, we see near term strength as a chance to sell. This will at least be in place until 1.1750 resistance can be broken. A retreat towards the 1.1420/1.1490 old highs is still likely. 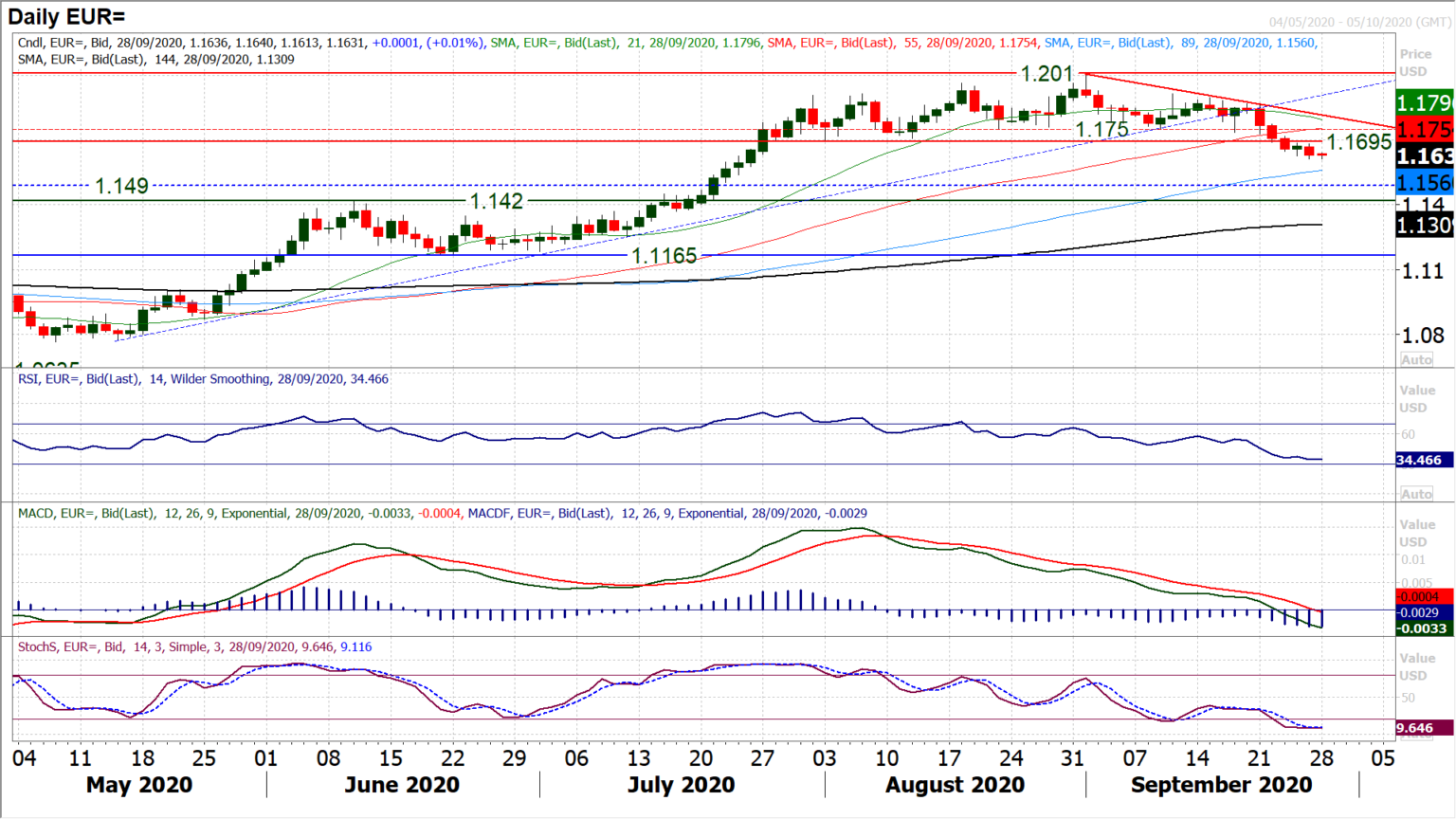 Cable has been trending lower for nearly four weeks now. This trend has formed lower highs and lower lows, and turned a bullish medium term outlook into a neutral one. As there has been an early tick higher this morning, we see that this downtrend is being tested and is close to being broken. This is coming as the selling pressure has just paused in recent sessions and Cable has formed a number of consecutive neutral to slightly positive candles. However, consolidation breaking a downtrend is not bullish, it is just questioning the pace of the corrective move. There is a pivot around 1.2860 which needs to be broken for an improving outlook to take hold. Momentum indicators are still in their corrective configuration and suggest that near term rallies are still going to struggle. We still prefer to position for pressure on 1.2650/1.2670 support, where a close below would turn the market decisively corrective. It would need a close above 1.3000 to turn Cable bullish now. 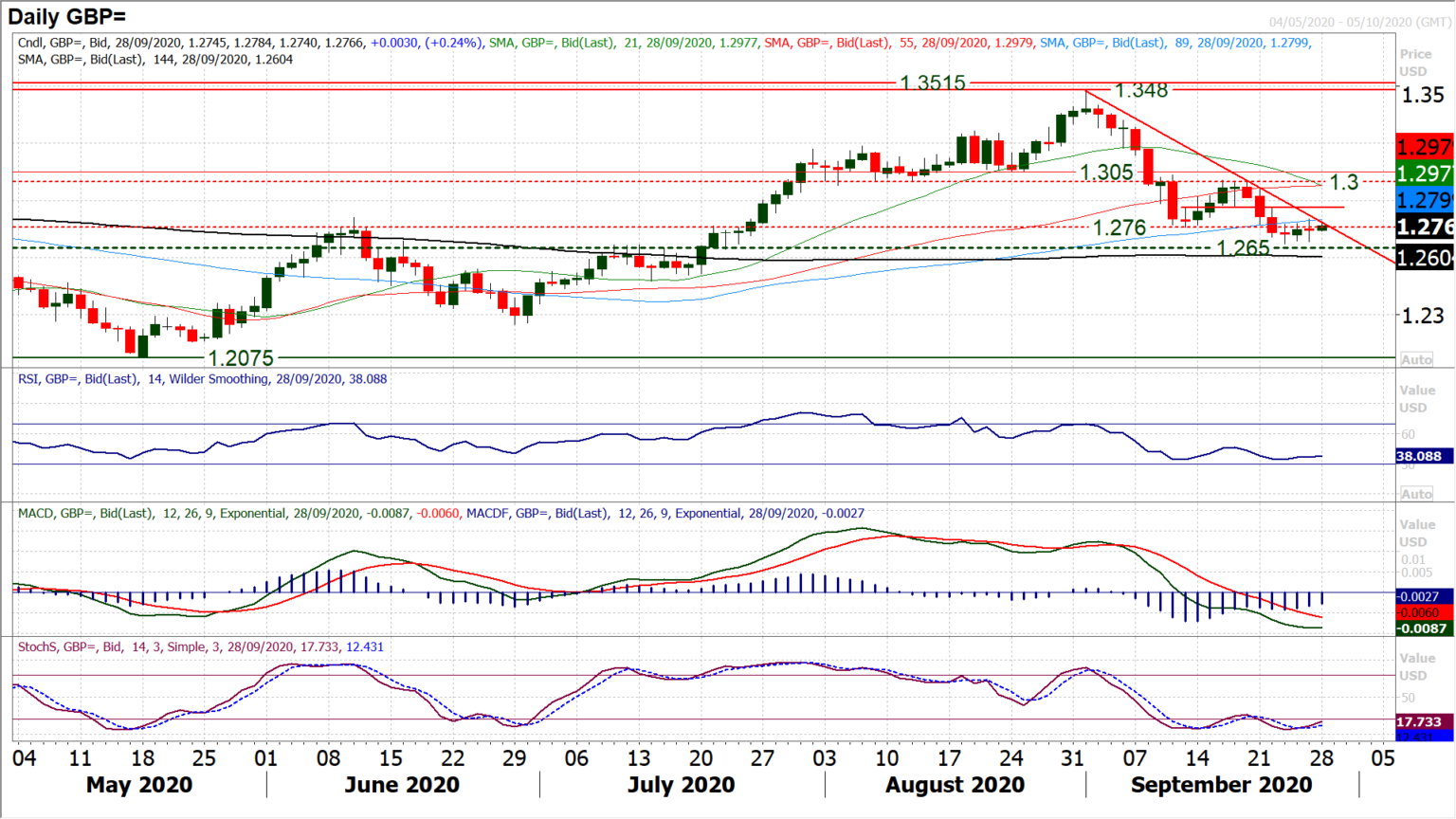 The recovery in Dollar/Yen has just had the pause button pushed this morning as the market has initially ticked back lower. The bull response to this may give an insight as to the psychology of the bulls early this week. Throughout last week, intraday weakness during the European session was repeatedly bought into as the US session took hold. This drive the market to five consecutive positive closes. We have been expecting a recovery towards the three month downtrend and 55 day moving average (currently around 106.95), whilst 106.00 is an old pivot level. Holding support in the band 105.10/105.20 will help to sustain the recovery potential. However, if we start to see early weakness confirmed into the close of the session, this could suggest that the dollar rebound is losing its way. Closing under 104.85 would confirm this. Initial resistance now at Friday’s high of 105.70. 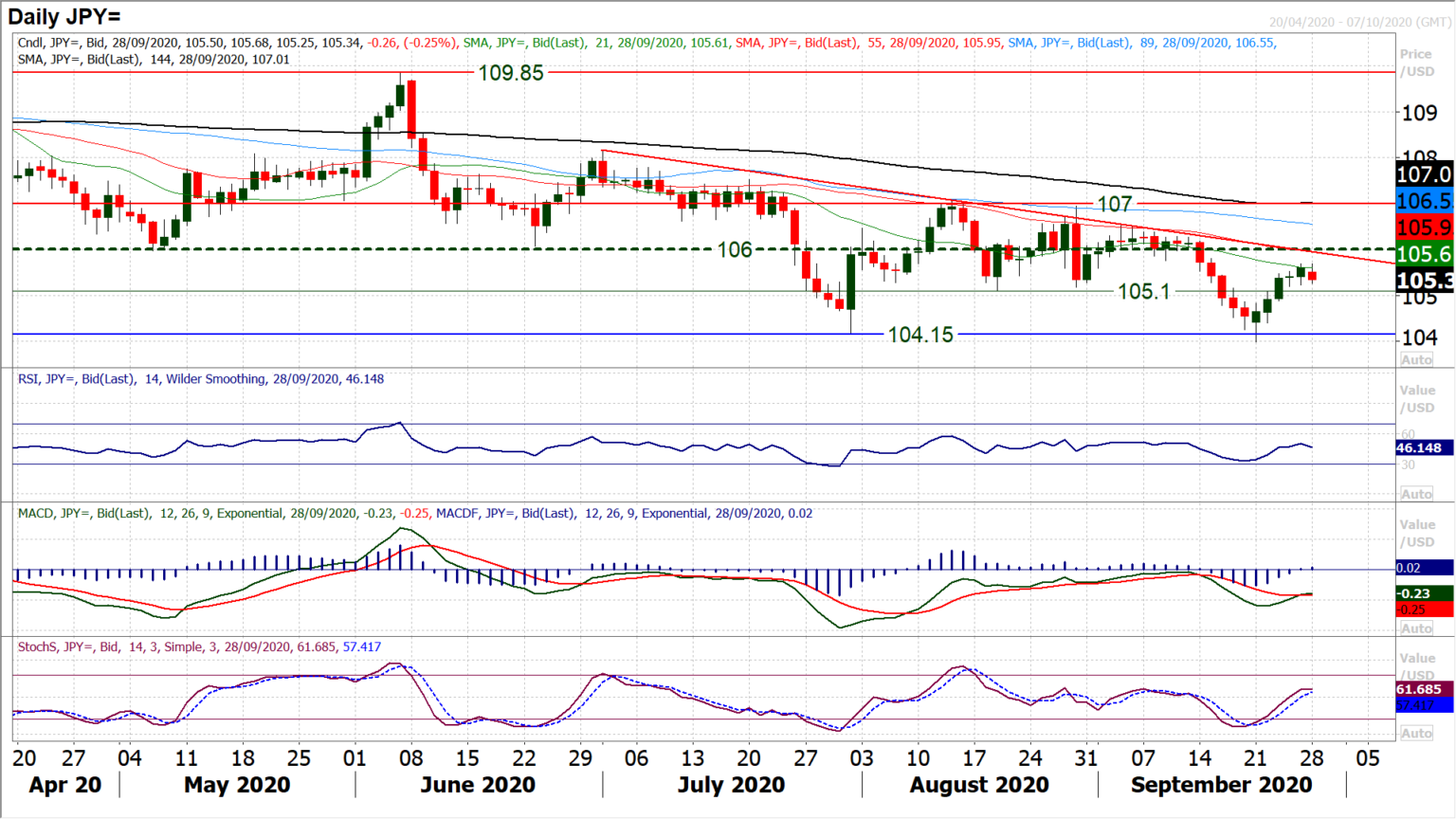 The corrective run on gold may have lost some of its momentum in recent sessions, but moving into the European session on Monday, as yet there is still little sign of recovery. The move lower continues to trade around what we see as a tentative uptrend of the past six months (which sits around $1858 today).However, this comes as gold closed below $1863 on Friday (the old August spike low) and continues to tick lower early today. Having moved below the 23.6% Fibonacci retracement (of $1451/$2072) at $1926, this implies a move towards the 38.2% Fib is likely (around $1835), whilst the next real support is not until $1818 (old July breakout). With technical momentum indicators turning decisively corrective last week, we see rallies struggling now. Initial resistance is at $1878 under the key band of overhead supply above $1902. The interesting factor will still be how gold reacts to any move lower on the dollar and also a pick up in risk appetite. Both should be gold positive, but a failure to take this on will continue the downside bias in the technicals now. 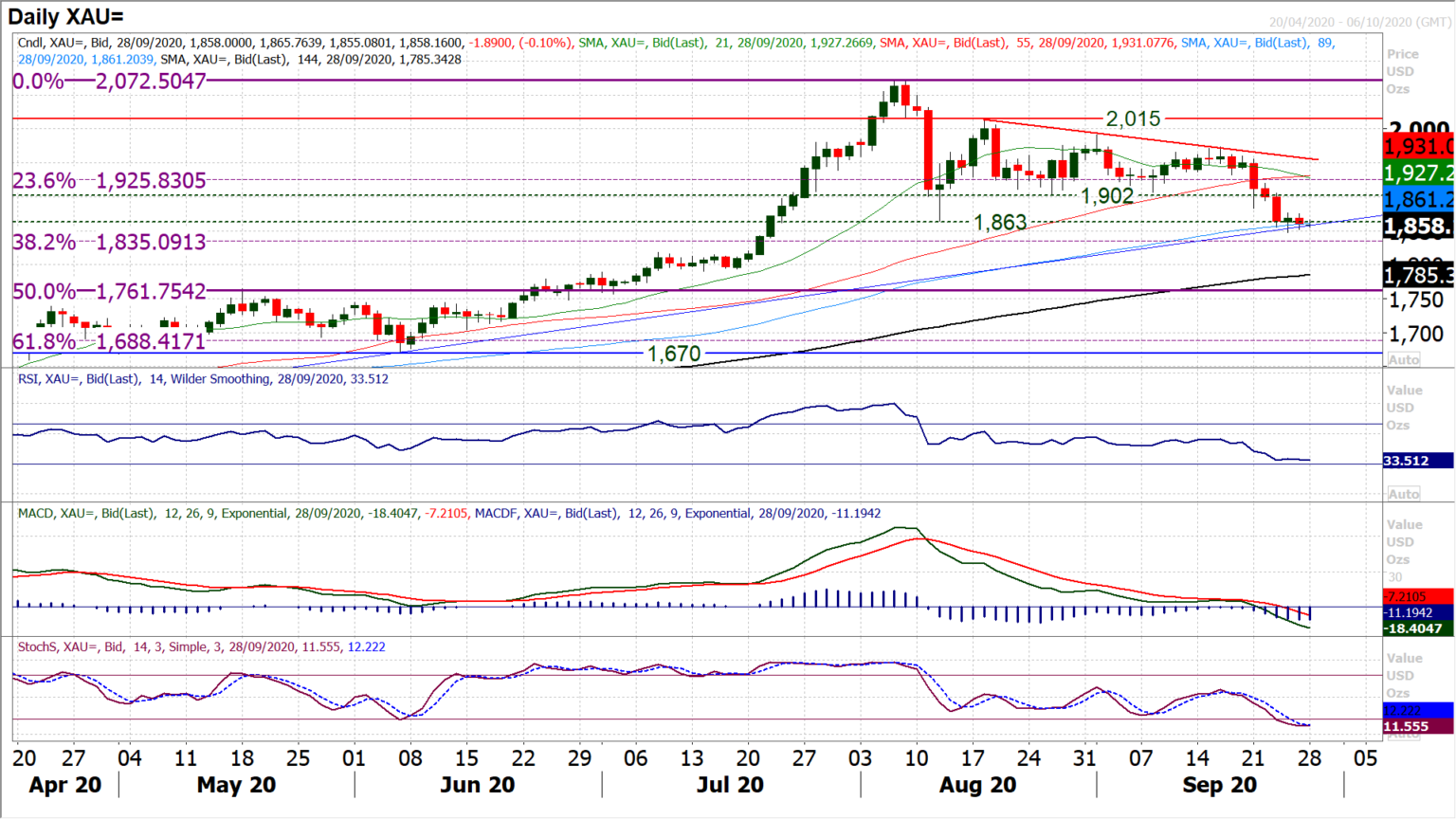 Consolidation has set in over recent sessions. Holding on to the support of the pivot at $41.30 has developed a sense of calm in the market. We discussed last week that Brent Crude in in a now four month sideways range between $37.00/$46.50. The support and resistance within this range has recently tightened to $39.30/$43.60 around which the $41.30 is now a pivot support almost bang in the middle of it all. Momentum is consolidating around neutral areas and moving averages flattening off. It all points to a very neutral outlook on Brent Crude right now. The hourly chart shows anything below $41.00/$41.30 support opens $39.30 again, whilst resistance initially at $42.30/$42.60 protects $43.60. 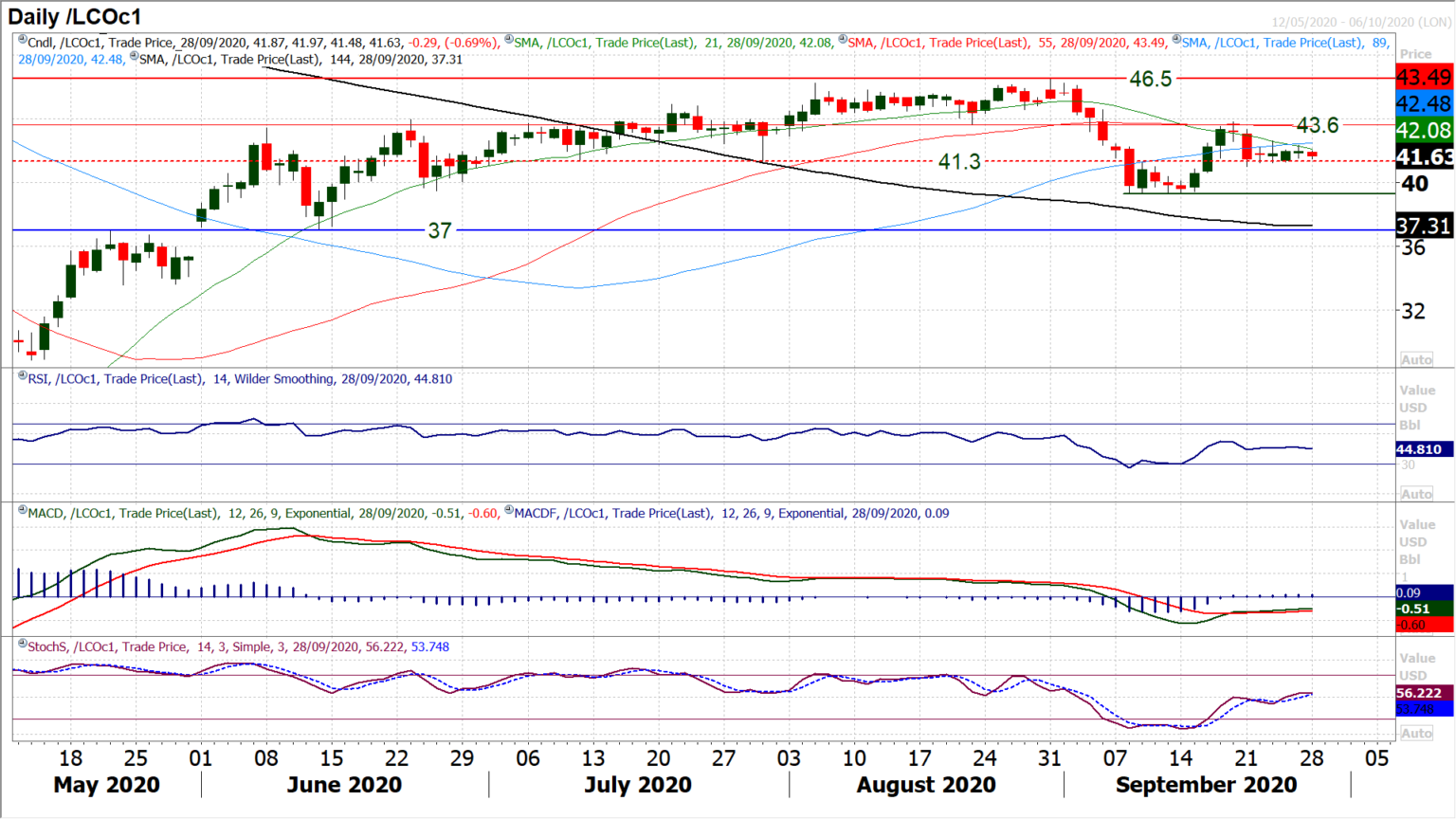 With a strong positive session on Friday and futures ticking higher today, the Dow is rebounding towards the neckline of the six week top pattern again. Resistance between 27,445/27,580 is still key. What is also the basis of a three week downtrend channel can also be taken too around that resistance today. So it means that how the bulls react around here will be crucial for the near to medium term outlook. Can sustainable recovery being to form? Momentum remains correctively configured on a medium term basis with a sense that near term rallies will struggle. A close above 27,580 would go a long way to improving this negative outlook. Thursday’s support at 26,533 will take on increased importance now. There have not been three positive closes on the Dow for four weeks, so changing this would again be part of a potential improvement. 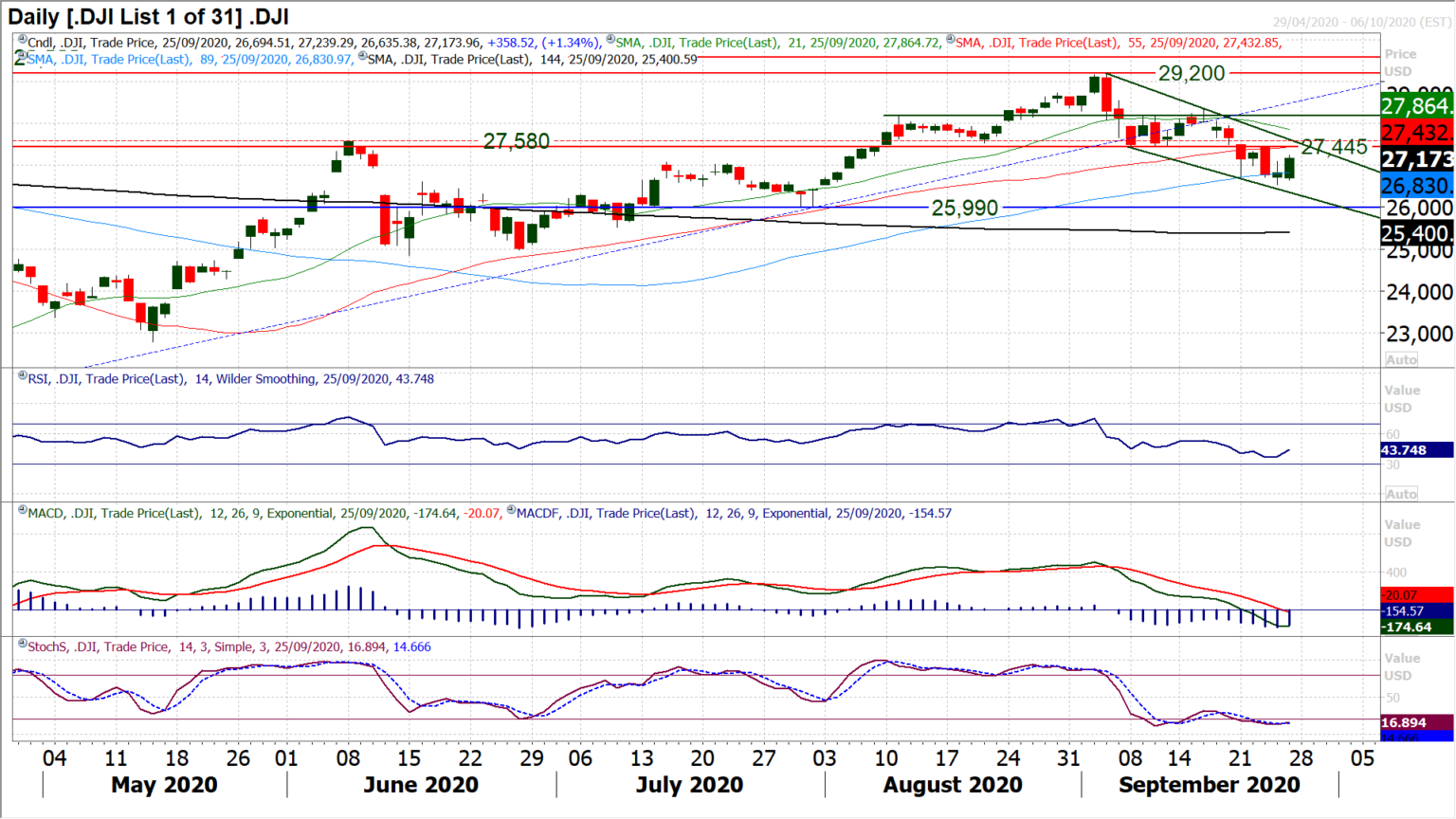