June Market Wrap: After Big Volatile Quarter, Second Half Could Be Even Wilder

June Market Wrap: After Big Volatile Quarter, Second Half Could Be Even Wilder

Post the Q1 2020 coronavirus-induced market collapse, stocks ended June and the second quarter with a strong rally. It was the best quarter for investors in at least 20 years.

While the rebound was welcome, the future isn't especially clear. Ongoing struggles to control the global and US spread of the COVID-19 pandemic continue. So, expect the market to remain volatile.

The Dow Jones Industrial Average jumped 17.8% in the quarter. That was the mega-cap index's best performance since Q4 1998.

Both indices, however, are down for the year—off 4% and 9.6%, respectively.

The NASDAQ Composite, meanwhile, jumped a whopping 30.6% in the quarter, the tech-heavy benchmark's best showing since rising 48.2% in fourth quarter of 1999. During the month of June the index climbed 6%. 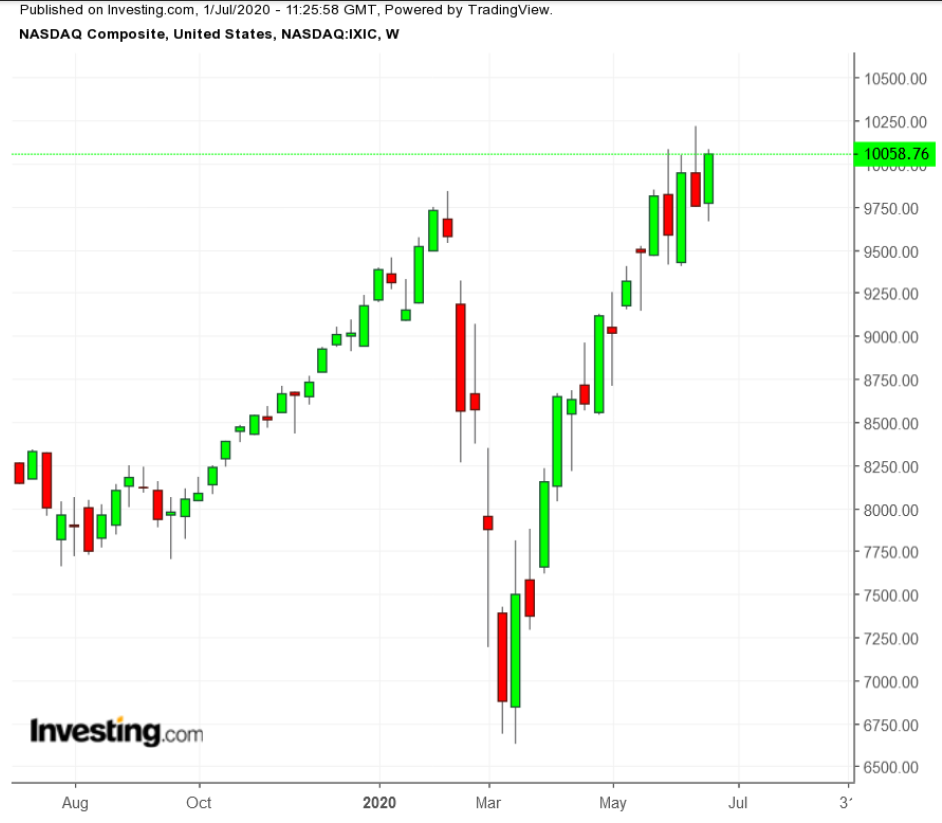 One big reason for the gap in performance between the Dow and S&P and the NASDAQ is that the components of the first two indexes try to represent the economy more broadly, whereas more than half of the NASDAQ 100's $12.9 trillion market cap consists of Apple (NASDAQ:AAPL), Microsoft (NASDAQ:MSFT), Amazon (NASDAQ:AMZN) the two classes of Alphabet shares (NASDAQ:GOOGL) and (NASDAQ:GOOG), Facebook (NASDAQ:FB), Intel (NASDAQ:INTC) and Tesla (NASDAQ:TSLA).

The small-cap Russell 2000 jumped 25% during the same timeframe, its best quarterly gain since 1991, fueled by the up-tick in biotech stocks. Still, it's off 13.6% for the year.

The quarter's winners were concentrated in tech and biotechnology stocks that investors view as driving the global economy for the foreseeable future even as they hope some will find a cure for COVID-19.

In addition, investors were cheered by central bank efforts to support the global economy via massive amounts of stimulus.

As for individual stock performance, we'll start with Tesla (NASDAQ:TSLA). 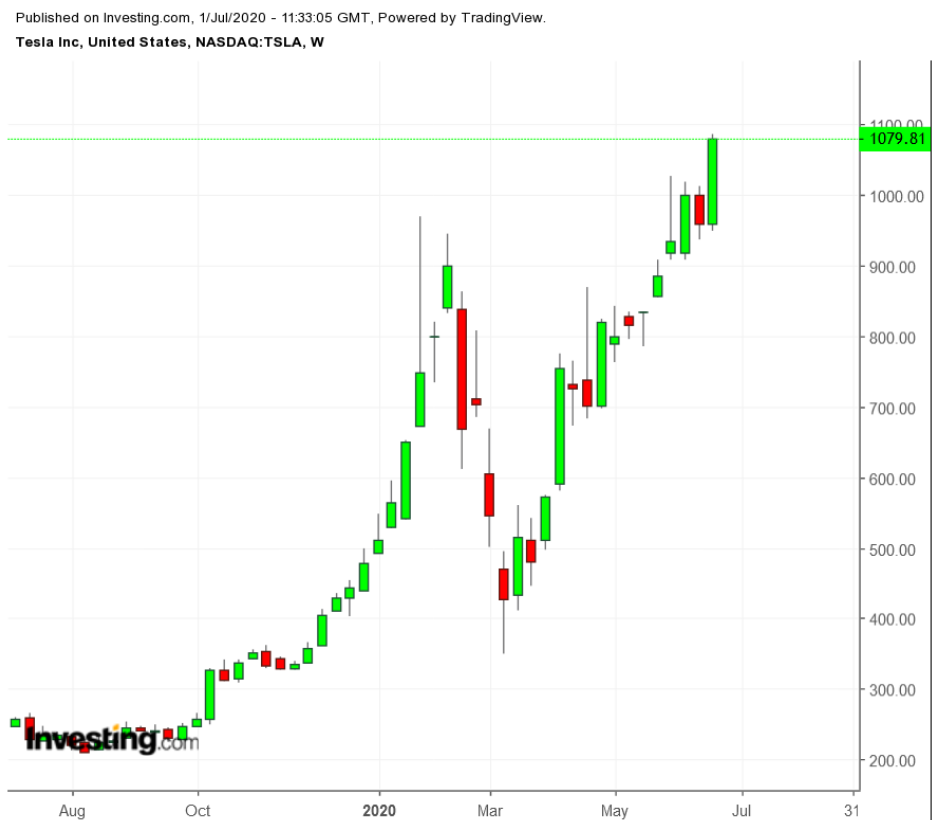 The electric carmaker seems to be the go-to stock for traders hoping to make a quick profit: shares were up 29.3% for June, 106.1% for the second quarter and 158.1% so far this year. 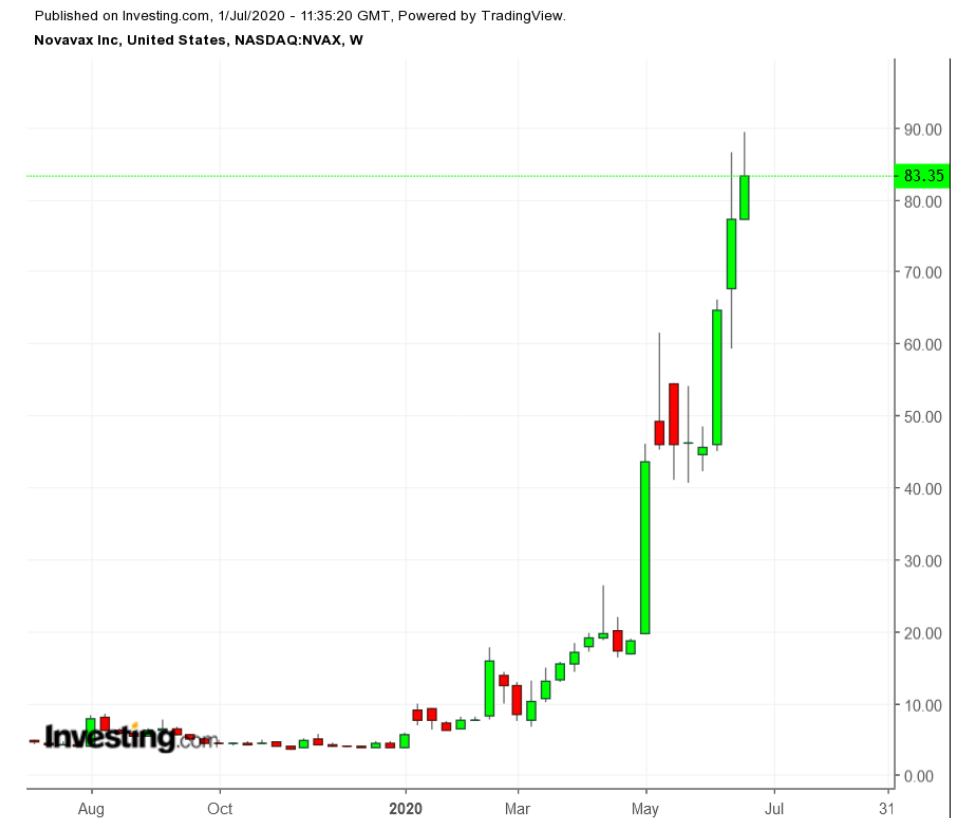 Novavax (NASDAQ:NVAX), one of hundreds of companies working on a COVID-19 vaccine, finished June higher by nearly 154%, up more than 500% for the quarter.

Garnering intense interest were shares of companies that helped locked-down populations live as normal a life as possible under the new pandemic conditions.

Zoom Video Communications (NASDAQ:ZM), whose video conferencing technology lets businesses hold meetings remotely— and old college classmates get together informally—was up 41.3% in June, 73.5% for the quarter. The stock has gained 273% for the year.

No surprise, Amazon—since it enables customer shopping online rather than brave brick-and-mortar stores—pushed higher too, up 41% in the quarter and 13% in June. The company's market cap jumped 50% from $916 billion on Dec. 31 to $1.376 trillion on Tuesday.

Payments company PayPal Holdings (NASDAQ:PYPL) also saw stellar metrics: it was up 12.4% June, 82% for the quarter and 61.1% for the year.

Similarly, online crafting marketplace Etsy (NASDAQ:ETSY) benefited too: up 31% for the month and 176% for the quarter as more of its core customers sheltered in place...and went shopping online.

And it wasn't only tech or biotech companies that outperformed. Clorox (NYSE:CLX), the maker of bleaches and home cleaning products, accelerated on strong demand for its brands. Home improvement retailers Home Depot (NYSE:HD) and Lowe's (NYSE:LOW) rose 34% and 57% in the quarter as homeowners opted to renovate or enhance their environments while sheltering at home.

At the other end of the spectrum, airlines, hotels and especially cruise lines saw shares dive in the first quarter after consumers stopped traveling.  Though many stocks in this sector bounced off their lows, most are still significantly depressed. 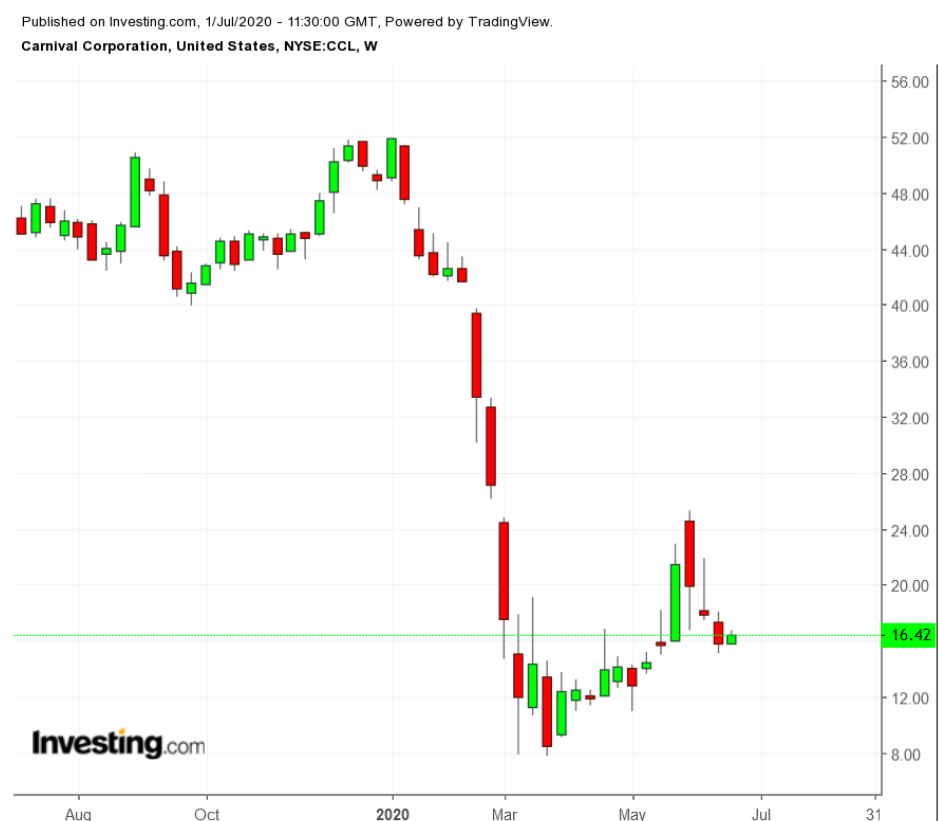 Shares of cruise-industry giant Carnival (NYSE:CCL) added 4% in June, 25% for the quarter. Nonetheless, the stock remains under pressure, down nearly 68% for 2020 because it's not clear when cruise lines will begin operating again. Or if they'll be able to attract customers.

Traditional retailers like department store chains Macy's (NYSE:M) and Nordstrom (NYSE:JWN) are suffering too: each has been closing stores and laying off thousands of employees.

The energy industry had a bit of a rebound in June as oil prices picked up from the lows seen in March. But corporate business plans from industry players for this year had forecast crude oil to possibly hit $90. Which wasn't even close.

At $39.27 a barrel at Tuesday's settlement, West Texas Intermediate rose 10.6% for the month and more than 90% for the quarter. But WTI is down more than 35% for the year. That's been a significant drag on oil and gas companies.

Royal Dutch Shell (NYSE:RDSa)) fell 2.2% on Tuesday after writing down the value of its oil and gas reserves by $22 billion. The stock finished June up 2.3% but fell 6.3% during the quarter and is down 44% on the year.

Facebook fell 9.5% on Friday but has trimmed its losses. The stock is up 5% this week.

In a normal economy, stock investors base investment decisions on the price of an equity, the company's prospects going forward and the economic environment, including the price of money.

With 10-year Treasury yields at 0.65%, money is cheap. The Federal Reserve has vowed repeatedly to ensure that credit is available, and, as the old adage says, don't fight the Fed.

The second-quarter rally reflected confidence in the US central bank plus optimism that the pandemic was coming under control or, in President Trump's narrative, 'about to disappear.'

That rosy scenario was blown up late in June as infection rates soared in states like Texas, Florida, Arizona and California where thousands flocked to bars, beaches and other gathering places, ignoring warnings that the virus was still highly infectious.

So, volatility erupted with sell-offs Wednesday and Friday and rallies Monday and Tuesday.