With all of the talk of the big tech stocks, as well as the outperformance in the Tesla (NASDAQ:TSLA) share price in recent weeks, it’s easy to forget that the move higher in US markets isn’t just about being driven by the trillion dollar share valuations of Amazon (NASDAQ:AMZN), Apple (NASDAQ:AAPL), Microsoft (NASDAQ:MSFT) and Alphabet (NASDAQ:GOOGL).

It is true that these stocks make up some of the biggest components of the current US market rally, but we’ve also seen significant moves higher for a significant cohort of smaller US tech stocks, as well as the renewal and revival of some big US retail brands.

Blowout earnings from the likes of Walmart (NYSE:WMT), Target (NYSE:TGT), Best Buy and Williams (NYSE:WMB) Sonoma has seen the share prices of these US retailers hit record highs in recent weeks, and that’s before we even look at some of the disruptive technological stocks like Zoom (NASDAQ:ZM), DocuSign (NASDAQ:DOCU), Okra and Slack Technologies (NYSE:WORK), who without the pandemic might never have realised the valuations that they now currently enjoy.

One part of the reason for the gains being seen in certain parts of the US market is the huge increases in central bank liquidity, which in turn has driven a huge increase in retail trading, with the likes of the Robinhood app driving a lot of money into areas of the market which would have otherwise been sitting in bank accounts trying to generate little or no return.

With interest rates unlikely to rise from their already record low levels, trying to generate a return on capital has never been more difficult, not only for the risk averse investor, but also for the more experienced investor, where we’ve seen active investors struggle to justify their high fees, at the same time as underperforming the wider benchmarks.

This may help explain why small investors have not only flocked to the likes of the Robinhood app, but have also flocked to open new accounts with a lot of the more traditional retail brokers, like Hargreaves Lansdown (LON:HRGV).

While the coronavirus pandemic has upended the global economy, it has also helped change the way that a lot of retail investors look at the future when it comes to investing their own money.

As we look towards a post Covid-19 world it is becoming ever clearer that economic activity as we knew it in 2019 is unlikely to return to normal in the near future. While the virus remains prevalent, the prospect of social distancing measures being relaxed remains very low indeed, which means that the global economy as we know it is unlikely to see a return to the pre-Covid world of long and short distance travel, and energy consumption that we took for granted last year.

It also means that the way we interact with each other is likely to be different in terms of everyday life, work, play as well as retail.

Over the last 12 months the S&P500 has widely outperformed other global markets, and we’ve heard a great deal of how much this strength has been dictated by the FAANG companies of the likes of Apple, Amazon and Microsoft, and certainly looking at the performance over the last 12 months you can certainly see the correlation, however that’s not the whole story, as we look across at a whole host of other US stocks that have seen some face ripping gains so far this year.

The CMC Big Tech index, which has the likes of Apple (NASDAQ:AAPL), Alphabet (NASDAQ:GOOGL), Facebook (NASDAQ:FB), and Microsoft (NASDAQ:MSFT), but also includes smaller chip companies like Intel (NASDAQ:INTC) and AMD has outperformed the S&P500 (red line) by over 20% in the last 12 months, which is perhaps not surprising given that we’ve seen the likes of Apple and Microsoft trade at all-time highs with trillion dollar valuations, while Facebook has also shrugged off its regulatory woes to trade at record highs in recent weeks as well. 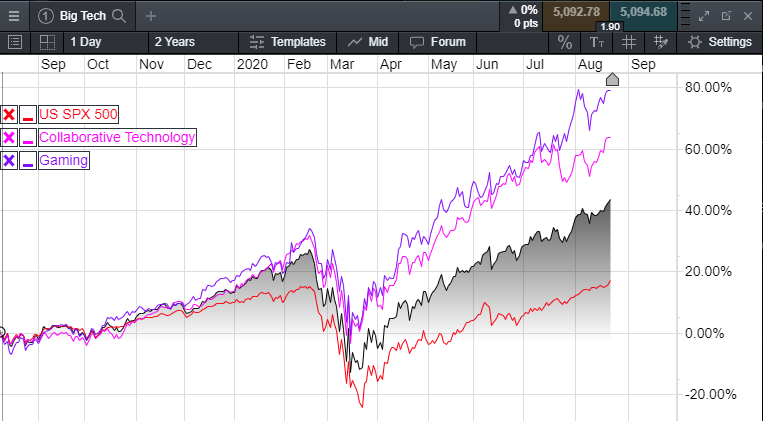 However, this Big Tech rally pales into insignificance when compared other areas of the market. To get an idea of this there are a number of other baskets, that also have these core staples, but also have newer companies that fund managers appear a lot more bullish about.

The emergence of collaborative technology, as well as streaming and gaming, which until the end of last year had more or less tracked the S&P500 week by week, no better illustrates this change, from tracking the S&P500 to outperforming it.

This divergence started to occur at the beginning of the year, before diverging more broadly and outperforming quite significantly after the market bottomed towards the end of March.

What was particularly notable was how the gaming and collaborative technology basket outperformed in the broader sell-off, remaining above the zero line even as the market started to carve out a base. In this example it is important to remember that there may well be some cross over in terms of the constituents of some of these baskets.

For example, the gaming basket, apart from containing the obvious suspects of Activision and Electronic Arts (NASDAQ:EA), also had Microsoft, Apple and Alphabet, all with 9% weightings. Take-Two (NASDAQ:TTWO) Interactive, owner of Rockstar Games has the highest weighting at 10.29%.

With the exception of Take-Two, Activision and EA, these companies are also present in Collaborative Technology, with 15% weightings, along with Zoom, DocuSign and Citrix, all of which have much lower weightings of around 5% each, but have nonetheless also contributed to these gains, with Zoom up over 300% since the beginning of the year, and DocuSign up over 150%.

We’ve also seen the likes of Peloton (NASDAQ:PTON) do well, up over 120% year to date.

Of course, when looking at the outperformance of these baskets of fairly new companies, along with their weightings, there have also been underperformers, which helps explain why the S&P500 has lagged behind as the likes of US banks and big oil drag hold the index back.

To sum up while the likes of Big tech has hogged the headlines, in terms of the current market rally, it’s been the performance of some of the smaller cap stocks that has also helped drive this bandwagon, along with the likes of certain parts of the US retail sector which saw which way the wind was blowing almost ten years ago and revamped their business models to adapt to the shift to on-line retail.

Best Buy (NYSE:BBY) is a perfect example of this, sinking like a stone in 2012, the company was overhauled from top to bottom. The company pulled out of the UK, pulled out of mobile, as well as streamlining its store model in the US, by establishing a store within a store for major brands. The company also improved its online presence and same day delivery processes, pulling it up from record share price lows in 2013 of $11.50, to be trading at record highs now, just below $120.

Of course the wider question is whether any of this is sustainable, and that remains the trillion dollar question.

For now the trend is towards the upside and as with any wave, it’s always easier to go with the wave, rather than swim against it. The trick is timing the exit out, and while we’ve seen some sharp corrections in the past few years, none of them has been of the magnitude that we saw in 2008.