When International Business Machines (NYSE:IBM) reports second quarter earnings later today, its cloud computing business will be in the spotlight. It's this unit that's the lynchpin of the company’s turnaround plan.

Unlike such major tech competitors within the cloud computing arena as Microsoft (NASDAQ:MSFT) and Amazon (NASDAQ:AMZN), IBM has continued struggling to find its place in the highly lucrative segment.

Getting this right is critical for the Armonk, New York-based company, at a time when its big clients are shunning IBM hardware and storing their data on cloud services provided by rivals. IBM is currently the fifth largest public cloud infrastructure provider, according to research firm Gartner, with less than 2% market share. 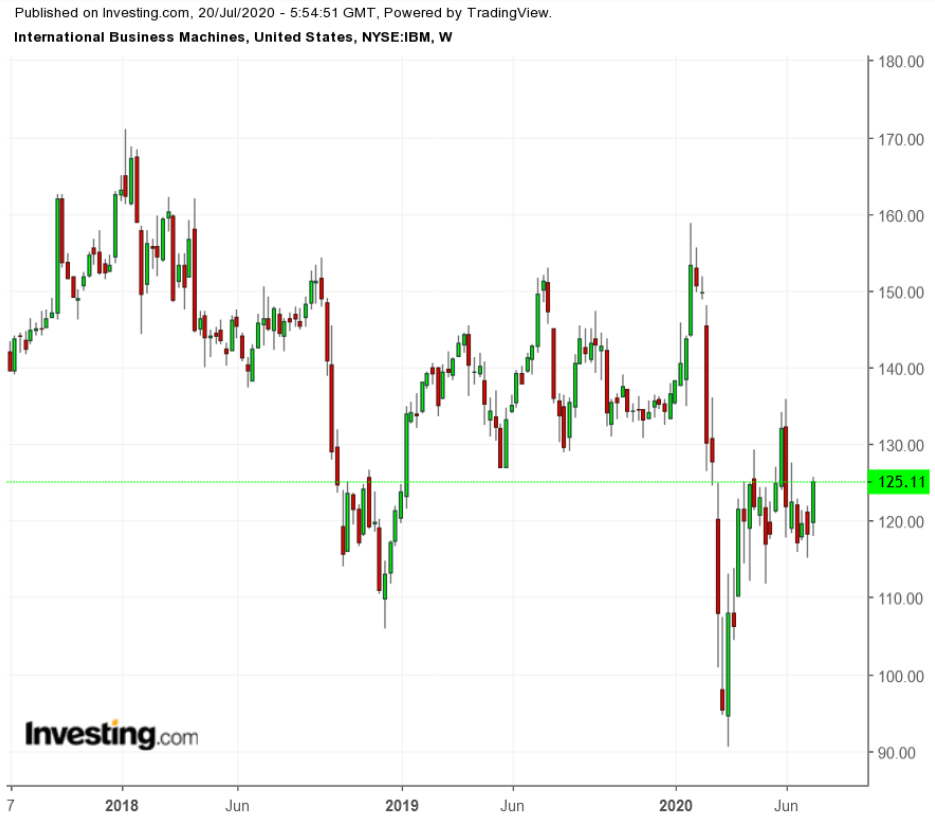 Because of sagging sales and its struggle within the cloud computing market, IBM stock has lagged behind peers during the recent recovery that started after the coronavirus-driven meltdown in March.

Shares of this legacy tech giant, which dominated computing's early decades with inventions such as the mainframe and later the floppy disk, closed at $125.11 on Friday, down about 25% from the February high.

In its last earnings report, there were clear signs that the tech giant was struggling amid the COVID-19 pandemic. The company posted lower first quarter sales, withdrew annual earnings guidance and took a large restructuring charge—all of which highlights the challenges new Chief Executive Arvind Krishna faces in trying to revive growth.

“For the next few months, we have to be focused on the stability of the business and be sure we preserve our liquidity and balance sheet,” Krishna said on a conference call as reported by Bloomberg. Moving forward, he said, the focus will be on hybrid cloud and AI, with quantum computing “coming down the road.”

The impact of coronavirus will most likely pressure earnings more substantially in the second and third quarters as IBM’s big customers delay major purchases of things such as new mainframes and software. With that factored into the stock’s current valuation, we think IBM is still a safe bet for investors who have a long-term view on the company’s turnaround plan.

To begin with, we don’t see a major blow to the recurring revenue stream which mainly consists of financial services, telecom and the public sector. These areas of the economy have largely remained immune from the impact of lockdowns and closures and will help IBM weather the downturn.

IBM's new management team, following the departure of Ginni Rometty who stepped down as CEO in April, has brightened prospects for the company’s long-term growth after many years of declining sales.

Her successor, Krishna, headed the company’s cloud and cognitive-software division. Jim Whitehurst, who was chief executive of Red Hat, the open-source software giant that IBM acquired for about $34 billion last year, was appointed the company’s president.

It was Rometty who last year spearheaded the company’s acquisition of Red Hat, betting on hybrid cloud technology to reverse the lingering slide in sales. The acquisition is adding a relatively high-margin software business to IBM’s stable of offerings. Red Hat sales rose 18% in the first quarter as the shift to remote work, automation and application modernization accelerated.

During the past decade, When it came to growth, IBM undeniably disappointed investors. But after the Red Hat acquisition, and with new management in place, we see IBM getting back to a growth path once the pandemic is behind us.