With stock markets across the world being driven increasingly by huge increases in central bank liquidity and some valuations looking increasingly expensive, it is becoming increasingly difficult to not only find value, but also to decide which sectors of the market have the potential to remain resilient in the midst of a changing global outlook.

The coronavirus pandemic has not only upended the global economy, but it has also changed the way the investors look at the future, when it comes to investing their money.

The traditional bellwethers of the business cycle of industrials, as well as oil and gas have taken an absolute beating in the past few months, and more and more investors have started to look to the future as new working patterns come into focus as the consequences of the economic lockdowns of the last few weeks continue to reverberate across the world.

Airlines and hotels will also have to reassess their outlook over the next decade as the advent of new technologies make face to face business meetings less necessary, as business travellers choose the convenience of a Zoom call to a long, or short haul trip.

Over the last twelve months we’ve seen a raft of IPO’s come to market very few of which are currently profitable. This makes investing in them very risky as investors into the likes of Uber (NYSE:UBER) and Lyft (NASDAQ:LYFT) in the last 12 months can testify all too painfully, with Softbank a notable high-profile casualty.

One way to diversify and spread this risk exposure in recent years would be to invest in specific sectors, or across a variety of sectors by way of a bespoke ETF, or other such instrument.

The new CMC share baskets product is one such instrument, constructed on the basis that investment patterns are changing, and while innovation is risky, that risk can be diversified by spreading the risk of a variety of companies.

Over the last 12 months the S&P500 has widely outperformed other global markets, and we’ve heard a great deal of how much this strength has been dictated by the FAANG companies of the likes of Apple (NASDAQ:AAPL), Amazon (NASDAQ:AMZN) and Microsoft (NASDAQ:MSFT), and certainly looking at the performance over the last 12 months you can certainly see the correlation, however that’s not the whole story.

The CMC Big Tech index, which has the likes of Apple, Alphabet (NASDAQ:GOOGL), Facebook (NASDAQ:FB), and Microsoft, but also includes smaller chip companies like Intel (NASDAQ:INTC) and AMD has outperformed the S&P500 by almost 20%, which is perhaps not surprising given that we’ve seen the likes of Apple and Microsoft trade at all time highs with trillion dollar valuations, while Facebook has also shrugged off its regulatory woes to trade at record highs in recent weeks, though the recent boycott headlines have tarnished that in recent days.

However, this Big Tech rally pales into insignificance when compared other areas of the market To get an idea of this there are a number of other baskets, that also have these core staples, but also have newer companies that fund managers appear a lot more bullish about.

The emergence of collaborative technology, as well as streaming and gaming, which until the end of last year had more or less tracked the S&P500 week by week, no better illustrates this change, from tracking the S&P500 to outperforming it. This divergence started to occur at the beginning of the year, before diverging more broadly and outperforming quite significantly after the market bottomed towards the end of March.

What was particularly notable was how the gaming and collaborative technology basket outperformed in the broader sell-off, remaining above the zero line even as the market started to carve out a base. In this example it is important to remember that there may well be some cross over in terms of the constituents of some of these baskets. For example, the gaming basket, apart from containing the obvious suspects of Activision and Electronic Arts (NASDAQ:EA), also had Microsoft (NASDAQ:MSFT), Apple (NASDAQ:AAPL) and Alphabet, all with 10% weightings. With the exception of Activision (NASDAQ:ATVI) and EA (NASDAQ:EA), these companies are also present in Collaborative Technology, with 15% weightings, along with Zoom (NASDAQ:ZM), DocuSign (NASDAQ:DOCU) and Citrix (NASDAQ:CTXS), all of which have much lower weightings of around 5% each, but have nonetheless also contributed to these gains, with Zoom up 250% since the beginning of the year.

Of course, when looking at the outperformance of these baskets of fairly new companies, along with their weightings, there have also been underperformers. How else to explain why the S&P500 has lagged so much behind in terms of performance.

We can start with US banks, which are a perfect example of how the low interest rate environment has hurt margins, not only on profits, but also how perceptions of a significant rise in bad debts is likely to weigh on their share prices for some time to come. 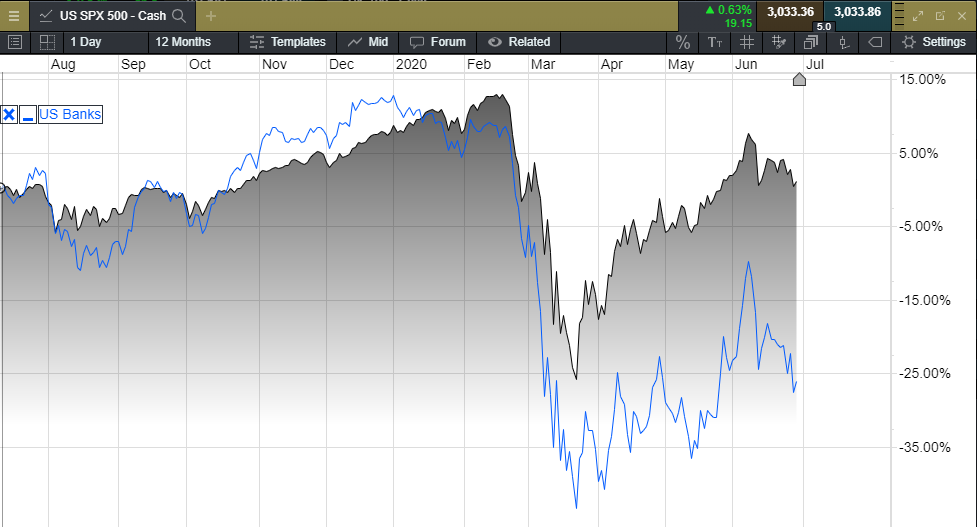 Here we see how US banks have struggled to recover from their March lows from initially tracking the wider index quite well until the beginning of this year. The reason for this is quite simple, with the suspension of dividends as well as buybacks, the US banking system is gearing itself up for a tsunami of bad loans, and a sharp rise in unemployment. In the most recent quarter, eight of the largest US banks set aside nearly $25bn in respect of this. This unlikely to be the end of any provision, and this is likely to weigh on profitability for quite some time to come.

We’ve also seen significant underperformance from the oil and gas basket, not unsurprisingly given the big declines in US oil prices, into negative territory, with Exxon Mobil (NYSE:XOM), Conoco Philips and Chevron (NYSE:CVX) all seeing big declines, along with Halliburton (NYSE:HAL) and Baker Hughes.