Gold Prices May Prepare for a Jump: Pros and Cons

Gold Prices May Prepare for a Jump: Pros and Cons

It seems that the demand for Gold assets is gradually starting to grow again. It was topped in the first days of January when the price almost reached $1960 per troy ounce (toz), but then quickly dropped after January 6 on the prospect of orderly and smooth official transition of power in Washington. When the very peak of political tension in the United States had been passed, the spot price of Gold even declined temporarily to the $1800/toz area. However, it rather seemed to be a short set piece of the whole Gold performance or just an episode.

The price recovered to $1840/toz in the course of the same day trading session. Before and after that, the price tested its $1825-1835 main support area nine times, and all this took place in a two-week period from January 8 to January 22. On each occasion Gold contracts’ value recovered again, with the most successful moment near $1875 just a few days ago. A technically remarkable fact was that each particular intraday low was a little bit higher than the previous lows, in a set consisting of the four consequent lows for the last five days (see Pic 1). 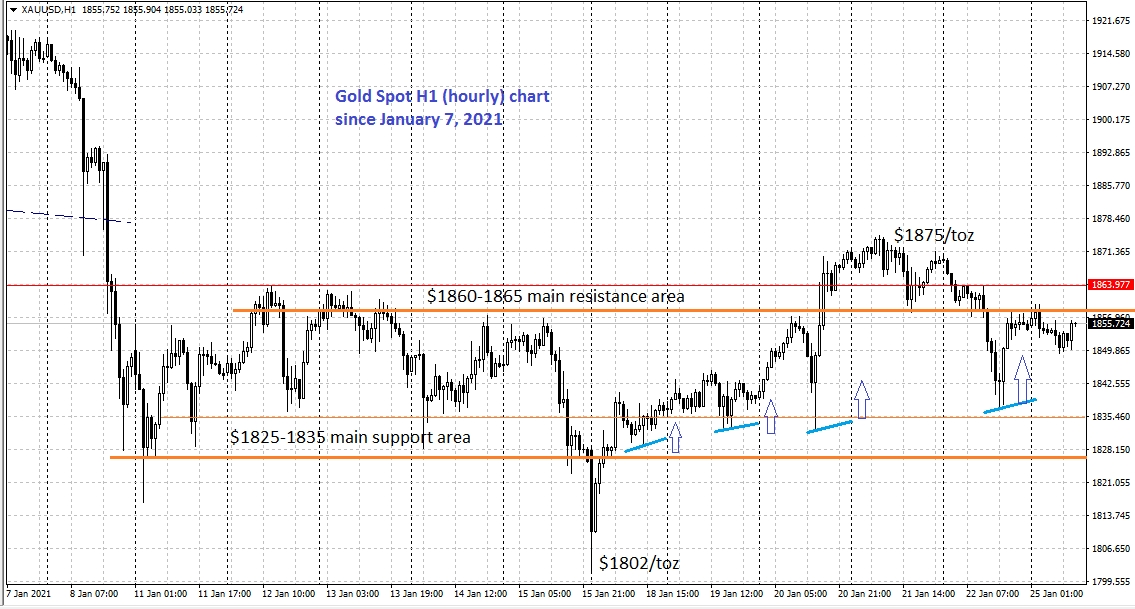 From a pure technical point of view, it may be clearly considered as a signal for further price growth with a possible recovery above $1900/toz. This scenario may become especially likely if gold prices could successfully jump again over the major resistance area, which is located between $1860/toz and $1865/toz: of course, if the fundamental background allows for such a kind of movement.

What fundamental factors may help to embody such a scenario into reality? The first factor could be a corporate earnings season which will get into full swing this week. Microsoft (NASDAQ:MSFT) is reporting after the bell on Tuesday, followed by Apple (NASDAQ:AAPL), Facebook (NASDAQ:FB) and Tesla a day later. Apple’s share price already renewed its all-time high before the very end of last Friday's session. If some companies would join it to form the next wave of stock market growth, fund managers may add gold assets to their portfolios  in order to achieve proper money management balance, which they have practiced many times over the last several years of a long-term stock rally.

Another clear argument for more expensive gold is the so-called "money printer". The U.S. Dollar is the basic unit for measuring the market's quotes of gold assets. Also the U.S. Dollar money supply volume, has already increased by almost $5 trillion due to an agenda based on anti-pandemic stimulus, and it seems to be growing even more after the Democratic team announced its additional measures for $1.9 trillion, just (or debated $908 billion) as a start. More infrastructure spending or "green deal" subsidies are planned to be coming soon, with no clear source of proposed money injections on a horizon.

The U.S. Federal Reserve (Fed) is due to meet for its first policy event of 2021 on Tuesday, with its Federal Open Market Committee (FOMC) announcement and economic projections to be handed down on Wednesday evening. But the basic expectations of the expert community seem to lie in just repeating the usual mantras by the Fed's Chairman Jerome Powell and Co., which they have already said many times: just continuing with more "accommodative" (means extra-dovish) monetary policy until the full recovery of jobs, the number of which even declined in December. The Fed previously intended to maintain its interest rates very close to zero until at least the end of 2023, and the current COVID restrictions in many US states and in Europe clearly do not contribute to the accelerated or early achievement of the Fed's goals.

The vaccine rollouts are now uneven, with relatively rapid progress in the U.K. but a much slower rollout in France, for example. AstraZeneca warned of further delays in delivering its vaccine to some European countries on Friday, due to a production bottleneck at one of its manufacturing partners. The Italian government even threatened to take legal action over the weekend against both AstraZeneca and Pfizer (NYSE:PFE) vaccine producers because of the alleged delivery delays. The escalating atmosphere around vaccination, including reports of dozens of deaths among the elderly a few days after they received their first shots, contributes to the mood to direct at least some of the investment capital into safe-haven instruments. Those may well include gold in its different forms, as gold price was almost 10% lower even when it traded around $1870/toz if compared to last year August high levels near $2075/toz.

Are there any arguments against a possible rise in gold prices within the coming month? The main "cons" argument may be related to a political tranquillisation after the U.S. turmoil election atmosphere, as well as much more determination after the Brexit divorce, already accomplished. Another potential cloud that could hang over gold could come from any stock market correction. The U.S. high-tech Nasdaq 100 index made a new record just last night on some excellent corporate reports expectations in the sector, but the major American S&P 500 broad market index is not performing in the same way this week, and the European indexes were taking the dust of the U.S. assets for the third week in a row.

In case of any stock market correction, the scenario may be similar to that which took place in September and October 2020, when markets were afraid of the second wave of coronavirus. In this case, gold may also suffer to some extent. But the technical sign that the bulls are still surrounding gold could be that  price developments could be higher than the major $1825-1840 support level. If the price fails to keep to this level just once, some stop orders may be fulfilled automatically, which could trigger a wave of massive profit-taking and, as a consequence, the price could drop to test $1800/toz or even lower levels. In this scenario, the uptrend start in gold may be postponed for an indefinite period of time, and it may resume later in sync with stock markets' new bullish impulse.