Gold is continuing to push higher as the new week gets underway. At a good $1325 per ounce, the precious metal is trading just under its 2019 high of $1326 it hit at the end of January. Gold is now not too far off the 2018 peak of $1366, where I think it is potentially heading to over the coming weeks.

There are a number of factors supporting gold prices at the moment. For a start, the dollar’s bullish momentum appears to have faded since the middle of last week and this has given most dollar-denominated assets a direct boost. Although there were pockets of strength in some areas of the economy, last week’s data releases from the US were overall disappointing. Among other things, we had a weaker-than-expected inflation report, an unexpected slump in retail sales and a drop in the latest industrial production data.

Thanks to renewed weakness in US data, investors have pushed their US rate hike expectations further out, preventing government bond yields from rising and supporting low-yielding and non-interest-bearing assets like gold.

Although the economic calendar is light today, and US markets will be closed in observance of Presidents Day, the dollar has weakened a little further at the start of this week. If we see further deterioration in upcoming US data, then the greenback could extend its decline and underpin gold even more.

There isn’t a great deal of US data to look forward to this week, however, with the exception of the FOMC’s last meeting minutes and durable goods orders in mid-week. We will have important data from other regions of the world, so some dollar pairs could be impacted, although this will unlikely cause too much volatility for gold. In the absence of any major fundamental catalyst to prevent ongoing bullish momentum, the metal could drift further higher over the coming days.

Meanwhile gold, along with other commodities, has found additional support from positive meetings on trade negotiations between China and US. While a deal may not be reached in time for the March 2 deadline, the positive vibes coming out of the latest meetings point to an eventual resolution in the trade dispute. A deal, if reached, would probably strengthen the yuan, which could be beneficial for commodity buyers in China purchasing assets traded in dollars like gold.

As mentioned, gold is just sitting below its 2019 high. Having gained ground over the past four months, the bulls will be happy to see that the metal has now turned positive for the month of February. Thus, it is on track to push higher for the fifth consecutive month.

Bullish momentum is building, in other words, which could help inspire an eventual breakout above a band of resistance in the $1365-80 range, where the metal had struggled over the past few years. We would drop our bullish bias in gold if and when we see a breakdown in the market structure of higher highs and higher lows. 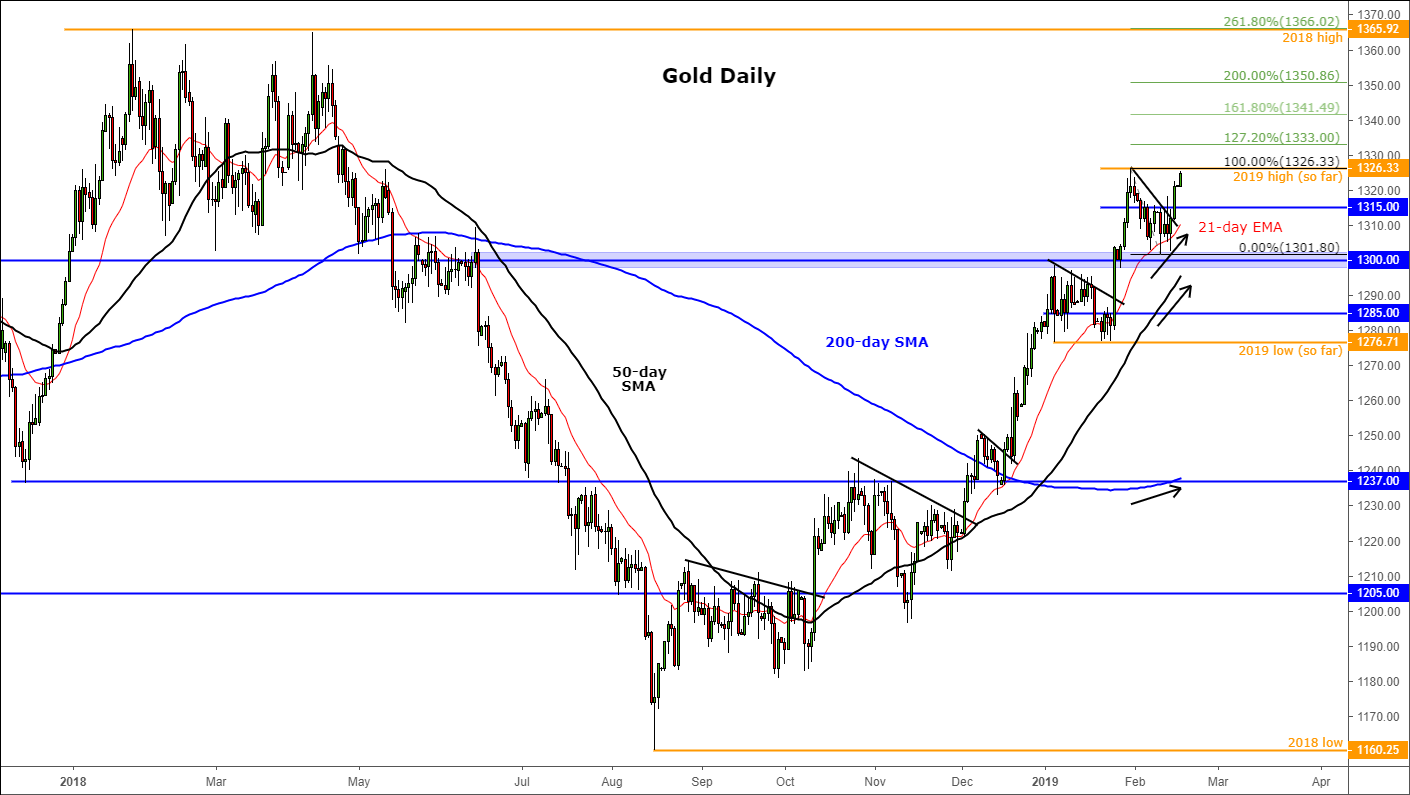