Fed Pulls USD Strength And Gold Weaker, But Is It Another Opportunity?

Fed Pulls USD Strength And Gold Weaker, But Is It Another Opportunity?

The dollar has strengthened again in the wake of the Federal Reserve meeting and with the negative correlation with gold, this has weighed on the yellow metal. This is neutralising the outlook near term but we still view near term gold weakness as a chance to buy.

The Federal Reserve appears to not have met expectations for the doves looking for a big shift for a formal Average Inflation Target (NYSE:TGT) (AIT). Allowing inflation to run above 2% “for some time” has not gone far enough apparently. Perhaps more detail was needed? In truth though, the dollar had already been impacted in the wake of the Jackson Hole speech and it was a very high bar for the Fed to overcome that would drive further dollar weakness (and hence gold strength).

This has driven a near term dollar rebound which is driving gold lower today. 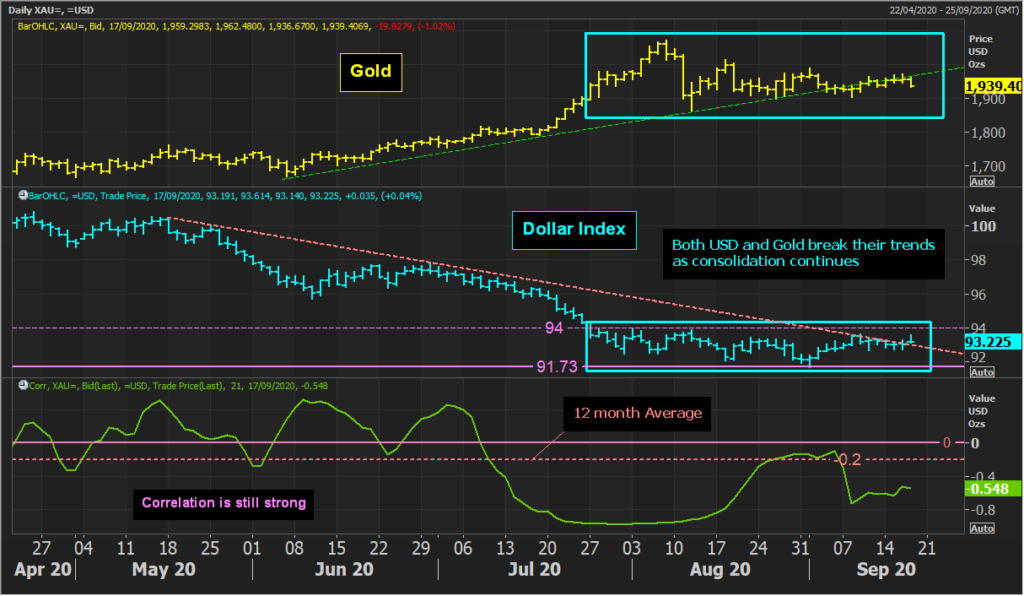 However, there is an ongoing environment for a weaker dollar now. It is interesting that the rebound in the dollar is still under the resistance of 93.50/94.00 on Dollar Index, so the rally is still being contained for now. As such we would view gold weakness as near term and on the basis of support forming, we would still see a chance to buy again.

It is also interesting to see that Treasury yields have barely reacted to the Fed. Gold seems to have little real correlation with yields right now and is more concerned with the dollar moves. 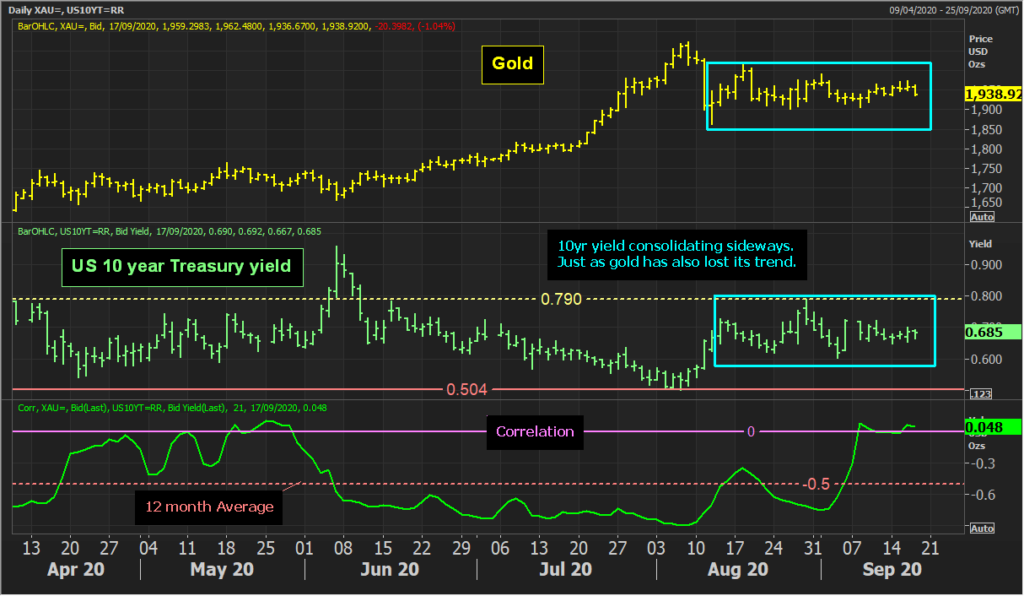 Looking longer term, we believe the outlook for gold will be driven by Federal Reserve monetary policy outlook. The September FOMC decision shows willingness to accept higher inflation and not hike rates until 2023. This will help to underpin gold in the months and likely quarters to come. Continued looser for longer global monetary policy will keep real yields subdued/negative and should mean that gold remains attractive. Subsequently, this is still a good environment to be buying gold into supported weakness.

Gold has struggled for traction in a run higher over recent sessions, and now with a tick back lower this morning, it plays into the continuation of a growing medium term range between $1902/$2015. Holding the support at $1902 with consistent closes above the 23.6% Fibonacci retracement (of $1451/$2072) at $1926 is important for the bulls, but in order to sustain what has been building as a positive bias, they will be looking to hold above a $1937/$1940 near term support band. So this early slip lower needs to be watched today.

Daily momentum indicators reflect the ranging, with RSI and Stochastics both tailing off around neutral and MACD lines flattening also around neutral. Hourly indicators suggest pressure on $1937/$1940 today but for now, the support is broadly intact. Resistance is also mounting around $1972/$1973 from recent sessions. This leaves gold sitting at a near term crossroads. We continue to believe that gold remains a buy into weakness.

STRATEGY: The gold run higher has been checked by a dollar rebound. Back under $1950/$1955 leaves the outlook less positive, moving below $1937 neutralises and a close below $1926 begins to look more negative. This puts our positive outlook towards $1992/$2015 on hold for now whilst this move lower plays out. If the supports can hold we will begin to turn more positive again. 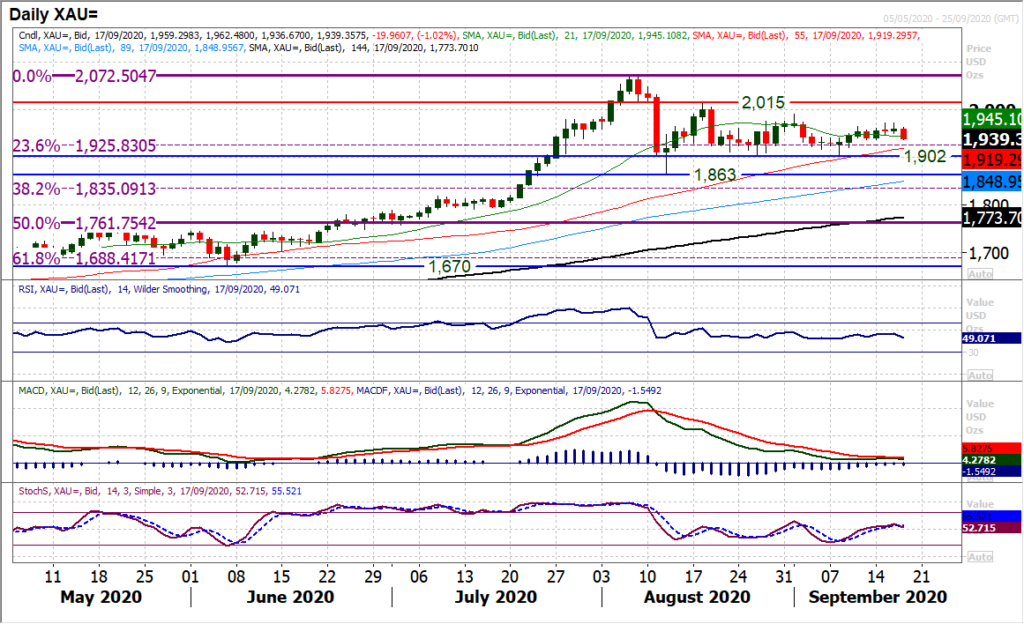 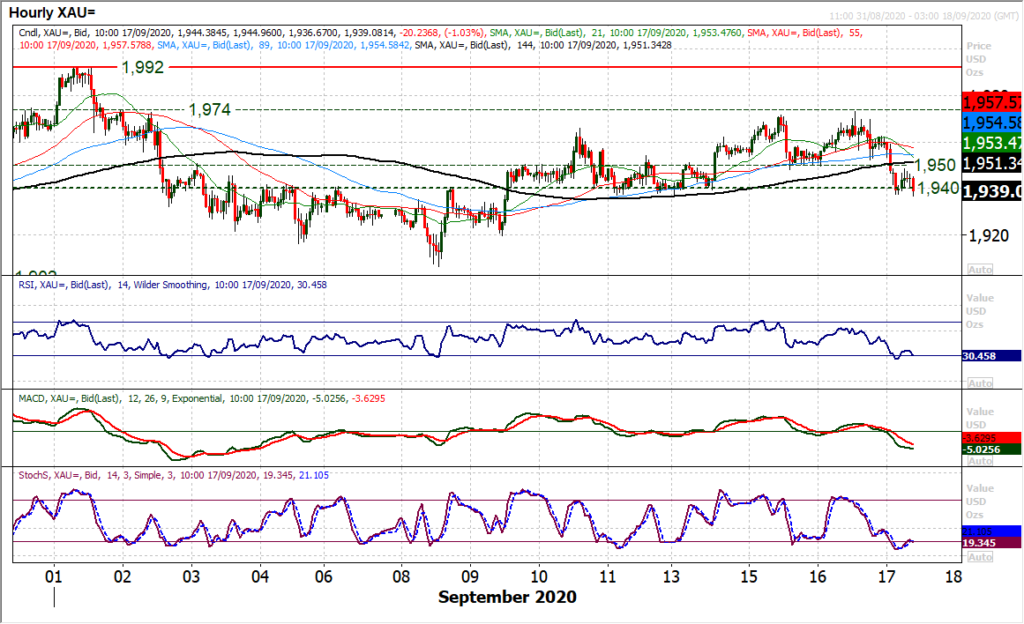