Exxon Vs. Shell: Which Energy Giant Is A Better Buy Now?

Exxon Vs. Shell: Which Energy Giant Is A Better Buy Now?

As oil prices stabilize above $60 a barrel, the time is right for income investors to take another look at some of the top global energy companies to analyze whether they’re offering any value after emerging from the latest oil downturn.

The plunge in oil prices that started in mid-2014 forced oil and gas companies, including ExxonMobil Corporation (NYSE:XOM) and Royal Dutch Shell (NYSE:RDSa) and (NYSE:RDSb), to restructure their operations, cut costs, and become more efficient.

In the process, some companies have created long-term value for shareholders who didn’t lose faith in management's abilities to turn around their companies. Exxon and Shell are the two industry giants which went through drastic restructurings during the past five years and are now well-positioned to benefit from the surging price of oil.

Between these two oil behemoths, which is the best buy today for income investors?

It’s tough to find a winner if you look at the five-year share performance of both Exxon and Shell. Both stocks are touching the levels where they were trading five years ago. Shell stock, however, has underperformed during most of this period due to its highly leveraged balance-sheet which scared away investors . 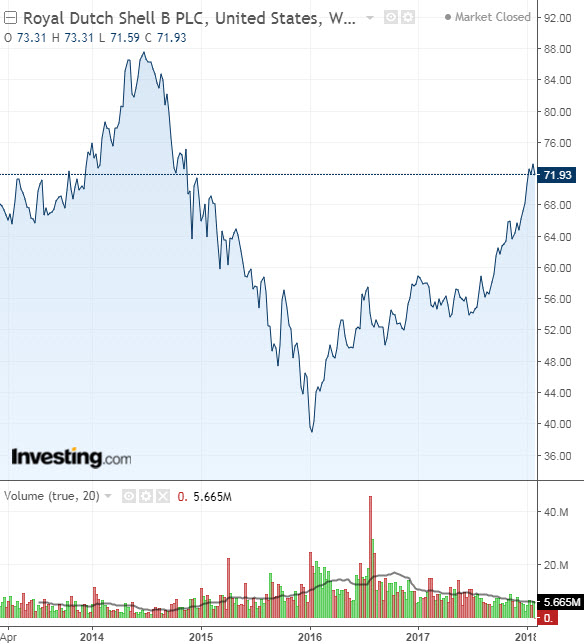 Indeed, at the start of 2016, investors were so concerned about the company’s future outlook they sent its share price down to the lowest level in a decade.

During the worst of the latest oil slump, Shell agreed to acquire BG Group. That move, which cost roughly $50 billion, contributed to boost the company's debt load by over 50% in 2016. That drag on its share performance is finally over though.

Shell price per share caught up to Exxon's during the final quarter of 2017, thanks to the company’s aggressive debt reduction strategy, backed by its plans to sell assets worth $30 billion. 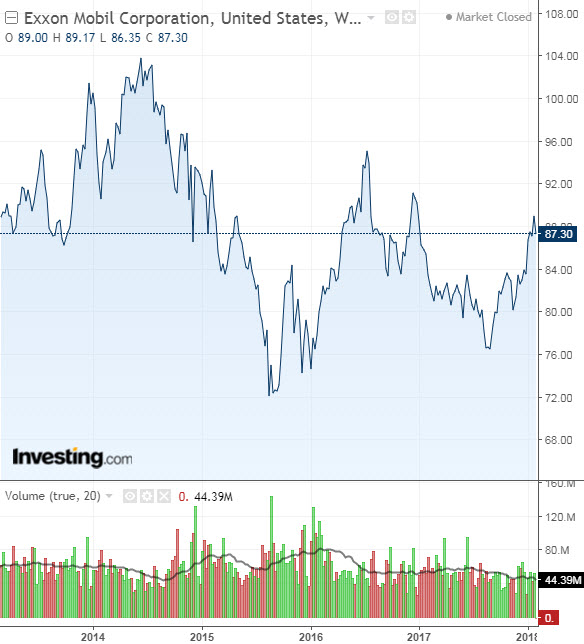 Exxon shares, on the other hand, rode the latest downturn in the energy markets better than many other oil and gas peers. The company’s tremendous scale and its asset diversification were the two main differentiating factors which supported its share price.

The company’s dominant position in upstream, downstream, and chemicals industries helped it to remain profitable, even during recessions and periods of severe commodity market consolidation.

It’s tough to ignore Royal Dutch Shell’s highly attractive 5.2% dividend yield when compared to ExxonMobil’s 3.6% payout. But a higher yield can also be a sign of potential danger.

A high dividend yield itself tells you nothing about a company unless you it comes with solid business fundamentals, strong cash flows and the company’s ability to survive in a tough competitive environment. Royal Dutch Shell has not cut its dividend since World War II, a very impressive feat which is hard to match.

At the same time, however, the company has paid the same dividend, $0.47 a share, for the past 15 consecutive quarters.

In contrast, Exxon has increased its dividend each year, for more than 30 years in a row, despite operating in a highly volatile sector. This accomplishment tells a lot about the quality of the company’s balance sheet and its ability to generate superior returns for shareholders. Exxon's current annual dividend stands at $3.06, representing about 6% annual growth since 2013.

Which Stock Provides Better Value for Your Buck?

For long-term income investors, both companies have different appeal. If you're an oil bull, Shell’s juicy dividend yield is worth considering, especially after the company’s effort to repair its balance sheet is producing results. If the oil prices remain strong and improve from here, Shell has a huge asset base from which to produce steady cash flows with the potential for growing dividends.

Exxon's yield may not be that enticing, but the company is one of the best operators in the oil business. Its balance sheet is strong and the company has a massive growth plan in place. Exxon intends to spend $50 billion on U.S. projects over the next five years, as it benefits from President Donald Trump’s corporate tax reductions.

Shell, on the other hand, is in a good position to ramp up earnings after the BG Group acquisition which swelled Shell's assets and created the world’s biggest trader of liquefied natural gas. If you're hungint for a high yield, Shell offers a good risk-reward equation.

But if you want stability and growing dividends, Exxon appears to be offering both those benefits right now.