EUR/USD Still Simmering - When Will It Come Out Of The Oven?

EUR/USD Still Simmering - When Will It Come Out Of The Oven?

Many US traders are already looking ahead to shorter week and feasting on Thanksgiving holiday on Thursday, but after simmering on low heat for the past couple months, the world’s most widely-traded currency pair may soon be ready to come out of the oven.

This morning’s Markit PMI reports out of Europe were a mixed bag, with activity in the service sector slowing further (41.3 vs. 42.2 eyed), but manufacturing activity expanding by more than anticipated (53.6 vs. 53.2 expected); both of these readings were nonetheless lower than last month’s upwardly-revised initial estimates. Across the Atlantic, the equivalent reports out of the US were unequivocally strong, with the Manufacturing PMI reading printing at 56.7 (vs. 53.4 last month) and Services PMI coming in at 57.7 (above 56.9 in October). The economic resilience on both sides of the Atlantic is impressive, but the COVID-19 pandemic, and the resulting restrictions on economic activity, are unfortunately more likely to get worse before they get better.

From a technical perspective, EUR/USD is testing the top of its 300-pip range that has held for nearly four full months now. Today’s combination of mixed European data and strong readings out of the US suggests that the top of that range may hold through the early part of this week. That said, the longer-term trend still points higher, with the 50- and 100-day EMAs both trending upward and “catching up” with price after the pair’s big surge through June and July: 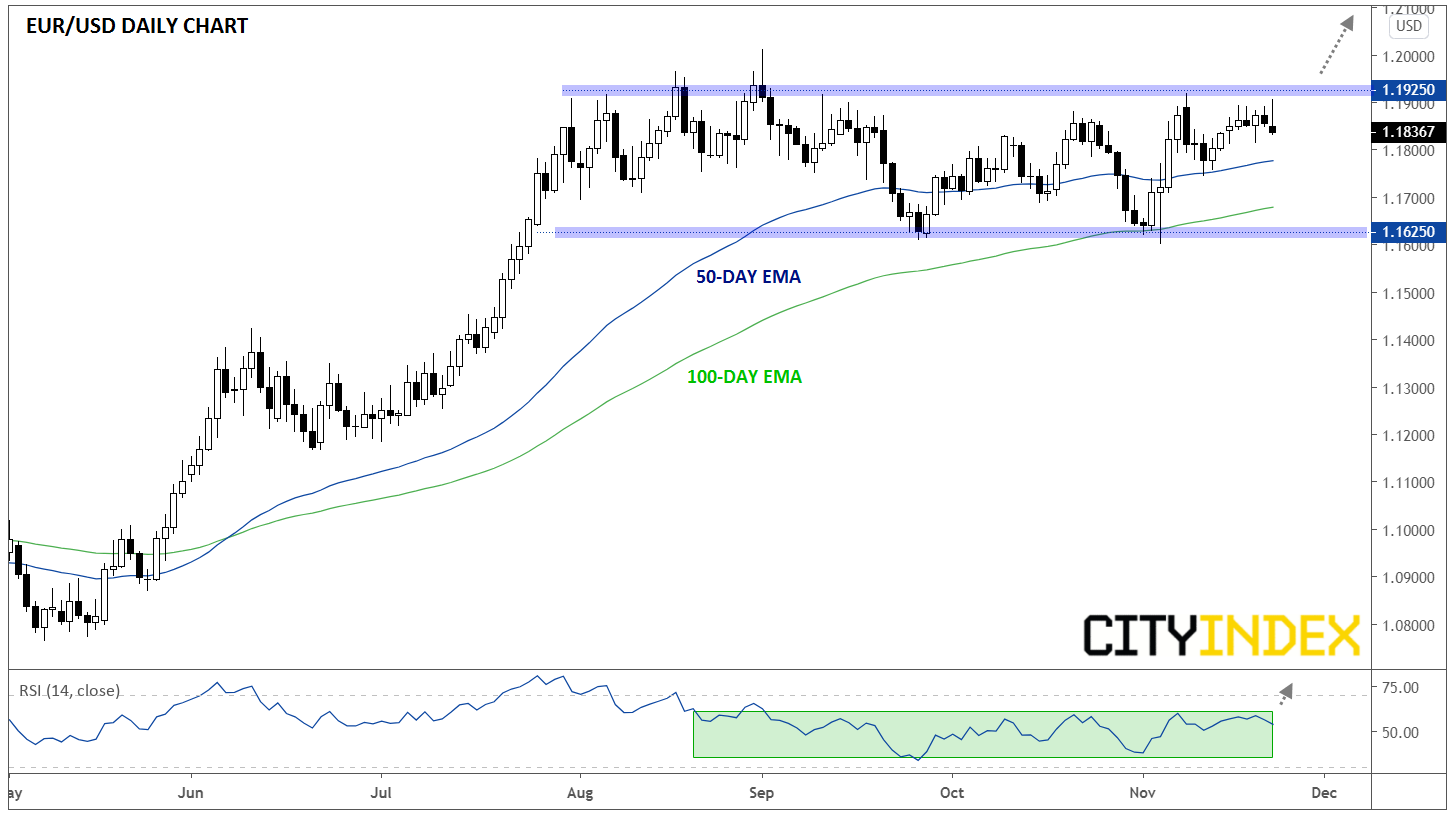 Moving forward, traders may want to “play the range” by selling near resistance at 1.1925 and buying if price approaches support near 1.1625, but the more durable setup would be to capitalize on a potential confirmed breakout above resistance for a potential continuation toward 1.2200 or higher, in-line with the dominant longer-term trend.

Traders looking for a leading or confirming indicator of a bullish move may want to watch for a corresponding breakout in the RSI indicator, which has been similarly capped around 60 since August; a breakout in the RSI would signal growing buying pressure and lend strength to the bullish view of the pair.

With trading volume and economic news (but hopefully not those Thanksgiving turkeys!) likely to “dry up” in the latter half of the week, FX traders should keep a close eye out to see if EUR/USD is heating up heading into December.