European stocks maintained a slight bullish bias on Friday after Wall Street managed to rally despite a lacklustre start. Yesterday, the S&P 500 opened lower but bulls made steady progress throughout the session and the index at the highs. The FTSE 100 inched up in early trade Friday to above 6,350 as the consolidation of the November thrust continues. BAE Systems and Rolls-Royce (LON:RR) led the way thanks to the government’s renewed commitment to defence spending. US 10-year yields continued to slip and haven’t been this low since the vaccine news broke – a reflation-rotation unwind in progress? Gold’s key support at $1,850 held again. WTI (Jan) rose to $42 but still remains very rangebound.

The end of the Trump regime appears to be as anarchic and dysfunctional as it was during its heyday. In a rare rift between the two, the US Treasury and Fed openly disagreed over the end of pandemic assistance programmes, helping to drive US futures lower after yesterday’s positive session. Treasury Secretary Steve Mnuchin called on Fed chair Jay Powell to extend 4 lending programmes by 90 days, but demanded a scheduled end to five other lending programmes and the Fed hand back some $455bn in unused funds for use elsewhere. The Fed said no, explaining it “would prefer that the full suite of emergency facilities established during the coronavirus pandemic continue to serve their important role as a backstop for our still-strained and vulnerable economy”.  Atlanta Fed President Raphael Bostic told Bloomberg these tools are an important backstop and have restored market confidence.

Covid cases continue to rip through the US, prompting new restrictions, including a 10 pm curfew in California. The good news is the rate of case growth seems to be slowing. US jobless claims rose for the first time in five weeks – getting that fiscal bridge is looking increasingly pressing. On that front, there was some relief as Senate Majority Leader Mitch McConnell said he would resume talks with Democrats over a potential Covid-19 fiscal stimulus package. Across the pond, stimulus efforts remain on pause as Hungary and Poland hold out. Budget impasses are hardly anything new in the world of EU horse-trading. EURUSD was steady at 1.1870.

Tesla shares powered to a record high at $508 as investors continue to bid the stock ahead of inclusion in the S&P 500. Indeed, according to Goldman Sachs (NYSE:GS), of the 189 large-cap mutual fund managers it follows, 157 do not own Tesla. According to their estimates, Tesla’s scheduled inclusion in the S&P 500 on Dec 21st “could result in $8 billion of demand from active US large-cap mutual funds”. That would be about 2% of the market cap. Morgan Stanley raised its price target on the stock to $540, saying Tesla is on the verge of a shift from just selling cars to sustaining a high margin, recurring software/services business. In its ‘bull case’ scenario, MS offers a price target of $1,068.

Brexit talks continue but virtually now after a delegate caught the virus. Reports this morning said EU envoys have been briefed that all three main Brexit hurdles remain unresolved. GBPUSD breached the trend line support yesterday but recovered and trades on it this morning at 1.3260. A second breach and close today under this level may call for a test of the longer-term trend line support and 23.6% on cable’s favourite anchor point at 1.30. Tick tock on the Brexit clock. 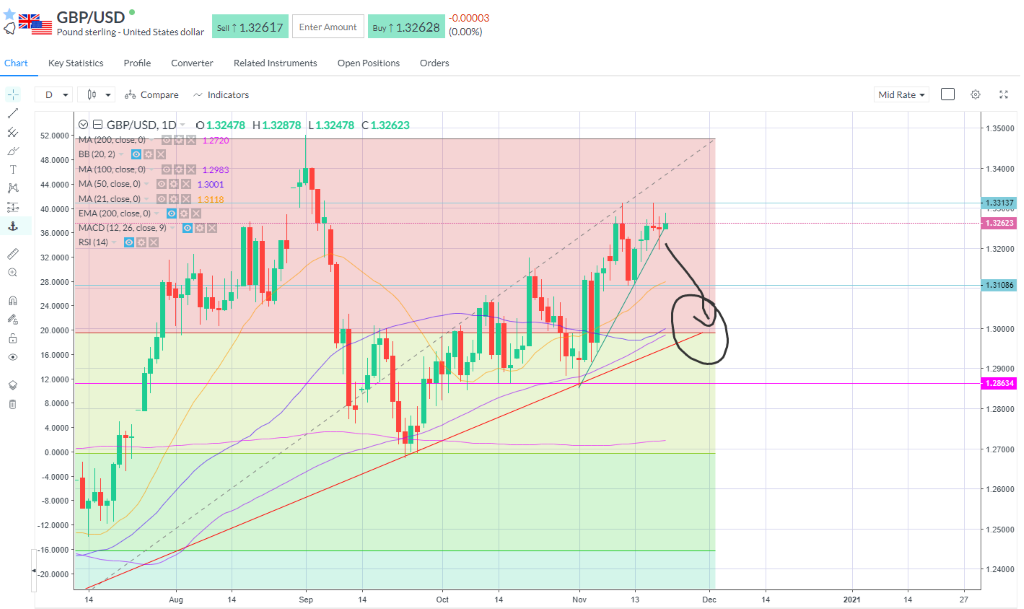 Elsewhere, after steadying around $17,400 Bitcoin pushed up to $18,400 again this morning and remains well bid above the 18k level ahead of a possible attack on the all-time highs. I would not be surprised if bulls push this to $20k by the time markets open on Monday morning. 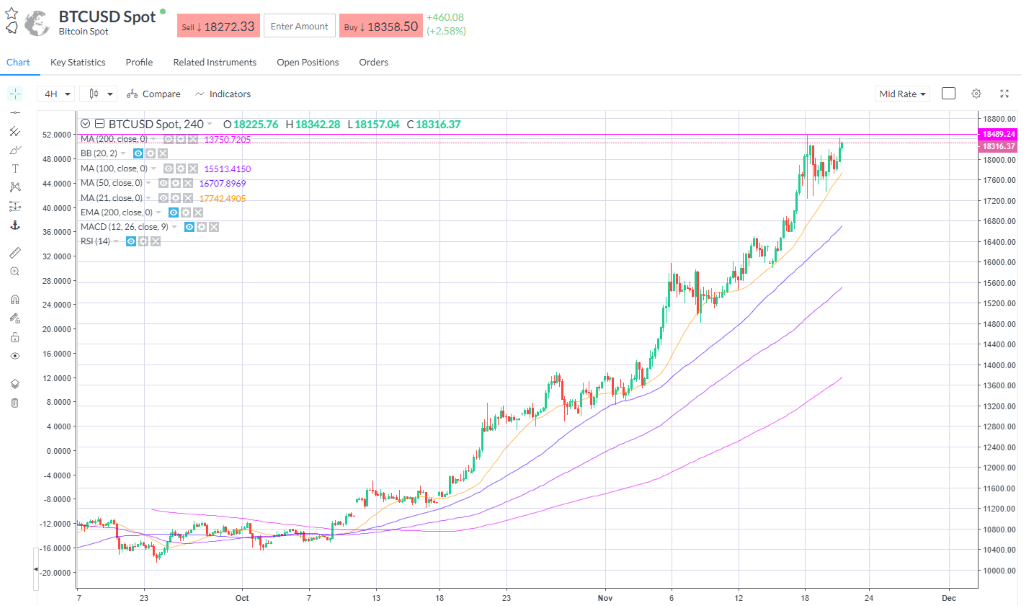