European markets rose 1% in early trade on Wednesday, extending mild gains from the previous sessions following the steep selling on Monday. Yesterday, the S&P 500 rose 1%, and the Nasdaq climbed 1.7%, whilst markets across Europe were a little more mixed with London and Frankfurt higher but Paris lower. Today sees solid bid across sectors and bourses with a slate of manufacturing and services PMIs in focus. The FTSE 100 recovered the 5,900 level, with even IAG (LON:ICAG) and easyJet (LON:EZJ) getting in on the action, rising 6% each. Safe-haven play Fresnillo (LON:FRES) was off by a similar margin as silver and gold prices come under a good deal of pressure again today. There is no clear evidence for the airlines to rally except that perhaps there was an overreaction earlier in the week.

PMIs underline the fragility of the recovery. I will issue the usual caveat about extrapolating too much from these diffusion indices, but they do highlight an interesting trend. The manufacturing sector can sustain a recovery as firms can work out how to function in the new environment, but it’s harder for many service sector businesses to operate at all, which drags on the number. Service sector companies are also much more exposed to the caprice of lockdowns. Both German and French services PMIs came in under 50, indicating contraction (survey respondents think things are worse than the month before), while both countries’ manufacturing PMIs pointed to expansion.

The UK is heading for a second lockdown-lite, which will dent the recovery and hit some sectors especially hard, but perhaps more importantly this is spurring the chancellor into action. With the furlough scheme slated to end in October, there is a risk of a jobs calamity even without further lockdown restrictions, which are a possibility. Rishi Sunak is reported to be working on new plans to support jobs, which may ease worries among investors that the UK economy could fall off a cliff for a second time just as the Brexit process reaches its finale.

Individual stocks are putting some very big moves daily which only indicates the kind of dislocation in market pricing, uncertainty about the path of the pandemic and the fact that no one really knows where a lot of these securities ought to be trading. Whether it’s value or growth, tech or travel, the unevenness of both the recovery and government policy means it’s hard to know what a fair value is. Trying to extrapolate a narrative to fit all of this is often a fool’s errand.

A case in point: Tesla (NASDAQ:TSLA) shares fell over 5% and extended their decline by a further 7% in after-hours trading, despite Elon Musk outlining the company’s plans to halve the cost of battery manufacturing and market an electric car at $25,000. The new battery tech would deliver 16% more range and x6 more power, but the company said production in volume is three years away.

There is some debate about whether Tesla’s Battery Day announcements amount to incremental or revolutionary changes to battery technology, but two things are clear: Tesla has not suddenly acquired warp speed capability, but clearly the company has a roadmap to cheaper, longer life battery technology that it will make itself and will allow it to lead the EV field for a while longer. Panasonic and other suppliers were hit with Tesla planning to make its own battery. Nevertheless, given all the anticipation around a potential game-changer in battery technology, investors were a little underwhelmed by the news. Tesla’s Frankfurt-listed shares declined 7% at the open, before paring losses a touch.

Nike (NYSE:NKE) shares shot higher after-market following an 82% rise in online sales, with the company expecting to benefit from a permanent shift to direct online sales. EPS of $0.95 beat the $0.47 expected, on revenues of $10.6bn vs the $9bn expected. Nike continues to benefit from its strong brand presence that is akin to Apple (NASDAQ:AAPL) in the smartphone space, as well as large investments in its web and mobile platforms. Shares in Adidas (DE:ADSGN) and Puma rose about 4% on the read-across.

Ant Group took a step closer to its mega-IPO after it submitted documents for registrations of the Shanghai side of the listing. The company plans to list both on Shanghai's STAR Market and in Hong Kong, with valuation estimates in the region of $250bn-$300bn.

In FX, GBPUSD traded under 1.27 in early European trade after the downside breach of the 200-day EMA presented bears with an obvious momentum play. Yesterday’s move under the 1.2760 level has opened up the path to further losses and today the pair is trading through the 100-day line and testing the 38.,2% retracement at 1.2690. Whilst Andrew Bailey attempted some push back on negative rates, saying they are not imminent, the takeaway from his comments was that this unorthodox and dangerous tool is very much being actively considered by the bank’s Monetary Policy Committee. 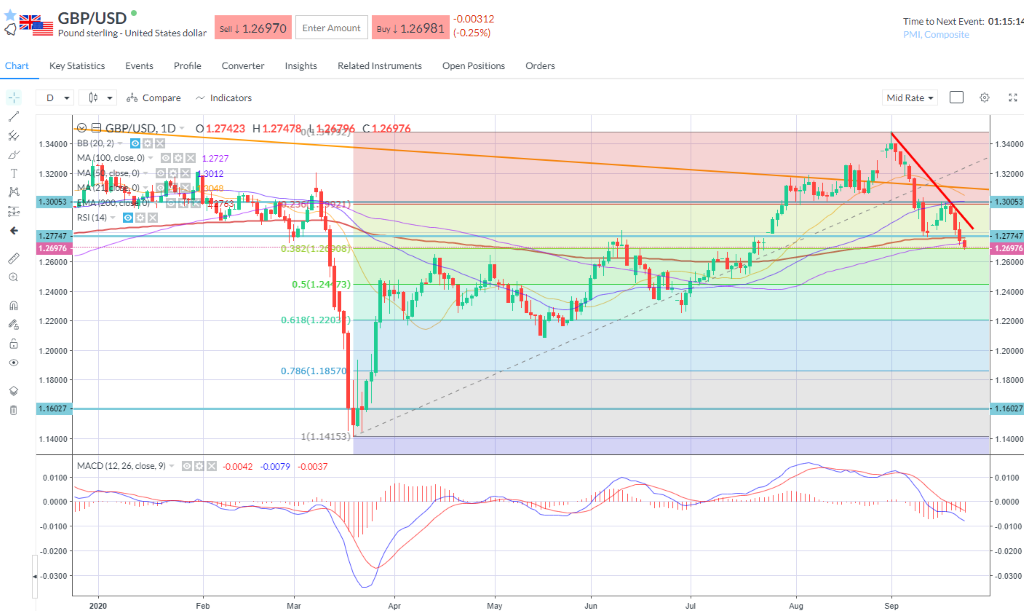 The USD continues to find bid, which is weighing on gold. DXY extended its push out of the channel, forcing gold to trade under $1,900 and test the 50% retracement around $1875, corresponding with the horizontal support of the descending triangle formed by the August lows. Silver has a bearish bias after breaching the August low. 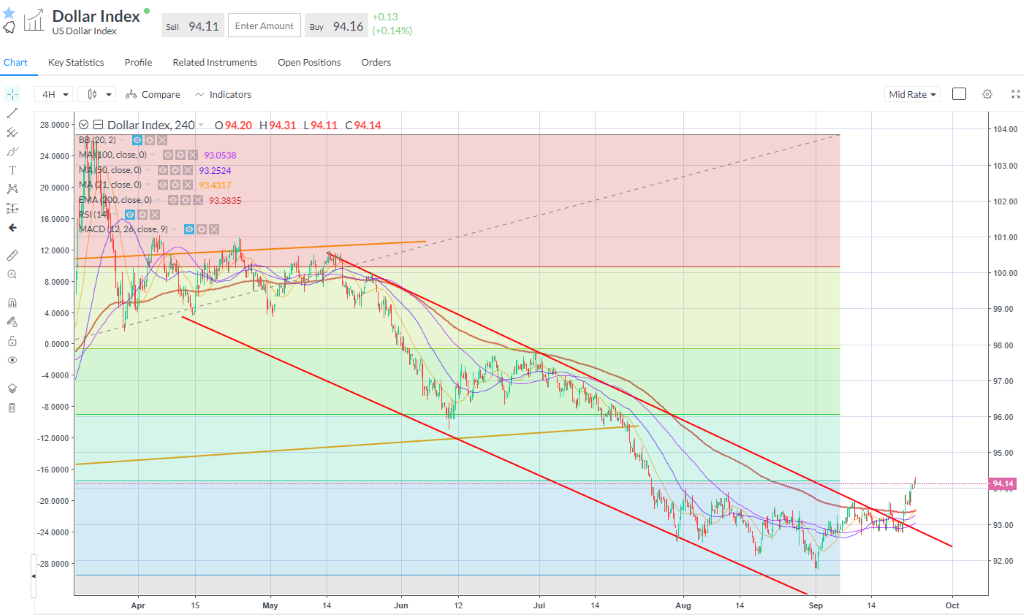 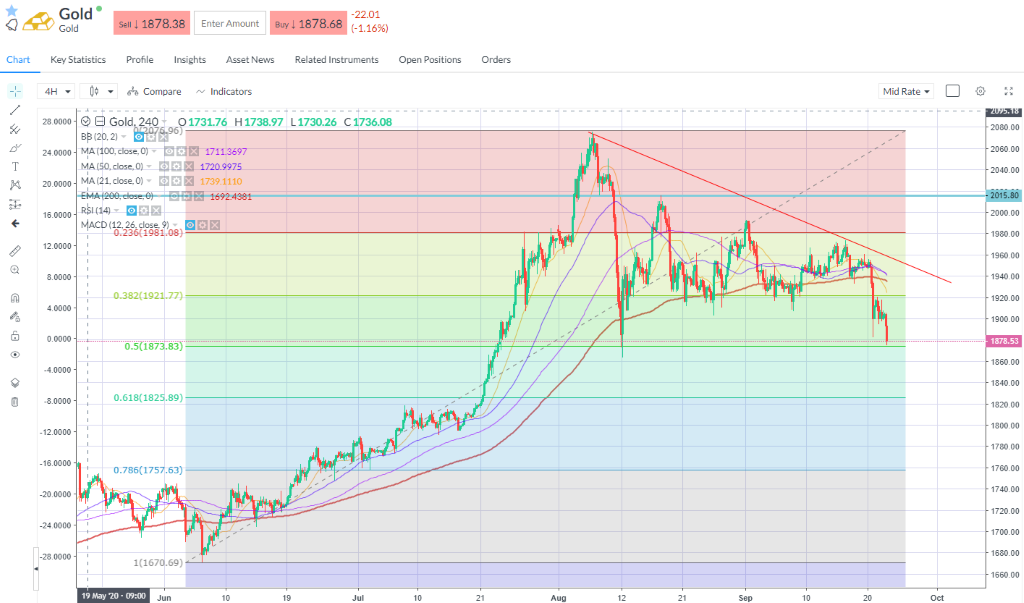 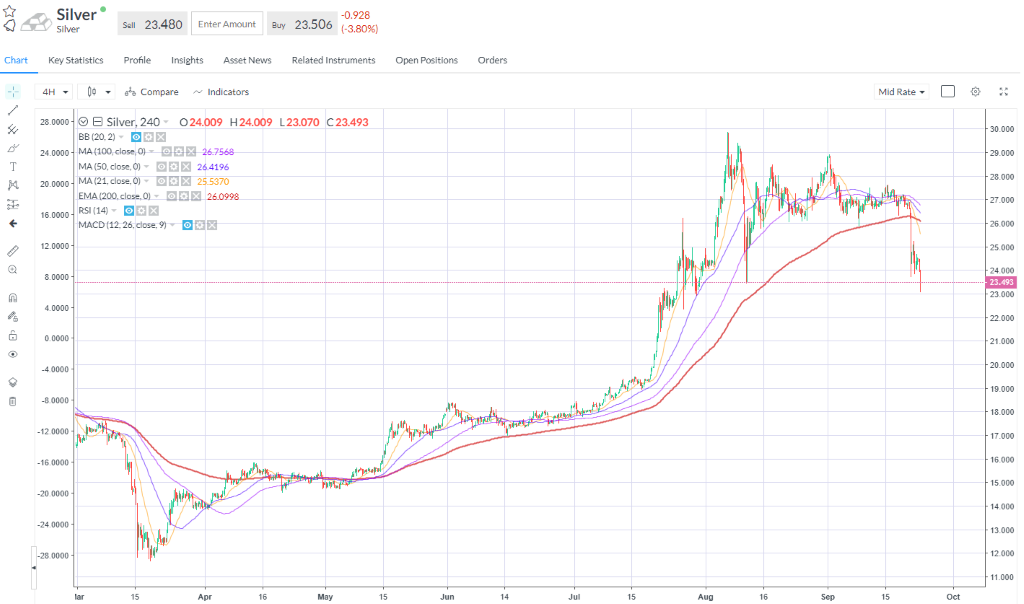