After the negative sentiment of the past couple of days there is more of a mixed sentiment on markets today. A late recovery on the oil price and the announcement of what has been perceived as a dovish set of FOMC minutes has helped to stabilise sentiment. Equities closed higher on Wall Street and this has helped a positive European open. However it will be interesting to sell how long this lasts. Sterling has rallied slightly today and in the past few days, there has tended to be more of a negative correlation between sterling and the FTSE 100. Also the safe haven assets are still performing well, with the yen still strong, gold higher and Treasury yields lower.

The FOMC meeting minutes reflected both concerns over the deterioration in the recent Non-farm Payrolls data and also over Brexit. The minutes suggested that there would need to be a data improvement and that was even before having to deal with the fallout of a Brexit. Despite yesterday’s strong improvement in the ISM Non-Manufacturing data which helped the market to regain some near term poise, the concerns over global growth are still present.

In forex trading there is a slight amount of pressure for the dollar today. The rebound in sterling is also being accompanied strangely by yen strength which would question the sustainability of the sterling rally. The euro is mildly weaker. The Aussie dollar is an underperformer after ratings agency S&P put Australia’s AAA credit rating on negative watch. Gold is mildly higher, as is the oil price.

Of the all the major equity markets, the FTSE 100 has been the biggest outperformer. The problem is that yesterday the FTSE 100 gave a significant near term bear signal. Despite the early gains today, this is still a warning sign not only for FTSE but also for the rest of the indices. A big bearish engulfing candle (although some might argue not a pure one as it has not been posted at the rally high), suggests the bears are ready and willing to take profits. Having initially seeing a positive move yesterday morning, the bears quickly hit the market hard, to close lower on the day. A bearish crossover on the Stochastics is also a concern (although not yet a confirmed sell signal). The old key breakout level at 6427 now becomes a key indicator, initially coming as the support held by a few ticks yesterday. A closing breach of 6427 would confirm a near term bearish outlook. The next supports would be 6381, the key pre-Brexit high, subsequently 6322 and then an old pivot band at 6240. The hourly chart shows a series of lower highs forming and although the early gains today have taken FTSE above initial resistance at 6472, there is a band of resistance 6520/6580 to cap the gains. Could this be a rally that is sold into again? 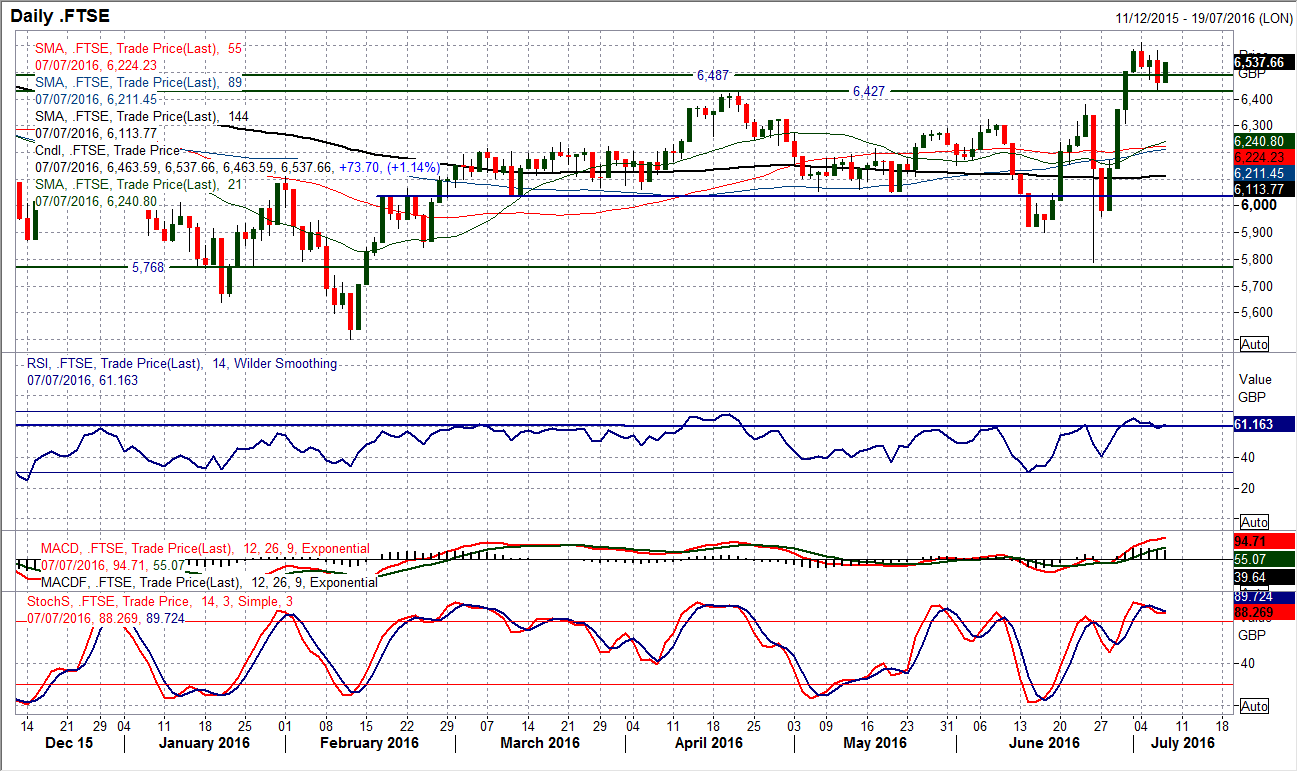 The outlook turned negative again on the euro following the bearish engulfing pattern on Tuesday. Despite the minor recovery gains yesterday this still seems to be another bounce that will be sold into. The move is back to the long term pivot of $1.1100 again, whilst there has been almost no real improvement on the momentum indicators, with the Stochastics still in decline and the RSI still struggling below 50. The hourly chart shows that the recovery has unwound into the near term resistance band $1.1095/$1.1120 which is preventing a full recovery back towards the resistance at $1.1188. I continue to see rallies being used as a chance to sell on the euro for a retest of the lows. Support comes in at $1.1022 and then $1.0969 and $1.0909. 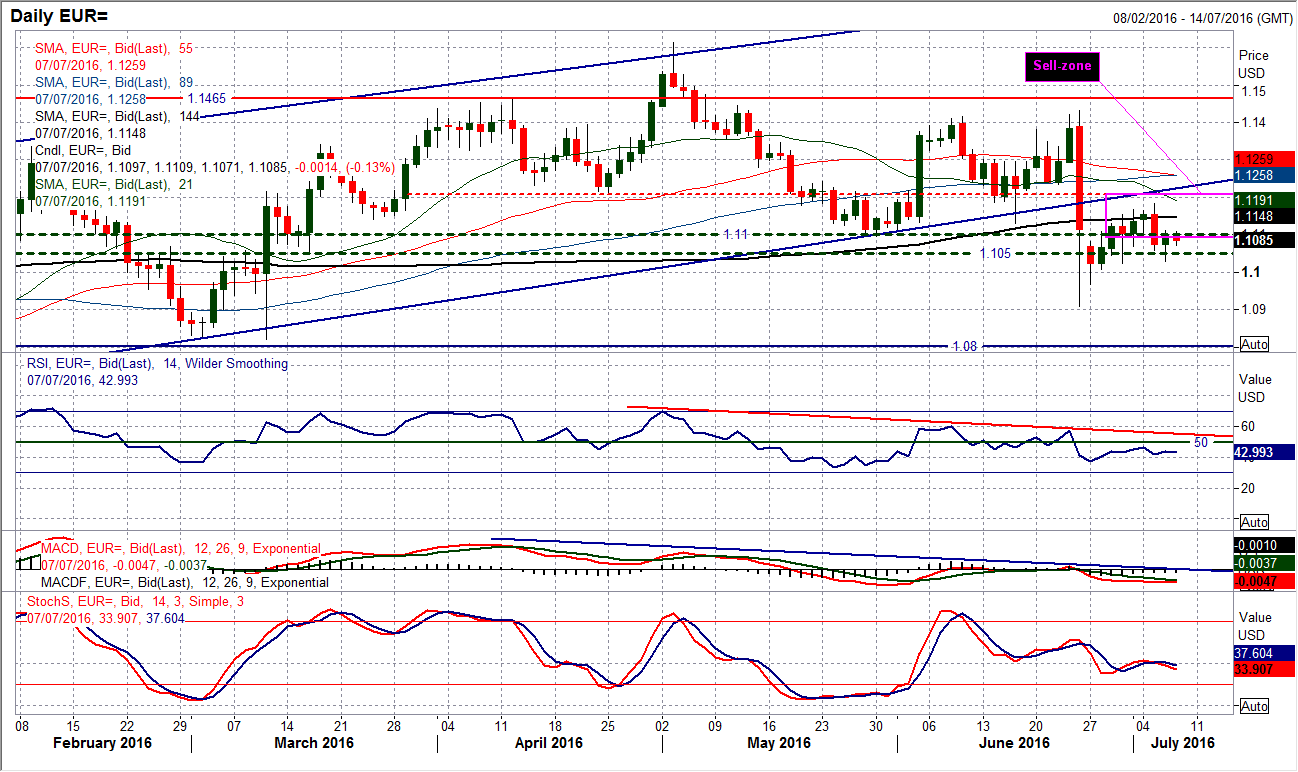 With volatility still at elevated levels, trading cable will remain difficult on a near term basis. The trend is clearly strongly lower but that does not mean that we can rule out any intermittent retracements. Yesterday’s continued weakness closed over 130 pips from the low but still this was a bearish candlestick. The momentum indicators remain very bearish and there is also further downside potential. However a minor rebound has been seen overnight and I am now looking for the next sell signal as the unwinding move creates another chance to sell. The hourly chart shows that there is a near term resistance around $1.3000, whilst the old low at $1.3118 is also an area to consider. With bearishly configured hourly momentum indicators already unwinding the next opportunity may not be long in coming. I expect a retest of the $1.2796 low before further weakness in due course. 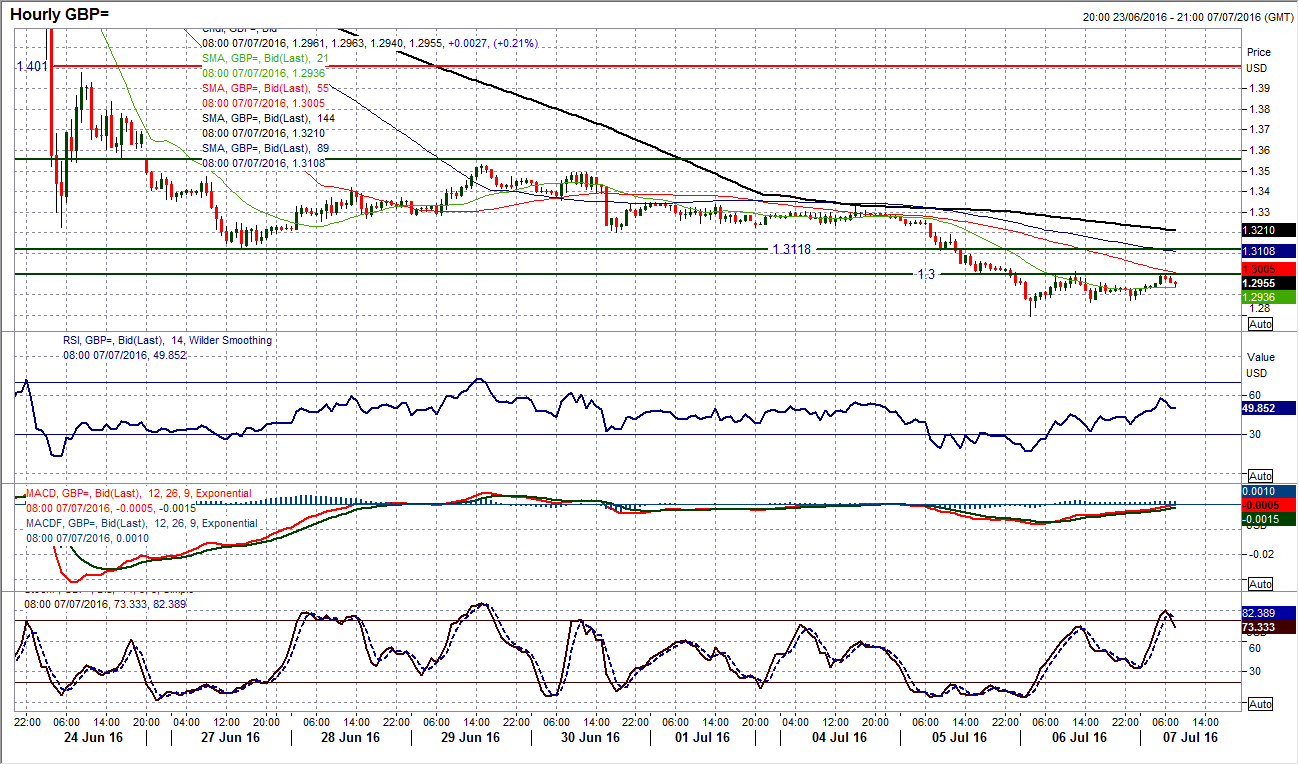 Despite a rebound of over 100 pips off the low yesterday the bears still remain in control and there is still an appetite for the yen which remains the safe haven currency of choice. The momentum indicators continue to fall away and yet still there is further downside potential. Yesterday’s intraday rebound may have rallied off the low at 100.18, but this seems to have been only minor respite and I expect this level to be retested. The hourly chart shows that the rebound failed yesterday at 101.45 which is only a few pips higher than a pivot around the old low of 101.37, before falling away again. The hourly momentum id gathering pace again to the downside and the bears remain in control. I expect pressure on 101.18 before likely further weakness below the psychological 100 and a retest of 99.08 which was the Brexit day low. 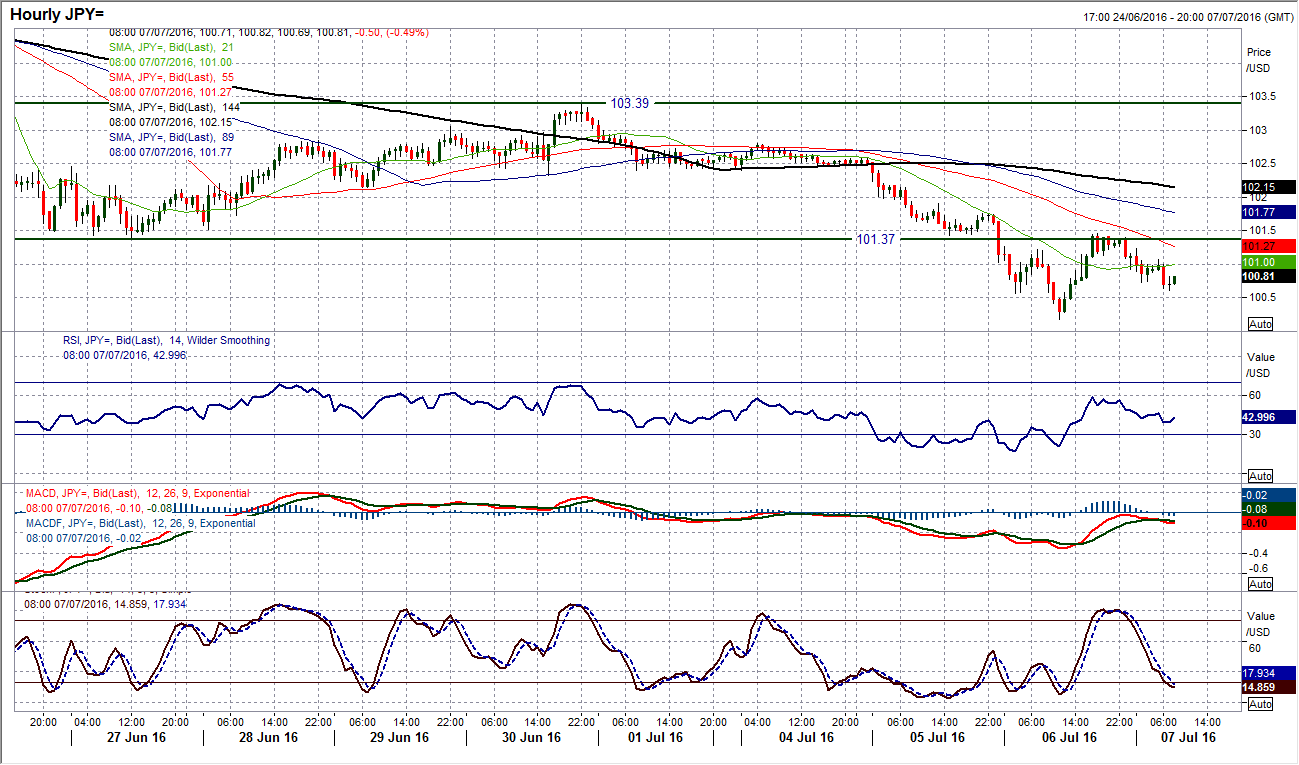 Gold has now completed six consecutive positive days in a row as the bulls have pushed higher. Breaking out above the Brexit day high of $1358 has re-opened the March 2014 high at $1391. Although yesterday’s candle closed off the highs of the day there is still a positive trend in the past week and a test of the key high remains likely. Initial resistance today comes from yesterday’s high at $1374.90 but the trend is your friend here on gold now and the momentum indicators are all pointing to further gains in a bull run that has upside potential. The hourly chart shows that the bulls will now be looking at a $20 band of support at $1.338/$1358 to use for any near term weakness. The key support comes at the breakout level around $1306. 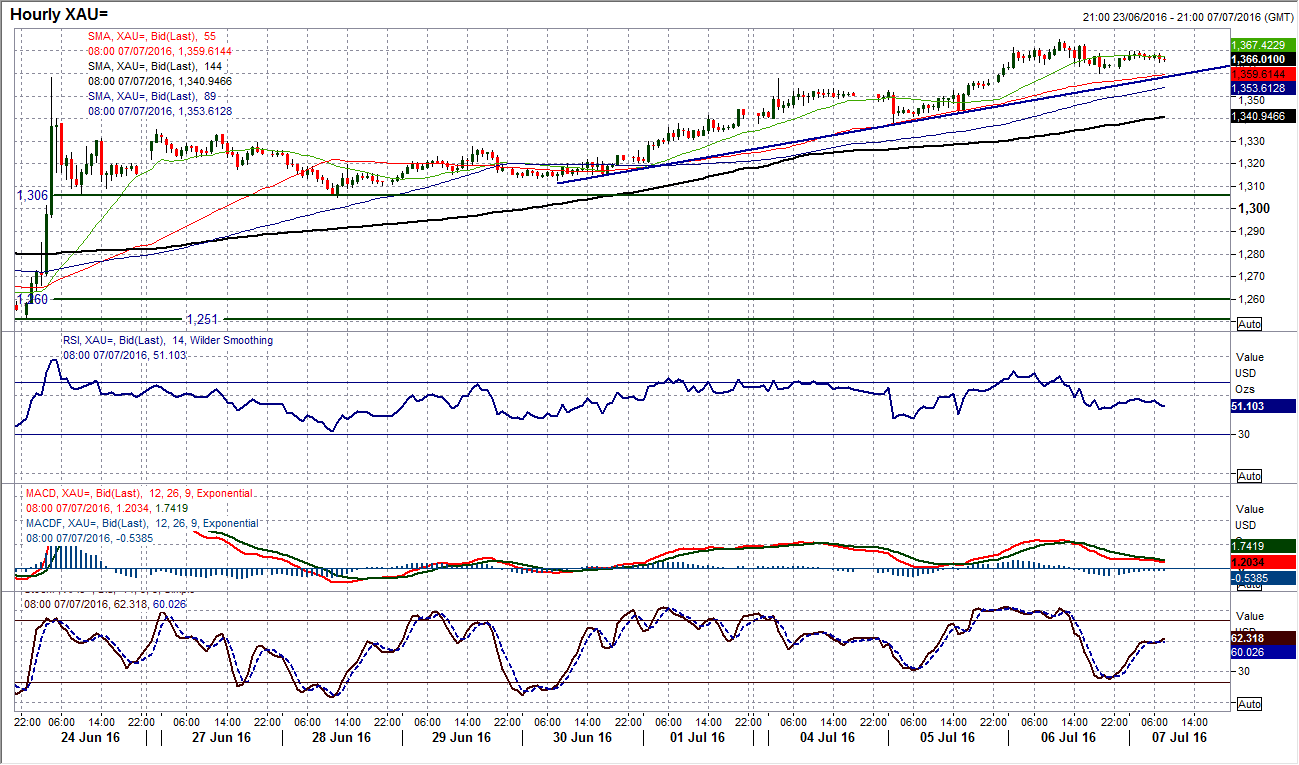 Are the bears on the brink of taking decisive control, not only on a near term but also a medium term basis? The concerns that traders have for global growth are playing out through the fall in the oil price. The support at $45.83 has been propping up the outlook for the past few weeks and once more this level was tested yesterday. This has been marking the support of what has turned into a key medium term range. However since the top at $51.67 there have been a succession of lower highs within the range and the pressure has been mounting on the support. A closing breakdown of the range would complete a top pattern that would imply around $5.80 of downside (or over 12%). Although there was another bounce off the support at $45.83 yesterday with a low forming at $45.92, the pressure is mounting. The hourly chart shows that the near term pivot around $48.00/$48.50 remains in play. The bounce needs to continue through $48.50 to allay the fears of a breakdown. 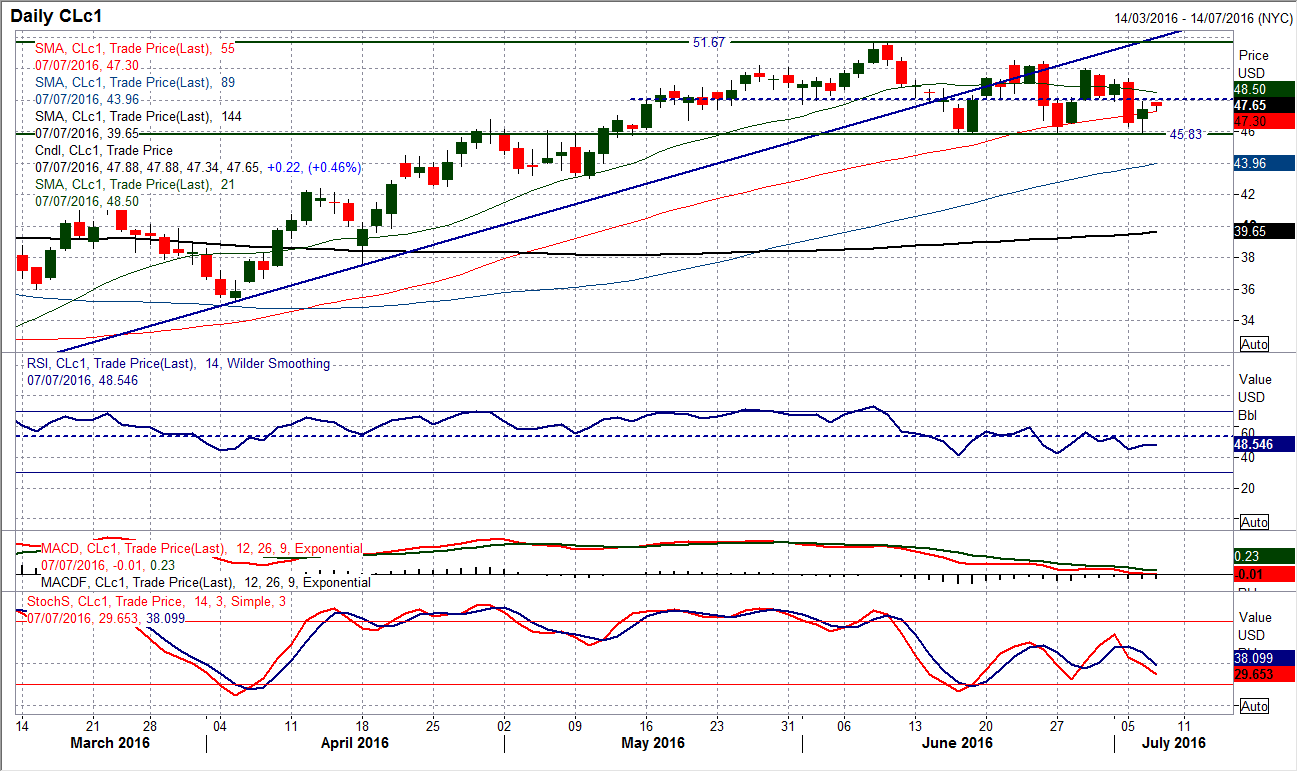 DISCLAIMER: This report does not constitute personal investment advice, nor does it take into account the individual financial circumstances or objectives of the clients who receive it. All information and research produced by Hantec Markets is intended to be general in nature; it does not constitute a recommendation or offer for the purchase or sale of any financial instrument, nor should it be construed as such. All of the views or suggestions within this report are those solely and exclusively of the author, and accurately reflect his personal views about any and all of the subject instruments and are presented to the best of the author’s knowledge. Any person relying on this report to undertake trading does so entirely at his/her own risk and Hantec Markets does not accept any liability.