European stock indices were trading lower at the time of this writing, in what has been a very bad week for equities. Understandably traders are awaiting the key monthly US jobs report in approximately half an hour from now to provide some direction. Although a stronger-than-expected set of numbers could bring forward expectations about the next Federal Reserve rate increase to as early as June, which can actually be bad news for stocks in the short-term, it would nonetheless help to reduce some concerns about the health of the world’s largest economy. Conversely, a significantly weaker set of data may put to bed talks of a rate increase in June once and for all. So we may see some wild price action in stocks initially before the markets make a decisive move later in the afternoon.

But as mentioned, equities have had a rough start to May. Unless the non-farm payrolls data or otherwise triggers a sharp turnaround in the trend, this would mark the worst week for European markets in thirteen. It has been a particularly bad week for the banking and mining sectors, with Commerzbank (DE:CBKG) and Anglo American (LON:AAL) being among the worst performing stocks in their respective sectors. Sentiment has been hurt by some really disappointing corporate earnings results and a sharp pullback in (the buck-denominated) commodity prices amid on-going oversupply concerns and a rebound in the US dollar.

The dollar rallied on the back of some mixed-bag US data in mid-week, which came as a relief after a series of weaker-than-expected macro pointers had (1) raised concerns about the health of the world’s largest economy and (2) pushed expectations about the next Federal Reserve rate increase further out. Oil prices tumbled mainly on profit-taking after speculative net long positions had risen to record levels in the prior week, for the impact of another build in US oil inventories was offset by disruptions to supply in Canada – as a result of the wildfire in Fort McMurray, the country’s oil sands hub – and Libya, where fighting between rival factions have intensified.

European investors also appear to be spooked by the impact of this year’s earlier sell-off. This is evidenced by continued outflows from the European equity exchange traded funds (ETFs). According to an article in the FT, which cites data from Markit, these ETFs have experienced outflows for the 14th straight week, shedding in the process more than $16 billion.

But preventing a bigger drop in equities is the impact of the on-going unconventional stimulatory efforts of central banks. Interest rates across the developed economies are either at record low levels, zero, or, in some cases, negative. Longer-term yields have been pressurised by programmes of asset purchases, particularly in Japan and the Eurozone.

China, earnings in focus next week

The focus in early next week may return to China, if the latest trade figures from the world’s second largest economy, due for publication on Sunday, show significant deviation from the expectations. There are no other significantly-important data for the equity markets until Friday when we will have the first quarter German and Eurozone GDP estimates, as well as retail sales and PPI from the US. Meanwhile earnings will shift down a gear but there will still be plenty to look forward to from Europe:

The German DAX index, pressurised by heavy falls in German bank shares, has now ‘filled’ one of its previously unfilled gaps at around 9770. This level also roughly corresponds with the 38.2% Fibonacci retracement of the upswing from this year’s low of 8700. If the DAX manages to find significant support at this relatively shallow retracement level then it would bode well for the bulls as it would strongly suggest that they rather than the bears are still in control. But for the bullish trend to have any chance of resuming soon, the index will need to break above Thursday’s high at around 9920, a level which also corresponds with the 50-day moving average and the backside of the support trend of the bullish channel. A potential break above it would therefore re-establish the bullish channel.

Supporting the bullish argument is the fact the index had already formed a false break reversal pattern when its stay below key support around 9340 was short-lived. So, this recent correction could just be a normal pullback in an upward-trending market. What’s more, the RSI has now moved significantly away from the “overbought” levels and is holding above 40, a level which is considered the line in the sand as far as momentum is concerned.

However, if the DAX closes Friday’s session below the 9770 support level then it would more or less confirm the breakdown of the bullish channel. In this potential scenario, a deeper correction towards the previous key support at 9340 would become a likely outcome, for this hurdle also loosely ties in with the significant 61.8% Fibonacci retracement level. Supporting the bearish argument is the fact that the long-term downward-sloping trend line is still intact while the 200-day moving average is not only above the current index levels but it is also pointing lower.

So what you are looking at is effectively a range-bound market, but with well-defined tradable levels. Overall, I still feel the bulls are in control and therefore expect to see a rebound soon. My long-term view would turn bearish only if and when the index breaks below 9340 again, although a close sub 9770 support would also make less confident about the near-term outlook. 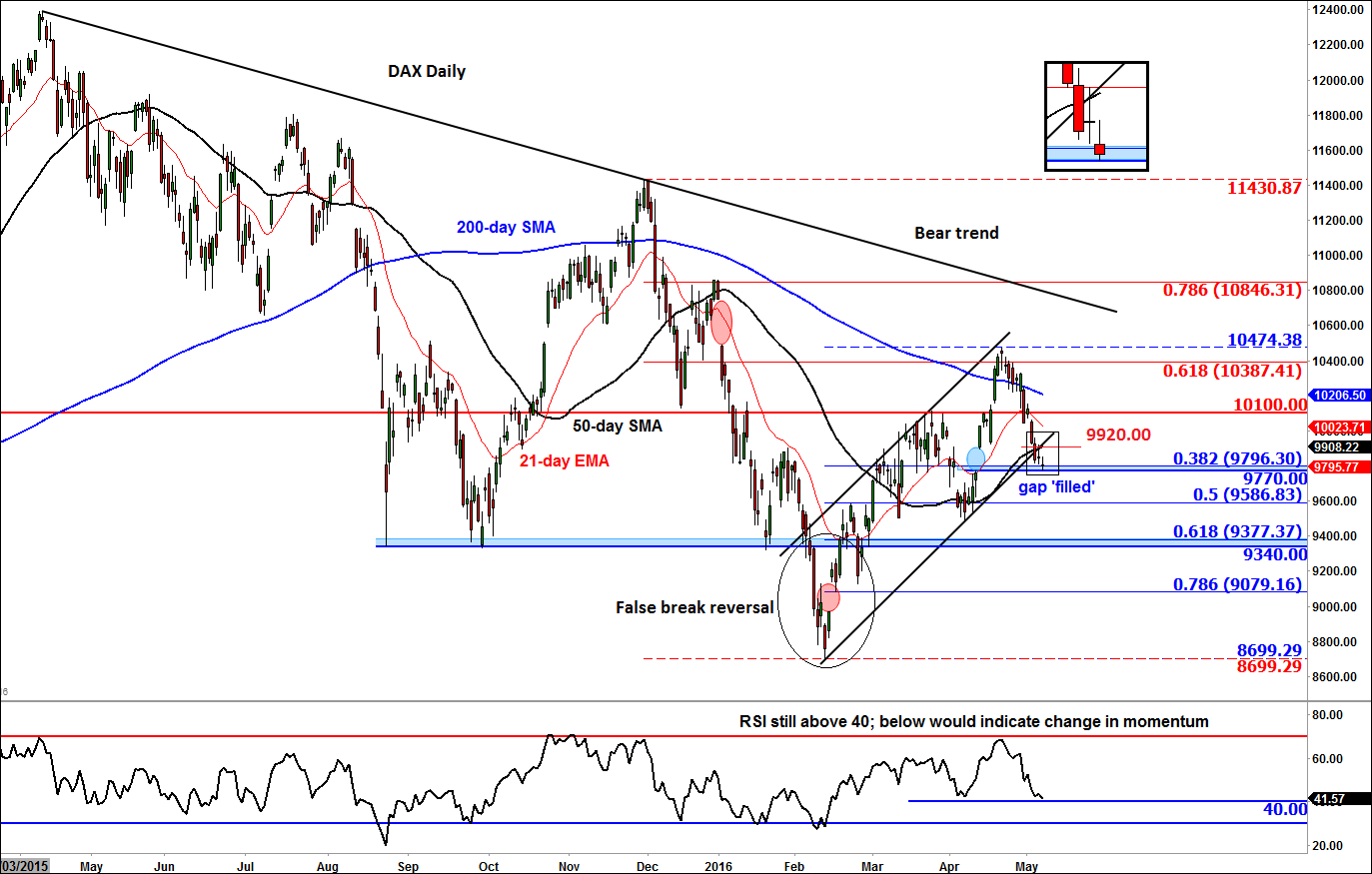 Disclaimer: The information and opinions in this report are for general information use only and are not intended as an offer or solicitation with respect to the purchase or sale of any currency or CFD contract. All opinions and information contained in this report are subject to change without notice. This report has been prepared without regard to the specific investment objectives, financial situation and needs of any particular recipient. Any references to historical price movements or levels is informational based on our analysis and we do not represent or warranty that any such movements or levels are likely to reoccur in the future. While the information contained herein was obtained from sources believed to be reliable, author does not guarantee its accuracy or completeness, nor does author assume any liability for any direct, indirect or consequential loss that may result from the reliance by any person upon any such information or opinions.

Futures, Options on Futures, Foreign Exchange and other leveraged products involves significant risk of loss and is not suitable for all investors. Losses can exceed your deposits. Increasing leverage increases risk. Spot Gold and Silver contracts are not subject to regulation under the U.S. Commodity Exchange Act. Contracts for Difference (CFDs) are not available for US residents. Before deciding to trade forex and commodity futures, you should carefully consider your financial objectives, level of experience and risk appetite. Any opinions, news, research, analyses, prices or other information contained herein is intended as general information about the subject matter covered and is provided with the understanding that FOREX.com is not rendering investment, legal, or tax advice. You should consult with appropriate counsel or other advisors on all investment, legal, or tax matters. FOREX.com is regulated by the Commodity Futures Trading Commission (CFTC) in the US, by the Financial Conduct Authority (FCA) in the UK, the Australian Securities and Investment Commission (ASIC) in Australia, and the Financial Services Agency (FSA) in Japan.