In a previous post I explained the various long-term cycles that tend to characterise commodity markets. Recall that there are two types of long term cycle. The first type sees prices rise for 15–20 year super-cycles, and then slide over the following 10–15 years. Since supply is price inelastic an increase in demand results in higher prices until eventually excess investment leads to a flood of supply and the cycle resets. This shorter of the two cycles takes 25-35 years to complete.

Meanwhile, longer-term cycles spanning 60 years are closely related to demographics This very long-term cycle is based on the idea that economic activity gradually rises and is coupled with low interest rates and rising prices. However, a turning point is reached where asset price bubbles start to form, interest rates rise and economic growth slows. The final phase of the cycle involves recession or depression, and an unwinding of the excesses of the earlier economic boom.

It would be so much easier for long-term commodity investors if prices only ever went up or down at 90° or showed nice and repeatable steps like going up and down the stairs. We could just load up at the bottom of the market, and then wait patiently until prices peaked 10-15 years later unperturbed as the market gradually and metronomically reached a peak.

In the absence of that perfect world we have to rely on something else – the cycles within the cycles.

Analysis by the IMF and published in 2012 attempted to identify the shorter-term cycles* in commodity markets. Examining the performance of 46 commodities between 1957 and 2011 revealed that the median completed cycle was about 5.5 years (54 months). This included an upswing duration of 2 years (24 months) and a downswing of 2.5 years (30 months).

However, there are significant variations in the distribution within and across commodity groups. The downswing in commodity prices tends to be longer and prone to much greater variability than the upswing. The upswing in energy prices tend to be the most reliable of the cycles – taking approximately 20 months to reach a peak. 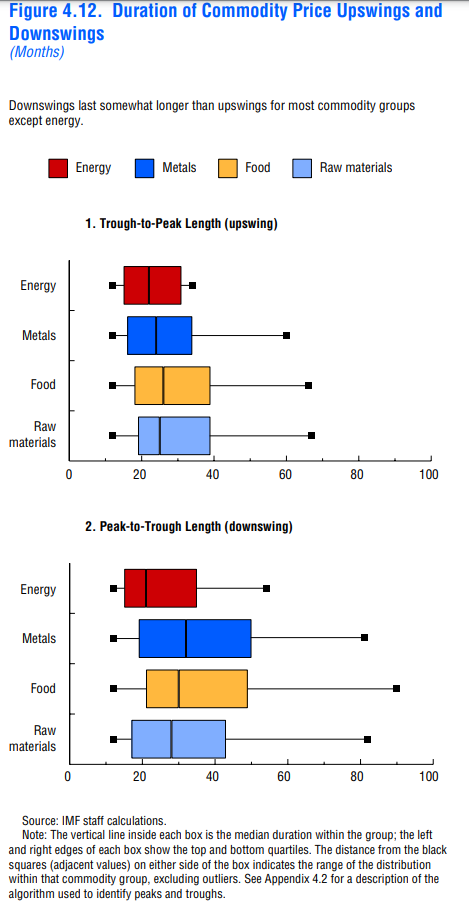 *A turning point is identified as a local maximum or minimum if the real commodity price in that month is either greater or less than the price in the two months before and the two months after. The set of resulting candidates is then required to alternate peaks and troughs. Furthermore, each phase defined by the turning points (either upswing or downswing) must be at least 12 months long, and thus a complete cycle must be at least 24 months.

Although far from full proof the cycles within the cycles provides a way for long-term commodity investors to frame fluctuations in commodity prices over periods of a few years within a longer term trend. They could also be used for investors prepared to trade in and out within that shorter term time frame to identify when a rise in prices is starting to look old and tired. Whatever the reason behind these shorter-term cycles – and long-term investors needn’t concern themselves with that – their existence goes someway to alleviate their concerns when prices inevitably move against them.