In normal times, August is a quiet month for government bond issues as many investors—as well as government officials—head for the beaches or extended holiday trips.

But these are not normal times. Right now, governments are facing huge deficits incurred by efforts to combat the fallout from COVID-19. As a result, lawmakers are planning a veritable binge of borrowing this month, led by the US Treasury, which has set a record $112 billion for its quarterly refunding this week.

This record level of issuance marks a shift toward longer maturities after the US Treasury Department financed $2.7 trillion in the April-June quarter largely through Treasury bills—shorter-term instruments that do not pay a coupon rate. 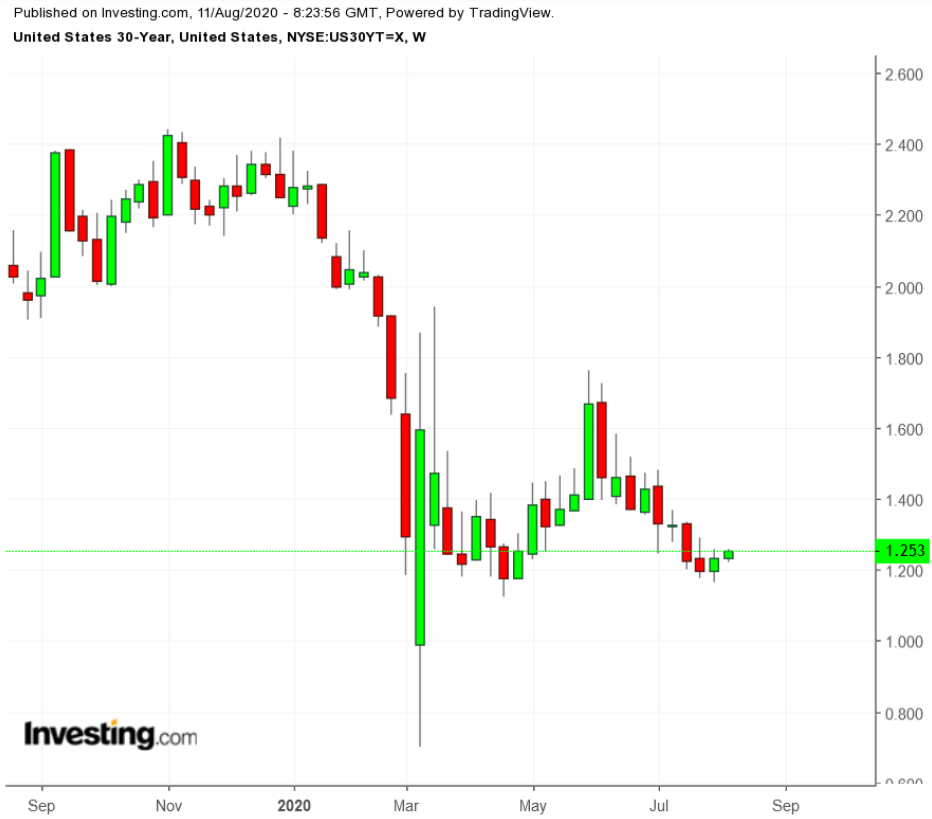 The Treasury says increasing long-term issuance is a prudent measure to manage its maturity profile. Auction sizes will increase across all coupon maturities throughout the August-October quarter, especially the 7-year, 10-year, 20-year and 30-year maturities.

For July-September, Treasury is anticipating a total of $947 billion in borrowing, depending on the size of any stimulus program passed by Congress.

Yields on the longer-term Treasuries have risen slightly in anticipation of the new issues, with the 10-year note tacking on 6 basis points by Monday from last week’s low of 0.51%.

The unexpected decline in the US unemployment rate in July, which fell to 10.2% from 11.1% in June, alleviated some of the worry about delays in economic recovery amid persistent coronavirus infections but barely contributed to the rise in yields. For some, this indicated that the 10-year bond is no longer reflecting the economy as pandemic-induced demand keeps a cap on yields.

The US is not alone in its August binge. Italy is coming out with its first bond issue in 10 years, over the Ferragosto holiday period, aiming to raise €8 billion in varied maturities. Yields on Italian government bonds are dipping below 1% after the European Union agreed to €750 billion in recovery aid, with Italy the biggest beneficiary.

Europeans in general are more religious in the observance of the August holidays, but this year Spain, France and Germany will be raising €22 billion in bond issues over the next couple of weeks.

There is some nervousness about inflation as governments pile up debt. The gold price, considered a barometer of inflation expectations, has risen nearly 40% so far this year.

Another proxy for inflation expectations, the real yield on US bonds—derived from the gap between the nominal yield on 10-year Treasuries and that on Treasury inflation-protected securities (TIPS)—has risen to 1.65% after falling to 0.95% in mid-April amid the onset of the pandemic. However, this is still below the 1.8% at the beginning of the year.

The US Federal Reserve continues to toy with its inflation target, now suggesting it will look at average inflation, allowing for some increase above its 2% target to make up for the longstanding shortfall. But this is practically the same as the symmetric target it has been talking about for some time and seems about as meaningful in the current environment as discussing how many angels can dance on the head of a pin.