Consolidation Forming On Gold, But Is It Just Near Term Respite?

Consolidation Forming On Gold, But Is It Just Near Term Respite?

Signs of life in the gold bulls as support has formed in the past 24 hours. Unsurprisingly this has come as the dollar rally has begun to consolidate. How the dollar moves in the near term will be key for gold. Given the technical breakdown in gold, we still see a risk for renewing near term downside, however, looking further out, this weakness is still likely to be the next opportunity for medium-term long positions.

With talk of a potential fiscal support package on the table for discussion between US Democrats and Republicans/the White House next week the recent sharp sell-off on risk and dollar strength has just eased in the past 24 hours. However, we still see agreement between Democrats and Republicans as being unlikely near term and the trend of dollar recovery is still in place.

Given the on-going strong negative correlation between the dollar and gold, this should mean that any near-term gold rebound could be short-lived. We would be selling into strength still, at least as the dollar rally plays out.

The decisive move above 94.00 implies continued recovery into the long term resistance band 95/96, whilst the 95.70/96.00 resistance area from June July on Dollar Index could easily be seen in the coming days/weeks. This would pull gold lower once more. 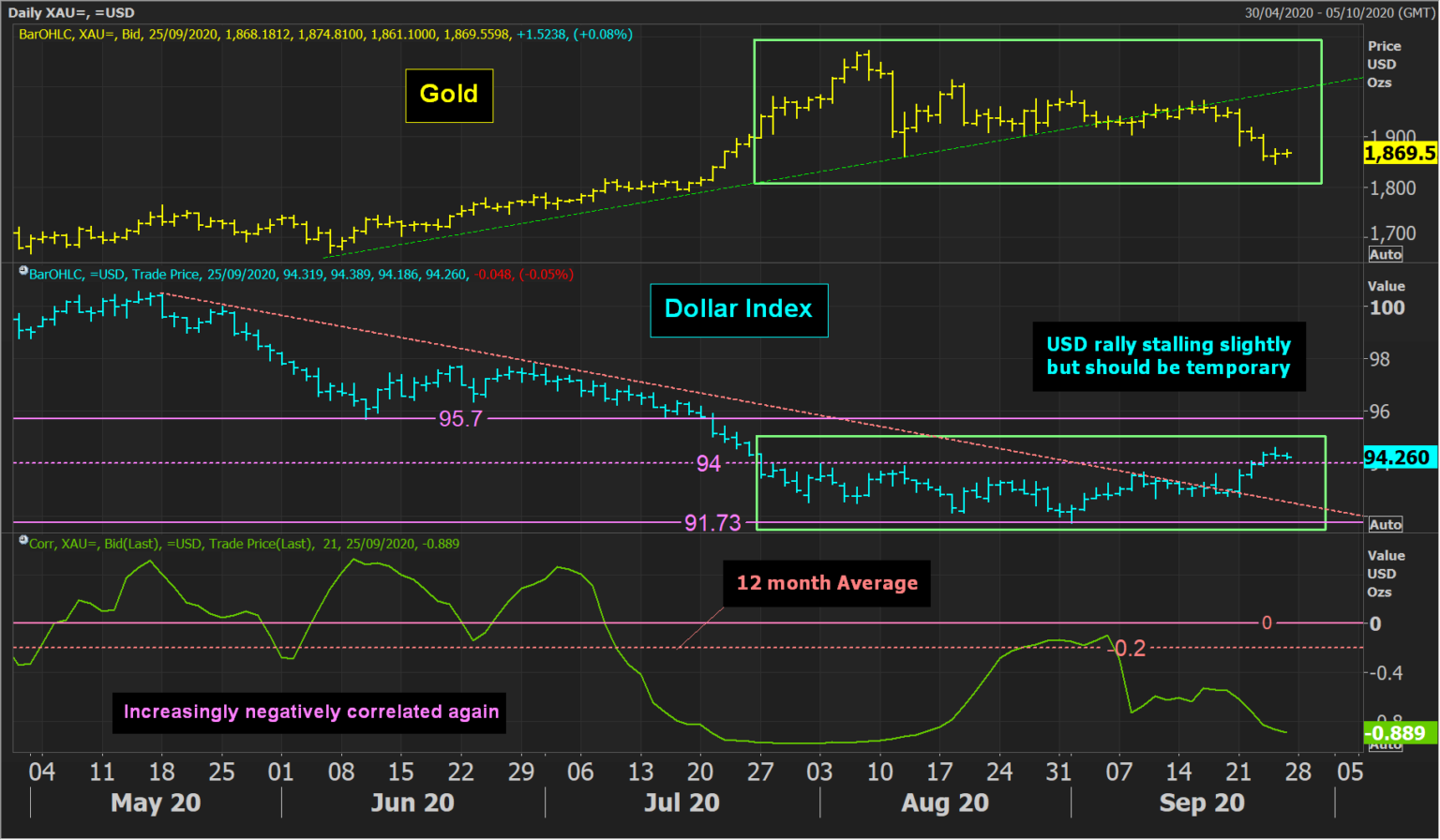 Whilst the dollar rebound should continue to weigh on gold, looking longer term, we still believe the outlook for gold will be driven by a “lower for longer” dovish Federal Reserve monetary policy outlook. The September FOMC decision shows a willingness to accept higher inflation and not hike rates until 2023. This will help to underpin gold in the months and likely quarters to come. Continued looser for longer global monetary policy will keep real yields subdued/negative and should mean that gold remains attractive. Subsequently, this is still a good environment to be buying gold into supported weakness.

The breakdown below not only $1902 but also $1863 has been a key move on gold this week. It means that the near to medium-term outlook is now corrective. Momentum indicators deteriorating to levels that reflect this new outlook suggests that little near term rallies are now a chance to sell. However, a very mild positive session yesterday has left near term support at $1847 with a move higher continuing today.

How the bulls respond to this tick back higher will be telling of their mindset now. The band of support which we talked about frequently during August into September, between $1902 (late August low) and $1926 (the 23.6% Fibonacci retracement of $1451/$2072) is now resistance, whilst the hourly chart shows initial resistance at $1882/$1894. A failed near term rally around or below here would be seen as another chance to sell for a continuation of the pullback towards the 38.2% Fib retracement at $1835.

We have drawn in a tentative six-month uptrend, formed from the recent retreat. The rising 89-day moving average (around $1860) is also flanking this trend which we now watch with interest. A close above $1926 improves but the corrective phase of lower highs and lower lows remains in place at least whilst the five-week downtrend is in place.

STRATEGY: The selling pressure has eased, but this leaves an uncertain near-term outlook. Will a bounce now be sold into? Selling into strength is our preferred near term outlook as we see further scope for a move towards $1818/$1835. However, supported weakness would be a good chance to buy for what we see as the next medium-term bull run. A close back above $1926 is needed to sustainably improve the outlook now. 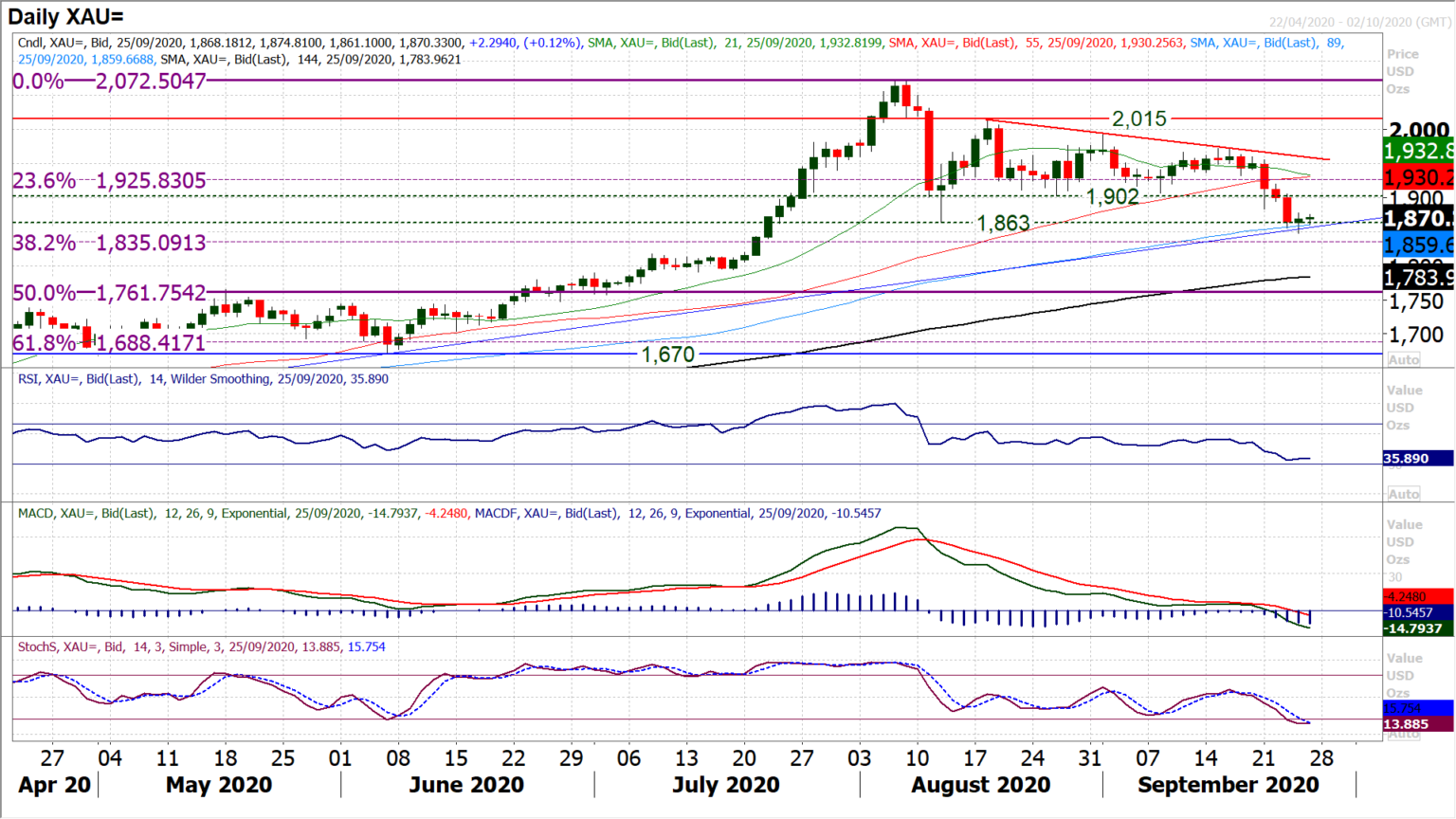 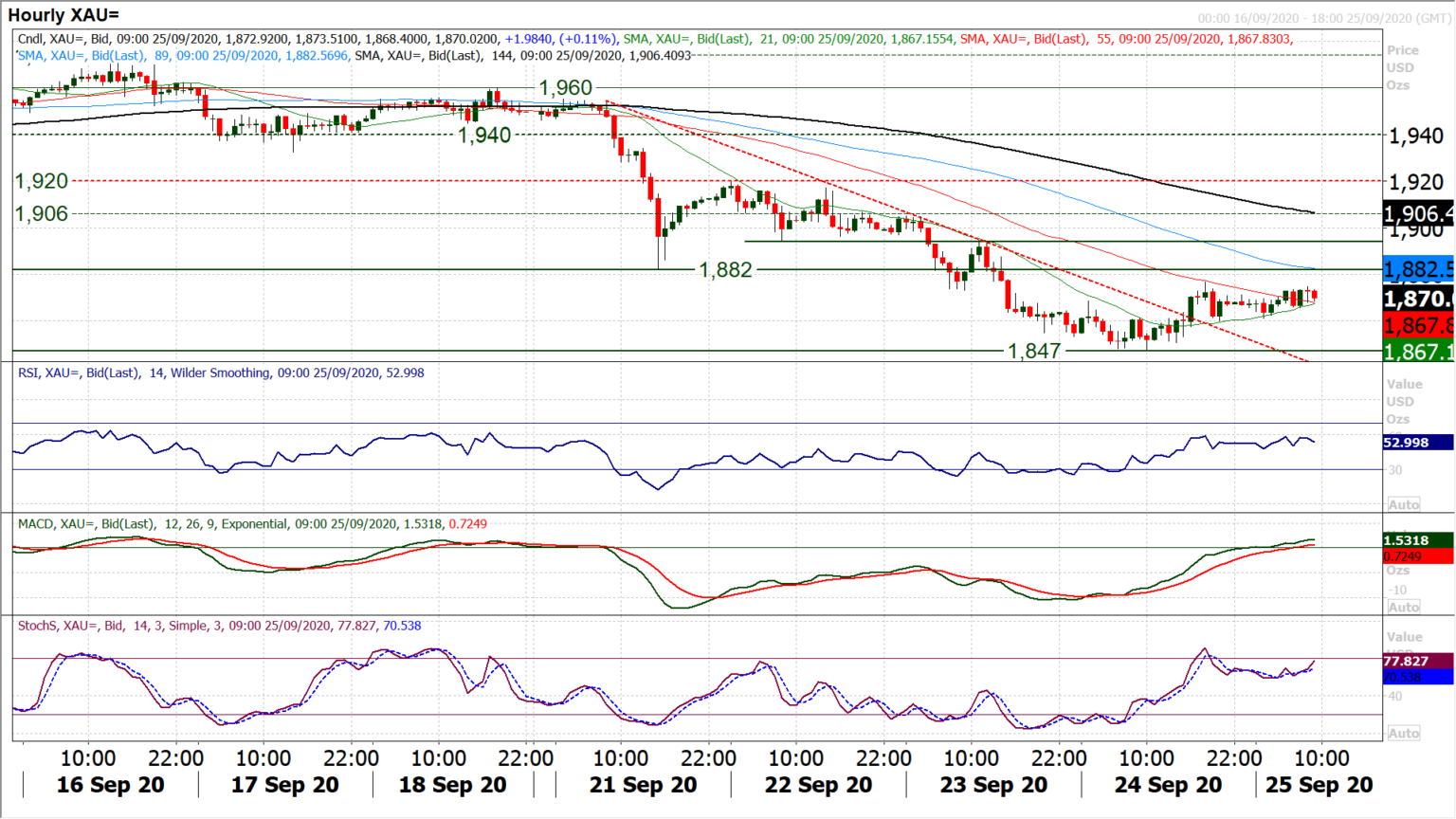