Coffee, Cocoa Don’t React Much To U.S. Reopen As Consumption Takes A Hit

Coffee, Cocoa Don’t React Much To U.S. Reopen As Consumption Takes A Hit

Starbucks (NASDAQ:SBUX) shares spiked 3.2% Tuesday after the world-famous coffee chain said it plans to reopen 85% of its U.S. coffee shops by the end of this week, with emphasis on mobile ordering, contactless pickup and cashless payments, as more cities and states ease COVID-19 lockdowns. U.S. coffee, meanwhile, rose 1.5% after three days of losses. And that isn’t the entire story. 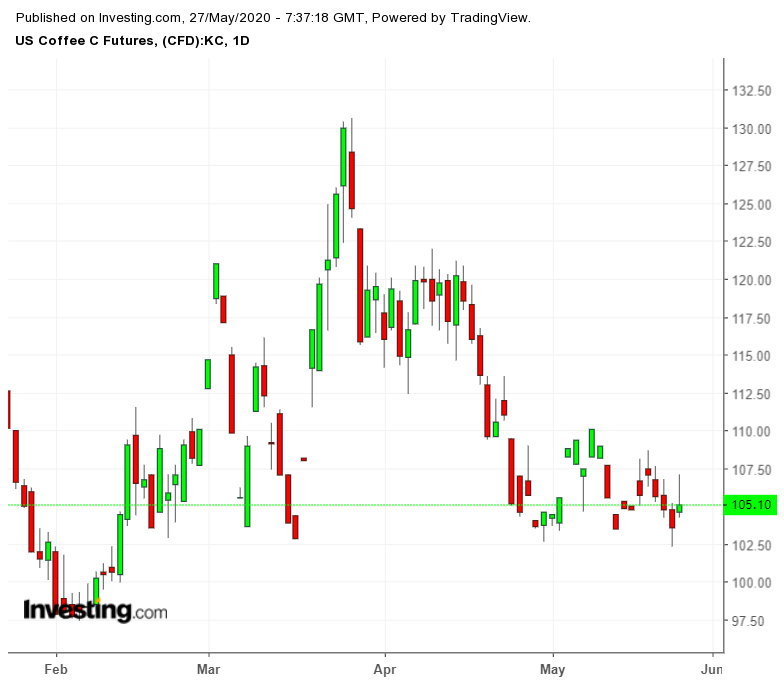 “The demand from coffee shops and other food service operations has dropped to almost nothing,” said Jack Scoville of Chicago’s Price Futures Group, who’s spent three decades at the brokerage tracking soft commodities such as coffee, cocoa, orange juice and sugar, as well as grains.

“Consumers are still drinking coffee at home, but many smaller roasters are actively trying to unload green coffee already bought,” Scoville explained. “There are only a few outlets for sales at this time.”

In Cleveland, Ohio, Malley’s Chocolates has reopened seven of its outlets after missing out on the Mother’s Day weekend, where its stores are typically packed with families picking up sweet treats for their Moms. Like Starbucks, Malley’s has ordered enforced face masks and plastic barriers to protect employees returning to work. It also plans to stagger shifts to ensure proper social distancing and store hours may change. 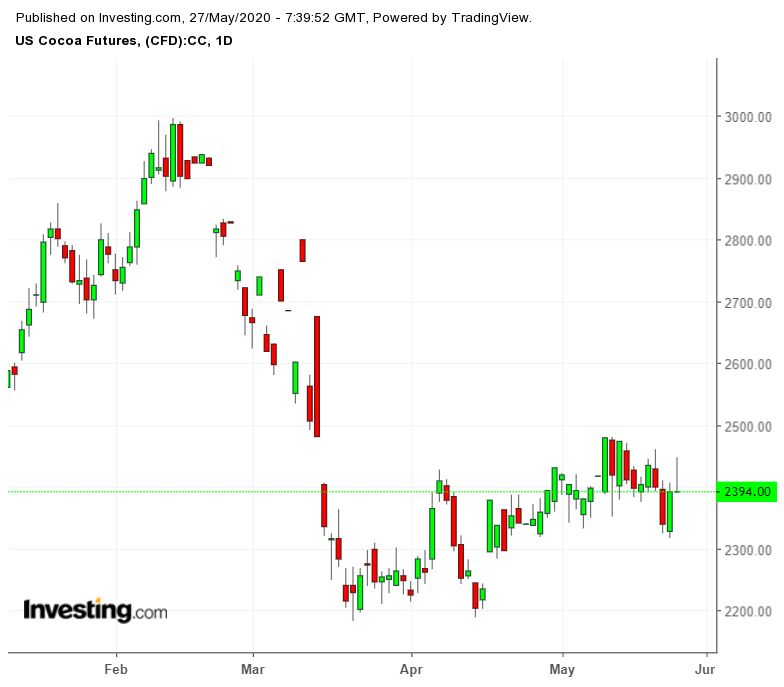 In cocoa’s case, “the virus has complicated farming and marketing efforts,” said Scoville.

“Ideas are that deliveries can be slower on any contracted cocoa and that the next crop could suffer as workers stay away.”

The coronavirus continues to have a different impact on the different raw materials in the universe of commodities.

With oil, the U.S. reopen is probably having the greatest effect, with crude prices up a whopping 240% from the lows of April 28. But it’s not just expectations of gasoline demand that’s driving oil’s rebound. From oilfields in Oklahoma to those on the Arab Gulf Coast, drillers are shutting down production at an alarming speed.

While production declines are also taking place in coffee and cocoa, demand has been slower to return to these commodities. As Scoville explains it, it isn’t that people aren’t drinking coffee or eating chocolates anymore. It’s just that they are consuming more from the coffee-maker or refrigerator at home than going to a fancy cafe or chocolate shop in town. The lack of “commercial demand” is one of the things weighing down these markets.

Starbucks temporarily shuttered about half of its 8,000 company-owned U.S. stores in late March and is among the first national chains to announce reopening plans.

The Seattle-based coffee giant says its new protocols for operation, which include greater use of its mobile app for ordering, will be a natural fit for the company. Already used by roughly 20 million customers, the app will include new options for voice ordering and curbside pickup, chief executive Kevin Johnson wrote in a letter to customers Monday.

Johnson says that more than 80% of its U.S. orders were placed “on the go” via drive-throughs or the mobile app, even before the pandemic.

Starbucks also is applying the lessons it has learned in China, where more than 98% of its stores have reopened, and ramping up investments in artificial intelligence that will help the company make “data-driven decisions” about store re-openings and other changes.

“We are putting immense emphasis on the safest and most convenient way for customers to order their favorites from Starbucks,” Johnson said.

“As we gradually come out of isolation, people will crave the connection and community that are fundamental to humanity.”

But with nearly 40 million Americans out of work and U.S. retail sales down a record 16.4% in April as the COVID-19 struck home, Starbucks and other cafes may take a while to see a full recovery in demand for their $5 and above coffees.

So where do U.S. coffee futures go from here?

At Tuesday’s settlement of $1.0508 per lb, analysts tracked by Investing.com still have a “Strong Sell” on U.S. coffee. The max downside forecast by the analysts is 99.45 cents while the top upside is seen at $1.0785.

With cocoa, analysts interviewed by Bloomberg estimated moderately lower grinds in Europe and North America by processors looking to make chocolate, ice-cream and other confections and baking products.

“Harvest is now over for the main crop in West Africa and the results so far are very good. Ideas are that demand is less than before due to the Coronavirus problems in Europe. The reports from West Africa imply a big harvest in the region.”