Chart Of The Day: With Cisco Now A Buy, Why Are Technicals Signaling A Fall?

Chart Of The Day: With Cisco Now A Buy, Why Are Technicals Signaling A Fall?

Cisco Systems, the San Jose-based networking products giant, is due to report Q4 2019 results on Wednesday, August 14, after the bell. Expectations are for $1.14 EPS and $2.55 billion in revenue. That's versus $1.76 EPS and $3.12 billion for the corresponding quarter last year.

Over the past six years, Cisco (NASDAQ:CSCO) missed just once on EPS (November 2013) and twice on earnings (November 2018 and February 2019). The company is expected to beat again on Wednesady, after it released a string of upward guidance revisions during the past quarter.

During its previous report, Cisco delivered stronger than expected earnings after the company adjusted prices and worked closely with suppliers to offset problems from the trade war with China. On top of that, the firm reduced its overall China revenue to just 3%.

Nevertheless, shares of Cisco closed up 21% YTD on Friday, barely any better than the +20.79% gains over the same time period from its benchmark index, the NASDAQ 100, where its 2.731% weighting makes it the 7th 'heaviest' of the index's 100 components.

Why has a company that's seemingly pulled out all the stops to offset trade headwinds not been able to markedly outperform its broader index? The technical charts can provide some insight on supply and demand. 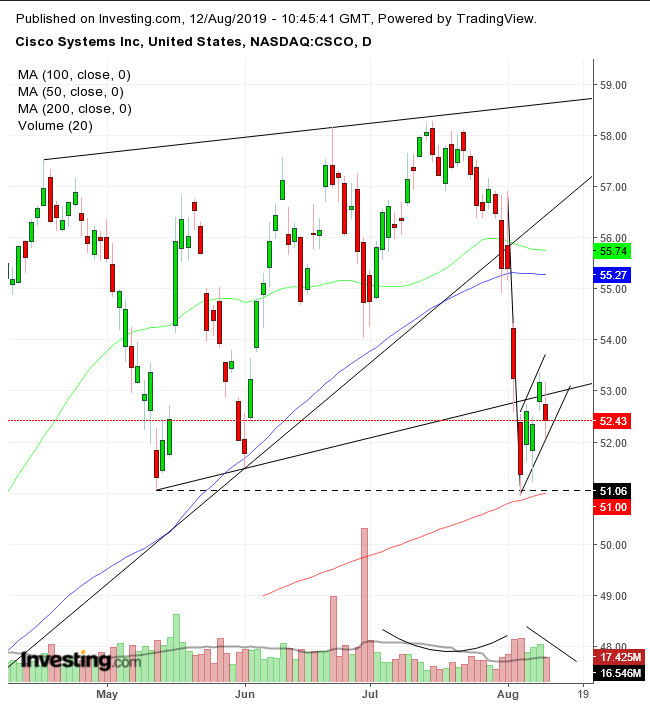 During last Monday's selloff, the stock fell below its rising channel since April, after having already fallen below its uptrend line on July 31, in place since the Christmas-Eve rout. Conversely, its index, the NASDAQ 100, found support off its uptrend line of the same period, bouncing off it and confirming the uptrend.

Moreover, after finding support by the 200 DMA, which realigned with the May lows, the price consolidated with an upward bias. After the double-digit selloff the week before, this rising congestion has all the telltale signs of a setup for another leg in the downturn.

This scenario fits with the technical pattern, a rising flag—bearish after a leg down—subsequent to breaking the support of the channel bottom, whose current resistance was confirmed with Friday’s fall, and before attempting to take on the 200 DMA for the second time. Note the volume as well: it dried up in the previous rally and spiked amid the selloff.

Volume has also been falling against the rising flag, another sign that demand is drying up. This is further evidence of a coming flag pattern completion with a downside breakout.

Why has Cisco not been able to separate away from the sector, despite its greater independence from Chinese revenue? Though we don’t know for sure, an assumption can be made that the company is now hampered by residual negative sentiment, for which Cisco is not at fault.

Or maybe this price action is being driven by informed money, people who may be close to the inner circle and have picked up on negative rumors. Meanwhile, ironically, of 30 analysts, 21 now have a buy rating on the stock, with zero providing a “sell.”

If there's a downside breakout of the flag, however, we'll be the first to call a sell signal.

Conservative traders might wait for weekly falling peaks and troughs to establish a long-term downtrend.

Moderate traders could enter a short position after the price falls below the 200 DMA and finds resistance upon a return move.