Chart Of The Day: How To Trade Canada's S&P/TSX Momentum Reversal

Chart Of The Day: How To Trade Canada's S&P/TSX Momentum Reversal

Saudi Arabia has been selling off Canadian financial assets since Tuesday, amid an escalating diplomatic spat between the two countries. The Saudi Arabia central bank and state pension funds instructed overseas asset managers to dispose of Canadian equities, bonds and cash holdings “no matter the cost”, the Financial Times reported Wednesday.

It comes as no surprise, therefore, that Canada’s S&P/TSX Composite could close the week at the lowest level in more than a month. But how far will the index's bearish reversal in momentum go? 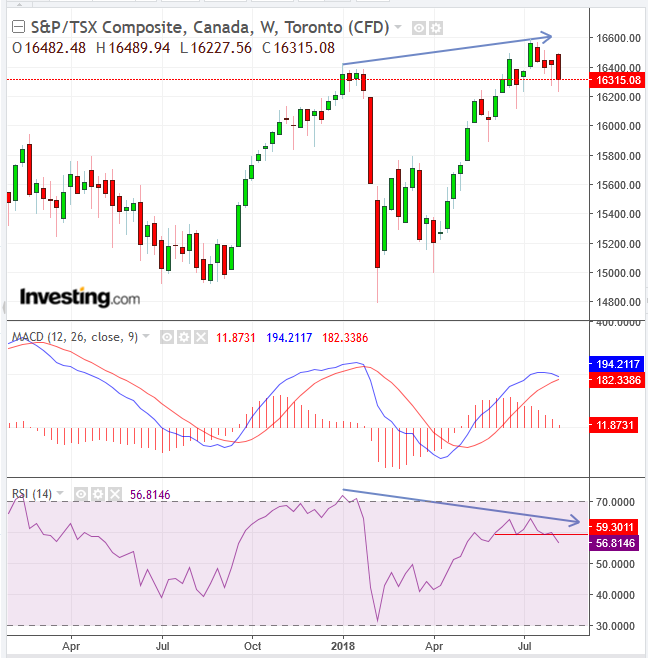 The RSI completed a double-top reversal, as momentum is set to plunge, suggesting prices would follow lower. The reversal pattern in momentum is the culmination of a negative divergence between momentum and the price, as the RSI peaked below its January momentum, while prices posted a higher peak. Momentum’s failure to support the rise in prices is a bearish signal, as prices would be hard-pressed to keep climbing without momentum’s support.

Finally, the MACD’s long MA (blue) is falling and about to cross below its short MA (red), triggering a sell signal, as current prices are falling relative to previous ones.

Conservative traders should avoid this trade, as the trend is still up.

Moderate traders may risk a short position, if prices rebound but fail to peak higher than 16,600.

Aggressive traders may enter a position, once it suits their equity management plan.