Having given a reaction to the prospect of the Fed cutting interest rates at the July meeting, a period of consolidation has overcome the major markets. The euro is quiet in the middle of a five month trading range, whilst gold is finally showing signs of settling down after recent volatility, and even the upside breakout on Wall Street is losing steam. Markets are looking for the next catalyst. Today, the focus will be on US Retail Sales, to see if the US consumer can impact on the Fed’s outlook in any way. Fed chair Jerome Powell is also speaking, and in front of such a crucial July FOMC meeting, any Fed speak will be market moving. However, this morning will also be important for sterling traders, with key wage growth data hopefully able to briefly take attention away from the politics of Brexit. Also the German ZEW sentiment gauges give a key insight into the path of the German economy, which is a drive behind the Eurozone and by extension the euro. In a period of quiet on markets, the reaction of bond yields to these data points becomes increasingly important. Yield differentials take a more prominent role in direction of currency pairs. So watching Treasury yields could be the source of how to find direction right now.

Wall Street closed an incredibly tight session, marginally higher with the S&P 500 half a tick higher at 3014. US futures are still steady today +0.1% higher, but Asian markets have been cautious overnight, with the Nikkei -0.7% and Shanghai Composite -0.3%. European markets are also circumspect this morning, with FTSE futures -0.2% and DAX futures +0.1% early today. In forex, there is a mixed outlook on USD, with AUD a shade lower on a dovish lean from the RBA minutes, whilst NZD continues to recover well. In commodities, the dollar consolidation and lack of intent on markets means that gold is all but flat, whilst oil is holding yesterday’s renewed weakness as the Gulf of Mexico platforms came back into production.

Traders should also keep an eye out for the comments of Fed speakers ahead of a crucial FOMC meeting at the end of the month. Today there is Fed chair Powell (centrist) at 1800BST, whose speeches always garner attention, whilst the FOMC’s Charles Evans (voter in 2019, leans slightly dovish) is also speaking at 2030BST.

Chart of the Day – EUR/AUD

The euro may have been benefitting from the weaker US dollar in recent days, but the Aussie is a real outperform amongst the majors. The outlook for Euro/Aussie is subsequently deteriorating. With a run of negative candles, there has been a breach of the support at 1.0620 which confirms the breach of an old pivot at 1.6070 but also now completes the formation of a top pattern. Over the past two months the market has been rolling over, but has now formed a lower high at 1.6230 and with the lower low, forms a head and shoulders top pattern. Decisively being confirmed on momentum indicators adds conviction to this market topping out. The lower high came as the RSI failed at 50 and is now correctively configured below 40, along with MACD lines falling below neutral. This suggests intraday strength is a chance to sell. The top implies a retreat towards 1.5700, whilst initial support is at 1.5900 and 1.5800. 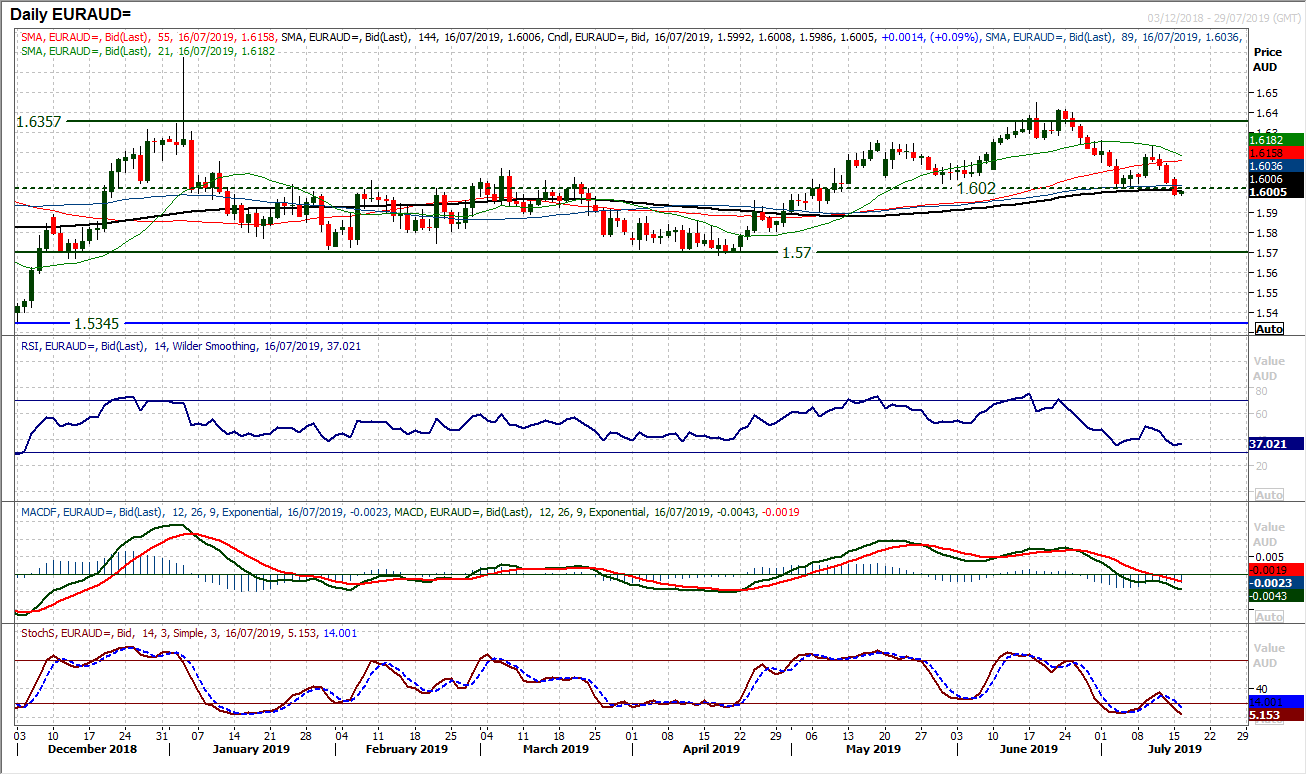 The rally off last week’s low at $1.1192 has just begun to stall slightly. The fact that this is coming around the old pivot at $1.1265 is interesting. This pivot is effectively bang in the middle of the $1.1110/$1.1410 five month trading band. It also comes with the momentum indicators increasingly neutrally configured. Yesterday’s rally again failed at $1.1285 and a consolidation has set in. The hourly chart reflects this. The hourly RSI is oscillating calmly between 40/60, whilst hourly MACD lines hover around neutral. The initial support at $1.1235 means this is now a 50 pip mini range too and we look for closing breaks either above $1.1285 or below $1.1235. Above $1.1285 opens $1.1310 and more considerable resistance at $1.1350. This is a market in need of a catalyst, so perhaps US Retail Sales this afternoon will be key. 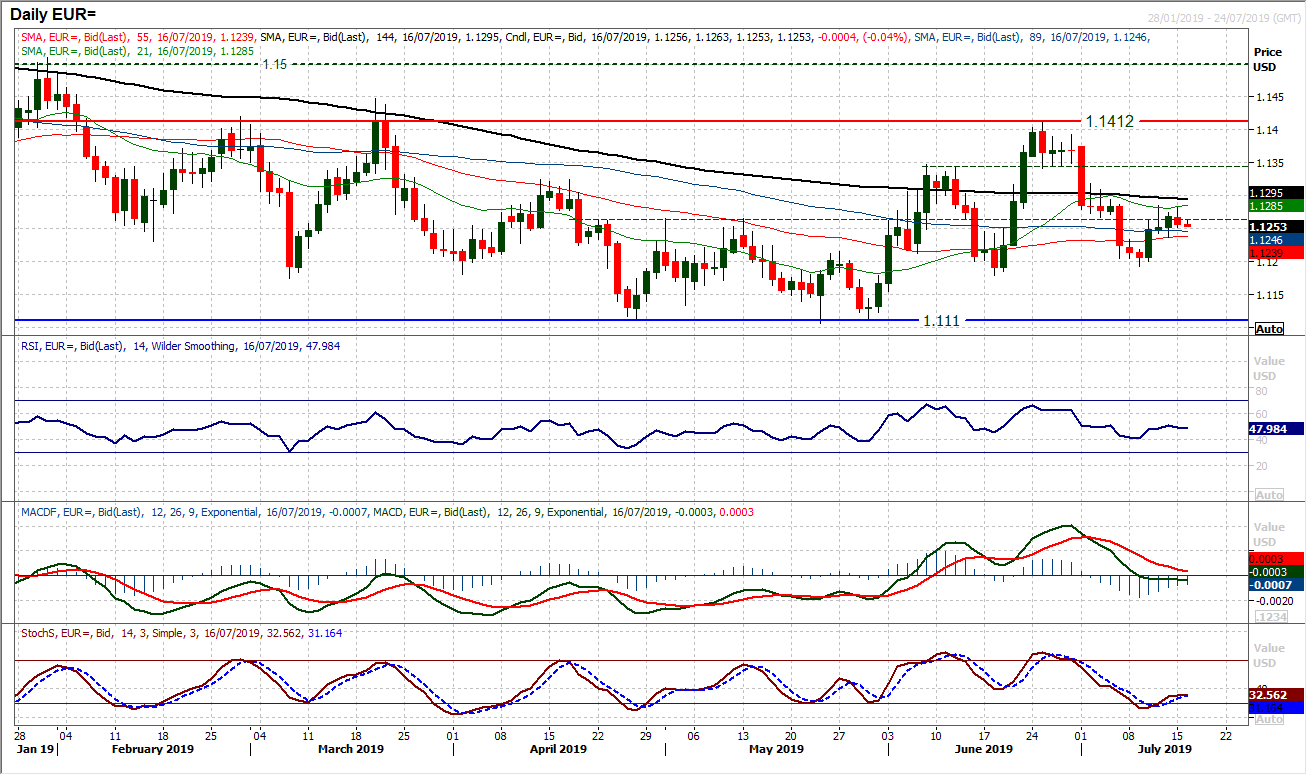 We have been anticipating that the rally on Cable would be short lived, and already it seems as though the downside pressure could be ready to renew. The dollar correction across major markets has dissipated (at least for now) and so the underperformance of sterling has taken hold of Cable again. Yesterday’s 60 pip negative close for Cable (when the dollar closed around flat elsewhere on the major pairs) is a reflection of renewed bear control. The old support at $1.2505 is being tested once more. A close back below would re-open $1.2435. The resistance that has been left overhead at $1.2580 now runs the risk of being a lower high. Given the deterioration on the momentum indicators on the hourly chart, there is a loss of recovery momentum and a market back on the brink of becoming decisively negative again. 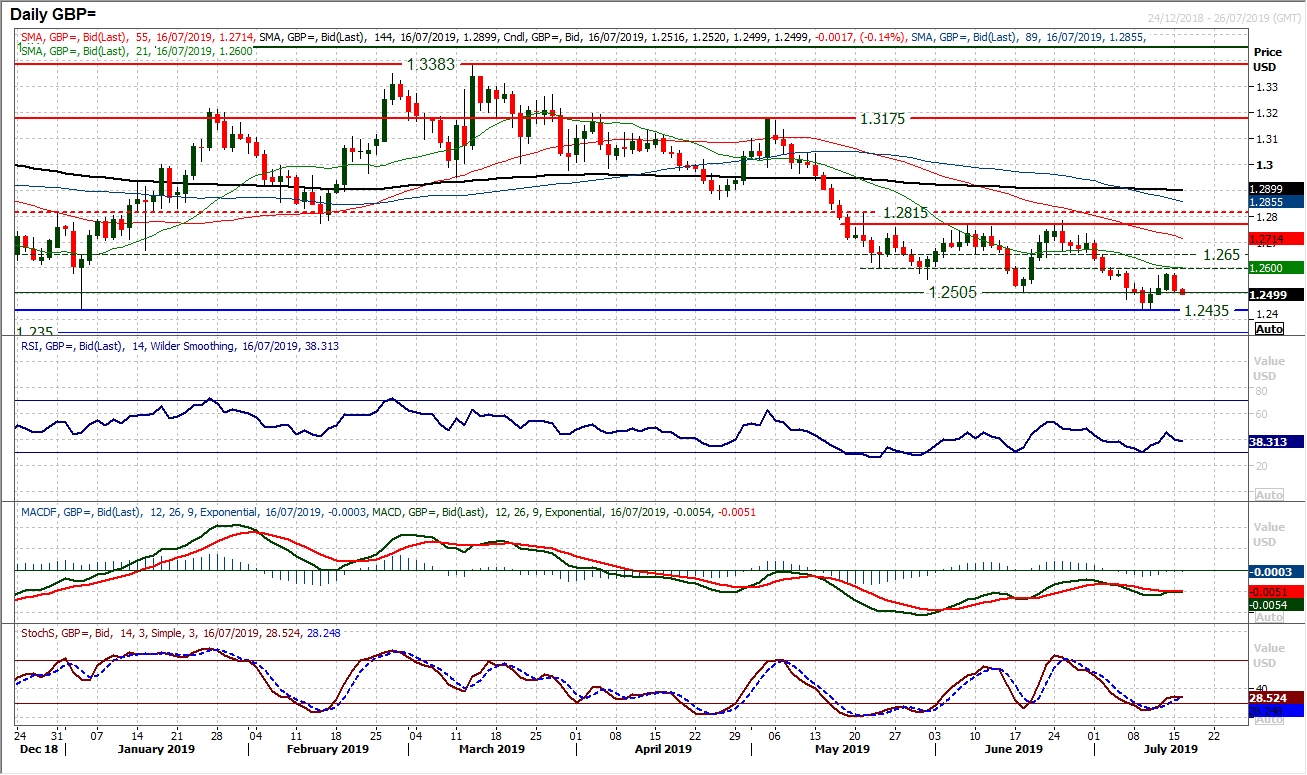 The dollar bulls are struggling against the backdrop of stunted Treasury yields and strong correlation to yield differentials. This is weighing on Dollar/Yen, whilst the technical indicators are again moving into reverse. Near term strength is still seen as a chance to sell on USD/JPY. However, for now, there is still fight in the bulls which are preventing the higher low at 107.50 from being broken. There is a near term negative bias formed over the past week, with a string of candles with bull failures and a broken uptrend. The Stochastics are falling but for now the RSI and MACD lines are not decisively negative. This is why we are not all out negative, yet. The initial support at 107.80 is now a gauge. 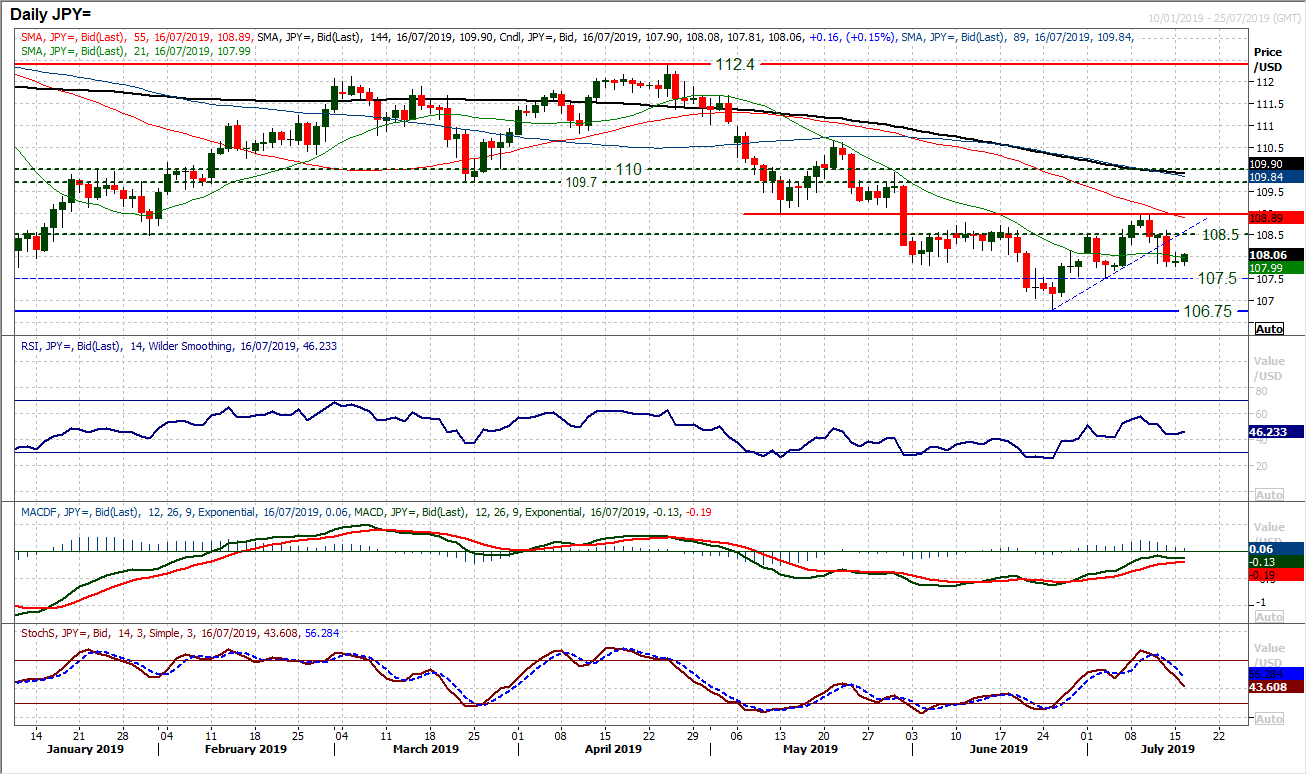 Another session lacking real direction as the consolidation on gold continues to build. Alternating bull and bear candlesticks over the past four sessions show how indecisive the market is right now. However, there is a basis of support above $1400 (a psychological but also near term pivot level), whilst the 23.6% Fibonacci retracement of $1269/$1439 is at $1399 and adds to the underlying support for now. This level $1399/$1400 is subsequently something of a benchmark gauge for control of the market. Consolidation is helping momentum indicators to unwind and ultimately should help to renew the prospect of upside potential. On the hourly chart, momentum indicators are increasingly neutralised, with support bases initially around $1410 and resistance early today at $1419. The bulls may be holding the support but also are failing under the $1426 high from last week. Perhaps US Retail Sales today will give some direction. 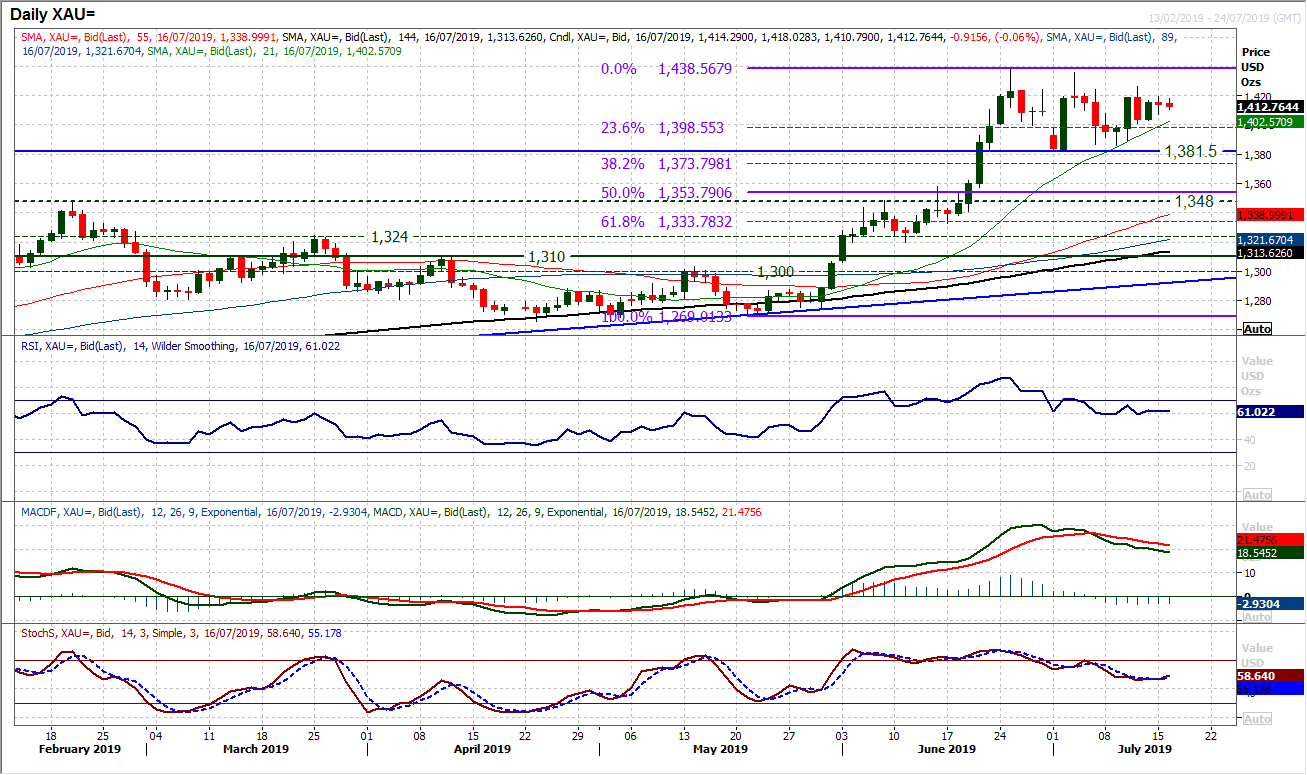 Consolidation has just turned into a negative drift in the past 24 hours. It means that the support that had been holding around the m $59.60 (50% Fibonacci retracement) is breaching. The recovery uptrend of the past four weeks (which comes in at $59.10) is now being tested. A closing breach of this trend would be a disappointment for the recovery and if it comes soon with a break below the 50% Fib level, then technically it would re-open the $58.00 pivot again. Furthermore, it would strengthen the resistance at $60.95T. However, it is important to say that the momentum indicators are still maintaining their improvement and there are no immediate corrective signals. The reaction at this trendline could be key. 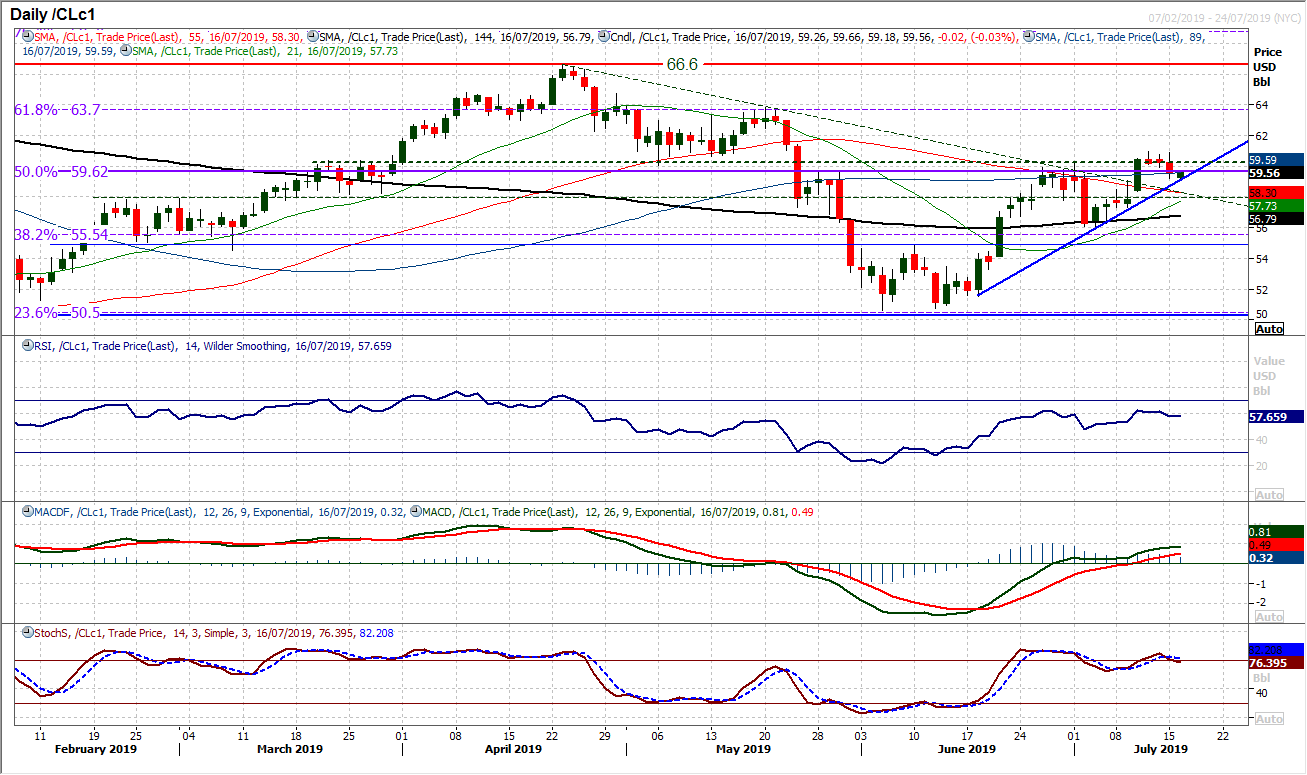 After such a strong session on Friday, almost the complete opposite to kick off the new week. The Dow has just posted the smallest daily candlestick range of the year. What is effectively a doji candle with just 70 ticks of daily range (the current Average True Range is 180 ticks). The bulls are suddenly very tentative. It means that the response today could be very important. We discussed previously about how stretched the RSI was becoming, it is currently a shade under 75 which is historically very high. The prospect of a near term technical correction (to unwind momentum) is growing. The recent uptrend comes in at 26,820 today, whilst the previous breakout support is at 26,965. There is also a gap to be filled from Friday’s open at 27,088. Given the strong technical configuration, corrections remain a chance to buy, but also the market suddenly looks ripe for profit taking. 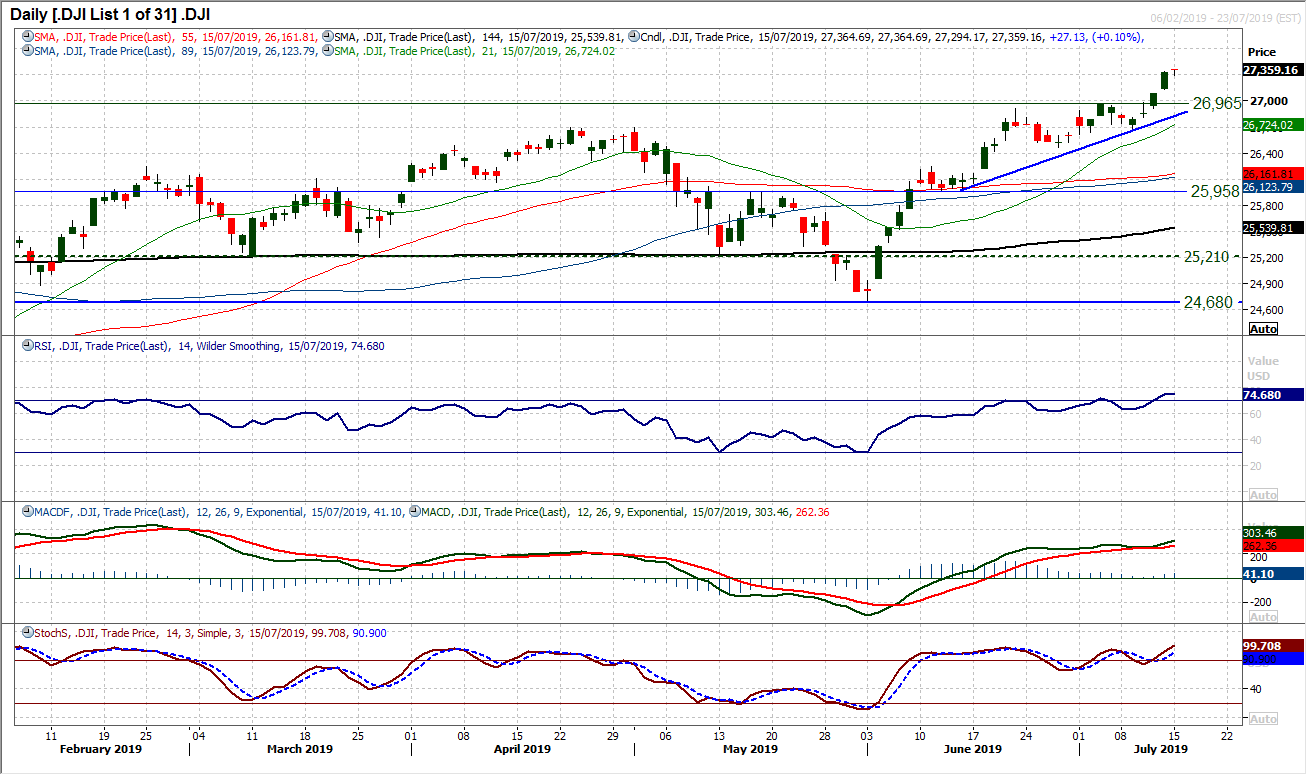