After closing lower in each of the past two days, when the 1.10 handle proved too strong a hurdle for the bulls, the EUR/USD burst higher at the European open this morning and threatened to finally break higher. However, the momentum faded somewhat, with the bulls reluctant to go out all guns blazing amid ongoing concerns over a no-deal Brexit, as well as soft data in the Eurozone.

But we continue to expect the shared currency may be able to advance and finally break that 1.10 hurdle at the umpteenth time of asking. This is because the yield spread between German and US bonds has widened, as we reported previously. The yield spread has widened thanks mainly to the recent soft patch in US data and the Fed becoming increasingly dovish, rather than a rise for German yields.

With most major central banks cutting interest rates and in the case of the ECB re-starting QE, the pressure has been growing on the Fed to become more aggressive in its rate cuts — not least by President Donald Trump. Well, at a speech yesterday, the Fed’s Chair Jay Powell said the central bank will resume short-term US Treasury bond purchases soon in order to expand its balance sheet. It hopes to prevent a repeat of the recent disruption in repo markets.

Some were quick to call it QE4, but Powell denied it was another round of QE programme, because it was intended, he said, to facilitate short-term lending rather than to stimulate the economy. Nevertheless, US bond yields fell on the back of the announcement, although they have bounced back a little today as stock markets rose on US-China trade deal hopes.

From a technical point of view, the EUR/USD still resides within its bearish channel, is holding well below the 200-day average and key short-term resistance at 1.1000. So, the bears are still clinging on. But a close above the 1.10 will probably end the near term bearish bias. In that case we could see a nice short squeeze towards and possibly beyond the recent high at 1.1110. However, all bets are off if price breaks and holds below short-term support at 1.0945. 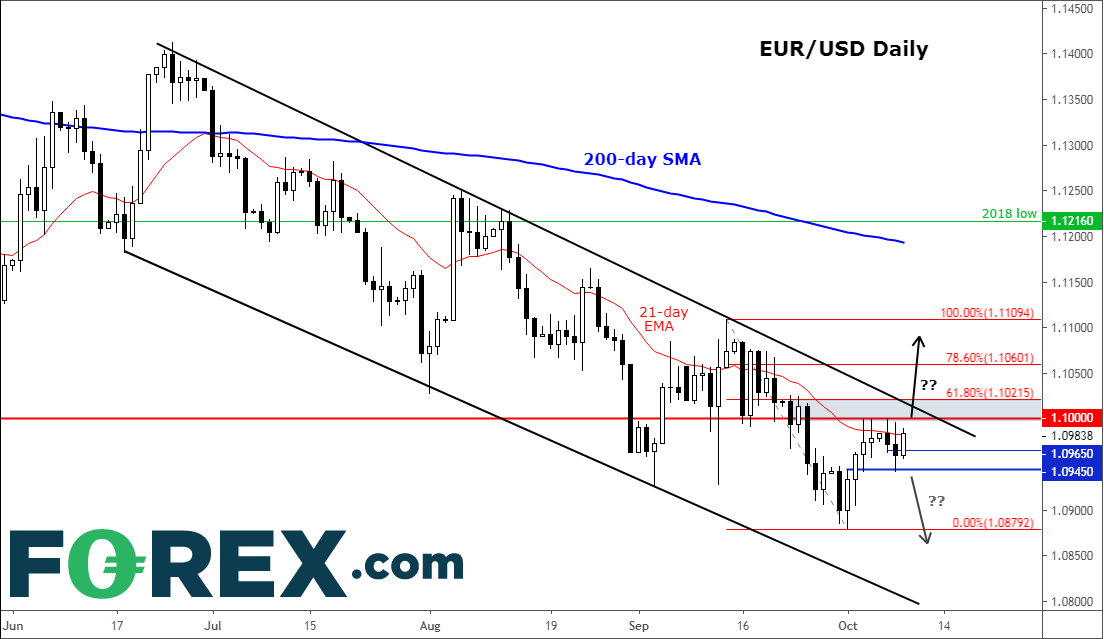