The British parliament’s first weekend sitting in 37 years saw the Letwin amendment triggered, yet reports that the government may have the votes to secure a deal saw GBP evade weekend gaps. 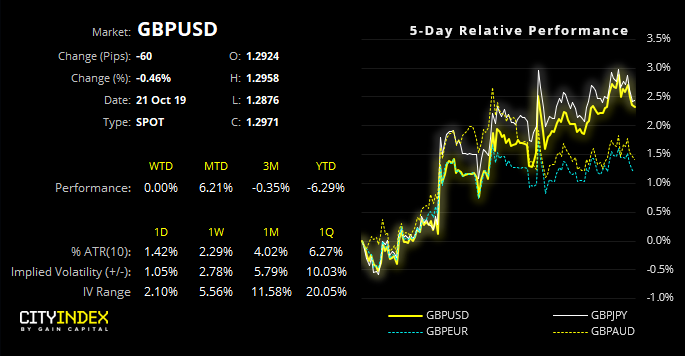 This weekend the British Parliament held its first weekend sitting in 37 years to debate Boris Johnson’s Brexit deal. Cobbled together at the last minute, the new deal is essentially Theresa May’s Brexit deal with a revised protocol on Ireland and Northern Ireland and a few tweaks to the political declaration regarding the future EU-UK relationship. Critically, the contentious backstop has been replaced. The new proposal avoids a hard border across Ireland by keeping Northern Ireland aligned to EU single market rules and regulations while actually remaining part of the UK’s customs territory for at least four years. At the end of this period, the Northern Irish Assembly will vote on whether to remain aligned with the EU and the deal could be rolled over for another four or eight years.

Although this solution satisfied the EU, the DUP (Northern Ireland party) signalled early that it would not support the deal, costing Johnson a precious 10 votes. Given that Johnson now rules with a minority of 43, passing the deal through parliament was always likely to be an uphill struggle. Adding to the political drama was the pressure exerted by the looming deadline imposed by the Benn Act, designed to prevent a no deal Brexit. If Johnson could not get parliamentary approval of his deal by 11pm on Saturday, he would be forced to request an extension to the Brexit withdrawal date, currently set at 31st of October.

Given that Johnson has repeatedly insisted that the UK would leave the EU on the 31st of October “do or die”, a number of MPs began to suspect this could be achieved through political manoeuvring designed to circumvent the Benn Act. They feared that hardline Brexiters could support the new Brexit deal on Saturday to meet the requirements of the Benn Act, but then vote against legislation to implement the deal - thereby forcing a no deal exit on the 31st of October. This potential strategy was foiled by the tabling of Oliver Letwin’s amendment before the vote on Johnson’s Brexit deal. Acting as a cunning insurance policy, the Letwin amendment withholds approval of the Brexit deal until the legislation required to enact it (the Withdrawal Agreement Bill) has been passed. The Letwin amendment was passed by 322 to 306 votes with backing from the DUP providing 10 crucial votes to get it over the line. Roars of approval could be heard inside the commons from the estimated one million people outside marching for a second referendum on Brexit.

Victory for the Letwin amendment triggered the Benn Act since Johnson could no longer get his Brexit deal approved before the 11pm deadline. Instead, he was legally obliged to send a letter to the EU requesting an extension until the 31st of January 2020. Reacting to this humiliating defeat, Johnson sent three letters to European council president Donald Tusk: an unsigned photocopy of the required request for an extension, an explanatory cover letter from the UK’s ambassador to the EU and a personal letter signed by Johnson making clear that he believes another extension would be damaging. Tusk will consult with the EU27 heads of state but there is little doubt that the extension will be granted.

On Monday the government is expected to table the Withdrawal Agreement Bill with voting expected on Tuesday. The leader of the House of Commons, Jacob Rees-Mogg said the government will also attempt to hold another "meaningful vote" on Johnson’s Brexit deal but the speaker of the house John Bercow indicated that he may not allow it. Dominic Raab however has stated that “We appear to have the numbers to get [the deal] through”, yet with the Financial times calculating Johnson could win with a majority of just 5 votes, it’s clearly on a knife-edge. Meanwhile, MPs who support a second referendum are likely to table an amendment to the Withdrawal Agreement Bill making the approval of any Brexit deal conditional on another public vote. Reports are also circulating that the EU will indeed allow an extension until February 2020. If one is even needed. 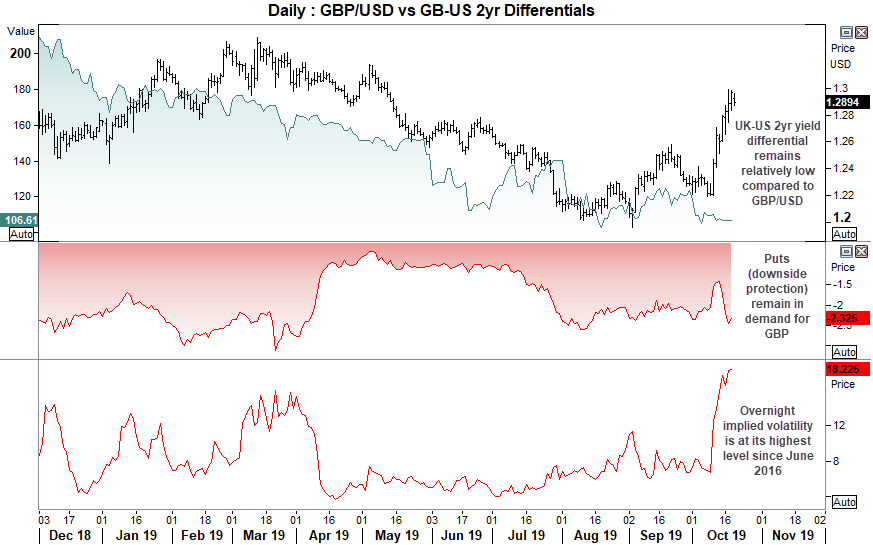 The British pound remains elevated and has avoided any major gaps over the weekend. However, implied volatility remains at its highest level since June 2016, so traders are bracing themselves for some large moves this week as the headlines roll in. Moreover, demand for puts (bearish bets) remains high, the UK-US 2yr yield differential remains anchored to its lows and has not rallied with Sterling. We expect this gap to be closed in due course but whether that means a lower GBP, higher differential or combination of the two remains to be seen. As before, we’ve included implied volatility (IV) levels for overnight and 1-week IV. Options market suggest ~62% chance that prices will fall in between these levels. 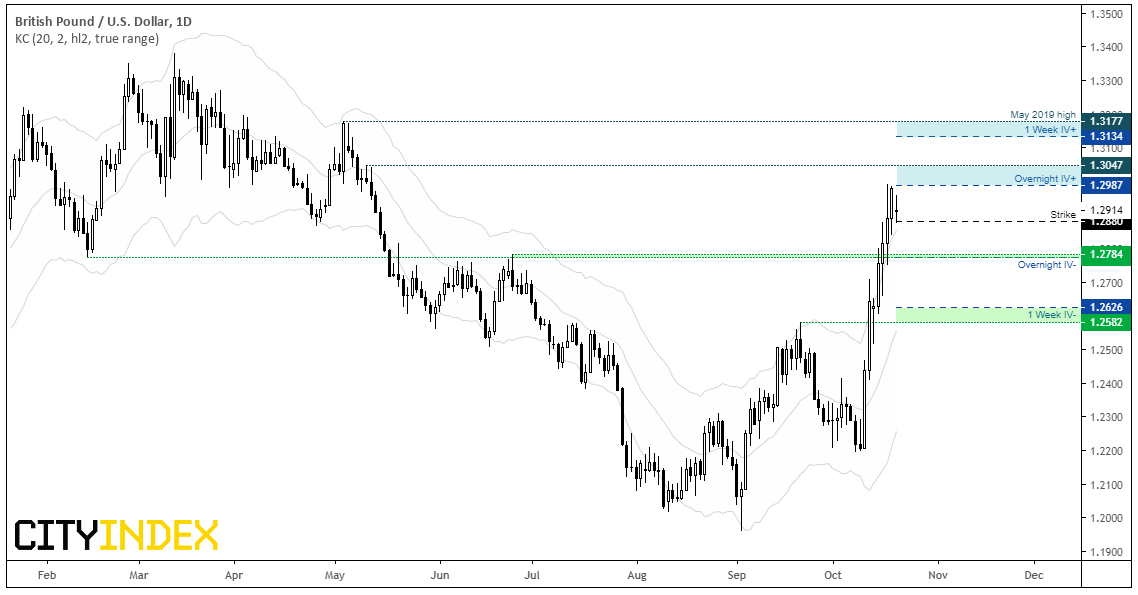 GBP/USD: As with all GBP pairs, Sterling appears technically overstretched and in need of some mean reversion. Yet given the significance of upcoming events, we still can’t rule out new highs if BoJo somehow gets a deal through. And with over 500-pips between the 1-week IV high and low, this leaves plenty of room for whipsaws as the week progresses. 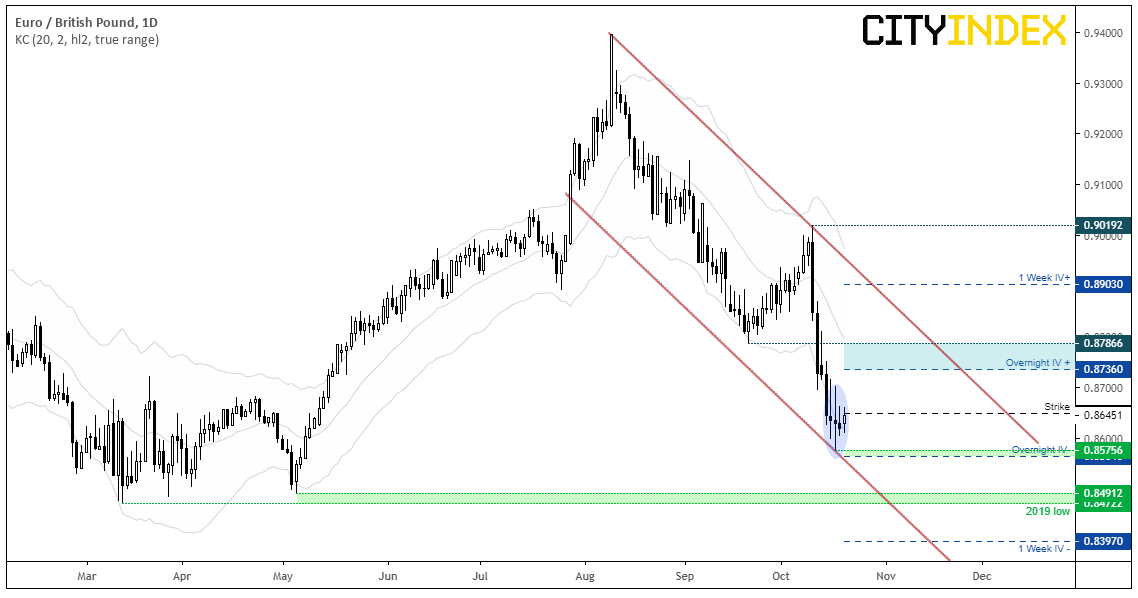 EUR/GBP: Price action remains within the bearish channel, although three doji’s at the low suggest it could be trying to form a base and perhaps flag potential for this elusive mean reversion. We’ll believe it when we see it. 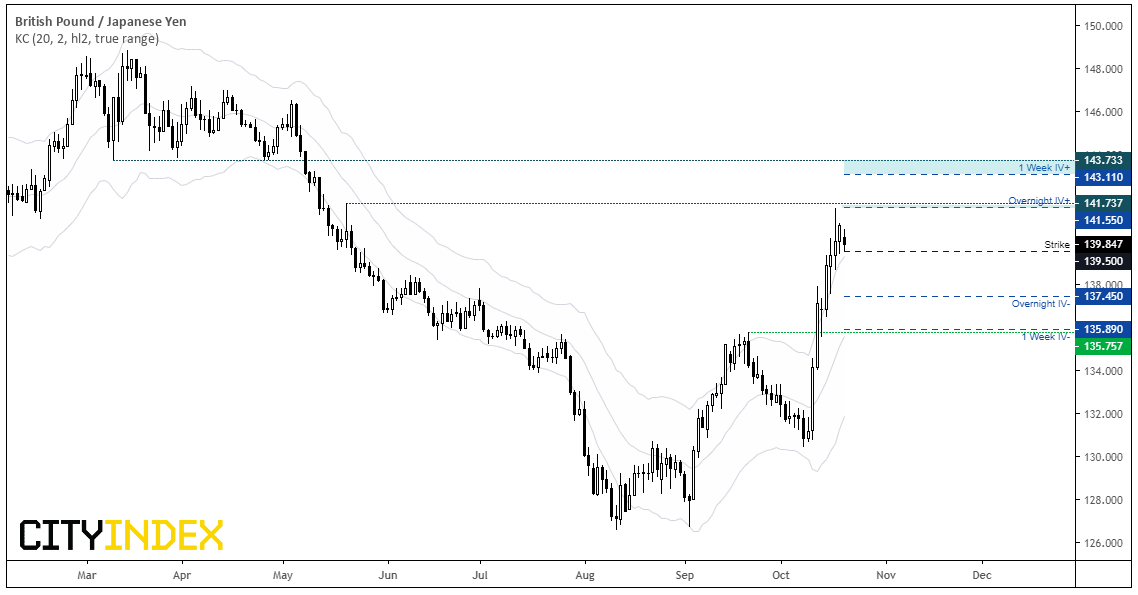 GBP/JPY: Interestingly, overnight implied volatility saw the biggest rise among the three pairs which takes its potential +/- range closer to the weekly range. Also note that the overnight + level is just below 141.74 resistance and the 1 week – IV is just above the September high, which adds weight to these key levels. 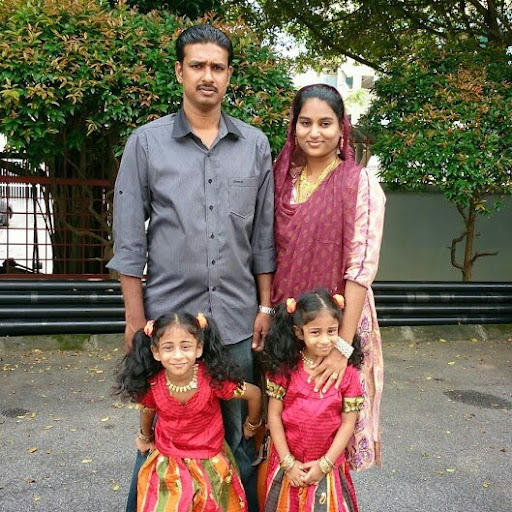