BP (LON:BP) has been rewarded with a share price surge that peaked almost 4% higher for bucking Big Oil’s weaker second-quarter trend, so far. Adjusting for one-offs, BP’s net profit was $2.81bn, largely flat against Q2 2018, but sharply above the $2.48bn expected. Investors seem all the more impressed because this outperformance was largely attributable to upstream earnings that confounded the showing by rivals Total, Eni and Norway’s Equinor, in Q2, when prices gyrated wildly. A 4% rise of oil and gas production per day helped.

The one aspect that mars the profit advance is input from a tax effect. BP’s effective tax rate fell to 34% in Q2 versus 42% the year before. Taxed by another 8 percentage points, profit shifts closer to expectations. These were, presumably, largely priced in beforehand.

Operating cash flow growth of $8.2bn was also ‘flattered’, and so not quite the highest since late 2017 on an underlying basis. Note a £1.5bn working capital release. At $6.7bn, unadjusted cash flow is well below most expectations. As such, the stock market reaction, which initially saw the stock add 3.7% was moderating by the mid-session as investors curbed expectations about rising returns.

There are several further reasons why BP’s cash returns are unlikely to rise faster than initially expected:

So there may not have been as much to buy in these results as at first appeared. A radical change of the stock’s progress this year looks unlikely. The group maintains a steady pace towards 2019 goals though isn’t accelerating. BP was up 9% in 2019 at last look, having ceded 7% since late April.

On a relative basis, BP’s figures may even read across to supermajors with higher shale exposure, for instance in the Permian basin. With Shell (LON:RDSa), Exxon (NYSE:XOM) and Chevron (NYSE:CVX), reporting in coming days, strong performances may keep pressure on shares of their British rival.

The first thing to get out of the way, in more ways than one: Tuesday’s reaction has created a monstrous gap. The top of Monday’s wick printed at 532.1p compared to Tuesday’s 546p open and 540p low. The orderly, low-beta nature of the stock points to gaps being closed more often than not. That said, demand is rising, translating into a sharp uptick of BP’s Relative Strength Index, which is rallying classically from oversold lows in the middle of the month. That offers a chance that the advance could be extended. What militates against protraction however is the descending trend line from April’s 2019 high. In fact, as I write the shares appear to have ventured no higher. More promisingly, that line forms a symmetrical wedge, together with an impressive rising trend line that is much lengthier, stemming from 6th January 2016. Together with supportive kicks higher off 515p in February and earlier this month, probabilities of a bullish break out closer to the apex look decent. If that materialises, buyers would then set their sights on the 561p-566p reversal zone. The caution is that such hopes would be moot if follow-through from today’s jump is tardy. 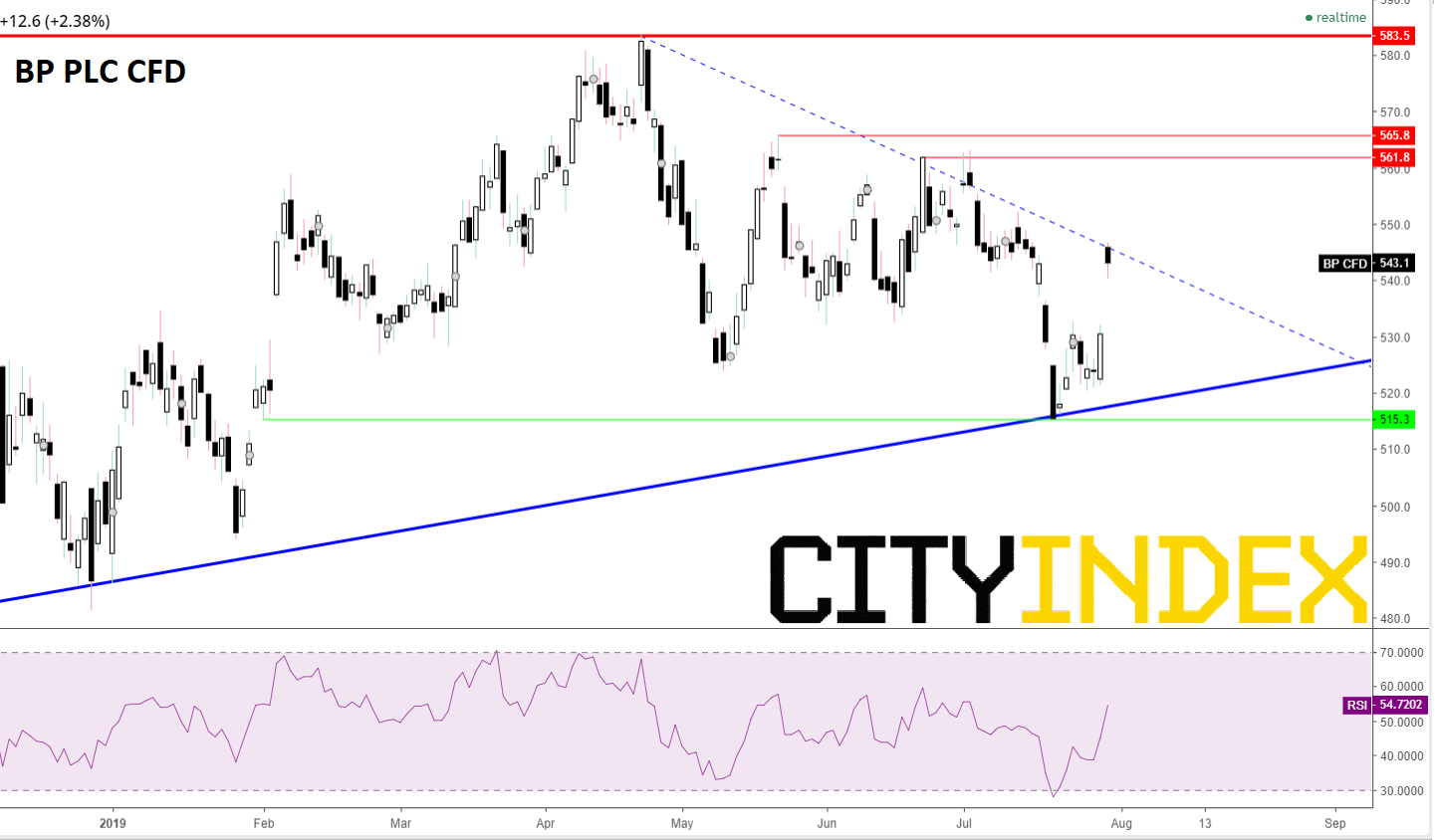