There was a time, just after the first oil crisis in the 1970s, that the collection of emirates and kingdoms along the Persian Gulf coast were so flush with cash that the biggest challenge they faced was how to “recycle” all that money.

That gave birth to a flourishing Eurobond market, back when Eurobond meant dollar-denominated bonds sold outside the US.

Those days are long gone. Now it is those emirates that are tapping into international investors with a flurry of government bond issues that have generated massive demand. The reason? They bear a slight premium to US Treasuries.

It’s not that Dubai, Abu Dhabi, Qatar, or Saudi Arabia have fallen on hard times, despite the ongoing move away from fossil fuels and the sharp fall in prices of oil and gas due to the COVID-19 pandemic. All those reserves are still there, but the oil-rich countries of the Middle East have a cash flow problem, something needed to maintain the lifestyle they are accustomed to.

Fossil fuels are clearly in something of an eclipse. Perhaps the biggest tell—energy super-major Exxon has been kicked out of the Dow Jones Industrial Average, which it first joined in 1928 as Standard Oil of New Jersey, as the stock market benchmark shifts its weight in favor of tech companies. 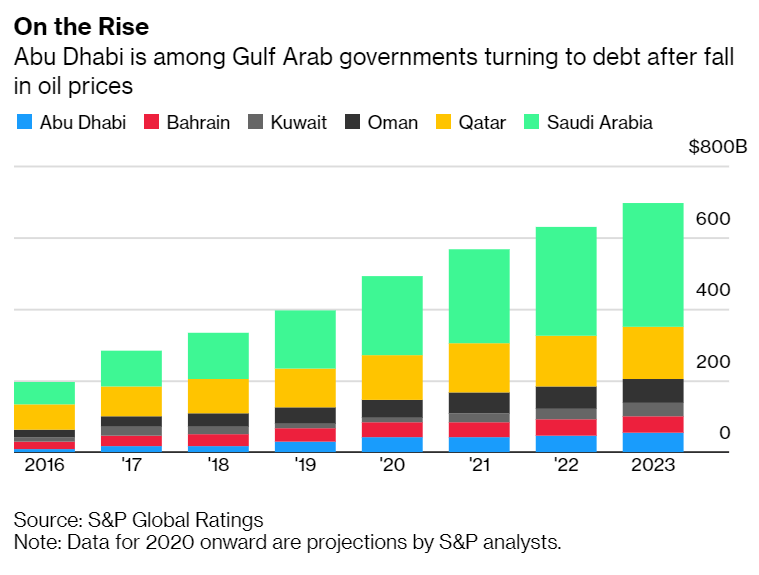 Nonetheless, the appetite for these Gulf bonds, backed by each country's oil and gas reserves, seems quite large and not nearly sated.

Dubai is the latest emirate to sell bonds, telling banks to find investors for 10-year and 30-year bonds—a mix of conventional and sharia law sukuk. Dubai is aiming to raise up to $2 billion or more in its first bond issue since 2014.

Dubai has only a fraction of the oil reserves of neighboring Abu Dhabi, which is the capital of the United Arab Emirates grouping, altogether seven emirates.

Abu Dhabi has been leading the charge so far. It raised a total of $10 billion in April and May in two sales. Last week, it priced a new offering of $5 billion in a three-tranche issue—three years, 10-1/2 years, and 50-years.

The bonds met with enough demand that pricing was below the initial indication, coming in at 65 basis points over US Treasuries on the $2 billion of 3-year notes, 105 bps for $1.5 billion of the 10-1/2-year, and 270 bps premium for the 50-year.

Though many governments are planning to be carbon neutral by 2070 when that long bonds fall due, investors happily snapped it up. Returns on ultra-long bonds can be quite high even in the short term, because the phenomenon of duration—discounting weighted payments over time to present value—magnifies even the smallest change in interest rates. Pension funds like them because it improves their maturity match.

Qatar, which juts separately out into the Gulf, has the world’s third-largest natural gas reserves, mostly offshore, and is the world’s largest exporter of liquefied natural gas. It raised $10 billion in April after that amount was 4.5 times oversubscribed.

The spread over Treasuries in five-, 10-, and 30-year securities was even more generous. Qatar sold $12 billion in bonds last year.

The amount of investor interest in these issues bodes well for further sales as the Gulf countries bridge over the dip in oil prices. Everyone expects some sort of rebound in oil prices and in any case the break-even price for countries like Abu Dhabi with low production costs is not very high.