Market sentiment remains fragile. There’s a lot of emphasis being placed on the virus numbers in economies that have been gradually reopening. Wuhan, the City in China where it all began reported its first ‘cluster’ of new cases yesterday after lifting restrictions a month ago. The biggest risk to the upswing in markets is a second wave in the pandemic. So far investors don’t want to jump the gun because case numbers can easily fall back again.

The price of Bitcoin has been volatile even by crypto standards- the price tanked over 50% in just one week of March but it bottomed quickly and has since more than doubled to top 10,000 last week. A lot of that volatility has been in anticipation of today’s event; the halving.

As of sometime today, the amount of tokens Bitcoin miners get from mining will be cut in half. This is supposed happen every four years in order to reduce the total supply of new Bitcoins until it hits a maximum of 21 million sometime ways off in the future.

What does this do to the price? The bullish case is that this slows the growth in supply of new Bitcoins. The law of supply and demand says, assuming constant or rising demand growth each Bitcoin left after the halving should be worth more. The idea of slowing cryptocurrency supply is especially compelling when contrasted to central banks that are all rapidly rising the supply of fiat currency to support economies in the pandemic. The miners will also be selling less Bitcoins in the market, reducing selling pressure. The most straight forward bearish case is that the halving has been well telegraphed so the current price should already reflect it.

The FTSE 100 has opened lower with Vodafone (LON:VOD) shares in focus after it pulled earning guidance. Vodafone met full-year expectations but said it was unable to put forward guidance for the current year. The emergence of a big new competitor in O2/Virgin will not have helped clarity on the year ahead. Extra reliance on mobile communication during lockdown could bolster revenues from corporate customers in the first half but a prolonged virus-induced recession will likely see lower mobile phone upgrades.

Germany’s ‘reproduction rate’ rising back above 1.0 is a burden on the DAX index where shares of Thyssenkrupp (DE:TKAG) are under radar. The steel/submarines group lost 948million euros in its fiscal Q2 and forecasted a loss of over 1 billion in the current quarter. For the moment investors expect the sale of the elevator division to offer some relief come September. We are concerned that if economic conditions worsen, buyers Advent and Cinven could drop the deal. That would lead to much bigger losses or even government aid.

The dollar has broken out to a new 2-week high over the Japanese yen (USD/JPY). The price action suggests traders have chosen the dollar as a preferred haven over the yen. The People’s Bank of China saying it plans to ease monetary policy further in China as well as a new virus outbreak in Asia are both extra risks associated to the yen.

Gold has still not made its move one way or the other beyond $1700 per oz. The Nasdaq Composite turning positive for the year is not gold-friendly but Fed funds futures suggesting negative US interest rates very much is.

About a week and half before crude futures contracts expire and it looks like oil markets are not quite ready to adjust for the risk of negative prices. $29 has capped Brent with $20 a short term top for WTI. API inventories later today could be a trigger for any breakout or reversal. 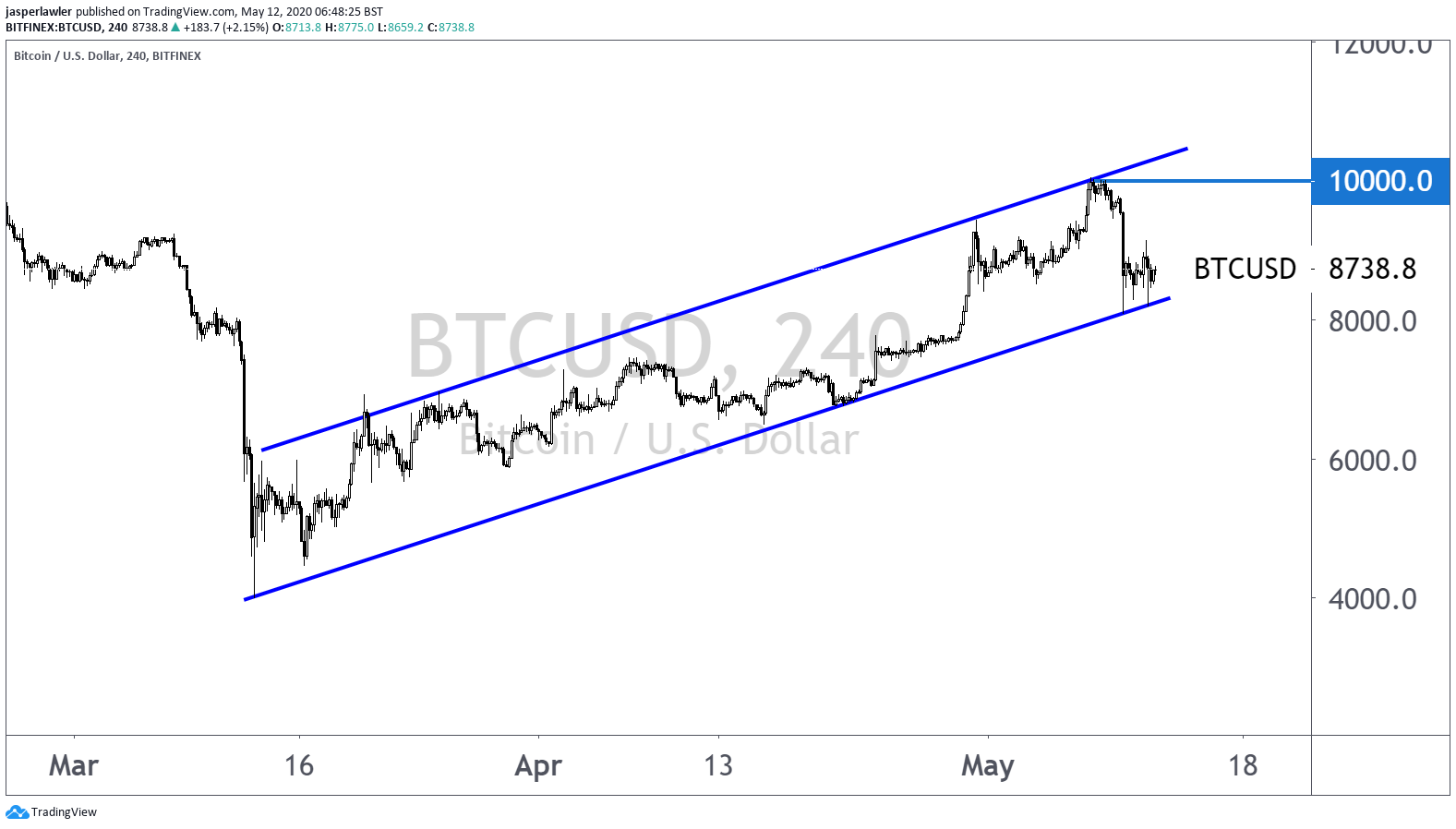 The Bitcoin price remains inside its upward channel but below 10,000 on the day of its halving.