There's more uncertainty in store for investors in the some of the US's largest banks, after the Fed’s move to restrict their dividend payout and share buyback plans.

The Federal Reserve told 33 of the largest US and global financial institutions on Friday they’re not allowed to hike their dividends or resume buybacks through at least September, amid the global coronavirus pandemic which has pushed the US economy into a deep recession and increased risks for lenders.

The decision came after the central bank’s annual stress test which examines banks’ ability to survive in a downturn. Through these tests, the Fed can force a change in an institution's capital-return plans, such as dividends and share buybacks, to avoid a situation like the one these lenders found themselves in after the 2008 Financial Crisis.

The Fed’s recent test includes a new formula for dividends that dictates that a lender’s payout cannot exceed its average net income from the previous four quarters.

The Fed “is taking action to assess banks’ conditions more intensively and to require the largest banks to adopt prudent measures to preserve capital in the coming months,” Fed Vice Chairman for Supervision, Randal Quarles, said in the statement.

“The banking system remains well capitalized under even the harshest of these downside scenarios.”

During the months-long coronavirus lockdown, the biggest US banks didn’t change their payout policies. For the first three months of 2020, the four biggest U.S. commercial banks—Bank of America (NYSE:BAC), Citigroup (NYSE:C), JPMorgan Chase (NYSE:JPM) and Wells Fargo (NYSE:WFC)—all paid them, with JPMorgan and Wells Fargo paying out more than their net incomes.

Uncertainty about the dividend plans from these lenders means investors have little incentive to own shares of these companies, especially when their earnings are coming under pressure during the ongoing recession.

A Period of Underperformance

The KBW Bank Index plunged 6.4% on Friday after the news, to the lowest in a month. 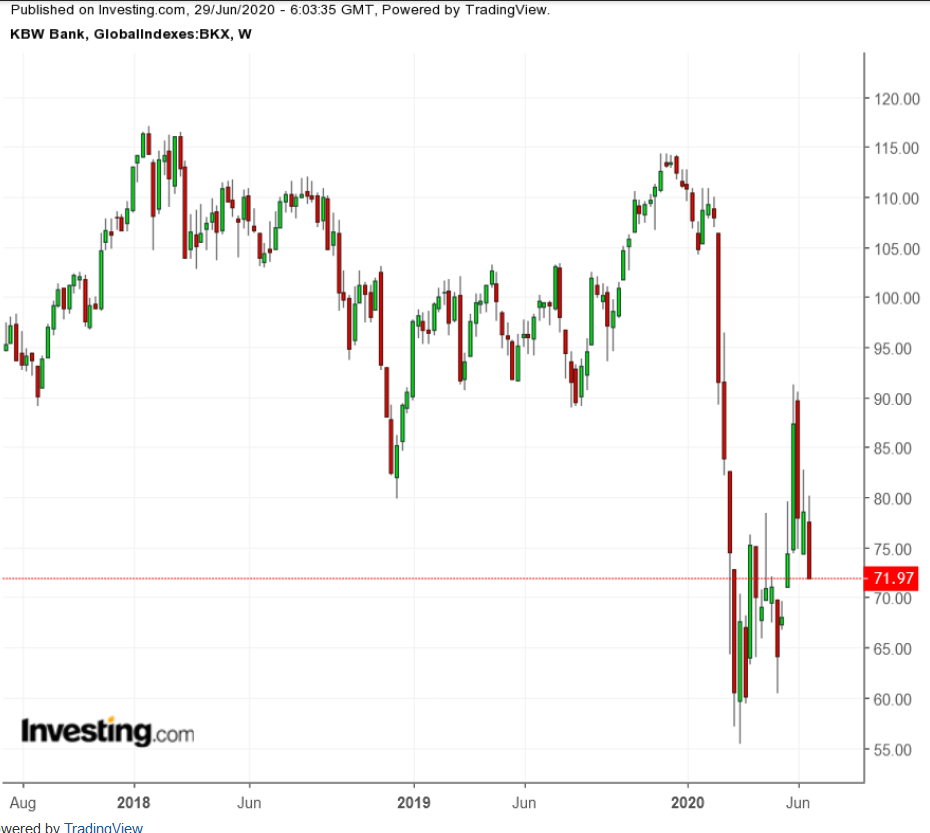 The index has fallen 36% this year, massively underperforming the S&P 500 during the period as the health crisis and lower interest rates hurt banking profits.

Going forward, we see more pressure on banking stocks, especially when the US is potentially facing a second coronavirus wave and delaying the reopening of the economy. The new cap on dividends and demands for further rounds of stress testing give the Fed flexibility to change their capital return policy if the economy worsens.

That said, all banks are not in the same boat. Wells Fargo and Capital One Financial (NYSE:COF), for example, are the most likely to cut dividends soon, while Citigroup and Morgan Stanley (NYSE:MS) could continue with their current payouts.

Wells Fargo would need to cut its Q2 dividend to $0.36 from $0.51, and Capital One would have to slash its payout to zero, from its current $0.40, according to a research note by Morgan Stanely.

The Fed has put “the market on notice that dividends could be suspended or restricted more severely starting in the fourth quarter if bank losses grow and the economy gets worse,” Cowen analyst Jaret Seiberg said in a note.

That’s likely to “disappoint all sides,” as “big bank critics will be upset that banks are able to pay any common dividends even though dividends make up less than 30% of capital that is returned to investors. And the banks are likely to be upset that the sensitivity analysis for COVID-19 did not incorporate federal stimulus, which has been extensive,” her note said.

Stable and growing dividends were the primary attraction for many investors who bought bank stocks in this highly uncertain economic environment. The Fed’s recent move has introduced a significant amount of uncertainty into the capital return plans for the big banks, at least as long as the pandemic continues to weigh on the economy.