The Australian dollar continued to ease further after the Reserve Bank of Australia kept its monetary policy unchanged, as widely expected, on Tuesday. The AUD/USD fell to a low so far of just under 0.7150 from a high of about 0.7235 pre-RBA. Clearly, the bears appear to be in driving seat, but could that change soon?

The renewed weakness of the Aussie is a reflection of several fundamental events that has gone against it this week. First it was weighed down by weaker Chinese manufacturing PMI data over the weekend, followed yesterday by the RBA’s decision not to provide any hints over a near-future rate increase.

Overnight, it was poor domestic data knocking down the Aussie even in light of a big jump in gold prices the day before. It was an unexpected 9.4% month-over-month drop in August building approvals that did the damage this time. While the drop is eye-catching, building approvals tend to be quite volatile, so one should not read too much into it. Nonetheless, this is the second consecutive monthly drop, which bodes ill for future construction activity in Down Under.

But perhaps the biggest reason why the AUD/USD cannot catch a break is the widening of the yields spread between Australia and US government bonds. At the time of writing, the yield spread between the US-Aussie 10-year bonds was around 43 basis points, the widest spread in at least 30 years. The yield has widened because the US Federal Reserve has been hiking interest rates while the Reserve Bank of Australia has stood still.

For as long as the yield spread widens in favour of US Treasuries, the AUD/USD will struggle to stage any sustainable rally. However, could that dynamic change soon?

Well, for a start, the next several rate hikes in the US are being priced in. So, if one can assume that the markets are efficient in discounting future events, the impact of US monetary policy tightening should have diminishing impact. What’s more, the RBA’s next move is very likely to be a rate hike than a cut. After all, the central bank wasn’t too dovish at all on Tuesday. Governor Philip Lowe said Australia can expect to see higher inflation while unemployment is set to fall past its current six-year low of 5.3%, although he also added that weak household spending was a source of uncertainty.

Should the RBA turn out to be correct in its views over inflation and unemployment then we wouldn’t be surprised if the AUD/USD were to start climbing higher over the coming weeks and months. Indeed, even in the near-term outlook, there is a possibility for the Aussie to push higher due to the fact that metal prices, including copper, have shown bullish behaviour of late again. Given the fact that Australia is a large metals exporter, firmer commodity prices are seen as being positive for the Australian economy and therefore the Aussie dollar. Thus, if metal prices were to rise further then surely this should help to ease the pressure, one would think.

So, fundamentally, we think that the drop in the Aussie could be short-lived. Technically, however, we are yet to see a major reversal to confirm our suspicion. This means that while we are on the lookout for a reversal to unfold – and we will inform you if and when we think that has happened – further short-term losses will come as no surprise to us.

That being said, some tentative bullish price behaviour has already emerged in September, although it is not a great signs that after a deep pullback, the bulls are nowhere to be seen.

In September rates refused to hold below the 2017 low of 0.7165/70 level, which made us alert to the possibility of price finding a potential bottom. This area is roughly were the Aussie is trading around at the moment, so let’s see if it will hold on a daily closing basis and lead to a bounce in the days to come. Thus, for as long as the AUD/USD remains above this level on a daily closing basis, one could be hopeful that rates might push up from here. However, if the most recent low that preceded the latest rally at 0.7085 breaks down cleanly first, then all bets are off again. In this potential scenario, we would have to wait for further price action to unfold before updating our technical directional bias. In any case, though, if and when the AUD/USD were to eventually break above the bearish trend line then this would be a bullish outcome regardless of the short-term price fluctuations that may take place before hand. 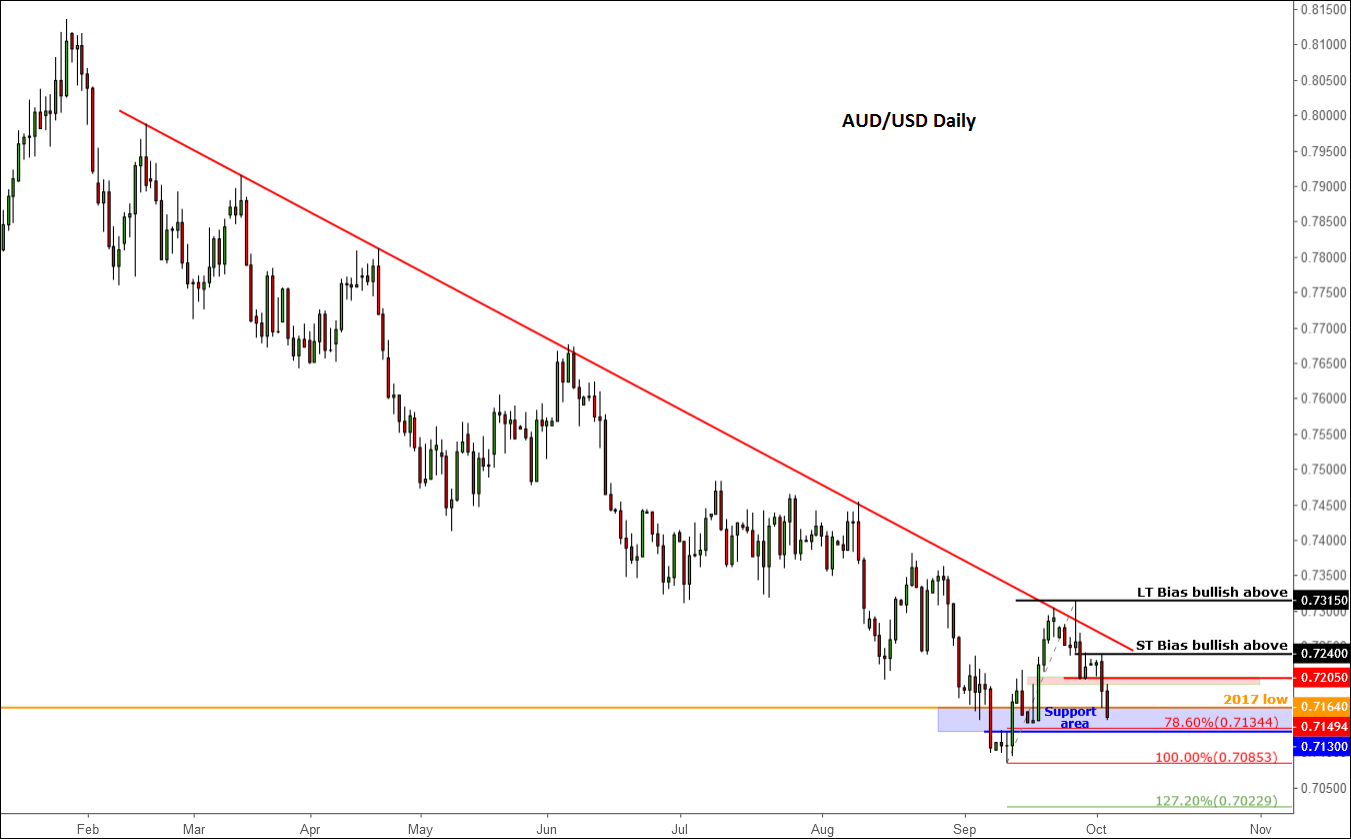 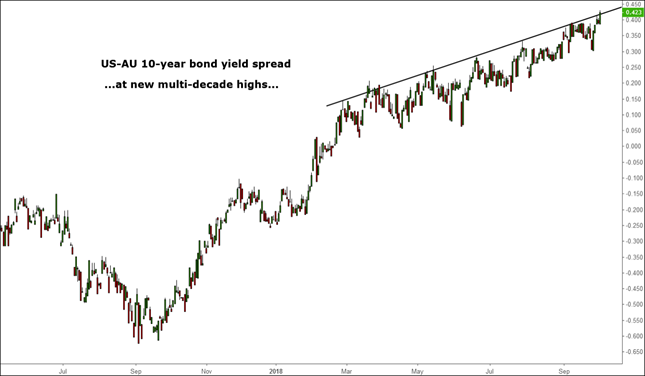