Summer heat has landed across the U.S., without a doubt. What remains a question is whether $3 pricing will be possible again for natural gas in the coming weeks as air-conditioning demand spikes with people struggling to stay cool amid the sweltering weather.

With the U.S. Energy Information Administration expected to report the third weekly storage build of natural gas under the 100 billion cubic feet mark, prices of the fuel are up accordingly for a third straight week—the first time in two months that they have set such a trend. The EIA is forecast to cite a build of 73 bcf for the week ended July 5, after 89- and 98-bcf builds in the two previous weeks. 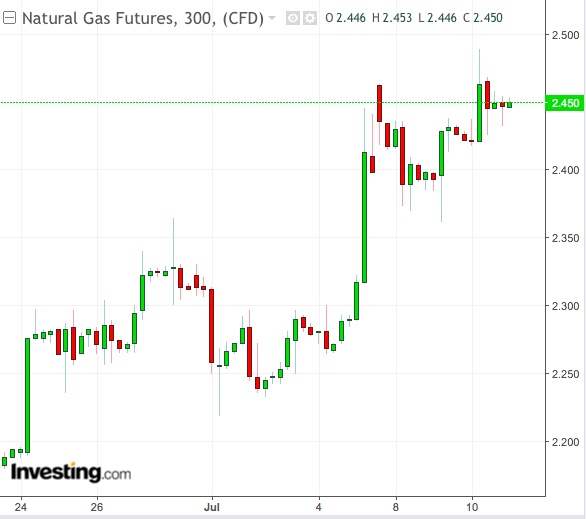 The benchmark August gas contract on New York Mercantile Exchange’s Henry Hub is up more than 1% week-to-date, after two previous weekly gains of 4.8% and 5.6%.

At just under $2.50 per million British thermal units (mmBtu), the contract seems well placed to advance in its current price channel.

“The August contract at $2.485 (is) set up for a test of resistance at $2.50. An extra catalyst, perhaps in the form of the (EIA) storage report, will be needed to propel the market all the way through this psychological barrier.”

If that resistance is taken out, then technical indicators as well as fundamentals point to $3 being the next logical barrier.

Investing.com’s Daily Technical Outlook has a bullish projection for natural gas. Branding August gas a “Strong Buy”, it projects an upside as high as $2.557 per mmBtu.

August gas is currently hovering at the 50-Day Moving Average. A move into the $2.50 range would bring it into the 100-DMA level, while $3 and beyond would take it into the 200-DMA.

One reason natural gas had not broken out into a major rally for a while is the benign weather for this summer, which had resulted in little need for air-conditioning on most days.

Record production of the fuel had also suppressed prices. Gas output in the Lower 48 U.S. states rose to an all-time daily high of 91.1 bcf per day on Friday, according to data provider Refinitiv, a unit of Thomson Reuters.

But with heat levels spiking now, more of the gas produced daily was being burnt to power air-conditioners, resulting in less going into storage.

“The market has been encouraged in recent days by the turn to smaller injections.”

“The heat building next week may result in the first below-average storage build of the injection season and could provide enough fuel to sustain the rally.”

Last week’s weather was warmer than normal with 94 cooling degree days (CDDs) versus a 30-year average of 80 CDDs for the period and 106 CDDs for the same week last year.

CDDs measure the number of degrees a day's average temperature is above 65 Fahrenheit (18 Celsius), and are used to estimate demand to cool homes and businesses.

“The next week or so should see higher-than-normal call on natgas for cooling-related demand, as summer weather remains settled in major parts of the country.”