Are We Back To Melt-Up?

Are We Back To Melt-Up?

August is traditionally a volatile month in the stock markets – and this one is no exception. Already we have seen five large waves of 1,000 pips in the Dow up and down this month. As I noted to my VIP Traders Club members, we are truly in Whipsaw Territory as the market struggles for direction.

I have played this very difficult month in the way that makes sense for me. Odds still favour the July high as the ATH and we are in a tricky bear market rally. That means I am only interested in short positions as I generally avoid trading against the main trend. I have shorted on extreme bounces and taken some profits on the decline, or I have sat with my short trade only to get stopped out at break even on the reversals. Losses have been minimal – as have gains.

But I consider that result a success! Losing as little money as possible must be the trader’s first objective. If it isn’t. the trader’s long term success is in severe jeopardy.

There has been no shortage of market-moving tweets this month, especially from our Tweeter-in-Chief Mr Trump and the Chinese authorities as they spar in the ring in the Tariff Wars. In fact, the latest tweet from China hinted at a forthcoming meeting to ‘iron things out’ and the algos made sure that boosted the Dow (again).

Meanwhile, I note the supreme positive feelings in the USA as the latest Confidence survey shows confidence at a high. Here is an interesting chart of the confidence against US savings rate. Confidence is back at the level where the Dot com stock mania ended in 1999 before the huge bear market erupted. Remember, bear markets always start when sentiment/confidence is extreme.

The other main point here is the large gap between confidence and the savings rate. Whenever the gap becomes large, that’s when stocks peak.

But don’t worry – stocks are headed higher! Latest Q2 GDP revised data shows a drop to 2% – and down from Q! at 3%. This must qualify as ‘bad news’ and surely justifies the Fed to ‘stimulate’ by cutting Fed Funds again next time. Sarcasm aside, with Fed Funds actually positive as an odd-man-out in the developed world, odds are high they will cut especially with the market rate of 3m T-Bills (at 2%) luring it lower.

With heavy political pressure on as well to force the Fed to cut, will this ensure Treasuries continue their manic rally into the stratosphere? After all, just about everyone I read is calling for yet lower US yields – and some are even jumping the shark to go negative to match the ECB.

But hold your horses! I trade the 30-Year T-Bond and what many are over-looking is that it has an inflation expectation component. Inflation has been low, but will it stay that way in the near future? In the US, wages/salaries are on the rise and now, crude oil has recently surged off the recent $50 low 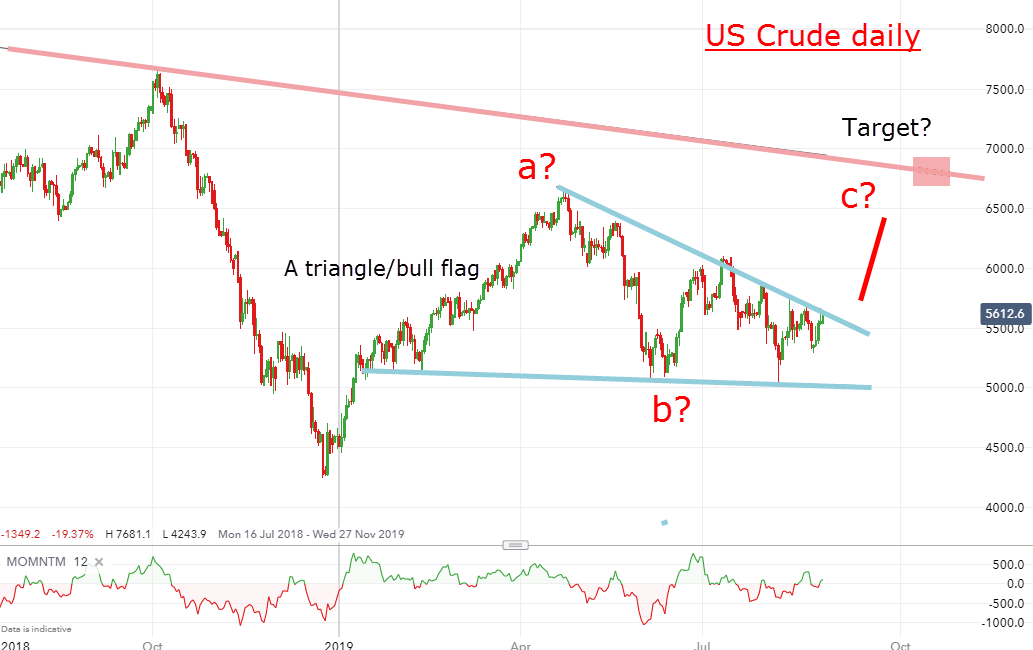 It is now testing the upper blue triangle line and a clear break above it will likely send it up towards my first target at the $60 region. US gas prices at the pump are set to rise. And with full unemployment and money in consumers’ pockets, maybe inflation will pick up off the floor – and start to approach the Fed’s much-missed 2% target rate.

With current 30-yr yield below 2%, there is no room for any inflation factor with the 3-Month T-Bill yield at the same level. They are priced for zero inflation for the next 30 years! I call that supreme optimism. What if inflation rises to 3% and yields rise to 2.5%? The effect on Treasuries will be hugely magnified. That is why I am poised to short Treasuries for my clients.

So even if the Fed does cut Fed Funds, Treasuries may well start to come off their highs as investors start to price in just a little inflation.

The recent 30-Year German Bund that pays an amazing zero interest is yet another warning sign that we are far down the rabbit hole – and probably out the other side.

I have noted the super-bearish commentary in the MSM on stocks which has tempered by own bearish stance this month. And in fact, the Dow is powering ahead as I write 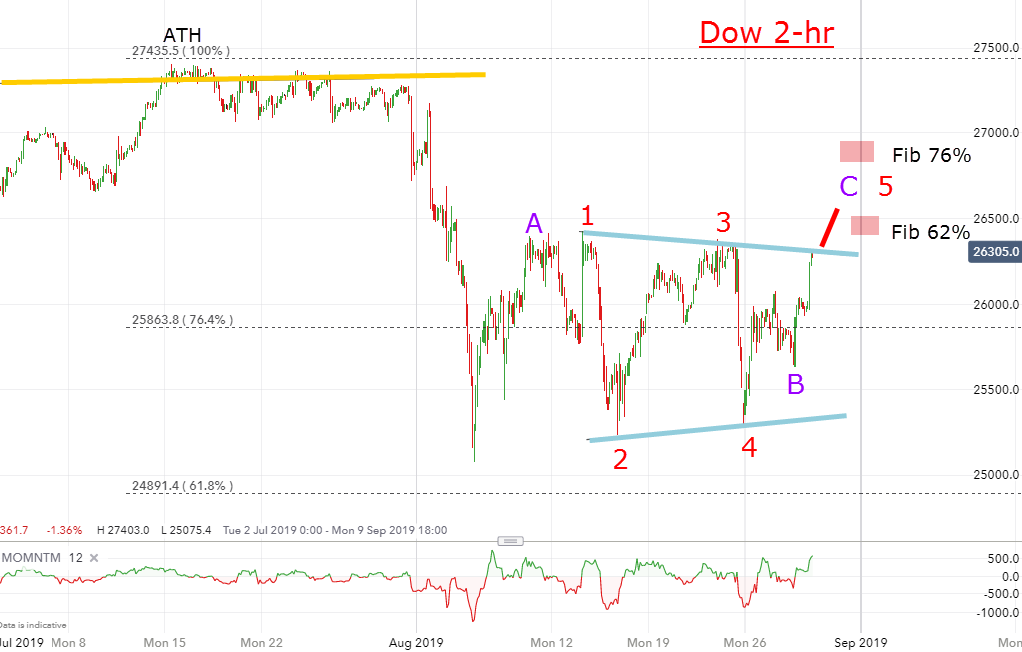 It is currently testing the upper blue trendline and if it pokes through with force, my next target is the 26,800 region at an important Fibonacci level.

In fact, the two blue lines joining tops and bottoms during August comprise a triangle with the regulation five waves.

If the masses of buy stops above the recent highs are taken out, I can see a realistic target at the 26,800 area being achieved quite quickly.