Aphria's May Surge In Stark Contrast To Cannabis Sector Peers

Aphria's May Surge In Stark Contrast To Cannabis Sector Peers 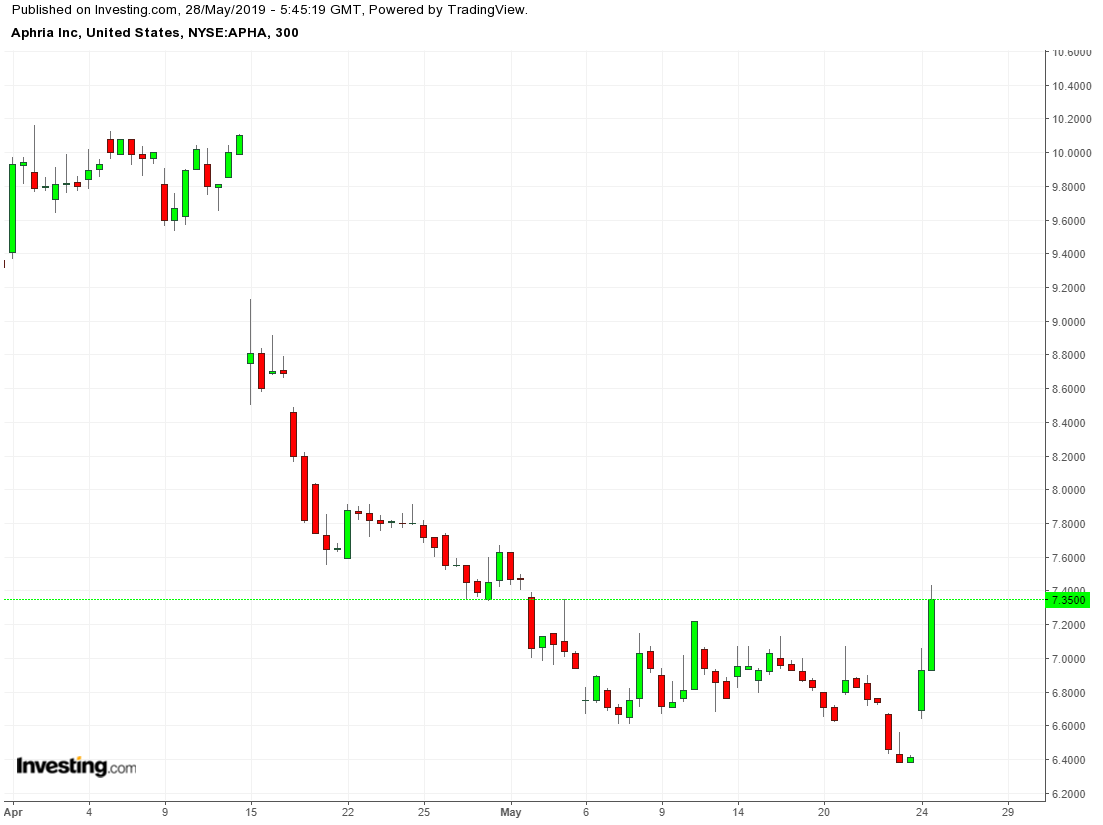 The Ontario-based licensed producer of medical pot and marijuana-based oils saw its share price go from U.S.$6.79 to U.S.$7.35 (CAD$8.62 to CAD$9.87) at the close, as Jeffries analyst Owen Bennett issued a price target of $11 (CAD$15), which would represent an almost 52% additional rise from Friday’s close.

“On our strategic scorecard, Aphria scores highly, and third overall behind only Canopy (NYSE:CGC), (TSX:WEED) and Aurora (NYSE:ACB),(TSX:ACB),” Bennett wrote in statement to clients.

In the past year, Aphria, which, with a current market cap of $1.93B, has consistently been in the top 10 North American cannabis companies by valuation, has also been considered one of the most under-performing stocks in the industry.

One of the reasons behind the stock’s poor performance can be attributed to governance issues, particularly negative headlines involving the September acquisition of South American LATAM Holdings last year, and claims by short sellers that the deal was priced too high. The allegations caused the stock's price to waver and the company to launch an internal investigation.

The review concluded the deal was within an acceptable range but discounted rates were applied. In January it was announced that Aphria CEO Vic Neufeld and company co-founder Cole Cacciavillani would “transition out of their executive roles” in the coming months. However, they remain on the board.

Adding to the stock's momentum: positive news last week that Aphria had been granted its fifth cultivation license in Germany. Germany is currently the largest cannabis market in the European Union. Last year, its medicinal marijuana market was worth U.S.$73 million. By 2023, it will be valued at U.S. $2.7 billion, according to estimates.

The German licenses to produce medical cannabis had been conditionally awarded in April, and confirmed May 21 following a review by a German court. The move means Aphria is the only licensed producer of all three of the legal strains of medical cannabis in Germany.

These licenses essentially function as contracts to supply a minimum of 4,000 kilograms of domestically grown cannabis that will be sold to the German government’s Institute for Drugs and Medical Devices, and supplied to wholesalers for distribution to pharmacies. Aphria’s contracts cover a four-year period that begins in 2020.

Germany issued a total of 13 such licenses, with a maximum of five allowed to a single producer, according to government guidelines. In addition to Aphria’s licenses, five were granted to Edmonton-Based Aurora Cannabis and three went to Berlin-based producer Denecan.

Although Aphria is poised to finish the month on a high note, overall, May has not been stellar for the pot sector. To put it in perspective, the industry has seen more downs than ups, with trends largely flat to lower for most of the stocks in the space.