Workers at the world’s largest copper mine, Escondida in Chile run by BHP, vote this week on whether to strike. But copper prices hardly tell that story, trading not too far from one-year lows hit recently. 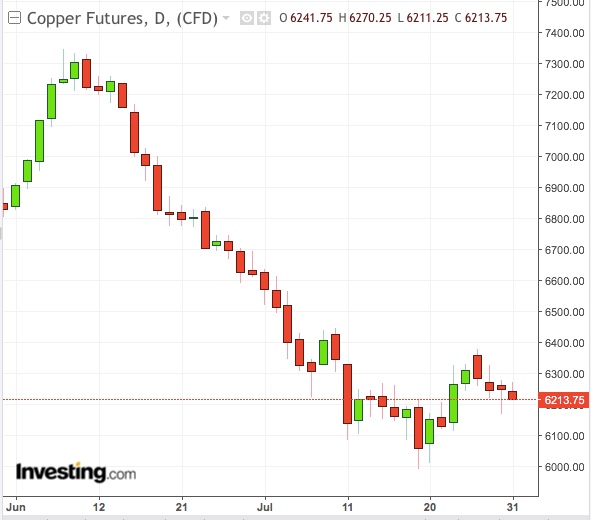 One reason for the market’s gloom? Artificial Intelligence.

From buy/sell decisions centered once on pure supply-demand economics and traders’ insights and guts, metals, energy and agricultural prices are increasingly decided these days by algorithms.

Growing almost without pause since the US authorized electronic exchanges in 1998, the trend-following High Frequency Trading (HFT) models account for up to 40% of global equity market volumes, though they command only about 10-15% on the average of forex and commodities activity.

Even so, a flash crash of oil prices in May 2017 was blamed partly on computer trading, highlighting a problem that some said deserved greater attention.

The FICC Markets Standards Board, which monitors fixed income, currency and commodity markets behavior, announced last week that it was laying out a transparency draft on algorithmic trading and invited comments from the industry.

The board insisted that the so-called Statement of Good Practice (SGP) will not shape regulation for algos. “Instead, an SGP is intended to be considered to the extent it is possible to follow it in compliance with applicable laws,” it said.

Some of this week’s market inertia in copper could be due to traders’ decision to wait on a raft of central bank rate decisions, US jobs data for July and other key macroeconomic data.

Still, TD Securities devoted a portion of its Monday note to HFT models and their impact on commodities under a heading it called “War Against Machines”.

“We argue that copper prices currently do not reflect the supply risk associated with a potential strike at Escondida,” TD said.

“Combined with current disruptions at Chuquicamata and ongoing negotiations at El-Teniente, nearly 10% of global supply could be at risk,” it added, citing two other Chilean copper mines owned by Codelco.

The Canadian bank-backed brokerage also said its study of estimated implied positions linked to the largest assets under management in commodities “highlights that systematic trend followers had a role to play in the recent decline in net length across the metals complex”.

Amram Margalit, content manager at Leverate, a service provider for forex brokers, said in a recent column that commodity firms were more inclined now to hire a mathematical or computer whiz for trading. “Market flow is now taking a backroom position to pattern recognition and artificial intelligence.”

He said automated trading sometimes accounted for as much as 25% in daily grains and oilseeds volume, smashing conventional estimates. “This is a direct result of shrinking margins, following the immediate dissemination of news, weather reports, and online cargo tracking. In the past, commodity traders easily saw profits in excess of 50%. Those profits have been halved, forcing them to look for other methods to make gains.”

But figures from BarclayHedge, a Fairfield, Iowa database for commodity funds’ returns, show discretionary traders under its watch returned 1.6% through June this year, versus a -2.8 percent posted by systemic trend-followers.

The weaker risk-reward profile for computer-led traders underscores the limitations of the algo model – it only reacts to pre-set criteria. If a deal fails, the algorithm would not try and acquire what was lost, but will instead close the deal at a loss and wait for the next signal to reattempt the trade.

“As a technology supplier, we are responsible for the technology, but cannot influence or examine the algorithms of companies working with us,” BeAlgo, a Bulgarian firm that builds systemic trading models for various industry, said in a statement on Monday.