Editor's Note: Given the current extreme volatility of cryptocurrencies, all prices quoted below were accurate at time of writing. We cannot be held responsible for changes to pricing and percentages that occur after publication.

Arguably the biggest craze in global financial markets in 2017 was the cryptocurrency takeover. A simple glance at Google) search over the past 12 months easily confirms the soaring interest in everything digital currency related over the course of this past year, especially during the second half. 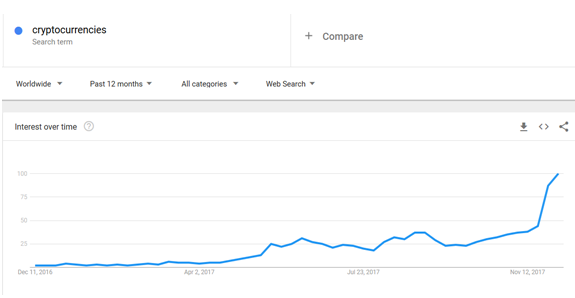 Back in June, the combined market capitalization of all cryptocurrencies hit a notable milestone when the industry surpassed the $100-billion-mark for the first time in history. Since then, that number has ballooned by almost 500% to $510 billion as of December 14.

The lion’s share of that interest is focused on Bitcoin, possibly the world's most popular cryptocurrency. It started 2017 at $966.60 before soaring to an all-time high of $17,500 on December 12, marking a year-to-date gain of approximately 1,600%. The price of Bitcoin last stood at $16,600, giving it a market cap of around $275 billion, larger than some of the oldest blue chip stocks and most famous brands in the world. 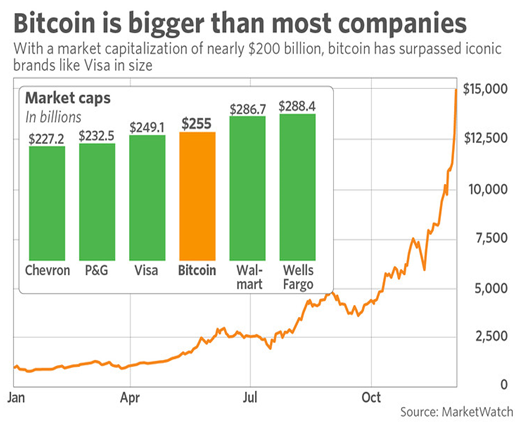 Besides Bitcoin, there are plenty of other lesser known alternative digital currencies that have enjoyed a remarkable run-up in prices so far this year, with some even surpassing the breath-taking returns of their older, more popular cousin.

While Monero took the crown in 2016, with growth of nearly 2,760%, 2017 has seen even more explosive gains in the cryptocurrency market.

Below, we look at the five biggest winners this year in terms of percentage gains. Surprisingly, there are a handful of coins that blow Bitcoin's jaw-dropping rally out of the water. In order to filter the 1,000+ coins which currently exist in the cryptosphere, we decided to focus only on digital currencies with a market cap of greater than $1 billion, which left a total of 20 coins.

With that said, here are the results:

NEM (XEM/USD) is a peer-to-peer cryptocurrency and blockchain platform launched on March 31, 2015. It was developed by Makoto Takemiya, who has been heavily involved in some prominent blockchain projects and was a key figure behind the decision in Japan to allow Bitcoin to become a legal form of tender.

Some analysts have suggested that its soaring popularity in Japan has been a big factor behind its whopping gains this year. The NEM blockchain software is currently used in a commercial blockchain called Mijin, which is being tested by financial institutions and private companies in Japan and internationally.

Ethereum is an open software platform based on blockchain technology that enables developers to build and deploy decentralized applications that run smart contracts. It was proposed in late 2013 by Vitalik Buterin, a cryptocurrency researcher and programmer, and launched in 2015. 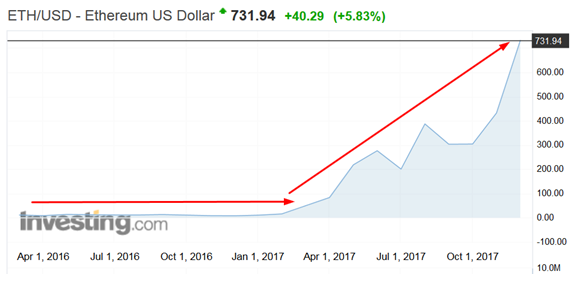 At current prices, Ethereum has a market cap of approximately $55 billion, making it the world's number two cryptocoin, trailing only Bitcoin.

This year's gains have been fueled by several bullish factors including increased public awareness and legitimacy, as well as the growing support of major global corporations.

The recently formed Enterprise Ethereum Alliance, which launched on February 28, 2017 consists of names such as Intel (NASDAQ:INTC), Microsoft (NASDAQ:MSFT), JP Morgan Chase (NYSE:JPM) and Credit Suisse (SIX:CSGN) to name a few, has been helpful in supporting the cryptocurrency's rapidly growing functionality. Its stated mission among other things is to act as "a resource for businesses to learn about Ethereum and leverage this groundbreaking technology to address specific industry use cases"

Released in 2012, Ripple is a real-time gross settlement system, currency exchange and remittance network. Also called the Ripple Transaction Protocol or Ripple protocol, it purports to enable secure, instant and nearly free global financial transactions of any size with no chargebacks.

Ripple has rallied an astounding 8,577% so far this year, taking prices from $0.00652 on January 1 to $0.53900 at time of writing. It reached $0.565600 on December 14, the highest in its five-year history. At current prices, Ripple's market capitalization is almost $22 billion, making it the fourth-largest cryptocurrency.

Ripple investors are hoping that the latest round of financial customers will help the digital currency undermine the dominance of banks and corporations over financial transactions.

Dash is an open source peer-to-peer cryptocurrency that offers all the same features as Bitcoin but also has advanced capabilities, including instant transactions, private transactions and decentralized governance. It was originally released as XCoin in Jan. 2014, before changing its name to Darkcoin the following month. Finally, in March 2015, Darkcoin was rebranded as Dash.

At current prices, Dash's market capitalization is $7.5 billion, making it the seventh-largest cryptocurrency in circulation.

Gains this year have been sparked by indications of growing acceptance by online vendors and even physical stores willing to accept Dash as a form of payment. So far, the cryptocurrency can be used at over 100 websites and 300 physical stores to purchase goods or services.

Litecoin, which was created in October 2011 by former Google) engineer Charles Lee, is a peer-to-peer cryptocurrency and open source software project. While inspired by, and in most regards technically nearly identical to Bitcoin, Litecoin has some technical improvements over its more popular counterpart, such as the adoption of Segregated Witness (SegWit) and the Lightning Network, allowing it to facilitate payments much faster than its alt coin rivals in the space.

Litecoin started the year at $4.51. Amazingly, it has surged to around $315 at the time of writing, for an eye-popping year-to-date gain of 6,921%. At current levels, Litecoin's market cap stands at $16.5 billion, making it the fifth-largest cryptocurrency in the industry.

Besides benefiting from the increased popularity of Bitcoin, Litecoin's gains this year have been sparked by a growing number of businesses in the gaming and website hosting industries that have started to accept it for online-based payments.

IOTA was founded in 2015 by David Sønstebo, Sergey Ivancheglo, Dominik Schiener, and Dr. Serguei Popov, and is overseen by the IOTA Foundation, a German non-profit firm. Its open-source blockchain platform differs from mainstream blockchain networks which use encrypted "blocks" to record transactions. Instead the firm's digital ledger, inspired by Internet of Things technology, is 'blockless,' and relies on a directed acyclic graph (DAG) or what the founders call the 'tangle,' allowing users to make transactions on the network for free.

Currently, the market capitalization of IOTA is $11.4 billion, making it the fifth-largest cryptocurrency in circulation. IOTA's closing price on December 31, 2016 was just 28 cents. It has since rallied 2,677% to around $4.14.

It surged to an all-time high of $5.44 on December 6 after the firm behind it said it was teaming up with a number of big tech firms, including Microsoft, Samsung (OTC:SSNLF) and Fujitsu (T:6702) on a blockchain-based marketplace that lets them sell data.

It's been an action-packed year in the cryptocurrency arena and there's no sign that interest or activity will be slowing down as we head into 2018. The opportunity remains for big gains if you do your due diligence. There remain multiple way to ride this wave while it is still in its early stages, particularly via the lesser known coins.

Indeed, some of the best options for seeing 10x gains next year will be in the 'alt-coin' space, via such cryptocurrencies as Neo, and Cardano as well as 2017 favorites Ripple and IOTA.

Really mad @ myself for not being more quicker to have secured some xmr on its early days. Still not too late looking at the level it's playing @ and what it aims to achieve. Am surprised Aeon ain't on this list.  ... (Read More)