Bitcoin, arguably the world's most popular cryptocurrency, has endured a rough 2018 so far. After enjoying a banner year in 2017, prices are down about 20% so far this year. 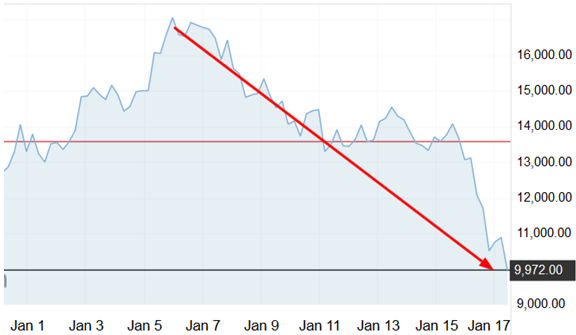 Besides its recent price correction, Bitcoin has also lost its dominance in the cryptocurrency market and now only holds a roughly 32% share, significantly lower than the 85% it held at its peak last year.

While it's still too early to proclaim that the Bitcoin party is over, it certainly feels as if future prospects are shifting from bright to dark for the world's most valuable digital coin. Below are the five factors that have the potential to lead to the demise of Bitcoin.

Right now, it takes an average time of around 200 minutes to confirm a single Bitcoin transaction, according to Blockchain.com. The average time for the month of December was a whopping 2,322 minutes, or roughly 38 hours, with market experts blaming the unprecedented interest in the digital currency for clogging up the blockchain network. 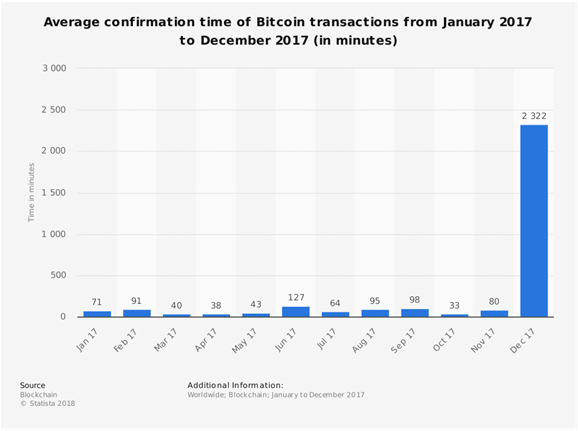 Slow transaction speeds have led to a number of splits in the original Bitcoin blockchain. In August, the blockchain was forced to split in two in an event known as a "hard fork." This led to the creation of a Bitcoin spinoff called Bitcoin Cash. Another fork occurred in October, birthing another Bitcoin offshoot called Bitcoin Gold, as the community attempted to take measures to increase the size of blocks on the network.

In comparison, Ripple’s network can settle up to 1,500 transactions every second. Other alt-coins also have the ability to enable transactions in seconds. For instance, an Ethereum transaction takes under 20 seconds to confirm.

However, those figures pale in comparison to traditional payment service giants like Visa (NYSE:V), which can confirm up to 24,000 transactions per second.

Skyrocketing transaction fees are fundamentally changing Bitcoin. Originally, one of Bitcoin's biggest selling points was that transaction payments would be fast, convenient, and most importantly - cheap.

"The cost of mediation increases transaction costs, limiting the minimum practical transaction size and cutting off the possibility for small casual transactions," wrote Bitcoin founder Satoshi Nakamoto in the white paper announcing the technology. Up until the beginning of 2017, Bitcoin fees tended to be well below $1. But in recent months, its growing popularity has outstripped the network's ability to cope with soaring demand.

As a result, the Bitcoin network as we know it today is radically different from what it was in its infancy. People are currently paying around $25 on average to make transactions using the digital currency, much higher than seen in the early days of 2017, according to data by BitInfoCharts. 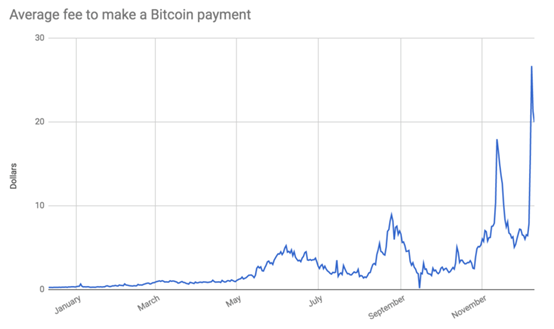 This development has led to a growing number of merchants and businesses—who are trying to realize Satoshi's vision of Bitcoin as a platform for "small casual transactions"—to begin shifting away from BTC, toward alternative networks and other cryptocoins.

South Korea, and just this past weekend India, were the latest countries to come out charging against Bitcoin trading, with South Korea's Justice Minister saying that the government was considering a “ban” on cryptocurrency trading. Many of India's largest private banks have suspended cryptocurrency exchange accounts tied to Bitcoin trade. Law enforcement agencies in South Korea also began investigating the country’s largest exchanges for tax evasion.

China effected a similar ban last year and has recently signaled that it will escalate its clampdown on cryptocurrency trading, targeting online platforms and mobile apps that offer exchange-like services.

Adding to fears over rising scrutiny from global regulators, a director at Germany's central bank said this week that any attempt to regulate cryptocurrencies must be on a global scale, as national or regional rules would be hard to enforce on a virtual, borderless community. 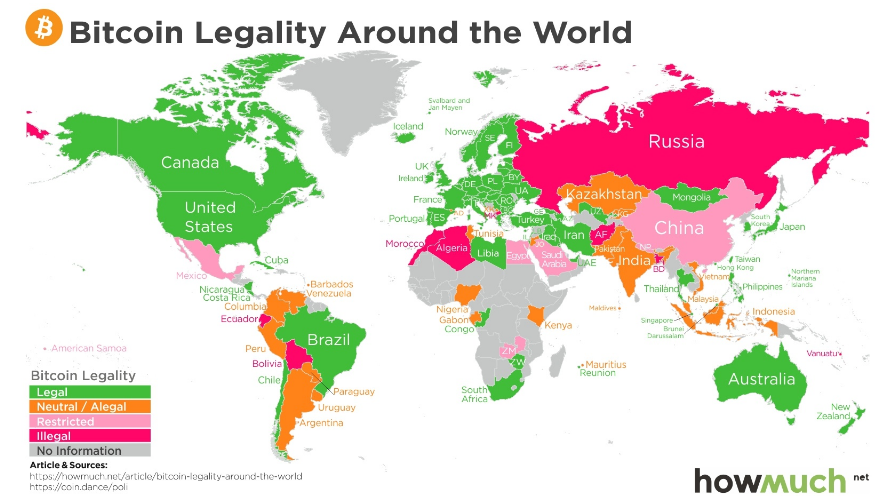 While the cryptocurrency has sidestepped similar obstacles in the past, a joint effort from the world's leading governments and regulatory authorities aimed at tackling the issue can potentially be the straw that finally breaks Bitcoin's back.

China’s government is planning to shut down Bitcoin miners as part of its latest crackdown on the cryptocurrency. On January 10, the Leading Group of Internet Financial Risks Remediation requested that local governments make an “orderly exit” from the industry.

The news is significant because China mines about 60% of the world’s Bitcoins, making it by far the biggest Bitcoin mining country in the world. The fact that the majority of Bitcoin mining occurs in China could bring chaos to the Bitcoin community. 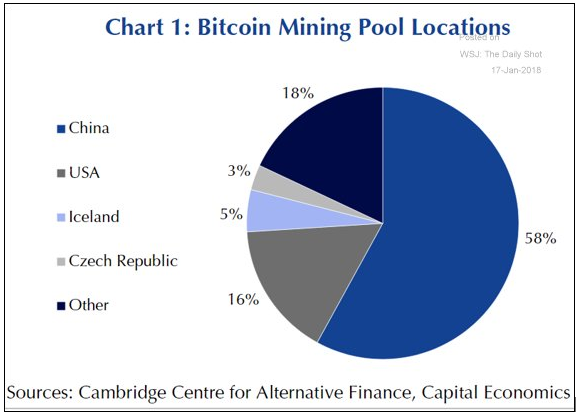 Another cause for concern: one Bitcoin mining session originally created 50 Bitcoins, then the number dropped to 25 and now it stands at roughly 12.5. Some forecast that by 2020, it will fall to 6.25 Bitcoins which will make mining unprofitable.

If Bitcoin isn’t mined, transactions aren’t approved and new Bitcoins aren’t produced. Over 16,800,000 Bitcoins have been mined as of January 13, getting close to the maximum amount of 21 million coins mined. Once all of the Bitcoins are mined it means supply can no longer grow.

Early on, one of the most appealing aspects about Bitcoin was its anonymity. That, however, seems to be changing rapidly, with regulators and tax authorities leaning toward forcing traders to disclose their true identities.

South Korea has just announced a major change to cryptocurrency trading, stating that everyone within the nation who trades will need to use their real name. Indeed, any scheme that reduces the anonymity of Bitcoin transactions could strip away much of the cryptocurrency’s appeal.

In November 2017, leading cryptocurrency exchange Coinbase suffered a major defeat at the hands of the U.S. Internal Revenue Service (IRS), when a California federal court ordered the exchange to turn over identifying records for all users who have bought, sold, sent, or received more than $20,000 through their accounts in a single year between 2013 and 2015.

The FBI has also made it very clear that they are watching Bitcoin very closely, and are getting better and better at finding the true identities of the people who use it for illegal activity. In light of the threat it poses to tax collection as well as mounting fears by law enforcement of its ability to fuel illicit markets, it would not be a surprise for authorities around the world to get even tougher on Bitcoin.

With all that being said, it doesn't appear that cryptos are going away anytime soon. Our bet is that in the long run, the blockchain technology on which Bitcoin is built will thrive, but the price of the coin itself will collapse, causing it to be supplanted by one of its more efficient, younger cousins. While no one knows for sure, we believe the altcoins that have the best shot at becoming the next market leader in place of Bitcoin are Ripple, Dash and NEM.

In recent months, Ripple has signed up several additional financial institutions to its blockchain network, bringing its clientele to more than 100, including big-name financials like Spain's Santander (NYSE:SAN), Italy's UniCredit (OTC:UNCFY), Switzerland's UBS Group (NYSE:UBS) and the UK's Standard Chartered (OTC:SCBFF). More financial institutions are reportedly set to join Ripple's growing global network this year, as it allows banks to settle cross-border payments faster and more cheaply than they currently do via conventional global payment networks.

The main appeal behind Ripple is that it connects banks, payment providers, digital asset exchanges and corporates via its distributed ledger network, RippleNet, to provide one frictionless experience to send money globally.

Dash has been in the headlines thanks to indications of growing acceptance by online vendors and even physical stores to accept it as a form of payment.So far, the cryptocurrency can be used at over 100 websites and 300 physical stores to purchase goods or services.

Dash offers all the same features as Bitcoin but also has advanced capabilities that solve many of the problems found in its older cousin, including instant transactions, which make it a more attractive payment option.

Finally, the NEM blockchain software is currently used in a commercial blockchain called Mijin, which is being tested by financial institutions and private companies in Japan and internationally. The developers claim that it will reduce banking institutional costs by 90% while making the banking industry more secure.

5 reasons this article is poorly researched! Addressing each of the points above in order. And I’m not even an expert, all info freely available on mediums such as twitter. 1) Segwit adoption/lightning network 2) see above 3) China ban when BTC @ $5k, so what, went on to smash that 4) You surely know that limiting supply pushes the price up not down. Plus, other countries will take up the slack 5)Bitcoin Private coming soon, tech can be adopted by BTC too. Investing.com, employ crypto experts that are in the know, or don’t run articles on crypto. Thanks (fully expects reply to be deleted)  ... (Read More)

Not heard of Bitcoin Private upcoming fork then?  ... (Read More)