Many investors have written off the tobacco industry. Smoking rates are declining and the popularity of ethical investing continues to escalate.

But opting out of this still viable sector would be premature. New growth opportunities in areas like vaping and cannabis have fundamentally changed the investment thesis. Indeed, the ARCA Tobacco Index has soared 40.8% so far this year, significantly outperforming the broader market. 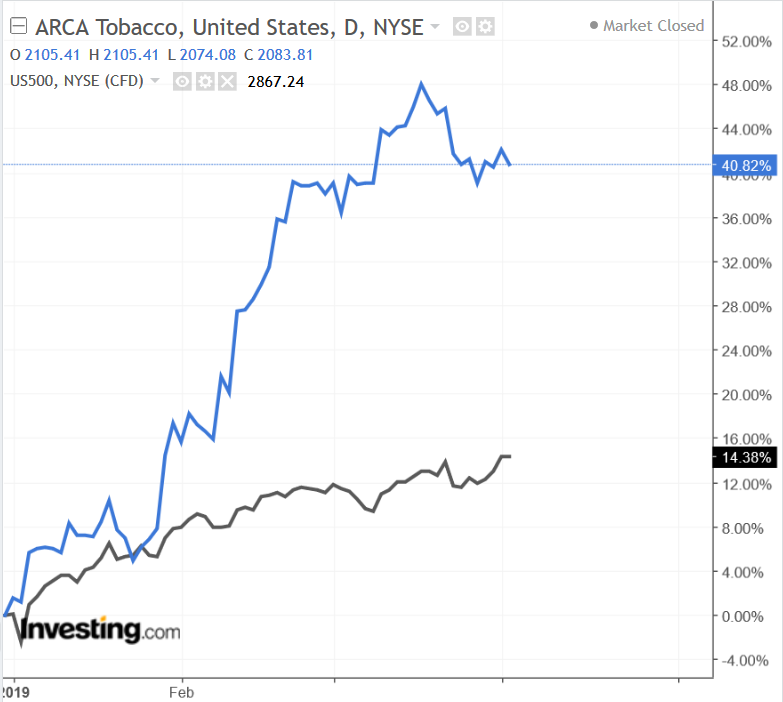 We've been watching three tobacco stocks that continue to have strong upside potential. One is a tobacco leaf specialist making a big bet on cannabis, the second is an up-and-coming name in the vaping industry, and the third is a cigarette giant currently trying to diversify its offerings.

In an effort to diversify, the company announced in February that it is entering the U.S. industrial hemp industry and taking controlling stakes in two privately held Canadian cannabis companies, Canada’s Island Garden, a licensed producer, and Goldleaf Pharm, an applicant to produce and sell medicinal cannabis. Pyxus issued a press release on Feb. 8 detailing the acquisitions, including its 75% equity stake in Canada’s Island Garden and 80% stake in GoldLeaf Pharm.

It also made an investment in a North-Carolina based company, Criticality, acquiring a 40% stake with the ability to increase that to 50% after March 31, 2020. Criticality is part of a state pilot program whose purpose is to extract cannabidiol (CBD) from industrial hemp, with a five-year goal of becoming a leader in CBD production and consumer products. 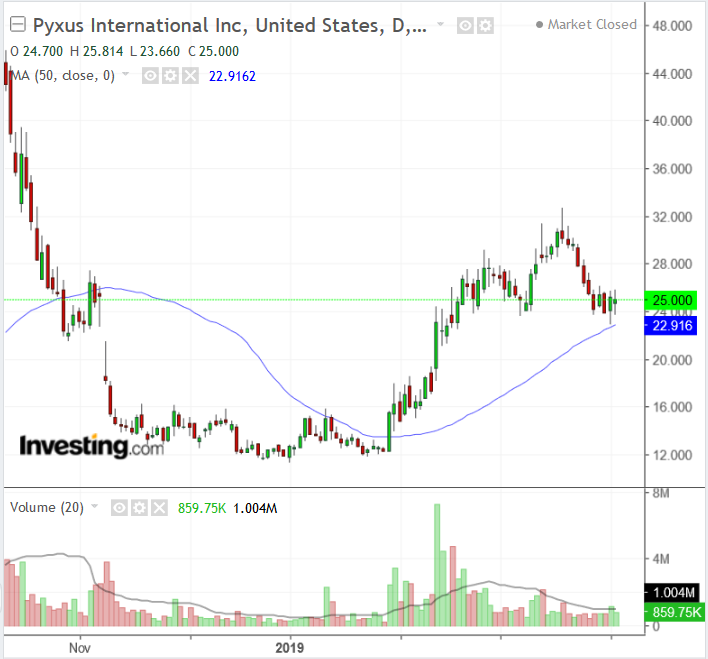 Pyxus, which has a market capitalization of approximately $227 million and has generated $1.2 billion year-to-date sales through the first three quarters of its 2018 fiscal year, has seen its stock surge 110% since the start of 2019. It ended Tuesday's session at $25.00.

Despite the strong start to the year, we continue to expect significant upside from here. The company is well positioned to take advantage of new opportunities in the cannabis and CBD industries.

Turning Point Brands (NYSE:TPB) aims to be the leader in next-generation tobacco products as well as the vape market. It has three product categories: Smokeless Products such as chewing tobacco, Smoking Products such as Zig-Zag cigarette paper, and NewGen, which markets vapor products under brand names such as Vaporfi, Vapor Beast, VaporSupply and VaporShark.

Though Juul—of which Altria has a 35% stake—is the big mover and shaker in the space, Turning Point Brands looks like an attractive vaping play as well. Fourth-quarter sales grew 28%, driven by 86% growth in NewGen's vaping devices and liquids division, which accounted for 47% of sales in the quarter.

“We are now launching our own set of proprietary products to expand our sales footprint in the fast-growing CBD market,” he added. Those are sold under its Nu-X brand. 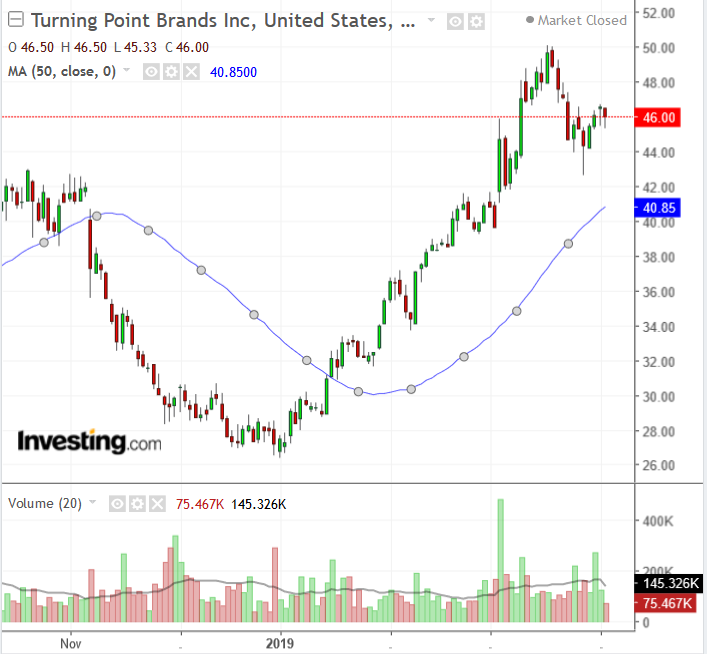 We believe the company is in prime position to become a leading name in the vaping industry, making it a promising bet going forward.

3. Altria: From Cigarettes To Vaping To Weed

Altria Group (NYSE:MO) is one of the world's largest producers and marketers of tobacco, cigarettes and related products. It controls the rights to Marlboro in the U.S., where the brand has 40% of the market.

However, with smoking on the decline in the U.S., Altria projects 4%-5% annual volume depreciation for this year through 2023. As a result, the company has been making moves to diversify away from its core tobacco business with investments in vaping, cannabis and alcohol.

In December, Altria took a 35% stake in Juul, which surpassed $1 billion in sales last year compared to just $200 million in 2017. Altria CEO Howard Willard expects e-vapor sales to grow at a 15%-20% compound annual rate, by volume, through 2023.

Altria also made a play to enter the marijuana space, when it invested $1.8 billion in Canadian marijuana cultivator Cronos Group (NASDAQ:CRON). Altria has a 45% stake, with an option to increase that to 55%. In addition, Altria has a 10% stake in Anheuser-Busch InBev (NYSE:BUD). 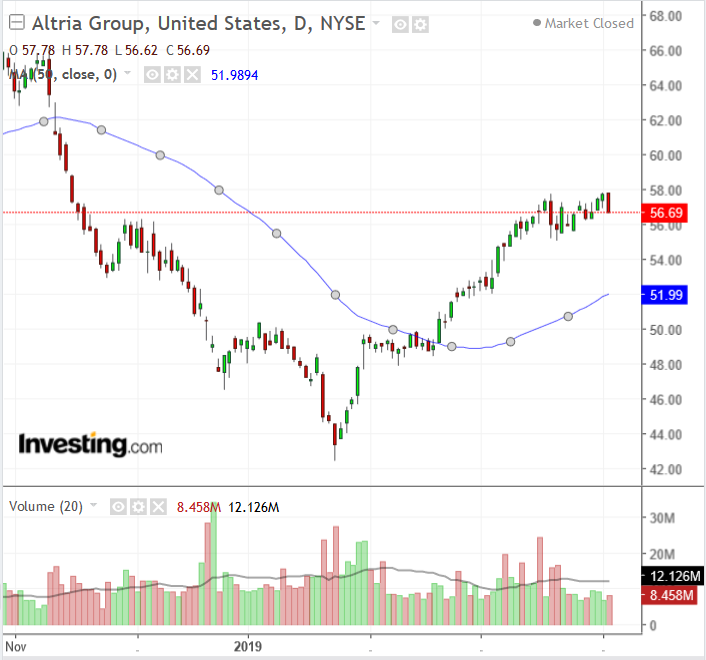 Altria shares, which ended at $56.69 yesterday, are up 14.7% in 2019. We see more upside in the months ahead as the company positions itself as a diversified play across the tobacco, vaping and cannabis spaces.