As the cannabis industry continues to wait for legalization of recreational marijuana on a national level in the US, analysts are keeping close watch on the next best thing—which states will be added to the growing list of jurisdictions that opt to legitimize weed and reap the sales tax benefits.

How this patchwork of regulatory acceptance unfolds holds strategic advantages for certain companies, something that investors in the sector should keep an eye on.

Take the latest report from financial analysis firm Cantor Fitzgerald as an example. Last week, it released a report that suggested five more states will likely legalize recreational cannabis in the next two years—Arizona, New Jersey, New York, Pennsylvania and Connecticut. Given the size of the populations of these states, the report went on to estimate that, combined, these five will expand the US cannabis market by approximately $3.5 billion.

This, according to the Cantor analysis, would give three companies with footprints in those states a strategic advantage to best take advantage of the legislation moves—Curaleaf Holdings (OTC:CURLF) (CSE:CURA), Green Thumb Industries (OTC:GTBIF) (CSE:GTII) and Cresco Labs (OTC:CRLBF) (CSE:CL).

They would not be the only beneficiaries. But let’s look at them first.

According to reports of the Cantor study, Curaleaf is positioned to expand operations in all five states. Also, last week, the Massachusetts-based grower, which is the largest vertically integrated cannabis operator in the United States, announced it struck a deal to acquire GR Companies, also commonly known as Grassroots, the largest privately-owned, vertically-integrated multi-state operator in the US. The deal will make Curaleaf the largest cannabis company by revenue in the US.

Curaleaf Holding shares gained about 2.5% at the end of last week on the news, but added to that yesterday, rising 7.6% on the day to close at $8.02 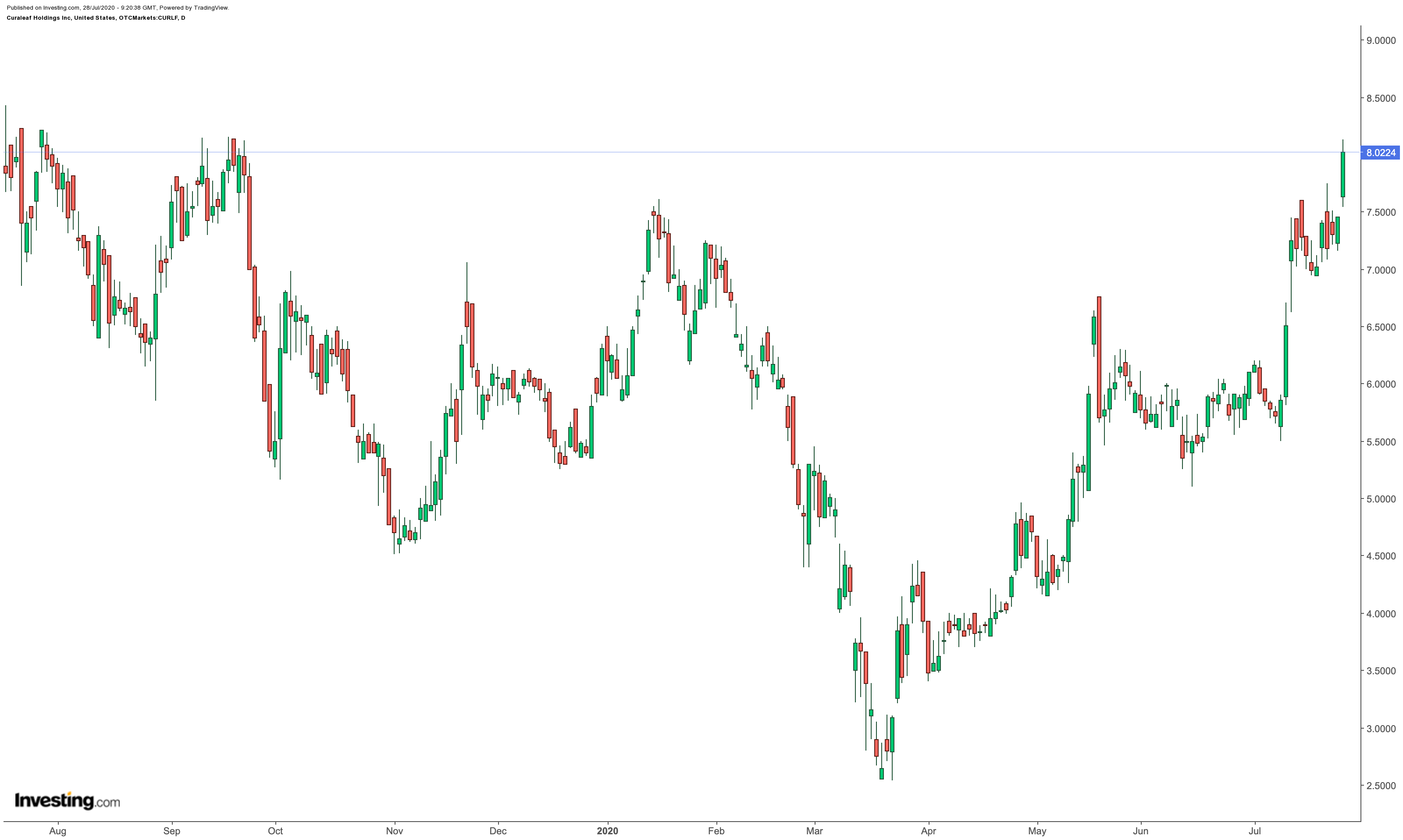 Curaleaf CEO Joseph Lusardi said the following in a statement about the acquisition:

“The successful acquisition of Grassroots marks Curaleaf’s expansion into new vertically integrated markets in the Midwest, firmly establishing our US market leadership position.”

The deal accelerates Curaleaf’s expansion into Illinois and Pennsylvania, which are among the largest and fastest-growing cannabis markets in the United States.

As for Green Thumb Industries, the Cantor report predicts expanded legalization could lead it to double its sales.

The Chicago-based medicinal and recreational cannabis grower has seen its stock mount a steady rise throughout the month of July, gaining more than 33%. Yesterday, the shares gained just over 5% on the day to close at $12.82.

While over at Cresco Labs, which already operates in Pennsylvania, New York and Arizona, the Cantor Fitzgerald report claims it could see its sales figures double as well.

Shares of Aphria (NASDAQ:APHA) (TSX:APHA) jumped about 12% on Monday in both Toronto and New York. Its performance on the Canadian exchange earned it the title of the best performer on S&P/TSX Composite on the day. The boost comes just two days before the Ontario-based cannabis grower reports its fourth-quarter earnings. 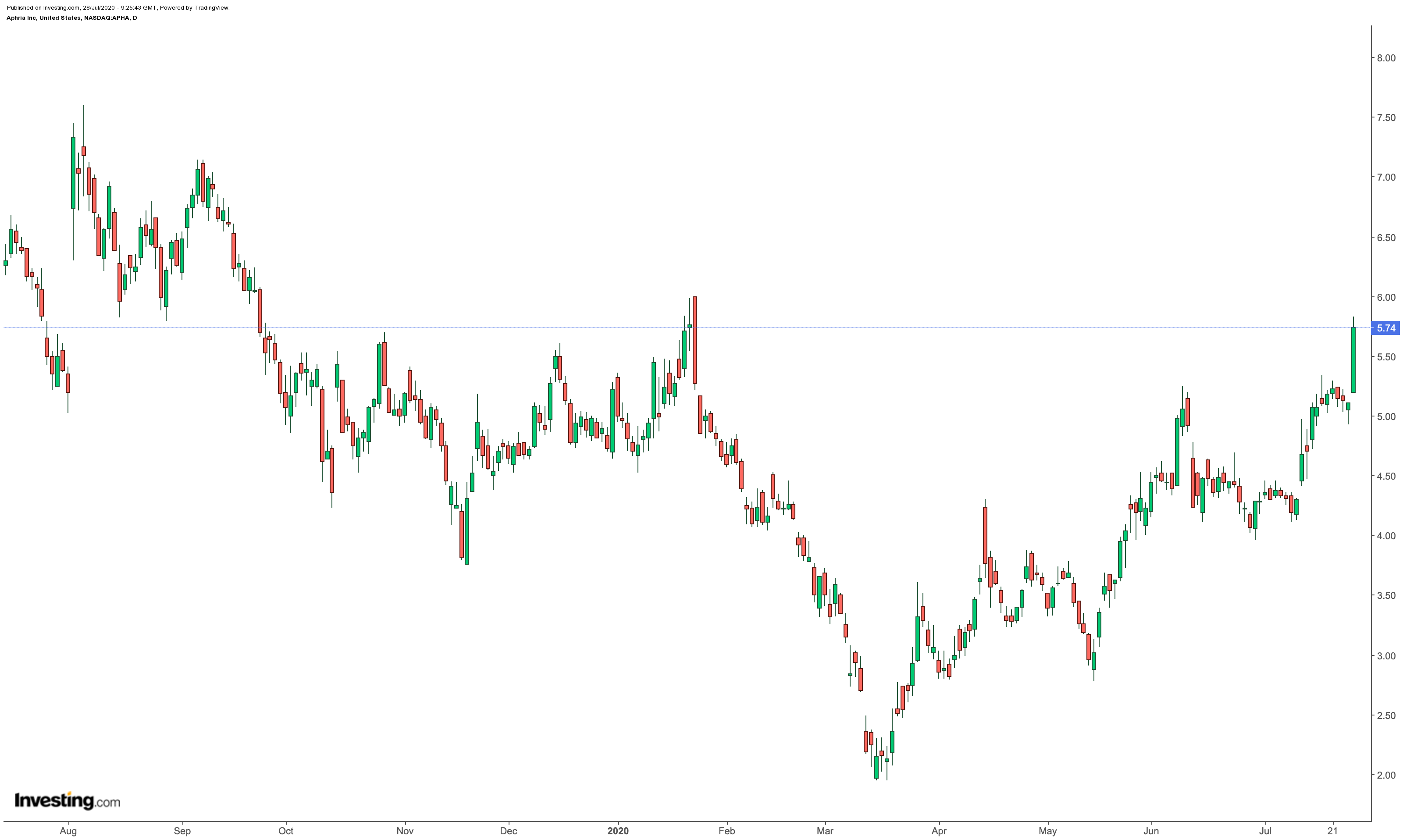 In the previous quarter, Aphria reported it about doubled its net revenues from the same period in the previous year, hitting just over C$144 million ($107.6 million) compared with C$73.6 million the year prior.

Aside from the fiscal performance during the early part of the pandemic, company executives will likely be quizzed on future plans, following reports earlier this month that merger talks with Aurora Cannabis (NYSE:ACB) (TSX:ACB) hit the skids.